This species is distributed from Fennoscandia to eastern Siberia; in addition there are isolated mountain populations in the Alps, Scotland, the Baltics, northeastern Poland and Hokkaidō. In Ireland, the Irish hare (''Lepus timidus hibernicus'') does not grow a white winter coat, is smaller in size, and lives on lowland pastures, coastal grasslands and salt marshes, not just in the mountains. The mountain hare has also been introduced to Iceland, Shetland, Orkney, the Isle of Man, the Peak District, Svalbard, Kerguelen Islands, Crozet Islands, and the Faroe Islands. In the Alps, the mountain hare lives at elevations from 700 to 3800 m, depending on biographic region and season.

thumb|left|Stuffed mountain hare, showing the winter pelage The mountain hare is a large species, though it is slightly smaller than the European hare. It grows to a length of , with a tail of , and a mass of , females being slightly heavier than males. They can live for up to 12 years. In summer, for all populations of mountain hares, the coat is various shades of brown. In preparation for winter most populations moult into a white (or largely white) pelage. The tail remains completely white all year round, distinguishing the mountain hare from the European hare (''Lepus europaeus''), which has a black upper side to the tail. The subspecies ''Lepus timidus hibernicus'' (the Irish mountain hare) stays brown all year and individuals rarely develop a white coat. The Irish hare may also have a "golden" variation, particularly those found on Rathlin Island. In the Faroe Islands, mountain hares turn grey in the winter instead of white. The winter-grey colour may be caused by downregulation of the agouti hair cycle isoform in the autumn moult. 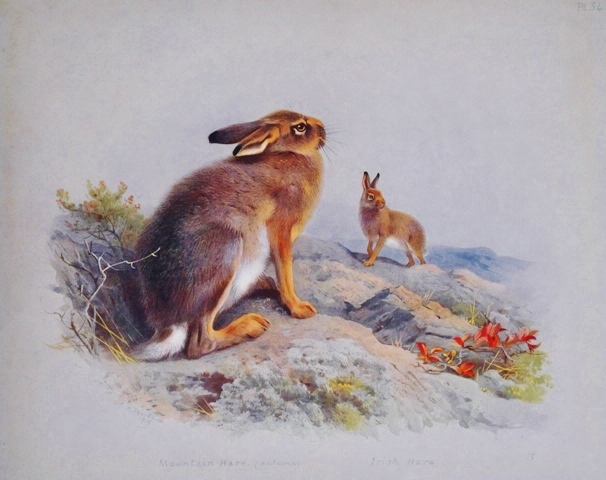 Studies have shown that the diet of the mountain hare varies from region to region. It seems to be somewhat dependent on the particular habitat that the population under study lives in. For example, in northern Scandinavia where snow may blanket the ground for many months, the hares may graze on twigs and bark. In areas where snowfall is rare, such as Ireland, grass may form the bulk of the diet. Given a choice, mountain hares in Scotland and Ireland seem to prefer feeding on grasses. One study looking at mountain hares on a coastal grassland environment in Ireland found that grasses constituted over 90% of the diet. This was higher than the percentage of grass in the diet of the European rabbit (''Oryctolagus cuniculus'') that inhabited the same environment. The mountain hare is regionally the favourite prey of the golden eagle and may additionally be preyed on by Eurasian eagle-owls and red foxes. Stoats may prey on young hares.