Click Here for Items Related To - Ministry of Defence (Spain)

Since the first origins of Spain, the monarchy has been the main form of government. That is the main reason why the first government departments appeared in the 18th century because for centuries, the monarch controlled all the power. At the beginning, the King controlled the military through its Council of State (Spain), Council of State which was divided in different sections dedicated to advise the King in the different areas of government.

The hesitations continue regarding the advisory body (the Overseas Council alternates with the Royal Council and the Advisory Board) the vacillations also occur in terms of the dependence of the Directorate that passes to the Ministry of Foreign Affairs (Spain), Ministry of State in 1854, it is added to the Ministry of Development (Spain), Development in 1856, to return to State a few months later and depends on the Ministry of War from 1858 until the creation of the Overseas Ministry by Royal Decree of 20 May 1863. It subsists until the loss of those imperial provinces and is definitively suppressed by Royal Decree of 15 April 1899.

At the beginning of the 20th century, the Spanish Air Force, Air Force started to make its firsts steps and at the very start they were just the air branch of the Spanish Army, Army and later it was also created a Naval Air Force subordinated to the Spanish Navy, Navy. During the Spanish Civil War, Civil War, the armed forces split into two sides: the republican and the nationalist. In the republican side, there were two main ministries: the Ministry of War and the Ministry of the Navy and Aire Force; in the national side, there were only one unified ministry, the Ministry of National Defence that had all the competences over the three branches. After the Civil War, the francoist regime divided again the former Ministry of National Defence intro three ministries: Ministry of the Army, Ministry of the Navy and the new Ministry of the Air Force (Spain), Ministry of the Air Force (created in 1939). This three military departments disappeared in 1977 when they merged into the current Ministry of Defence. This new Ministry of Defence established its headquarters in a building belonged to the Ministry of Culture and the three headquarters of the military ministries were destined to hold the main headquearters of each military branch. The position of Under Secretary of Defence was created in 1977. The new military organization was established in 1984 with the JEMAD as the Chief Operative of the Armed Forces and the Prime Minister of Spain, Prime Minister (through the Defence Minister) as ''de facto'' leader of the Armed Forces. The Monarchy of Spain, Monarch remained as the symbolic commander-in-chief and the position of Secretary of State for Defence (Spain), Secretary of State for Defence was created too. In 2020, the National Intelligence Center returned to the department's structure with Paz Esteban López as its first female Director of the National Intelligence Centre (Spain), director. 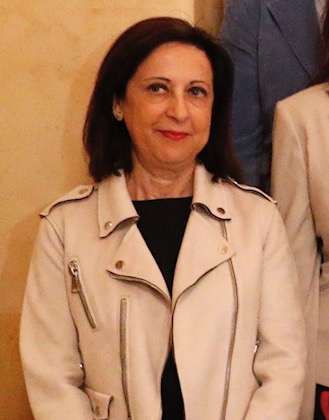 * The National Intelligence Centre. * The Instituto Nacional de Técnica Aeroespacial, National Institute for Aerospace Technology. * The Institute for Housing, Infrastructure and Equipment of the Defense. * The Social Institute of the Armed Forces. * The Superior Council for Military Sport. * The Military Observatory for Equality between Women and Men in the Armed Forces. * The Military Archbishopric of Spain.