Middle High German (abbreviated ''MHG'', german: Mittelhochdeutsch, abbr. ') is the term for the form of German spoken in the High Middle Ages. It is conventionally dated between 1050 and 1350, developing from Old High German and into Early New High German. High German is defined as those varieties of German which were affected by the Second Sound Shift; the Middle Low German and Middle Dutch languages spoken to the North and North West, which did not participate in this sound change, are not part of MHG. While there is no ''standard'' MHG, the prestige of the
Hohenstaufen The Hohenstaufen ( , , ), also called Staufer, was a noble dynasty of unclear origin that rose to rule the Duchy of Swabia from 1079 and to List of German Kings and Emperors, royal rule in the Holy Roman Empire during the Middle Ages from 1138 u ...
court gave rise in the late 12th century to a supra-regional literary language (') based on Swabian, an Alemannic dialect. This historical interpretation is complicated by the tendency of modern editions of MHG texts to use ''normalised'' spellings based on this variety (usually called "Classical MHG"), which make the written language appear more consistent than is actually the case in the manuscripts. Scholars are uncertain as to whether the literary language reflected a supra-regional ''spoken'' language of the courts. An important development in this period was the ', the eastward expansion of German settlement beyond the line which marked the limit of Old High German. This process started in the 11th century, and all the East Central German dialects are a result of this expansion. "Judeo-German", the precursor of the
Yiddish Yiddish (, or , ''yidish'' or ''idish'', , ; , ''Yidish-Taytsh'', ) is a High German languages, High German–derived language historically spoken by Ashkenazi Jews. It originated during the 9th century in Central Europe, providing the nascent ... 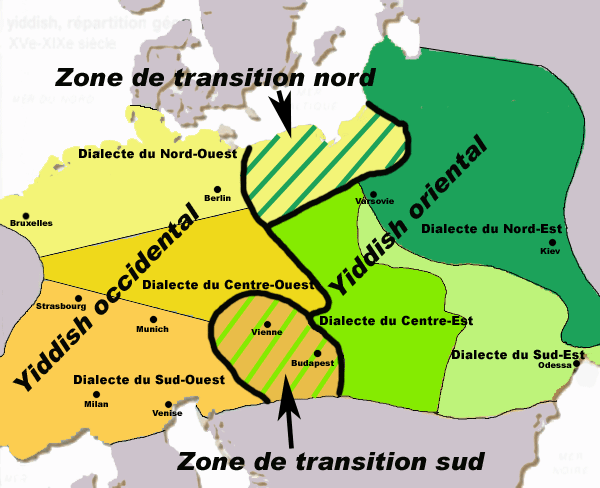 language, sees attestation in the 12th–13th centuries, as a variety of Middle High German written in Hebrew characters.

The Middle High German period is generally dated from 1050 to 1350. An older view puts the boundary with (Early) New High German around 1500. There are several phonological criteria which separate MHG from the preceding Old High German period: * the weakening of unstressed vowels to : OHG ', MHG ' ("days") * the full development of Umlaut and its use to mark a number of morphological categories * the devoicing of final stops: OHG ' > MHG ' ("day") Culturally, the two periods are distinguished by the transition from a predominantly clerical written culture, in which the dominant language was Latin, to one centred on the courts of the great nobles, with German gradually expanding its range of use. The rise of the
Hohenstaufen The Hohenstaufen ( , , ), also called Staufer, was a noble dynasty of unclear origin that rose to rule the Duchy of Swabia from 1079 and to List of German Kings and Emperors, royal rule in the Holy Roman Empire during the Middle Ages from 1138 u ...
dynasty in Swabia makes the South West the dominant region in both political and cultural terms. Demographically, the MHG period is characterised by a massive rise in population, terminated by the demographic catastrophe of the Black Death (1348). Along with the rise in population comes a territorial expansion eastwards ('), which saw German-speaking settlers colonise land previously under Slavs, Slavic control. Linguistically, the transition to Early New High German is marked by four vowel changes which together produce the phonemic system of modern German, though not all dialects participated equally in these changes: * Diphthongisation of the long high vowels > : MHG ' > NHG ' ("skin") * Monophthongisation of the high centering diphthongs > : MHG ' > NHG ' ("hat") * lengthening of stressed short vowels in open syllables: MHG ' > NHG ' ("say") * The loss of unstressed vowels in many circumstances: MHG ' > NHG ' ("lady") The centres of culture in the ENHG period are no longer the courts but the towns. 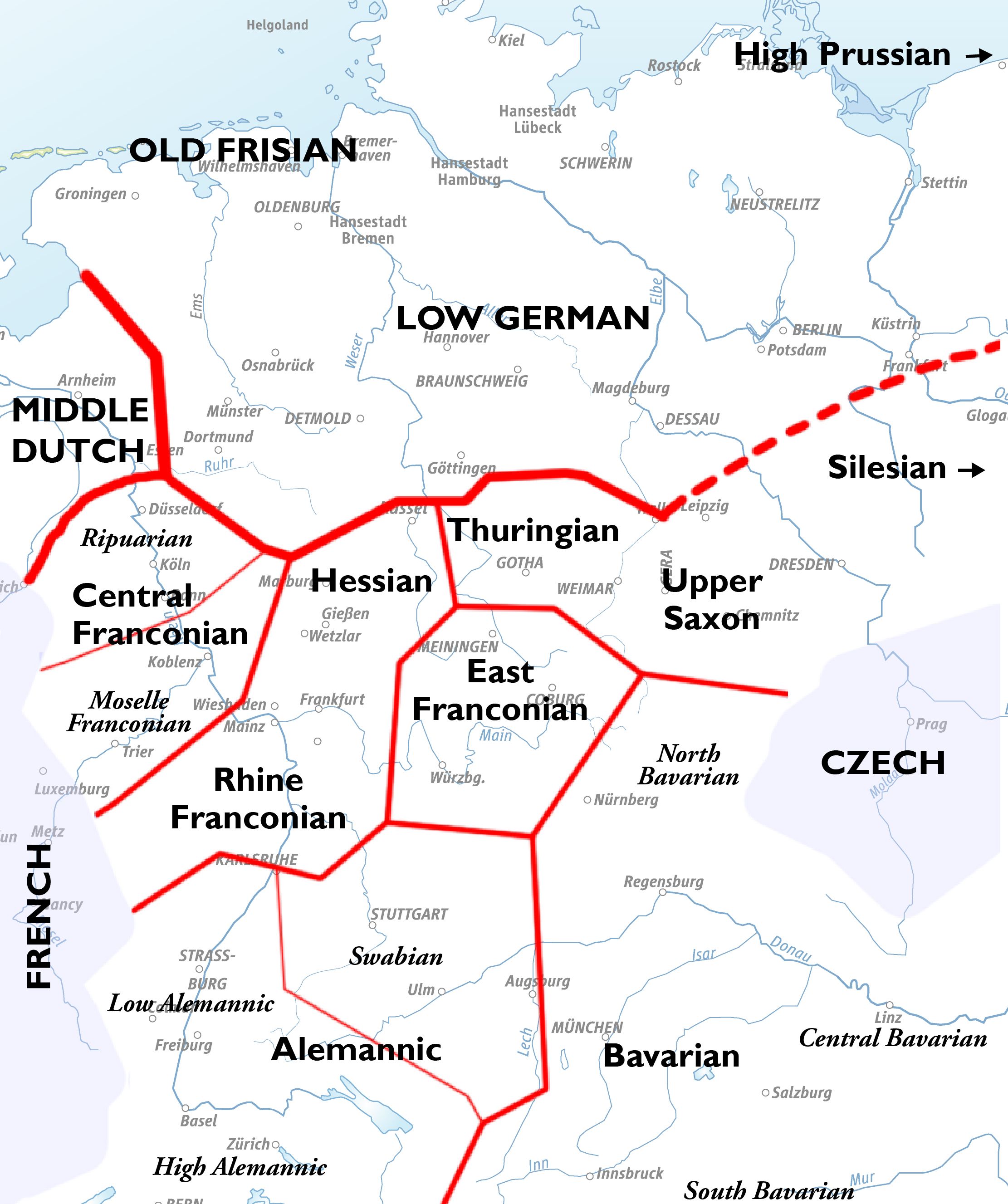 Middle High German texts are written in the Latin alphabet. There was no standardised spelling, but modern editions generally standardise according to a set of conventions established by Karl Lachmann in the 19th century. There are several important features in this standardised orthography which are not characteristics of the original manuscripts: *the marking of vowel length is almost entirely absent from MHG manuscripts. *the marking of Germanic umlaut, umlauted vowels is often absent or inconsistent in the manuscripts. *a curly-tailed z ( or ) is used in modern handbooks and grammars to indicate the or -like sound which arose from Germanic languages, Germanic in the High German consonant shift. This character has no counterpart in the original manuscripts, which typically use or to indicate this sound. *the original texts often use and for the semi-vowels and . A particular problem is that many manuscripts are of much later date than the works they contain; as a result, they bear the signs of later scribes having modified the spellings, with greater or lesser consistency, in accord with conventions of their time. In addition, there is considerable regional variation in the spellings that appear in the original texts, which modern editions largely conceal.

The charts show the vowel and consonant systems of classical MHG. The spellings indicated are the standard spellings used in modern editions – there is much more variation in the manuscripts.

Notes: # Not all dialects distinguish the three unrounded mid front vowels. # It is probable that the short high and mid vowels are lower than their long equivalents, as in Modern German, but this is impossible to establish from the written sources. # The found in unstressed syllables may indicate or schwa .

# Precise information about the articulation of consonants is impossible to establish, and will have varied between dialects. # In the plosive and fricative series, where there are two consonants in a cell, the first is fortis and lenis, fortis the second lenis. The voicing of lenis consonants varied between dialects. # MHG has long consonants, and the following double consonant spellings indicate not vowel length as in Modern German orthography, but rather genuine double consonants: pp, bb, tt, dd, ck (for ), gg, ff, ss, zz, mm, nn, ll, rr. # It is reasonable to assume that had an allophone after back vowels, as in Modern German.

The possessive pronouns ' are used like adjectives and hence take on adjective endings following the normal rules.

The inflected forms of the article depend on the number, the case and the gender of the corresponding noun. The definite article has the same plural forms for all three genders. Definite article (strong) The instrumental case, only existing in the neuter singular, is used only with prepositions: ', ', etc. In all the other genders and in the plural it is substituted with the dative: ', ', '.

Verbs were conjugated according to three moods (realis mood, indicative, subjunctive mood, subjunctive (conjunctive) and imperative mood, imperative), three persons, two grammatical number, numbers (singular and plural) and two tenses (present tense and preterite) There was a present participle, a past participle and a verbal noun that somewhat resembles the Latin gerund, but that only existed in the genitive and dative case, dative cases. An important distinction is made between Germanic strong verb, strong verbs (that exhibited Indo-European ablaut, ablaut) and Germanic weak verb, weak verbs (that didn't). Furthermore, there were also some irregular verbs.

The text is the opening of Hartmann von Aue's ''Iwein'' () Commentary: This text shows many typical features of Middle High German poetic language. Most Middle High German words survive into modern German in some form or other: this passage contains only one word (' 'say' 14) which has since disappeared from the language. But many words have changed their meaning substantially. ' (6) means 'state of mind' (cognates with ''mood''), where modern German ' means courage. ' (3) can be translated with 'honour', but is quite a different concept of honour from modern German '; the medieval term focusses on reputation and the respect accorded to status in society.

The text is the opening strophe of the ' ().

Commentary: All the MHG words are recognizable from Modern German, though ' ("tale") and ' ("warrior") are archaic and ' ("praiseworthy") has given way to '. Words which have changed in meaning include ', which means "strife" or "hardship" in MHG, but now means "work", and ' ("festivity") which now, as ', has the narrower meaning of "wedding".

The text is from the opening of Hartmann von Aue's ''Erec (poem), Erec'' (). The manuscript (the Ambraser Heldenbuch) dates from 1516, over three centuries after the composition of the poem.

s edition, which is in HTML as well as the preceding formats.