Michelangelo di Lodovico Buonarroti Simoni (; 6 March 1475 – 18 February 1564), known simply as Michelangelo (), was an Italian sculptor, painter, architect and poet of the High Renaissance born in the Republic of Florence, who exerted an unparalleled influence on the development of Western art. His artistic versatility was of such a high order that he is often considered a contender for the title of the archetypal Renaissance man, along with his rival, the fellow Florentine, Leonardo da Vinci. Several scholars have described Michelangelo as the greatest artist of his age and even as the greatest artist of all time. A number of Michelangelo's works of painting, sculpture and architecture rank among the most famous in existence. His output in these fields was prodigious; given the sheer volume of surviving correspondence, sketches and reminiscences, he is the best-documented artist of the 16th century. He sculpted two of his best-known works, the ''Pietà'' and ''David'', before the age of thirty. Despite holding a low opinion of painting, he also created two of the most influential frescoes in the history of Western art: the scenes from Genesis on the ceiling of the Sistine Chapel in Rome, and ''The Last Judgment'' on its altar wall. His design of the Laurentian Library pioneered Mannerist architecture. At the age of 74, he succeeded Antonio da Sangallo the Younger as the architect of St. Peter's Basilica. He transformed the plan so that the western end was finished to his design, as was the dome, with some modification, after his death. Michelangelo was the first Western artist whose biography was published while he was alive. In fact, two biographies were published during his lifetime. One of them, by Giorgio Vasari, proposed that Michelangelo's work transcended that of any artist living or dead, and was "supreme in not one art alone but in all three". In his lifetime, Michelangelo was often called ''Il Divino'' ("the divine one"). His contemporaries often admired his ''terribilità''—his ability to instil a sense of awe. Attempts by subsequent artists to imitate Michelangelo's impassioned, highly personal style resulted in Mannerism, the next major movement in Western art after the High Renaissance.

Michelangelo was born on 6 March 1475 in Caprese, known today as Caprese Michelangelo, a small town situated in Valtiberina, near Arezzo, Tuscany. For several generations, his family had been small-scale bankers in Florence; but the bank failed, and his father, Ludovico di Leonardo Buonarroti Simoni, briefly took a government post in Caprese, where Michelangelo was born. At the time of Michelangelo's birth, his father was the town's judicial administrator and ''podestà'' or local administrator of Chiusi della Verna. Michelangelo's mother was Francesca di Neri del Miniato di Siena. The Buonarrotis claimed to descend from the Countess Mathilde of Canossa—a claim that remains unproven, but which Michelangelo believed. Several months after Michelangelo's birth, the family returned to Florence, where he was raised. During his mother's later prolonged illness, and after her death in 1481 (when he was six years old), Michelangelo lived with a nanny and her husband, a stonecutter, in the town of Settignano, where his father owned a marble quarry and a small farm. There he gained his love for marble. As Giorgio Vasari quotes him: 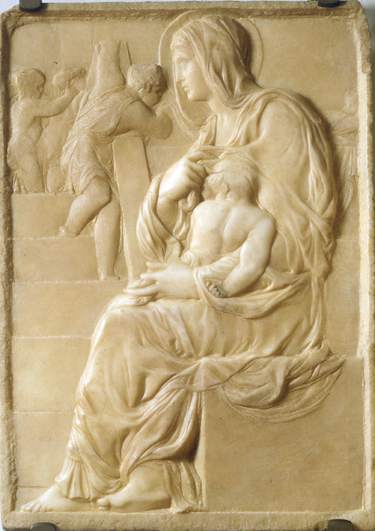 As a young boy, Michelangelo was sent to Florence to study grammar under the Humanist Francesco da Urbino. However, he showed no interest in his schooling, preferring to copy paintings from churches and seek the company of other painters. The city of Florence was at that time Italy's greatest centre of the arts and learning. Art was sponsored by the Signoria (the town council), the merchant guilds, and wealthy patrons such as the Medici and their banking associates. The Renaissance, a renewal of Classical scholarship and the arts, had its first flowering in Florence.