Mayberry, North Carolina is a fictional community that was the setting for two popular American television sitcoms, ''The Andy Griffith Show'' and ''Mayberry R.F.D.'' Mayberry was also the setting for a 1986 reunion television movie titled ''Return to Mayberry''. Mayberry is said to be based on Andy Griffith's hometown of Mount Airy, North Carolina. Mount Airy is also known as Mayberry and called by both names by its residents.

According to show episodes, the community of Mayberry was named for fictional founder Lord Mayberry. Purportedly, Andy Griffith himself chose the name of the fictional community. Griffith, however, told Larry King in 2003 that Artie Stander is the person who thought of the name Mayberry; Stander was one of the show's creators and writers. "Mayberry" is mentioned many times in television shows such as ''Cheers, House, M.D., Criminal Minds, Supernatural, How I Met Your Mother'', and ''Scrubs''. According to the episode "The Battle of Mayberry", the town was almost named Taylortown in honor of Colonel Carleton Taylor, who was one of the first settlers in the town.

Mayberry had one traffic light and little in the way of indigenous crime with the exception perhaps of moonshining and bootlegging. Speeding was also mentioned in the area, like that on Highway 6 in the fourth season episode "Barney's Sidecar". Out-of-town bank robbers, scam artists, escaped convicts, and vagrants occasionally found their way to Mayberry. The county and the town share the same name and jurisdiction. In episode 44 "Sheriff Barney", the mayor of nearby Greendale relates that Mayberry County has had the lowest crime rate in the state for two years in a row under Sheriff Taylor. The town only had one long-distance telephone line, as referenced in the episode "Man in a Hurry", that two old ladies shared each Sunday preventing others from using the telephone. In the opening scene of season 8, episode 30 (the last episode), a sign at the railroad station lists the population and elevation of Mayberry: :Population: 5,360 :Elevation: 671 However, this conflicts with the comment made by choir director John Masters to Andy Taylor, that "there's got to be a decent tenor in a town of two-thousand people" in the episode ''The Song Festers'' - season 4, episode 20. And, in season 7, episode 23 ("The Statue"), Howard Sprague refers to a population of 1,800. 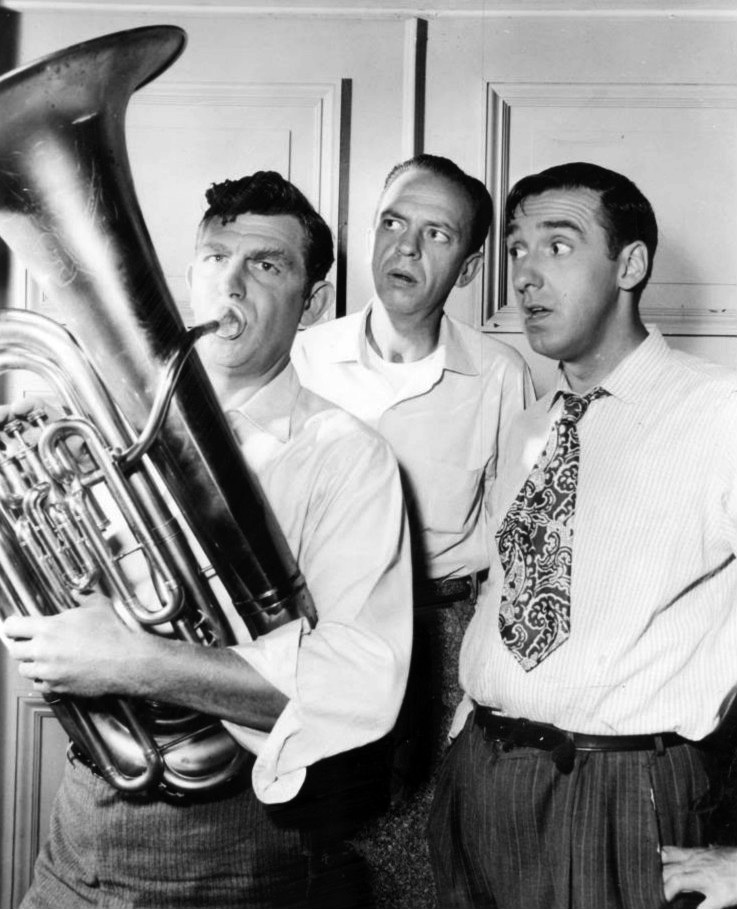 Many assume Mayberry was loosely based on Andy Griffith's hometown of Mount Airy, North Carolina, but actually, Griffith has indicated that nearby Pilot Mountain, also in Surry County, North Carolina, inspired him in creating the town. Pilot Mountain likely was the inspiration for the fictional town of "Mount Pilot", a nearby larger town in relation to Mayberry, often referred to and occasionally visited by the characters in ''The Andy Griffith Show''. The county seat of Surry County is in Dobson; thus, this is the location of the nearest courthouse to Mount Airy. One episode has a fictional nearby location - "Pierce County". Another episode has Barney Fife referring to Sheriff Taylor and himself as "the law west of Mount Pilot". Other place names used in the show refer to actual places in North Carolina, such as Raleigh—which was also often called "Capital City" – Siler City, Greensboro, Winston-Salem, Chapel Hill, Stokes County, Elm City and Charlotte. One of the stars of the show, Frances Bavier (who played Aunt Bee) retired to Siler City in real life. In episode 248 "A Girl For Goober", the towns of Manteo and Toast are mentioned. Andy Griffith owned a home in Manteo (on North Carolina's Atlantic coast), and Toast is about two miles outside of Mt. Airy in Surry County. Stokes County, which borders Surry County to the east, is mentioned as the location of Myers Lake in episode 140 "Andy And Helen Have Their Day". In episode 62 "Cousin Virgil", the bus picks up Barney's cousin in Currituck. A Currituck County is located in eastern North Carolina. In episode 17 "Alcohol And Old Lace" while looking for moonshine stills, Barney suggests looking into Fancy Gap, Virginia, a town just across the state line from Mt. Airy. In episode 60 "Bookie Barber", Aunt Bee states that Floyd's Barber Shop has received phone calls from as far away as Morehead City. In episode 136 "Opie's Fortune", a man from Bannertown lost $50. Bannertown is a few miles from Mt. Airy in Surry County. In episode 68 "Barney Mends a Broken Heart", the towns of Harnett and Yancey are mentioned. Both a Harnett County and a Yancey County are in North Carolina. In episode 3 "The Guitar Player" played by James Best, who later played Sheriff Rosco P. Coltrane on ''The Dukes of Hazzard,'' Best's character Jim Lindsey buys his guitar picks in Winston-Salem, which is actually the nearest big city to Mount Airy (37 miles). In Season 4, Episode 3 of Gomer Pyle, U.S.M.C., (“Corporal Carol”) Gomer tells the corporal (played by Carol Burnett) that he is from Mayberry, North Carolina, “just a little bitty town about 30 miles outside of Raleigh“.

Mayberry originated in an episode of ''The Danny Thomas Show'' and was the setting for ''The Andy Griffith Show'', ''Mayberry RFD'', and the 1986 reunion movie ''Return to Mayberry''.

* The Mayberry Courthouse – Was where Sheriff Andy Taylor and Deputy Barney Fife maintained law and order. It also contained the county jail—two cells, a back room, and the mayor's office upstairs. No inside stairs are seen, although there is an outside fire escape. Aside from Andy Taylor's home, this was the main setting for ''The Andy Griffith Show''. * Mayberry Security Bank – The town's only bank, was often subject to robberies. It contains a large vault, and its only security guard is a senile man named Asa, who is constantly sleeping and whose fall-apart dilapidated gun is filled with moldy bullets. An interesting plot hole about the vault: in one episode, the vault combination was lost so an extra door was put in the vault. But in another episode, Barney Fife gets himself locked in the safe and only escapes by breaking the wall between the vault and the next-door beauty parlor. * Mayberry Union High School – The high school from which Andy and Barney graduated in 1948. In the episode "The Return of Barney Fife", which originally aired 01/10/1966, Barney and Andy attend their high school reunion. Behind the small orchestra playing during the dance hangs a banner that reads "Welcome Class of '48". However, in the episode "Class Reunion", which originally aired 02/04/1963 Andy and Barney organize a class reunion in which the banner reads "Class of '45". * U.S. Post Office – The town's only post office.

* Taylor House – Humble, yet handsome, two-story frame house at 332 Maple Road (though once noted by Barney to be on Elm St.), a short walk from the courthouse. Notable features include a front porch perfect for conversation and guitar playing, a back porch with an extra refrigerator, and a living room with a high ceiling and rough-hewn (rusticated ashlar) stone fireplace. * Mrs. Mendalbright's Rooming House – Barney Fife boards upstairs and his landlady is Mrs. Mendalbright. * Thelma Lou's House – The home of Thelma Lou, Barney's girlfriend. * Helen Crump's House – The home of Helen Crump, Andy's girlfriend and Opie's teacher. * Mrs. Wiley's House – The home of Mrs. Wiley, which is frequently subject to parties, two of which were crashed by Ernest T. Bass. * The Rimshaw House – The "haunted" house of the deceased Old Man Rimshaw where Otis Campbell and Big Jack Anderson were running a still.

* All Souls Church – also known as Community Church – Was the non-denominational Protestant church the Taylor's and other townspeople attended in Mayberry. It could seat around 40 people and a choir. The church hosted an annual picnic and an annual bazaar. * The Grand Theatre – The movie theater where Andy and Barney often took their girlfriends (Helen Crump and Thelma Lou, respectively) on dates.

* Emmett's Fix-it Shop – Handyman Emmett Clark's business replaced Floyd's when Howard McNear left the show. * Fleur De Lis Beauty Salon – Located just down Main Street from the Mayberry Courthouse and Walker's Drugstore. * Floyd's Barber Shop – Run by the scatterbrained Floyd Lawson, it was the main center of action in Mayberry. On any given day, it was not unusual to see many of the town's important figures, including the mayor and the sheriff, gathered here. * Monroe's Funeral Parlor – Owned by city councilman Orville Monroe who also repairs TV's at Monroe's TV Repair when the funeral business is slow. * Simmons Seeds – Run by Mr. Simmons. * F. Wakefield Beauty Salon – Located on Main Street across Luken's, where Aunt Bee and Clara Johnson get their hair done. * Walker's Drug Store – This was the town drug store and soda shop owned by Fred Walker. His niece Ellie (Elinor Donahue), also a pharmacist, worked there for a while and was Andy's first girlfriend on the show. In the early episodes, characters often talked about "going to Walker's for an ice cream soda." * Wally's Filling Station – The town's only known gas station, it employed cousins Gomer and Goober Pyle. It also served as the town's auto repair garage.

* Bluebird Diner – This was the restaurant where Barney was often seen calling to talk to his secret love, the enigmatic waitress "Juanita". A man named Frank owns the diner. It is located on the outskirts of Mayberry, near Myer's Lake. Mount Airy has a family-owned restaurant called the Bluebird Diner. * Mayberry Diner – The main restaurant in Mayberry that Barney and Andy frequent for its inexpensive daily specials. * Morelli's – A more upscale restaurant outside of town. Known for its special dinner, the pounded steak supper, "pounded on the premises." * Snappy Lunch – Diner named after a real eatery that still serves lunch in Mount Airy, North Carolina.

* Myer's Lake – As seen in the opening credits of ''The Andy Griffith Show'', it was the place Andy and Opie Taylor went fishing, and where Barney often drove with Thelma Lou for their "romantic getaways". The fictional lake was mentioned on the show as being located in Stokes County, North Carolina. Stokes County is a real county next to Surry County where Andy Griffith was born and raised. Franklin Canyon Park was used for filming.

Due to the success and fame of the television show, "Mayberry" has been used as a term for both idyllic small-town life and for rural simplicity (for both good and ill). In a song by Rascal Flatts titled "Mayberry", the town is mentioned: "Well I miss Mayberry sitting on the porch drinking ice cold Cherry Coke where everything is black and white." In the song called "Grandpa's Interview" on the Neil Young album ''Greendale'': "Shows with love and affection, Like mama used to say, A little Mayberry livin', Can go a long way." Home, the second episode of the fourth season of the television show The X-Files, makes frequent references to Mayberry because of the size of the town the investigation takes place. In the song "High-Tech Redneck" on the George Jones album of the same name, the town is mentioned: "He's a high-tech redneck, Mayberry meets Startrek." In the fifth episode of the seventh season of Desperate Housewives, Doug refers to Wisteria Lane as ‘Mayberry’ due to the apparent idyllic suburbs where the show is set.