Masuria (, german: Masuren, Masurian: ''Mazurÿ'') is a historical region in northeastern Poland, famous for its 2,000 lakes. Masuria occupies much of the Masurian Lake District. Administratively, it is part of the Warmian-Masurian Voivodeship (administrative area/province). Its biggest city, often regarded as its capital, is Ełk (Elk). The region covers a territory of some 10,000 km2 which is inhabited by approximately 500,000 people. 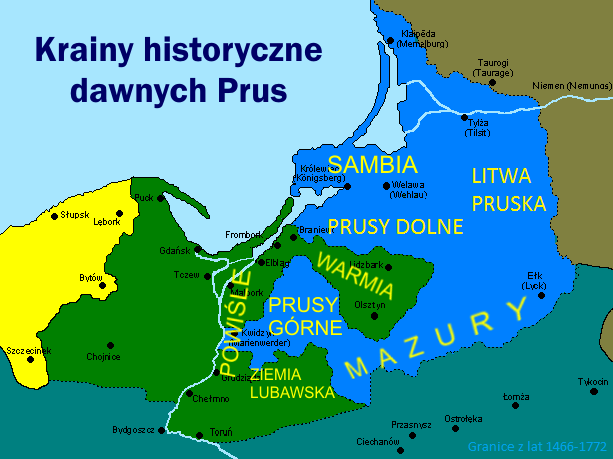 The first known people in today's Mazuria were East Germanic tribes, such as the Scirii. Finds from gravesites around Soldau and Neidenburg have become known as the Soldau-Neidenburg group of East Germanic culture.

Before the 13th century, the territory was inhabited by the Old Prussians also called Baltic Prussians, a Baltic ethnic group that lived in Prussia (the area of the southeastern coastal region of the Baltic Sea neighbouring of the Baltic Sea around the Vistula Lagoon and the Curonian Lagoon). The territory later called Masuria was then known as Galindia and was probably a peripheral, deeply forested and lightly populated area. Its inhabitants spoke a language now known as Old Prussian and had their own mythology. Although a 19th-century German political entity bore their name, they were not Germans. They were converted to Roman Catholicism in the 13th century, after conquest by the Knights of the Teutonic Order. Estimates range from about 170,000 to 220,000 Old Prussians living in the whole of Prussia around 1200. The wilderness was their natural barrier against attack by would-be invaders. During the Northern Crusades of the early 13th century, the Old Prussians used this wide forest as a brod zone of defence. They did so again against the Knights of the Teutonic Order, who had been invited to Poland by Konrad I of Masovia in 1226. The order's goal was to convert the native population to Christianity and baptise it by force if necessary. In the subsequent conquest, which lasted over 50 years, the original population was partly exterminated, particularly during the major Prussian rebellion of 1261–83. But several Prussian noble families also accommodated to the Knights in order to hold their power and possessions.

After the Order's acquisition of Prussia, Poles (or more specifically, Mazurs, that is inhabitants of the adjacent region of Mazovia) began to settle in the southeastern part of the conquered region. German, Dutch, Flemish, and Danish colonists entered the area afterward, from the northwest. The number of Polish settlers grew significantly again in the beginning of the 15th century, especially after the first and the second treaties of Thorn, in 1411 and 1466 respectively, following the Thirteen Years' War and the final defeat of the order. The Battle of Grunwald took place in western Masuria in 1410. In 1440 the anti-Teutonic Prussian Confederation was founded. In 1454 upon the Confederation's request King Casimir IV of Poland signed the act of incorporation of the entire region including Masuria to Poland and after the subsequent Thirteen Years' War Masuria came under the suzerainty of the Polish Crown, still ruled by the grand master of the Teutonic Order. Later assimilation of the German settlers as well as the Polish immigrants and native Prussian inhabitants created the new Prussian identity, although the subregional difference between the German- and Polish-speaking part remained.

in Święta Lipka at the border of historical Warmia and Masuria was consecrated by Jesuits in 1619. It was once the site of apparitions and miracles and is Poland's finest example of Baroque architecture.]] The secularization of the Teutonic Order in Prussia and the conversion of Albert of Prussia to Lutheranism in 1525 brought Prussia including the area later called Masuria to Protestantism. The Knights untied their bonds to the Catholic Church and became land owning nobleman and the Duchy of Prussia was established as a vassal state of Poland. The Polish language predominated due to the many immigrants from Mazovia, who additionally settled the southern parts of Ducal Prussia, till then virgin part of (later Masuria) in the 16th century. While the southern countryside was inhabited by these - meanwhile Protestant - Polish-speakers, who took refuge, the very small southern towns constituted German mixed with Polish-speaking population. The ancient Old Prussian language survived in parts of the countryside in the northern and central parts of Ducal Prussia until the early 18th century. At that time they proved to be assimilated in the mass of German speaking villagers and farmers Areas that had many Polish language speakers were known as the Polish Departments.

Masuria became one of the leading centers of Polish Protestantism. In the mid-16th century Lyck (Ełk) and Angerburg (Węgorzewo) became significant Polish printing centers. A renowned Polish high school, which attracted Polish students from different regions, was founded in Ełk in eastern Masuria in 1546 by Hieronim Malecki, Polish translator and publisher, who contributed to the creation of the standards and patterns of the Polish literary language. The westernmost part of Masuria, the Osterode (Ostróda) county, in 1633 came under the administration of one of the last dukes of the Piast dynasty, John Christian of Brieg. In 1656, during the Battle of Prostki, the forces of Polish–Lithuanian Commonwealth, including 2,000 Tatar raiders, beat the allied Swedish and Brandenburg army capturing Bogusław Radziwiłł. The war resulted in the destruction of most towns, 249 villages and settlements, and 37 churches were destroyed. Over 50% of the population of Masuria died within the years 1656–1657, 23,000 were killed, another 80,000 died of diseases and famine, 3,400 people were enslaved and deported to Russia. From 1709–1711, in all of Ducal Prussia between 200,000 and 245,000 out of 600,000 inhabitants died from the Black Death. In Masuria the death toll varied regionally; while 6,789 people died in the district of Rhein (Ryn) only 677 died in Seehesten (Szestno). In Lötzen (Giżycko) 800 out of 919 people died. Losses in population were compensated by migration of Protestant settlers or refugees from Scotland, Salzburg (expulsion of Protestants 1731), France (Huguenot refugees after the Edict of Fontainebleau in 1685), and especially from the counterreformed Polish–Lithuanian Commonwealth, including Polish brethren expelled from Poland in 1657. The last group of refugees to emigrate to Masuria were the Russian Philipons (as 'Old Believers' opposed to the State Church) in 1830, when King Frederick William III of Prussia granted them asylum.

After the death of Albert Frederick, Duke of Prussia in 1618, his son-in-law John Sigismund, Margrave of Brandenburg, inherited the duchy (including Masuria), combining the two territories under a single dynasty and forming Brandenburg-Prussia. The Treaty of Wehlau revoked the sovereignty of the King of Poland in 1657.

The region became part of the Kingdom of Prussia with the coronation of King Frederick I of Prussia in 1701 in Königsberg. Masuria became part of a newly created administrative province of East Prussia upon its creation in 1773. The name ''Masuria'' began to be used officially after new administrative reforms in Prussia after 1818. Masurians referred to themselves during that period as "Polish Prussians" or as "Staroprusaki" (Old Prussians) During the Napoleonic Wars and Polish national liberation struggles, in 1807, several towns of northern and eastern Masuria were taken over by Polish troops under the command of generals Jan Henryk Dąbrowski and Józef Zajączek. Some Masurians showed considerable support for the Polish uprising in 1831, and maintained many contacts with Russian-held areas of Poland beyond the border of Prussia, the areas being connected by common culture and language; before the uprising people visited each other's country fairs and much trade took place, with smuggling also widespread