Click Here for Items Related To - Mary II of England


Mary II (30 April 166228 December 1694) was Queen of England, Scotland, and Ireland, co-reigning with her husband, King William III & II, from 1689 until her death from smallpox at age 32. Popular histories usually refer to their joint reign as that of William and Mary. Although their father James, Duke of York, was Roman Catholic, Mary and her younger sister, Anne, were raised as Anglicans at the behest of their uncle, King Charles II. Charles lacked legitimate children, making Mary second in the line of succession. She married her Protestant first cousin, William of Orange, in 1677. Charles died in 1685 and James took the throne, making Mary heir presumptive. James's attempts at rule by decree and the birth of his son, James Francis Edward, led to his deposition in the Glorious Revolution of 1688 and the adoption of the English Bill of Rights. William and Mary became king and queen regnant. Mary mostly deferred to William, a renowned military leader and principal opponent of Louis XIV, when he was in England. She did, however, act alone when William was engaged in military campaigns abroad, proving herself to be a powerful, firm, and effective ruler. Mary's death left William as sole ruler until his own death in 1702, when he was succeeded by Mary's sister, Anne.

Mary, born at St James's Palace in London on 30 April 1662, was the eldest daughter of the Duke of York (the future King James II & VII), and his first wife, Anne Hyde. Mary's uncle was King Charles II, who ruled the three kingdoms of England, Scotland and Ireland; her maternal grandfather, Edward Hyde, 1st Earl of Clarendon, served for a lengthy period as Charles's chief advisor. She was baptised into the Anglican faith in the Chapel Royal at St James's, and was named after her ancestor, Mary, Queen of Scots. Her godparents included her father's cousin, Prince Rupert of the Rhine. Although her mother bore eight children, all except Mary and her younger sister Anne died very young, and King Charles II had no legitimate children. Consequently, for most of her childhood, Mary was second in line to the throne after her father. 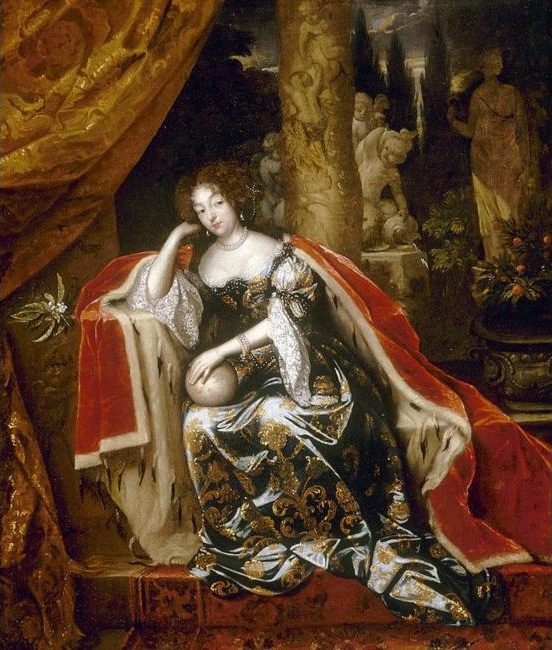 The Duke of York converted to Roman Catholicism in 1668 or 1669 and the Duchess about eight years earlier, but Mary and Anne were brought up as Anglicans, pursuant to the command of Charles II. They were moved to their own establishment at Richmond Palace, where they were raised by their governess Lady Frances Villiers, with only occasional visits to see their parents at St James's or their grandfather Lord Clarendon at Twickenham. Mary's education, from private tutors, was largely restricted to music, dance, drawing, French, and religious instruction. Her mother died in 1671, and her father remarried in 1673, taking as his second wife Mary of Modena, a Catholic who was only four years older than Mary. From about the age of nine until her marriage, Mary wrote passionate letters to an older girl, Frances Apsley, the daughter of courtier Sir Allen Apsley. Mary signed herself 'Mary Clorine'; Apsley was 'Aurelia'. In time, Frances became uncomfortable with the correspondence, and replied more formally. At the age of fifteen, Mary became betrothed to her cousin, the Protestant Stadtholder of Holland, William III of Orange. William was the son of the King's late sister, Mary, Princess Royal, and thus fourth in the line of succession after James, Mary, and Anne. At first, Charles II opposed the alliance with the Dutch ruler—he preferred that Mary wed the heir to the French throne, the Dauphin Louis, thus allying his realms with Catholic France and strengthening the odds of an eventual Catholic successor in Britain; but later, under pressure from Parliament and with a coalition with the Catholic French no longer politically favourable, he approved the proposed union. The Duke of York agreed to the marriage, after pressure from chief minister Lord Danby and the King, who incorrectly assumed that it would improve James's popularity among Protestants. When James told Mary that she was to marry her cousin, "she wept all that afternoon and all the following day".

William and a tearful Mary were married in St James's Palace by Bishop Henry Compton on 4 November 1677. The bedding ceremony to publicly establish the consummation of the marriage was attended by the royal family, with the King himself drawing the bedcurtains. Mary accompanied her husband on a rough sea crossing to the Netherlands later that month, after a delay of two weeks caused by bad weather. Rotterdam was inaccessible because of ice, and they were forced to land at the small village of Ter Heijde, and walk through the frosty countryside until met by coaches to take them to Huis Honselaarsdijk. On 14 December, they made a formal entry to The Hague in a grand procession. Mary's animated and personable nature made her popular with the Dutch people, and her marriage to a Protestant prince was popular in Britain. She was devoted to her husband, but he was often away on campaigns, which led to Mary's family supposing him to be cold and neglectful. Within months of the marriage Mary was pregnant; however, on a visit to her husband at the fortified city of Breda, she suffered a miscarriage, which may have permanently impaired her ability to have children. She suffered further bouts of illness that may have been miscarriages in mid-1678, early 1679, and early 1680. Her childlessness would be the greatest source of unhappiness in her life. From May 1684, King Charles's illegitimate son, James Scott, Duke of Monmouth, lived in the Netherlands, where he was fêted by William and Mary. Monmouth was viewed as a rival to the Duke of York, and as a potential Protestant heir who could supplant the Duke in the line of succession. William, however, did not consider him a viable alternative and correctly assumed that Monmouth had insufficient support.

Upon the death of Charles II without legitimate issue in February 1685, the Duke of York became king as James II in England and Ireland and James VII in Scotland. Mary was playing cards when her husband informed her of her father's accession, and that she was heir presumptive. When Charles's illegitimate son the Duke of Monmouth assembled an invasion force at Amsterdam, and sailed for Britain, William informed James of the Duke's departure, and ordered English regiments in the Low Countries to return to Britain. To William's relief, Monmouth was defeated, captured and executed, but both he and Mary were dismayed by James's subsequent actions. James had a controversial religious policy; his attempt to grant freedom of religion to non-Anglicans by suspending acts of Parliament by royal decree was not well received. Mary considered such action illegal, and her chaplain expressed this view in a letter to the Archbishop of Canterbury, William Sancroft, on her behalf. She was further dismayed when James refused to help when the Catholic King of France, Louis XIV, invaded Orange and persecuted Huguenot refugees there. In an attempt to damage William, James encouraged his daughter's staff to inform her that William was having an affair with Elizabeth Villiers, the daughter of her childhood governess Frances Villiers. Acting on the information, Mary waited outside Villiers's room and caught her husband leaving it late at night. William denied adultery, and Mary apparently believed and forgave him. Possibly, Villiers and William were not meeting as lovers but to exchange diplomatic intelligence. Mary's staff was dismissed and sent back to Britain. 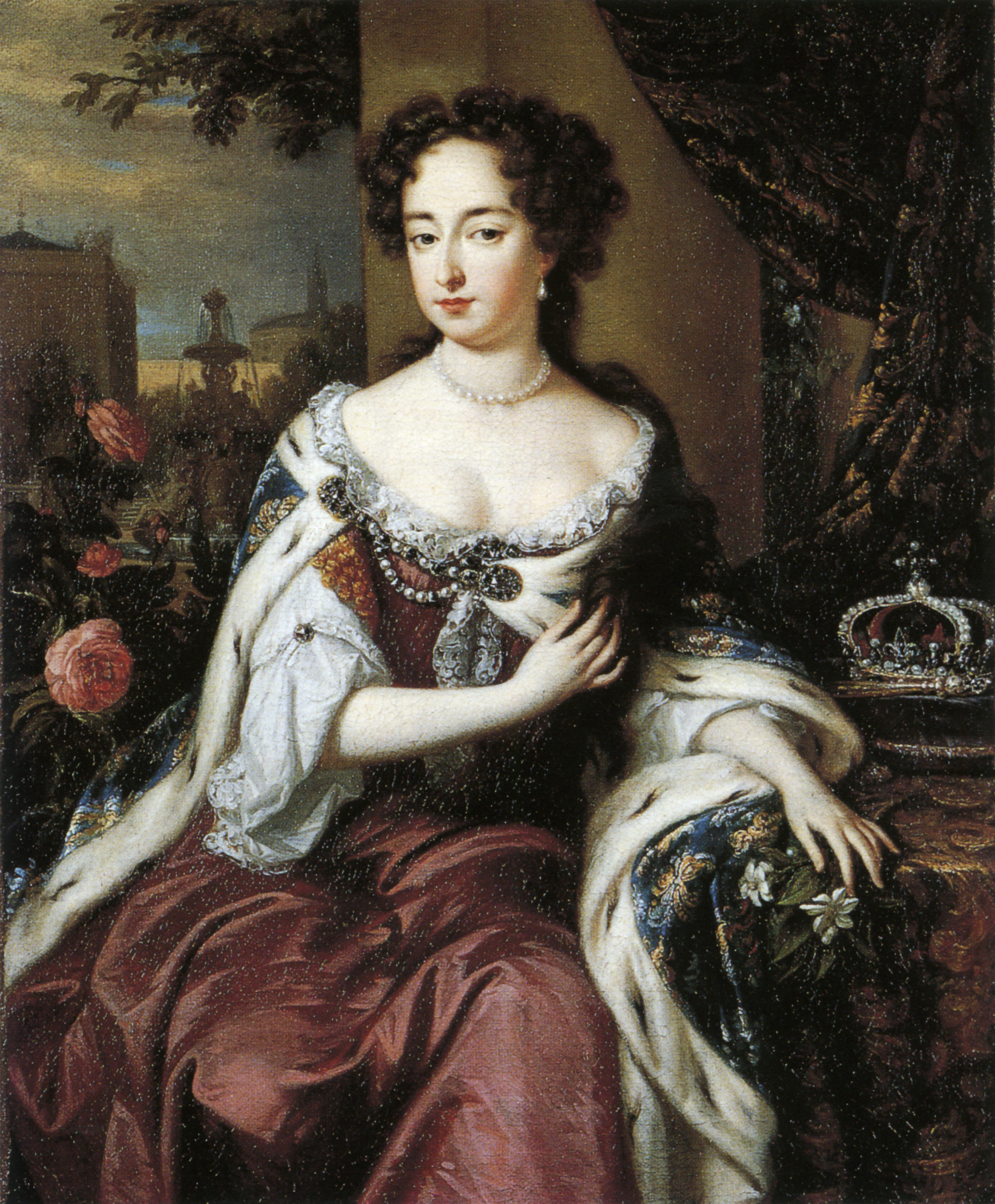 Disgruntled Protestant politicians and noblemen were in contact with Mary's husband as early as 1686. After James took the step of forcing Anglican clergymen to read the Declaration of Indulgence—the proclamation granting religious liberty to Catholics and dissenters—from their churches in May 1688, his popularity plunged further.