The Mariana Islands (; also the Marianas; in Chamorro: ''Manislan Mariånas'') are a crescent-shaped archipelago comprising the summits of fifteen mostly dormant volcanic mountains in the western North Pacific Ocean, between the 12th and 21st parallels north and along the 145th meridian east. They lie south-southeast of Japan, west-southwest of Hawaii, north of New Guinea and east of the Philippines, demarcating the Philippine Sea's eastern limit. They are found in the northern part of the western Oceanic sub-region of Micronesia, and are politically divided into two jurisdictions of the United States: the Commonwealth of the Northern Mariana Islands and, at the southern end of the chain, the territory of Guam. The islands were named after the influential Spanish queen Mariana of Austria following their colonization in the 17th century. The indigenous inhabitants are the Chamorro people. Archaeologists in 2013 reported findings which indicated that the people who first settled the Marianas arrived there after making what may have been at the time the longest uninterrupted ocean voyage in human history. They further reported findings which suggested that Tinian is likely to have been the first island in Oceania to have been settled by humans. Spanish expeditions, beginning with one by Portuguese explorer Ferdinand Magellan in the early 16th century, were the first Europeans to arrive; eventually, Spain annexed and colonized the archipelago, establishing their capital on the largest island, Guam. The Marianas were the first islands Magellan encountered after traversing the Pacific from the southern tip of South America. The fruits found there helped save the survivors from scurvy, which had already killed dozens of crewmembers. 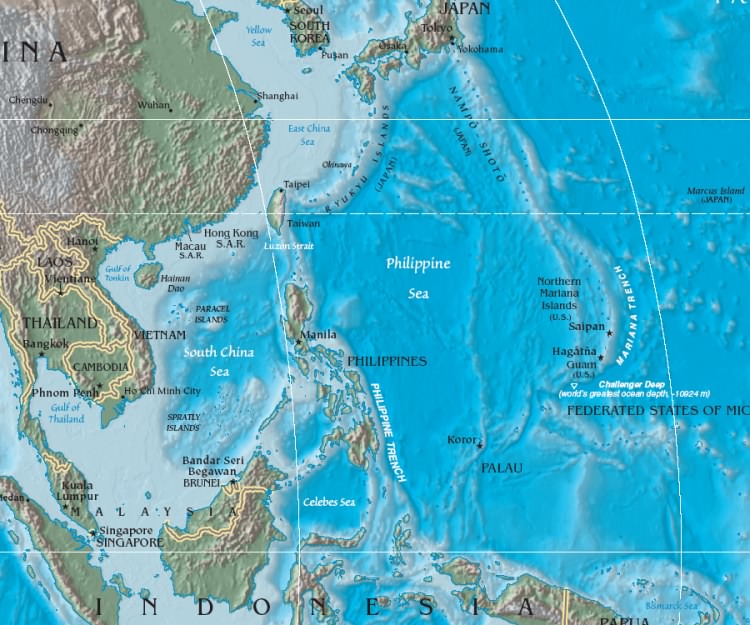 The Mariana Islands are the southern part of a submerged mountain range that extends from Guam to near Japan. Geographically, the Marianas are the northernmost islands of a larger island group called Micronesia, situated between 13° and 21°N latitude and 144° and 146°E longitude. The Mariana Islands have a total land area of . They are composed of two administrative units: * Guam, a US territory * the Northern Mariana Islands (including the islands of Saipan, Tinian and Rota), which make up a Commonwealth of the United States. The island chain geographically consists of two subgroups, a northern group of ten volcanic main islands, all are currently uninhabited; and a southern group of five coralline limestone islands (Rota, Guam, Aguijan, Tinian and Saipan), all inhabited except Aguijan. In the northern volcanic group a maximum elevation of about is reached; there are craters showing signs of activity, and earthquakes are not uncommon. Coral reefs fringe the coasts of the southern isles, which are of slight elevation. The lowest point on the Earth's crust, the Mariana Trench, is near the islands and is named after them.

The islands are part of a geologic structure known as the Izu–Bonin–Mariana Arc system, and range in age from 5 million years old in the north to 30 million years old in the south (Guam). The island chain arose as a result of the western edge of the Pacific Plate moving westward and plunging downward below the Mariana plate, a region which is the most volcanically active convergent plate boundary on Earth. This subduction region, just east of the island chain, forms the noted Mariana Trench, the deepest part of the Earth's oceans and lowest part of the surface of the Earth's crust. In this region, according to geologic theory, water trapped in the extensive faulting of the Pacific Plate as serpentinite, is heated by the higher temperatures of depth during its subduction, the pressure from the expanding steam results in the hydrothermal activity in the area and the volcanic activity which formed the Mariana Islands.

All the islands, except Farallon de Medinilla and Uracas or Farallon de Pajaros (in the northern group), are more or less densely wooded, and the vegetation is dense, much resembling that of the Carolines and also of the Philippines, from where species of plants have been introduced. Owing to the moistness of the soil cryptogams are numerous, as are also most kinds of grasses. On most of the islands there is a plentiful supply of water. The fauna of the Marianas, though inferior in number and variety, is similar in character to that of the Carolines and certain species are indigenous to both island groups. The climate though damp is healthy, while the heat, being tempered by the trade winds, is milder than that of the Philippines; the variations of temperature are not great. The majority of islands in the Marianas still retain their indigenous names end in the letters -an; e.g. Guahan (the indigenous name of Guam), Agrigan, Agrihan, Aguihan/Aguigan, Pagan, Sarigan, etc.

The islands are part of a geologic structure known as the Izu–Bonin–Mariana Arc system and range in age from 5 million years old in the north to 30 million years old in the south (Guam). The islands are formed as the highly dense and very old western edge of the Pacific plate plunges downward to form the floor of the Mariana Trench and carries trapped water under the Mariana plate as it does so. This water is super-heated as the plate is carried farther downward and results in the volcanic activity which has formed the arc of Mariana Islands above this subduction region. The Mariana Islands were the first islands settled by humans in Remote Oceania. Incidentally it is also the first and the longest of the ocean-crossing voyages of the Austronesian peoples into Remote Oceania, and is separate from the later Polynesian settlement of the rest of Remote Oceania. They were first settled around 1500 to 1400 BCE by migrants departing from the Philippines. Archeological studies of human activity on the islands has revealed potteries with red-slipped, circle-stamped and punctate-stamped designs found in the Mariana Islands dating between 1500 and 1400 BC. These artifacts show similar aesthetics to pottery found in Northern and Central Philippines, the Nagsabaran (Cagayan Valley) pottery, which flourished during the period between 2000 and 1300 BC. Comparative and historical linguistics also indicate that the Chamorro language is most closely related to the Philippine subfamily of the Austronesian languages, instead of the Oceanic subfamily of the languages of the rest of Remote Oceania. Mitchondrial DNA and whole genome sequencing of the Chamorro people strongly support an ancestry from the Philippines. Genetic analysis of pre-''Latte'' period skeletons in Guam also show that they do not have Australo-Melanesian ("Papuan") ancestry which rules out origins from the Bismarck Archipelago, New Guinea, or eastern Indonesia. The Lapita culture itself (the ancestral branch of the Polynesian migrations) is younger than the first settlement of the Marianas (the earliest Lapita artifacts are dated to around 1350 to 1300 BCE), indicating that they originated from separate migration voyages. Nevertheless, DNA analysis also show close genetic relationship between ancient settlers of the Marianas and early Lapita settlers in the Bismarck Archipelago. This may indicate that both the Lapita culture and the Marianas were settled from direct migrations from the Philippines, or that early settlers from the Marianas voyaged further southwards into the Bismarcks and reconnected with the Lapita people. The Marianas also later established contact and received migrations from the Caroline Islands at around the first millennium CE. This brought new pottery styles, language, genes, and the hybrid Polynesian breadfruit. The period 900 to 1700 CE of the Marianas, immediately before and during the Spanish colonization, is known as the ''Latte'' period. It is characterized by rapid cultural change, most notably by the massive megalithic ''latte'' stones (also spelled ''latde'' or ''latti''). These were composed of the ''haligi'' pillars capped with another stone called ''tasa'' (which prevented rodents from climbing the posts). These served as supports for the rest of the structure which was made of wood. Remains of structures made with similar wooden posts have also been found. Human graves have also been found in front of ''latte'' structures, The ''Latte'' period was also characterized by the introduction of rice agriculture, which is unique in the pre-contact Pacific Islands. The reasons for these changes is still unclear, but it is believed that it may have resulted from a third wave of migrants from Island Southeast Asia. Comparisons with other architectural traditions makes it likely that this third migration wave were again from the Philippines, or from eastern Indonesia (either Sulawesi or Sumba), all of which have a tradition of raised buildings with capstones. Interestingly, the word ''haligi'' ("pillar") is also used in various languages throughout the Philippines; while the Chamorro word ''guma'' ("house") closely resembles the Sumba word ''uma''.

The first Europeans to see the island group were a Spanish expedition, who on March 6, 1521, observed a string of islands and sailed between two of them during a Spanish expedition of world circumnavigation under the command of Ferdinand Magellan. Historically, the southern village of Umatac, Guam has been credited as the site of the Spanish landing. As confirmation, a scholarly study of the navigator's diary, now kept in preservation in the Philippines, revealed a drawing of the islands with a tiny island to the south of a much larger island above it. The described placement of the islands confirms that Magellan had actually sailed between Guam and Cocos Island, and not Guam and Rota, as some originally thought. Especially since the Northern areas of Guam do not have safe coves or harbors to anchor. Moreover, the waters of Northern Guam are oftentimes more rough and the currents are even more treacherous in comparison to the safer coves and currents seen throughout South-Western side of Guam. Regardless of where they landed, Spanish ships arrived in Guam and were unable to get fresh food as the inhabitants, Chamorros, "entered the ships and stole whatever they could lay their hands on", including "the small boat that was fastened to the poop of the flagship." The Spanish crew, in retaliation, attacked the Chamorros and dubbed the islands Islas de los Ladrones (Islands of the Thieves). "Those people are poor, but ingenious and very thievish, on account of which we called those three islands the islands of Ladrones."