The Marine Commandos, abbreviated to MARCOS and officially called the Marine Commando Force (MCF), are the special forces unit of the Indian Navy and is responsible for conducting special operations. The MARCOS were founded in February 1987. MARCOS are capable of operating in all types of environments; at sea, in air and on land. The force has gradually acquired more experience and an international reputation for professionalism. The MARCOS regularly undertake specialised maritime operations in Jammu and Kashmir through the Jhelum River and Wular Lake, a freshwater lake, and conduct counter-insurgency operations in the region. Some MARCOS units are a part of the tri-services Armed Forces Special Operations Division. 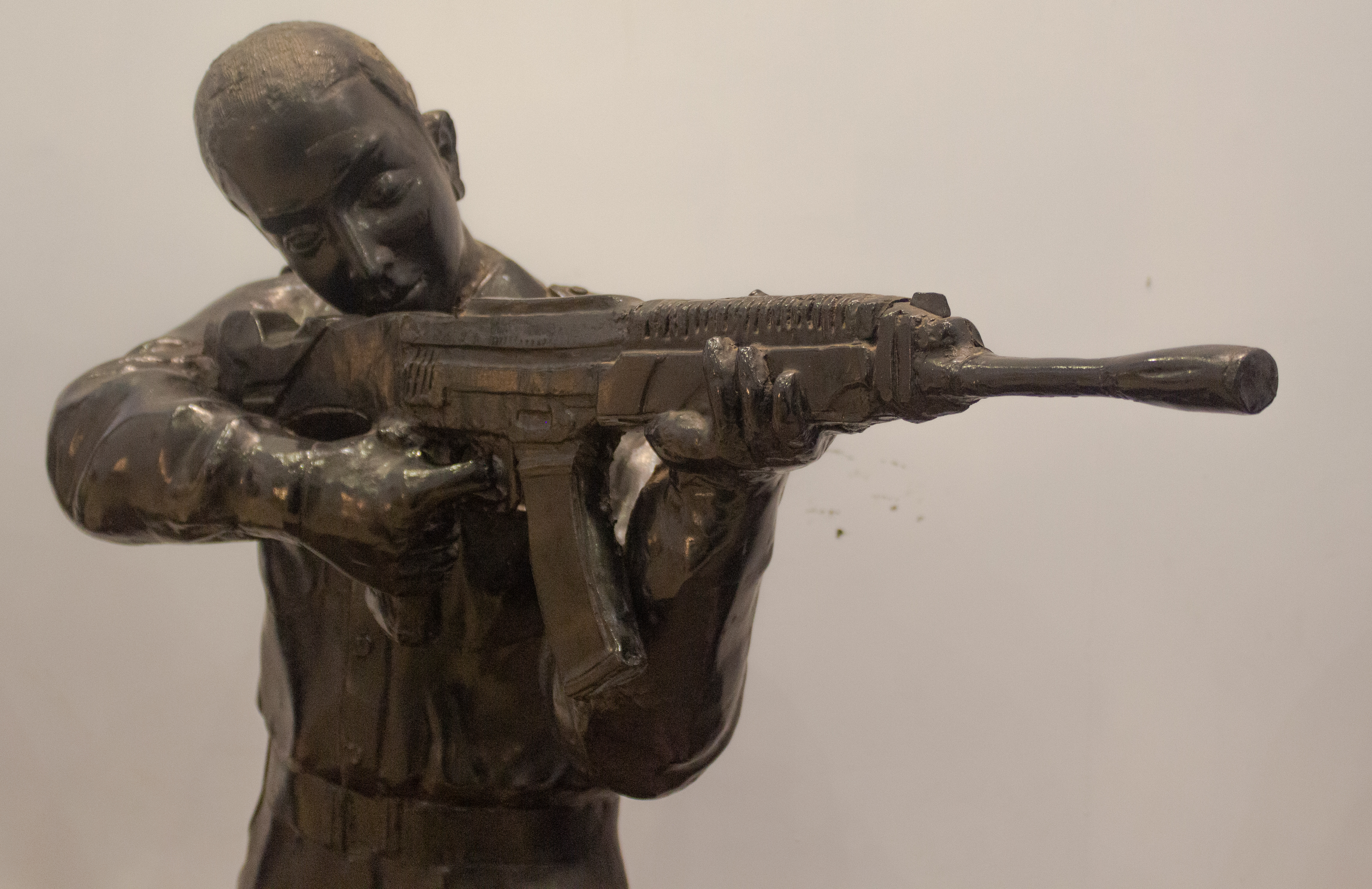 In 1955, the Indian military established a diving school at Cochin with the assistance of the British Special Boat Service and began teaching combat divers skills such as explosive disposal, clearance, and salvage diving. The combat divers failed to achieve their desired outcomes during the Indo-Pakistani War of 1971 as they were not adequately trained for sabotage missions. The combat divers had also taught basic underwater demolition training to insurgents from Bangladesh, who were then sent on missions during the war but did not cause any substantial damage to Pakistani military installations. Subsequently, during the war, the Indian Navy assisted the Indian Army in landing operations against the Pakistani military base in Cox's Bazar. After the war ended, army units were often drafted into amphibious exercises. In 1983, the Indian Army formation called 340th Army Independent Brigade was converted into an amphibious assault unit and a series of joint airborne-amphibious exercises were conducted in later years. In April 1986, the Indian Navy started planning for the creation of a special forces unit that would be capable of undertaking missions in a maritime environment, conducting raids and reconnaissance, and counter-terrorism operations. Three volunteer officers from the diving unit, which was created in 1955, were selected and underwent training courses with the United States Navy SEALs at Coronado. They later went on training exchanges with the Special Boat Service. In February 1987, the Indian Marine Special Force (IMSF) officially came into existence and the three officers were its first members. The IMSF was renamed as 'Marine Commando Force' in 1991.

The MARCOS are capable of undertaking operations in all types of terrain but are specialised in maritime operations. The force has undertaken numerous joint exercises with special forces from around the world. , the MARCOS has about 2,000 personnel though the exact number remains classified. Operations undertaken by MARCOS usually remain classified; some of the known operations are:

As a specialised force, the MARCOS is responsible for conducting operations at the strategic and the tactical level. MARCO operations are usually conducted in support of naval forces, although MARCOS are also deployed in other domains. The responsibilities of MARCOS has evolved with time. Some of the duties of MARCOS include:- * Providing support to amphibious operations. * Special surveillance and amphibious reconnaissance operations. * Clandestine operations inside hostile territory, including diving operations and special raids. * Direct action * Hostage rescue operations. * Counter-terrorism operations. * Asymmetric warfare. * Foreign internal defence. Additionally, MARCOS can also assist the Indian Air Force in Suppression of Enemy Air Defences (SEAD) missions.

The MCF currently operates out of the naval bases at Mumbai, Visakhapatnam, Goa, Kochi and Port Blair. There are plans to shift the current training facility at the Naval Special Warfare Training and Tactical Centre to a new facility to be set up at the erstwhile Naval Academy in Goa. INS ''Abhimanyu'', located in Mumbai, was the base where MARCOS was formed. It is named after a character from the epic ''Mahābhārata''. The base is a part of the Western Naval Command. It was originally created in 1974 and was commissioned on 1 May 1980. The Indian Marine Special Force (IMSF) was located there in 1987. On 12 July 2016, the naval base INS Karna was commissioned near Visakhapatnam as a permanent base for the unit.

All MARCOS personnel are males selected from the Indian Navy when they are in their early 20s and have to go through a stringent selection process and training. The selection standards are extremely high. Training is a continuous process. American and British special forces assisted in setting up the initial training program, which now consists of a two-year course for new recruits. The training regimen includes airborne operations, combat diving courses, counter-terrorism, anti-hijacking, anti-piracy operations, direct action, infiltration and exfiltration tactics, special reconnaissance and unconventional warfare. Most of the training is conducted at INS Abhimanyu, which is also the home base of MARCOS. All MARCOS personnel are freefall qualified (HALO/HAHO). A few also qualify to operate the Cosmos CE-2F/X100 two-man submarines. MARCOS train with the Special Forces officers of the Indian Army like the Para Commandos at the Indian Special Forces Training School, Nahan and Army's other schools for unconventional warfare. These include the Junior Leaders' Commando Training Camp in Belgaum, Karnataka, the Parvat Ghatak School for high altitude mountain warfare in Tawang, Arunachal Pradesh, desert warfare school in Rajasthan, the High Altitude Warfare School (HAWS) in Sonamarg, Kashmir, and the Counter-insurgency and Jungle Warfare School (CIJWS) in Vairengte, Mizoram. These schools routinely host students from other countries. MARCOS are then trained at agencies within the navy. The pre-training selection process is made up of two parts. Indian Navy personnel who want to join MARCOS must undergo a three-day physical fitness and aptitude test. Within this process, 80% of the applicants are screened out. A further screening process known as 'hell's week' is similar to the United States Navy SEALs' "Hell Week". This involves a high degree of physical exercise and sleep deprivation. After this process, actual training begins. Around 98% of the volunteers who enroll fail to fully qualify as MARCOS.

The total duration of training of MARCOS is between two-and-a-half years and three years. The basic training lasts six months. The first two months is the selection phase, during the first month of which he first phase of which recruits undergo rigorous physical tests, of which only 50% pass. For the next nine months, they are taught to use different weapons, conduct special warfare techniques and gather intelligence from the enemy. The cadets start with basic diving and commando tactics and skills. Those who pass this phase are trained in every aspect of modern warfare and in every situation. This is followed by a year of training in specialised skills such as close combat including Krav Maga. Recruits receive warfare training through field operations in counter-insurgency and anti-terrorist operations, and are trained to operate in any kind of environment and in situations like hostage rescue, urban combat and piracy. A notably rigorous training program is the "death crawl"—an struggle through thigh-high mud while loaded with of gear and after a obstacle course that most soldiers would fail. After that, when the trainee is exhausted and sleep-deprived, he must shoot a target away, with a partner standing next to it. The MARCOS are trained in every kind of weapon and instruments, including knives, crossbows, sniper rifles, handguns, assault rifles, submachine guns and bare hands. Being divers, they can reach hostile shores swimming underwater. The further training includes: * Open and closed circuit diving * Basic commando skills including advanced weapon skills, demolitions, endurance training and martial arts * Airborne training * Intelligence training * Operation of submersible craft * Offshore operations * Anti-terrorism operations * Operations from submarines * Skydiving * Various special skills such as language training, insertion methods, etc. * Explosive ordnance disposal techniques

They are also trained to parachute into open water with full combat load. In 2013, the MARCOS introduced a larger duck-drop system that will be fitted on Ilyushin Il-76 aircraft. Each system of two boats can accommodate 32 commandos, their weapons and fuel for the boats. Once para-dropped from the aircraft, it allows for the commandos to assemble inflatable motorised boats within ten minutes and quickly reach ships in distress. Such rescue missions can be mounted by the commandos deployed within an hour. The MARCOS are also preparing for urban warfare and have begun practicing on 3D virtual models of offshore installations to ensure a swift response during a terrorist attack. The marine commandos undergo regular training sessions in this computer-generated programme to be well-prepared for a strike similar to the 26/11 attack. The average MARCOS training drop-out rate is more than 90%. The force has its own training facility as an adjunct to the operational company at INS Abhimanyu, Mumbai, later as the Naval Special Warfare Tactical Training Centre. For combat diving training, the commandos are sent to the Naval Diving School in Kochi. There are plans to move the Naval Special Warfare Tactical Training Centre to the erstwhile Naval Academy facility in Kerala, where it will focus on jungle warfare and counter-insurgency operations. The new facility will be modelled on the lines of CIJWS of the Indian Army in Mizoram.

To strengthen the capabilities of MARCOS to carry out special operations, the Indian Navy will procure an advanced Integrated Combat System (ICS) that will ensure an effective command, control and information-sharing structure to enhance the MARCOS' capabilities while engaging targets. The ICS will provide enhanced capabilities such as tactical awareness and the ability to fight in hostile environments, and can enable Group Commanders to remotely monitor and control operations. It will help integrate an individual sailor's capability of surveillance, ballistic protection, communication and firepower through an integrated network at individual and group level. Initiating the procurement process through a Request for Information (RFI), Navy's Directorate of Special Operations and Diving has sought details from global vendors about the ICS. The individual ICS equipment required by the Navy includes lightweight helmets, head-mounted displays, tactical and soft ballistic vests along with communication equipment. The group-level gear requirements include command and control and surveillance systems, and high-speed communication equipment. The devices would have a sight for the sniper, a laser rangefinder and a long-range thermal imager and near-IR laser pointer for a combat group to undertake surveillance, reconnaissance and targeting. The ICS would be compatible with assault rifles and close-quarter combat weapons. The Navy has recently started acquiring the Israeli IMI Tavor TAR-21 for the MARCOS.

In 2013, Vizag-based Hindustan Shipyards Ltd won the contract for building four 500-tonne mini-submarines, which were designed by Larsen & Toubro. The mini-submarines, to be delivered in the latter half of the 2010s, will be used exclusively by the Indian Navy's MARCOS.