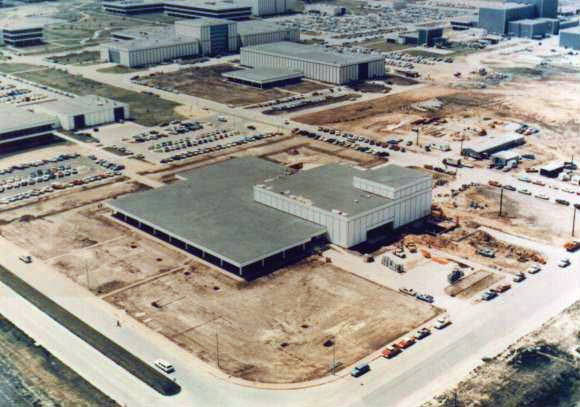 The Lunar Receiving Laboratory (LRL) was a facility at NASA's Lyndon B. Johnson Space Center (Building 37) that was constructed to quarantine astronauts and material brought back from the Moon during the Apollo program to mitigate the risk of back-contamination. After recovery at sea, crews from Apollo 11, Apollo 12 and Apollo 14 walked from their helicopter to the Mobile Quarantine Facility on the deck of an aircraft carrier and were brought to the LRL for quarantine. Samples of rock and regolith that the astronauts collected and brought back were flown directly to the LRL and initially analyzed in glovebox vacuum chambers. :::File:NASA-Houston LRL-installation.png The quarantine requirement was dropped beginning with Apollo 15 and the LRL was used for study, distribution and safe storage of the lunar samples. Between 1969 and 1972, six Apollo space flight missions brought back 382 kilograms (842 pounds) of lunar rocks, core samples, pebbles, sand and dust from the lunar surface. The six space flights returned 2200 separate samples from six different exploration sites on the lunar surface. Other lunar samples were returned to Earth by three automated Soviet spacecraft, Luna 16 in 1970, Luna 20 in 1972, and Luna 24 in 1976, which returned samples totaling 300 grams (approximately 3/4 pound). In 1976, a portion of the samples were moved to Brooks Air Force Base in San Antonio, Texas for second-site storage. In 1979, a Lunar Sample Laboratory Facility was built to serve as the chief repository for the Apollo samples. It was constructed to provide permanent storage of the lunar sample collection in a physically secure and non-contaminating environment. The facility consists of storage vaults for the samples, laboratories for sample preparation and study, a vault for sample data and records, and machinery to supply nitrogen to the cabinets in which the samples are stored and processed

The Lunar Receiving Laboratory building was later occupied by the Life Sciences division, contained biomedical and environment labs, and was used for experiments involving human adaptation to microgravity. As of September 25, 2019, reports from NASA state that the Lunar Receiving Laboratory has not been used for two years and is slated to be demolishe