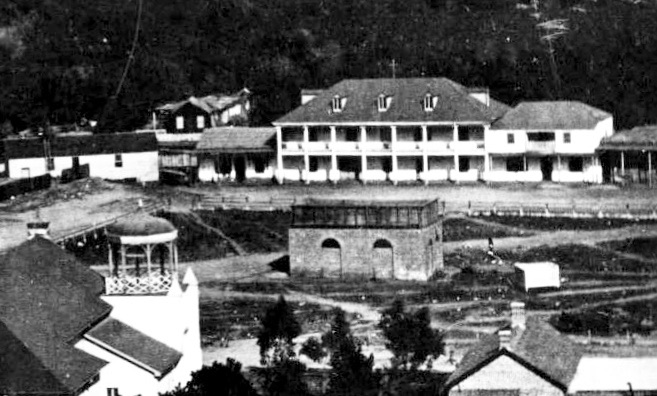 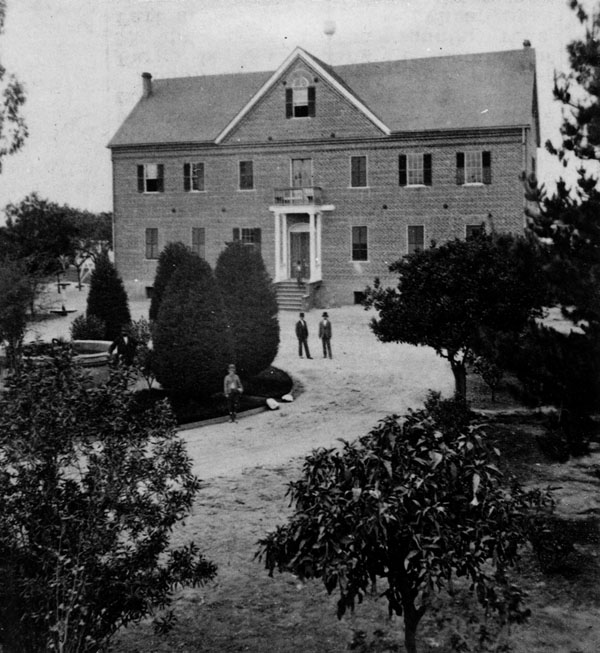 Loyola Marymount University (LMU) is a private Jesuit and Marymount research university in Los Angeles, California. It is located on the west side of the city, near Playa Vista. LMU is also the parent school to Loyola Law School located in downtown Los Angeles. LMU offers 60 major and 55 minor undergraduate degrees and programs across six undergraduate colleges. The Graduate Division offers 51 master's degree programs, one education doctorate, one doctorate in juridical science, a juris doctorate and 12 credential programs. LMU's sports teams are called "the Lions" and compete at the NCAA Division I level as members of the West Coast Conference in 19 sports.

The present university is the product first institution of higher learning in Southern California, St. Vincent's College, founded and run by the Vincentians until 1911. In 1865, the Vincentian Fathers were commissioned by Bishop Thaddeus Amat y Brusi to found St. Vincent's College for boys in Los Angeles. Father John Asmuth, was the first President Rector. Classes were held for two years in the Lugo Adobe on the east side of the Plaza while a new building was being finished. The historic home, aptly donated by Don Vicente Lugo, was one of few two-story adobes then in town. The house stood in the empty lot across Alameda Street between the Plaza and Union Station, (near Olvera Street). Later, the brick building was replaced with a larger one in stone. The 7th street property, now called St. Vincent's Place, took up the block bounded by Fort (Broadway), 6th, Hill, and 7th streets. When St. Vincent's later moved to a new campus, the old building became US Army Headquarters, and in 1907, the large Bullock's department store was built and operated here until 1983. In 1869, St. Vincent's was accredited by the state. In 1887, the college moved to a new, more majestic campus—bounded by Grand Avenue, Washington Boulevard, Hope Street, and 18th—which would have a chapel, residence hall, cottages, and a traditional, brick-and-ivy complex housing classrooms and lecture halls. Like the second college building by Pershing Square, the new retained a tall, central tower topped with St. Vincent's trademark mansard roof. While the campus underwent many expansions, the athletic program grew, and the Catholic Collegiates competed against Occidental's Presbyterians and USC's Methodists. St. Vincent's athletes were also recruited into professional sports. During this era, from St. Vincent's College graduated many alumni who would become famous in the history of Los Angeles, among whom were Isidore Dockweiler, Eugene Biscailuz and Leo Carrillo. In 1911, the Vincentians, who had led the college since its founding the century before, were replaced with the Jesuits, who quickly moved the college to a larger property. As planning began on developing a 20th-century university, enrollment was folded into a new college, briefly called "Los Angeles College" that would soon evolve into Loyola. The old campus became St. Vincent's School. In 1922, St. Vincent's historic campus was sold. Over time, the historic buildings of old St. Vincent's College have been torn down and replaced by, for example, the Grand Olympic Auditorium (1924) and large, open parking lots.

Beginnings of Loyola in L.A.

When the Vincentians pulled out of educational ministry in Los Angeles in 1911, Bishop Thomas Conaty asked the Jesuits to come to Los Angeles and take over St. Vincent's College. Not wishing to assume any of the college's debt, the Jesuits, instead, founded Los Angeles College in 1911. They simultaneously opened their high school division (Loyola High School) and folded the board, faculty, and students of St. Vincent's College into Los Angeles College at a new location made up of several bungalows at Avenue 52, Highland Park, Los Angeles. Father Richard A. Gleeson, was the first Jesuit President but the board of the college was initially composed of Vincentian Fathers. Rapid growth prompted the Jesuits to seek a new campus on Venice Boulevard in 1917; with this move, the name of the school was changed back to St. Vincent's College. However, in 1918 the name was once again changed to Loyola College of Los Angeles. Graduate instruction began in 1920 with the foundation of a separate law school. Though instruction at the undergraduate level remained exclusive to male students, women were admitted to the law school. The law school was the second in Los Angeles to admit Jewish students. (USC's law school had done so at least since 1910.) In 1928, the undergraduate division of Loyola relocated, under then-President Joseph A. Sullivan, S.J., to the present Westchester campus, and achieved university status in 1930, becoming Loyola University of Los Angeles. Loyola Law School did not move with the rest of the university, but moved later to another location just west of downtown Los Angeles. World War II had a significant impact on Loyola University. As enrollment began to drop, Father Edward Whelan, president at the time, brokered a deal with the US Army to form an officer training program for both Army and Navy officers. The contract allowed the university to remain open during the war and enrollment hit all-time highs as a result of returning veterans taking advantage of the G.I. Bill in the mid-to-late 1940s. Additionally, Father Whelan recognized the grave injustice of the Japanese internment camps during World War II. At Loyolay, he hired and housed many Japanese Americans returning to Los Angeles after their release from the camps. In 1949, Father Charles Cassassa, was named president and began one of the most consequential presidencies in the university's history. His work included the formation of a graduate division on the Westchester campus in June 1950, graduate work having formed an integral part of the Teacher Education Program during the preceding two years, expanding campus infrastructure. He then established the Institute of Human Relations to promote improved racial relations in business and in government. Future Mayor of Los Angeles, Tom Bradley attended the first year-long program held by the Institute of Human Relations and remained lifelong friends with Father Cassassa. Father Cassassa also continued Father Whelan's legacy of combating racial injustice. In 1950, he forced the school's football team to forfeit an away game against Texas Western since the school's rules prevented African-American players, such as Loyola's Bill English, to play on their field. During the Cassassa era, the law school moved to its current campus, designed by Frank Gehry, in 1964. Loyola University also continued as an all-male school until its merger with Marymount College in 1973. There were, however, several notable exceptions. The first exception occurred during the summer months, when the Loyola faculty offered classes for religious women (Catholic nuns) seeking undergraduate degrees. Many sisters from across Los Angeles and Orange County acquired their undergraduate degrees from Loyola. Additionally, women were admitted to several of Loyola's graduate programs prior to the affiliation and merger with Marymount College. Furthermore, there were several female students admitted to Marymount College who later matriculated into Loyola University during the two schools' five-year affiliation prior to 1973, primarily into Engineering and Business majors which Marymount did not offer.

Beginnings of Marymount in L.A.

In separate though parallel developments, the Religious of the Sacred Heart of Mary began teaching local young women in 1923. Having been invited by Bishop John Cantwell, seven sisters of the Religious of the Sacred Heart of Mary, under the leadership of Mother Cecilia Rafter, formed what was first an elementary school and, shortly thereafter, a high school. Within ten years, so many young women wished to continue their education with the Marymount sisters beyond high school that Marymount Junior College opened as an all-women's school on the Westwood campus of Marymount High School in 1933. Mother Gertrude Cain was the first president of the junior college and guided its development into a four-year college in 1948, assuming the name Marymount College of Los Angeles. In 1960, having outgrown its shared Westwood campus, Marymount College moved both its two-year program and its four-year program to the Palos Verdes Peninsula in southwestern Los Angeles. The Palos Verdes campus became Marymount California University. In 1967 Sister Raymunde McKay, the president of Marymount College, extended an invitation to Sister Mary Felix Montgomery, General Superior of the Sisters of Saint Joseph of Orange, to merge Marymount College with St. Joseph College of Orange, a four-year liberal arts college for women religious run by the Sisters of Saint Joseph of Orange, which Sister Montgomery accepted. St. Joseph College was originally formed as St. Joseph Teacher's College, a junior college affiliated with The Catholic University of America in 1953. In 1959 it was incorporated as an autonomous, four-year institution and assumed the St. Joseph College name. In 1968 Marymount and St. Joseph's Colleges merged under the Marymount name with an agreement that the traditions and heritage of both the Religious of the Sacred Heart of Mary and the Sisters of St. Joseph of Orange would be carried in the Marymount name. As part of the Marymount College Agreement, Marymount College was administered "co-equally" by the Religious of the Sacred Heart of Mary and the Sisters of St. Joseph of Orange as members of both communities partnered in the governing, staffing, and teaching of Marymount College. Subsequently, St. Joseph College of Orange was renamed Marymount College of Orange. During the academic year, it remained a college for women religious seeking their baccalaureate degrees; college courses were offered to men and women during the summers at the Orange campus. The same year, Marymount College began its affiliation with Loyola University, moving its four-year program at the Palos Verdes campus to the Westchester campus of Loyola University. Marymount College then operated on three campuses: Palos Verdes retained its two-year program, Orange remained a campus for women religious in Orange County, and Westchester was a campus for both lay and religious women.