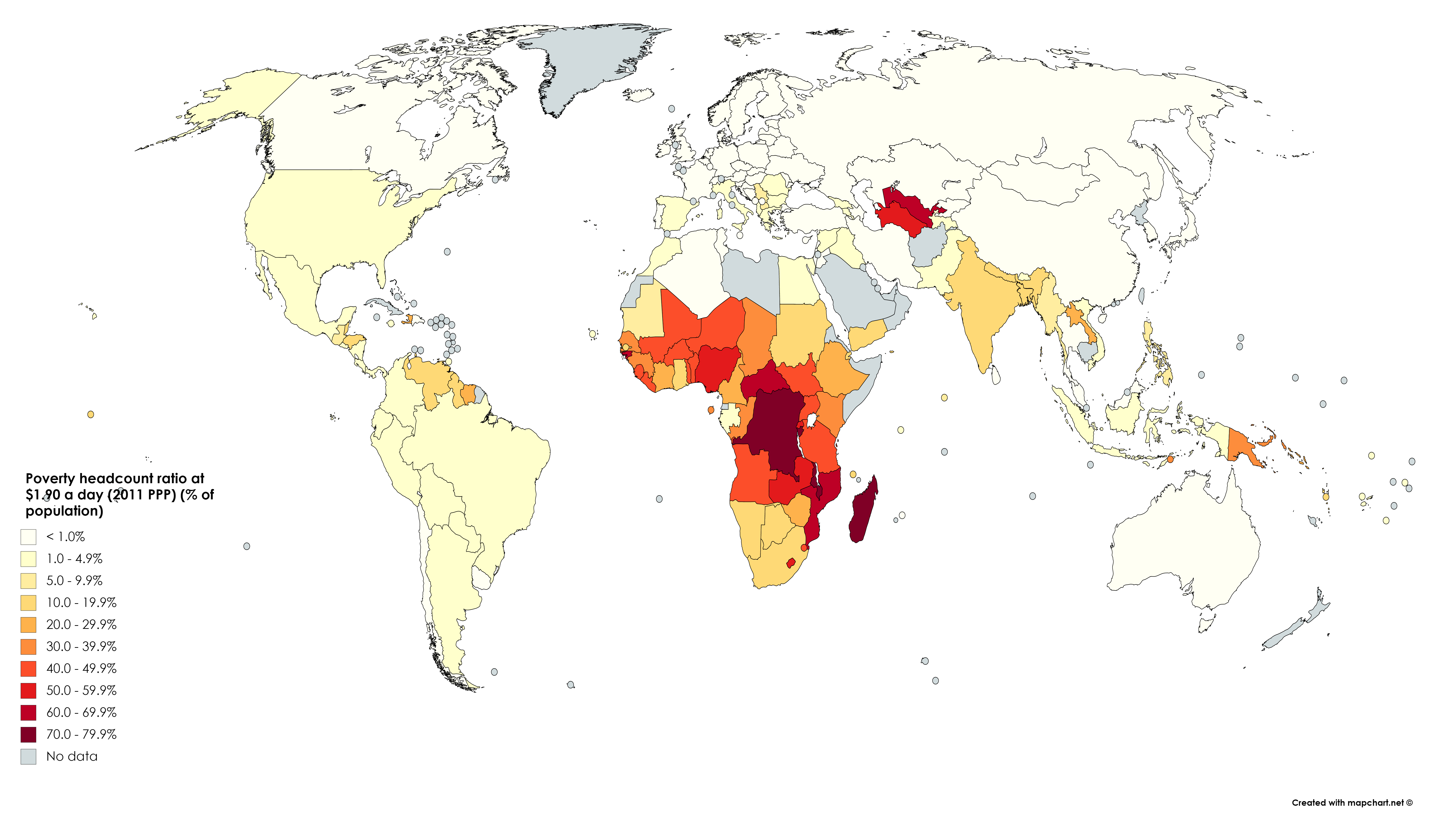 The least developed countries (LDCs) is a list of developing countries that, according to the United Nations, exhibit the lowest indicators of socioeconomic development, with the lowest Human Development Index ratings of all countries in the world. The concept of LDCs originated in the late 1960s and the first group of LDCs was listed by the UN in its resolution 2768 (XXVI) of 18 November 1971. A country is classified among the Least Developed Countries if it meets three criteria: *Poverty – adjustable criterion based on GNI per capita averaged over three years. a country must have GNI per capita less than US$ 1,025 to be included on the list, and over $1,230 to graduate from it. *Human resource weakness (based on indicators of nutrition, health, education and adult literacy). *Economic vulnerability (based on instability of agricultural production, instability of exports of goods and services, economic importance of non-traditional activities, merchandise export concentration, handicap of economic smallness, and the percentage of population displaced by natural disasters). As of December 2020, 46 countries are classified as LDC, while six have been upgraded between 1994 and 2020. The WTO recognizes the UN list and says that "Measures taken in the framework of the WTO can help LDCs increase their exports to other WTO members and attract investment. In many developing countries, pro-market reforms have encouraged faster growth, diversification of exports, and more effective participation in the multilateral trading system."

LDC criteria are reviewed every three years by th
Committee for Development Policy (CDP)
of the UN Economic and Social Council (ECOSOC). Countries may "graduate" out of the LDC classification when indicators exceed these criteria in two consecutive triennial reviews. The United Nations Office of the High Representative for the Least Developed Countries, Landlocked Developing Countries and Small Island Developing States (UN-OHRLLS) coordinates UN support and provides advocacy services for Least Developed Countries. The classification () applies to 46 countries. At the UN's fourth conference on LDCs, which was held in May 2011, delegates endorsed a goal targeting the promotion of at least half the current LDC countries within the next ten years. As of 2018, 10 or more countries are expected to be upgraded until 2024, with Bangladesh and Djibouti satisfying all criteria in 2018 already. There are three countries which presently meet the criteria for LDC status, but have declined to be included in the index, questioning the validity or accuracy of the CDP's data: Ghana, Papua New Guinea, and Zimbabwe.

The three criteria (human assets, economic vulnerability and gross national income per capita) are assessed by the Committee for Development Policy every three years. Countries must meet two of the three criteria at two consecutive triennial reviews to be considered for graduation. The Committee for Development Policy sends its recommendations for endorsement to the Economic and Social Council (ECOSOC). Since the LDC category was initiated, six countries have graduated to ''developing country'' status. The first country to graduate from LDC status was Botswana in 1994. The second country was Cape Verde in 2007. Maldives graduated to ''developing country'' status on 1 January 2011, Samoa graduated in 2014, Equatorial Guinea in 2017, and Vanuatu in December 2020. Bhutan will graduate in 2023, and São Tomé and Príncipe and Solomon Islands will leave the category in 2024. Nepal was selected to be graduated to developing countries on 2018. However, the authorities of Nepal requested to postpone it till 2021. Angola was expected to graduate in 2021, but the preparatory period was extended by three years because of the economic difficulties of the country and its dependence on commodities. Bangladesh met the criteria for the first time in 2018 and is likely to graduate in 2024 according to the UN Department of Economic and Social Affairs.

There have been four United Nations conferences on LDCs, held every ten years. The first two were in Paris, in 1981 and 1991; the third was in Brussels in 2001. The Fourth UN Conference on Least Developed Countries (LDC-IV) was held in Istanbul, Turkey, 9–13 May 2011. It was attended by Ban Ki-Moon, the head of the UN, and close to 50 prime ministers and heads of state. The conference endorsed the goal of raising half the existing Least developed countries out of the LDC category by 2022. As with the Seoul Development Consensus drawn up in 2010, there was a strong emphasis on boosting productive capability and physical infrastructure, with several NGOs not pleased with the emphasis placed on the private sector.

Issues surrounding global trade regulations and LDCs have gained a lot of media and policy attention thanks to the recently collapsed Doha Round of World Trade Organization (WTO) negotiations being termed a development round. During the WTO's Hong Kong Ministerial, it was agreed that LDCs could see 100 percent duty-free, quota-free access to U.S. markets if the round were completed. But analysis of the deal by NGOs found that the text of the proposed LDC deal had substantial loopholes that might make the offer less than the full 100 percent access, and could even erase some current duty-free access of LDCs to rich country markets. Dissatisfaction with these loopholes led some economists to call for a reworking of the Hong Kong deal. Dr. Chiedu Osakwe, as of 2001 the Director, Technical Cooperation Division at the Secretariat of the WTO, and adviser to the Director-General on developing country matters, was appointed as the WTO Special Coordinator for the Least Developed Countries beginning in 1999. He worked closely with the five other agencies that together with the WTO constitute the Integrated Framework of action for the Least Developed Countries. They addressed issues of market access, special and differential treatment provisions for developing countries, participation of developing countries in the multilateral trading system, and development questions, especially the interests of developing countries in competition policy. At the 28th G8 summit in Kananaskis, Alberta, Canadian Prime Minister Jean Chrétien proposed and carried the Market Access Initiative, so that the then 48 LDCs could profit from "trade-not-aid". Additionally, the United Nations Sustainable Development Goal 14 advocates for an effective special and differential treatment of LCDs as integral parts of WTO fisheries subsidies negotiation.

The list of "least developed countries" according to the United Nations with some that are categorised into the landlocked developing countries and the Small Island Developing States:

In the Americas, there is 1 country that is classified as a least developed country: *

In Oceania, there are 3 countries that are classified as least developed countries: * * *


Office of the High Representative for the Least Developed Countries, United Nations

Fourth UN Conference on the LDCs