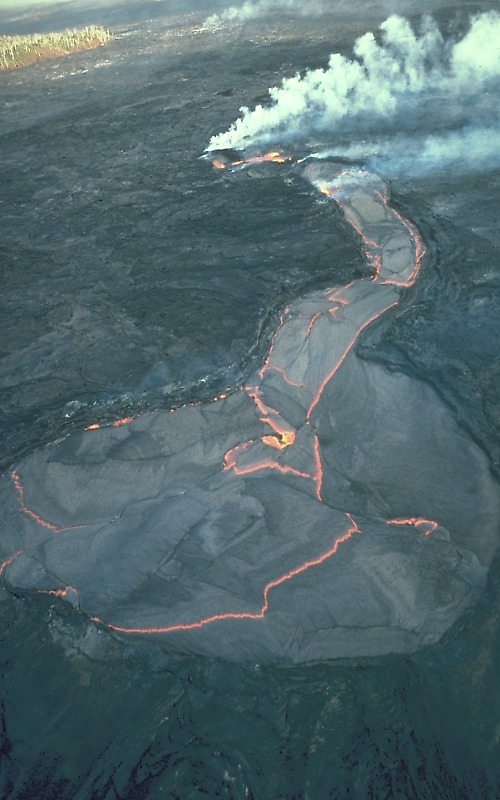 Lava lakes are large volumes of molten [[lava]], usually [[basalt]]ic, contained in a volcanic vent, [[volcanic crater|crater]], or broad depression. The term is used to describe both lava lakes that are wholly or partly molten and those that are solidified (sometimes referred to as ''frozen lava lakes'' in this case).

Lava lakes occur in a variety of volcanic systems, ranging from the basaltic Erta Ale lake in Ethiopia and the basaltic andesite volcano of Villarrica, Chile, to the unique phonolitic lava lake at Mt. Erebus, Antarctica. Lava lakes have been observed to exhibit a range of behaviours. A "constantly circulating, apparently steady-state" lava lake was observed during the 1969–1971 Mauna Ulu eruption of Kilauea, Hawaii. By contrast, a lava lake at the 1983–1984 Puʻu ʻŌʻō eruption of Kilauea displayed cyclic behaviour with a period of 5–20 minutes; gas "pierced the surface" of the lake, and the lava rapidly drained back down the conduit before the onset of a new phase of lake activity. The behaviour observed is influenced by the combined effects of pressure within the reservoir, exsolution and decompression of gas bubbles within the conduit and, potentially, exsolution of bubbles within the magma reservoir. Superimposed upon this is the effect of bubbles rising through the liquid, and coalescence of bubbles within the conduit. The interactions of these effects can create either a steady-state recirculating lake, or a lake level that periodically rises and then falls.

Persistent lava lakes are a rare phenomenon. Only a few volcanoes have hosted persistent or near-persistent lava lakes during recent decades: *Erta Ale, Ethiopia *Ambrym, Vanuatu *Mount Yasur, Vanuatu *Mount Erebus, Ross Island, Antarctica *Kīlauea, Big Island, Hawaii *Mount Nyiragongo, Democratic Republic of the Congo *Masaya volcano, Nicaragua *Mount Michael, Saunders Island, South Sandwich Islands The lava lakes at Ambrym volcano disappeared after a large eruption in December 2018. Kīlauea had two persistent lava lakes: one in the Halemaʻumaʻu vent cavity within the summit caldera, and another within the Puʻu ʻŌʻō cone located on the east rift zone of the volcano. In May 2018, both of these lava lakes disappeared as a result of increased activity in Kīlauea's east rift zone. The lava lake at Halemaʻumaʻu returned in December 2020, after Kīlauea's first eruption in over two years. Nyiragongo's lava lake has usually been the largest and most voluminous in recent history, reaching 700 meters wide in 1982, although Masaya is believed to have hosted an even larger lava lake at the time of the Spanish conquest, being 1,000 meters wide in 1670. The lava lake at Masaya came back in January 2016. In addition to the aforementioned persistent lava lakes, a certain number of occurrences of temporary lava lakes (sometimes called ''lava ponds'' or ''lava pools'', depending on their size and nature) have also been observed and are listed in the following table.

List of volcanoes having displayed past or present lava lake activity

Into the mouth of a volcano
video footage of lava lake in Vanuatu's Marum volcano Category:Volcanic landforms