In humans and other primates, the knee joins the thigh with the leg and consists of two joints: one between the femur and tibia (tibiofemoral joint), and one between the femur and patella (patellofemoral joint). It is the largest joint in the human body. The knee is a modified hinge joint, which permits flexion and extension as well as slight internal and external rotation. The knee is vulnerable to injury and to the development of osteoarthritis. It is often termed a ''compound joint'' having tibiofemoral and patellofemoral components. (The fibular collateral ligament is often considered with tibiofemoral components.) 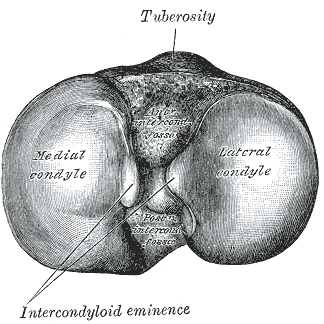 The knee is a modified hinge joint, a type of synovial joint, which is composed of three functional compartments: the patellofemoral articulation, consisting of the patella, or "kneecap", and the patellar groove on the front of the femur through which it slides; and the medial and lateral tibiofemoral articulations linking the femur, or thigh bone, with the tibia, the main bone of the lower leg. The joint is bathed in synovial fluid which is contained inside the synovial membrane called the joint capsule. The posterolateral corner of the knee is an area that has recently been the subject of renewed scrutiny and research. The knee is the largest joint and one of the most important joints in the body. It plays an essential role in movement related to carrying the body weight in horizontal (running and walking) and vertical (jumping) directions. At birth, the kneecap is just formed from cartilage, and this will ossify (change to bone) between the ages of three and five years. Because it is the largest sesamoid bone in the human body, the ossification process takes significantly longer.

The main articular bodies of the femur are its lateral and medial condyles. These diverge slightly distally and posteriorly, with the lateral condyle being wider in front than at the back while the medial condyle is of more constant width. The radius of the condyles' curvature in the sagittal plane becomes smaller toward the back. This diminishing radius produces a series of involute midpoints (i.e. located on a spiral). The resulting series of transverse axes permit the sliding and rolling motion in the flexing knee while ensuring the collateral ligaments are sufficiently lax to permit the rotation associated with the curvature of the medial condyle about a vertical axis. The pair of tibial condyles are separated by the intercondylar eminence composed of a lateral and a medial tubercle. The patella also serves an articular body, and its posterior surface is referred to as the trochlea of the knee. It is inserted into the thin anterior wall of the joint capsule. On its posterior surface is a lateral and a medial articular surface, both of which communicate with the patellar surface which unites the two femoral condyles on the anterior side of the bone's distal end.

The articular capsule has a synovial and a fibrous membrane separated by fatty deposits. Anteriorly, the synovial membrane is attached on the margin of the cartilage both on the femur and the tibia, but on the femur, the suprapatellar bursa or recess extends the joint space proximally. The suprapatellar bursa is prevented from being pinched during extension by the articularis genus muscle. Behind, the synovial membrane is attached to the margins of the two femoral condyles which produces two extensions similar to the anterior recess. Between these two extensions, the synovial membrane passes in front of the two cruciate ligaments at the center of the joint, thus forming a pocket direct inward.

Cartilage is a thin, elastic tissue that protects the bone and makes certain that the joint surfaces can slide easily over each other. Cartilage ensures supple knee movement. There are two types of joint cartilage in the knees: fibrous cartilage (the meniscus) and hyaline cartilage. Fibrous cartilage has tensile strength and can resist pressure. Hyaline cartilage covers the surface along which the joints move. Collagen fibres within the articular cartilage have been described by Benninghoff as arising from the subchondral bone in a radial manner, building so called Gothic arches. On the surface of the cartilage these fibres appear in a tangential orientation and increase the abrasion resistance. There are no blood vessels inside of the hyaline cartilage, the alimentation is performed per diffusion. Synovial fluid and the subchondral bone marrow serve both as nutrition sources for the hyaline cartilage. Lack of at least one source induces a degeneration. Cartilage will wear over the years. Cartilage has a very limited capacity for self-restoration. The newly formed tissue will generally consist of a large part of fibrous cartilage of lesser quality than the original hyaline cartilage. As a result, new cracks and tears will form in the cartilage over time.

The articular disks of the knee-joint are called menisci because they only partly divide the joint space. These two disks, the medial meniscus and the lateral meniscus, consist of connective tissue with extensive collagen fibers containing cartilage-like cells. Strong fibers run along the menisci from one attachment to the other, while weaker radial fibers are interlaced with the former. The menisci are flattened at the center of the knee joint, fused with the synovial membrane laterally, and can move over the tibial surface. The menisci serve to protect the ends of the bones from rubbing on each other and to effectively deepen the tibial sockets into which the femur attaches. They also play a role in shock absorption, and may be cracked, or torn, when the knee is forcefully rotated and/or bent.

The ligaments surrounding the knee joint offer stability by limiting movements and, together with the menisci and several bursae, protect the articular capsule.

The patellar ligament connects the patella to the tuberosity of the tibia. It is also occasionally called the patellar tendon because there is no definite separation between the quadriceps tendon (which surrounds the patella) and the area connecting the patella to the tibia. This very strong ligament helps give the patella its mechanical leverage and also functions as a cap for the condyles of the femur. Laterally and medially to the patellar ligament the lateral and medial retinacula connect fibers from the vasti lateralis and medialis muscles to the tibia. Some fibers from the iliotibial tract radiate into the lateral retinaculum and the medial retinaculum receives some transverse fibers arising on the medial femoral epicondyle. The medial collateral ligament (MCL a.k.a. "tibial") stretches from the medial epicondyle of the femur to the medial tibial condyle. It is composed of three groups of fibers, one stretching between the two bones, and two fused with the medial meniscus. The MCL is partly covered by the pes anserinus and the tendon of the semimembranosus passes under it. It protects the medial side of the knee from being bent open by a stress applied to the lateral side of the knee (a valgus force). The fibular collateral ligament (LCL a.k.a. "fibular") stretches from the lateral epicondyle of the femur to the head of fibula. It is separate from both the joint capsule and the lateral meniscus. It protects the lateral side from an inside bending force (a varus force). The anterolateral ligament (ALL) is situated in front of the LCL. Lastly, there are two ligaments on the dorsal side of the knee. The oblique popliteal ligament is a radiation of the tendon of the semimembranosus on the medial side, from where it is direct laterally and proximally. The arcuate popliteal ligament originates on the apex of the head of the fibula to stretch proximally, crosses the tendon of the popliteus muscle, and passes into the capsule.

The knee permits flexion and extension about a virtual transverse axis, as well as a slight medial and lateral rotation about the axis of the lower leg in the flexed position. The knee joint is called "mobile" because the femur and lateral meniscus move over the tibia during rotation, while the femur rolls and glides over both menisci during extension-flexion. The center of the transverse axis of the extension/flexion movements is located where both collateral ligaments and both cruciate ligaments intersect. This center moves upward and backward during flexion, while the distance between the center and the articular surfaces of the femur changes dynamically with the decreasing curvature of the femoral condyles. The total range of motion is dependent on several parameters such as soft-tissue restraints, active insufficiency, and hamstring tightness.

With the knee extended both the lateral and medial collateral ligaments, as well as the anterior part of the anterior cruciate ligament, are taut. During extension, the femoral condyles glide and roll into a position which causes the complete unfolding of the tibial collateral ligament. During the last 10° of extension, an obligatory terminal rotation is triggered in which the knee is rotated medially 5°. The final rotation is produced by a lateral rotation of the tibia in the non-weight-bearing leg, and by a medial rotation of the femur in the weight-bearing leg. This terminal rotation is made possible by the shape of the medial femoral condyle, assisted by contraction of the popliteus muscle and the iliotibial tract and is caused by the stretching of the anterior cruciate ligament. Both cruciate ligaments are slightly unwinded and both lateral ligaments become taut. 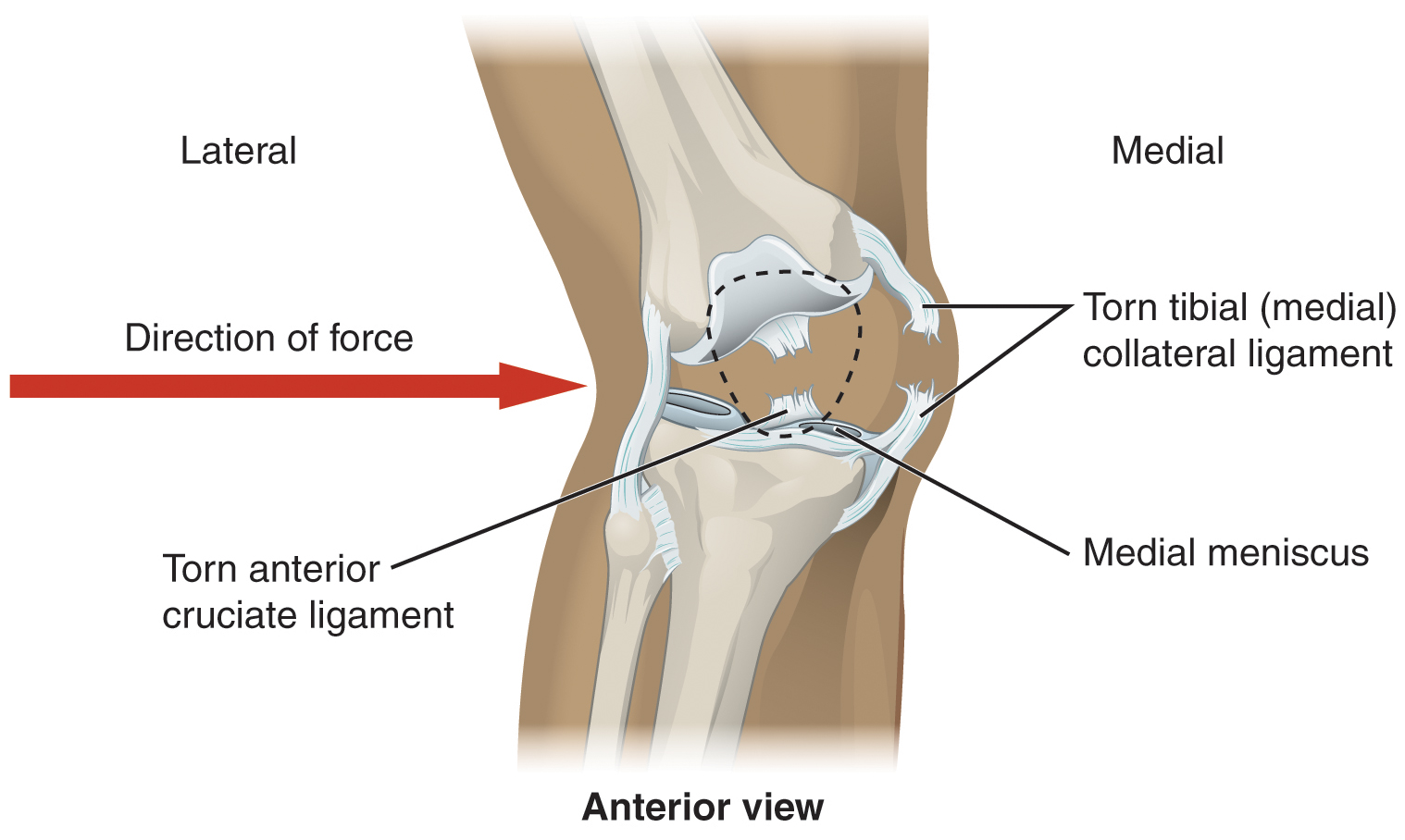 Knee pain is caused by trauma, misalignment, and degeneration as well as by conditions like arthritis. The most common knee disorder is generally known as patellofemoral syndrome. The majority of minor cases of knee pain can be treated at home with rest and ice but more serious injuries do require surgical care. One form of patellofemoral syndrome involves a tissue-related problem that creates pressure and irritation in the knee between the patella and the trochlea (patellar compression syndrome), which causes pain. The second major class of knee disorder involves a tear, slippage, or dislocation that impairs the structural ability of the knee to balance the leg (patellofemoral instability syndrome). Patellofemoral instability syndrome may cause either pain, a sense of poor balance, or both. Prepatellar bursitis also known as ''housemaid's knee'' is painful inflammation of the prepatellar bursa (a frontal knee bursa) often brought about by occupational activity such as roofing. Age also contributes to disorders of the knee. Particularly in older people, knee pain frequently arises due to osteoarthritis. In addition, weakening of tissues around the knee may contribute to the problem. Patellofemoral instability may relate to hip abnormalities or to tightness of surrounding ligaments.