Click Here for Items Related To - Kingdom of the Netherlands

The Kingdom of the Netherlands originated in the aftermath of French Emperor Napoleon I's defeat in 1815. In that year the Netherlands regained its independence from France under its First French Empire, which had annexed its northern neighbour in 1810, as the Sovereign Principality of the United Netherlands. The great powers of Europe, united against Napoleonic France, had decided in the secret treaty of the London Protocol to establish a single state in the territories that were previously the Dutch Republic/Batavian Republic/Kingdom of Holland, the Austrian Netherlands and the Prince-Bishopric of Liège, awarding rule over this to William, Prince of Orange and Nassau, although the southern territories remained under Prussian (German) rule until Napoleon's return from his first exile on Elba ("Hundred Days"). In March 1815, amidst the turmoil of the Hundred Days, the Sovereign Prince William of Orange and Nassau adopted the style of "King of the Netherlands". Following Napoleon's second defeat at the Battle of Waterloo in June 1815, the Vienna Congress supplied international recognition of William's unilateral move. The new King of the Netherlands was also made Grand Duke of Luxembourg, a part of the Kingdom that was, at the same time, a member state of the German Confederation.

The Kingdom celebrated its bicentennial in a series of festive occasions spanning from 2013 to 2015, the last being the year of the actual 200th anniversary of the Kingdom.

The Netherlands is a representative parliamentary democracy organised as a unitary state. Its administration consists of the Monarch and the Council of Ministers, which is headed by a Prime Minister (currently Mark Rutte). The people are represented by the States General of the Netherlands, which consists of a House of Representatives and a Senate. The Netherlands is divided into 12 provinces: Drenthe, Flevoland, Friesland, Gelderland, Groningen, Limburg, Noord-Brabant, Noord-Holland, Overijssel, Utrecht, Zeeland, and Zuid-Holland. The provinces are divided into municipalities. The Netherlands has the euro as its currency, except in the special municipalities of the Caribbean Netherlands (BES islands), where the Netherlands Antillean guilder was replaced by the U.S. dollar in 2011.

The special municipalities of Bonaire, Sint Eustatius, and Saba (referred to as Caribbean Netherlands or ''BES islands'') are part of the Netherlands proper but are not part of any province. They resemble ordinary Dutch municipalities in most ways (with a mayor, aldermen, and a municipal council, for example) and are subject to the ordinary Dutch legislative process. Residents of these three islands are also able to vote in Dutch national and European elections. There are, however, some derogations for these islands. Social security, for example, is not on the same level as it is in the Netherlands proper. In November 2008 it was decided to introduce the U.S. dollar in the three islands. The date of introduction was 1 January 2011. The Netherlands carries the risk of exchange rate fluctuations regarding cash flows between the state and the islands.

Aruba, with its own constitution, is a representative parliamentary democracy organised as a unitary state. Its administration consists of the Governor, who represents the Monarch, and the (Aruban) Council of Ministers, headed by a Prime Minister. The sovereign people of Aruba are represented by 21 parliamentarians in the Parliament of Aruba. The Governor of Aruba is Alfonso Boekhoudt, and the Prime Minister is Evelyn Wever-Croes. It has its own Central Bank and currency, the Aruban florin, linked to the U.S. dollar; the U.S. dollar is accepted almost everywhere on the island. Aruba has two official languages: its own national language Papiamento and the Kingdom of the Netherlands' Dutch language.

Curaçao is a centralised unitary state, with similar administrative characteristics to Aruba. It has the Netherlands Antillean guilder as its currency.

Sint Maarten is a centralised unitary state, with similar administrative characteristics to Aruba. It has the Antillean Guilder as its currency. Unlike the other Dutch Caribbean countries and special municipalities, Sint Maarten covers only part of an island. It consists of roughly the southern half of the divided island of Saint Martin. The northern half of the island is the French Collectivity of Saint Martin.

The legislature of the Kingdom consists of the States General of the Netherlands and the Government. Articles 14, 16 and 17 of the Charter give some participation to the parliaments of the Aruba, Curaçao, and Sint Maarten.

Article 13 of the Charter specifies that there is a Council of State of the Kingdom. It is (as all institutions of the Kingdom) regulated in the Constitution, but the Charter implies that at the request of Aruba, Curaçao, or Sint Maarten, a member from each of these islands can be included in the Council of State. Aruba is currently exercising this right. This has not always been the case; the Netherlands Antilles had no member until 1987 and Aruba had none until 2000. Sint Maarten's first member of the Council of State will be former Lieutenant Governor Dennis Richardson.

The Hoge Raad der Nederlanden is the supreme court of the Kingdom by virtue of the Cassation regulation for the Netherlands Antilles and Aruba. The basis for this regulation is article 23 of the Charter. The second paragraph of that article specifies that if an overseas country of the Kingdom so requests, the Kingdom Act should provide for an additional court member from that country. To date, neither Aruba, Curaçao, nor Sint Maarten has used this right. According to Article 39 of the Charter, "civil and commercial law, the law of civil procedure, criminal law, the law of criminal procedure, copyright, industrial property, the office of notary, and provisions concerning weights and measures shall be regulated as far as possible in a similar manner in the Netherlands, Aruba, Curaçao and Sint Maarten". The Article further stipulates that when a drastic amendment of the existing legislation in regard to these matters is proposed, the proposal shall not be submitted to or considered by a representative assembly until the Governments in the other countries have had the opportunity to express their views on the matter.

Mutual arbitration between the constituent countries and the Kingdom

In case of a conflict between a constituent country and the Kingdom, Article 12 of the Charter prescribes an administrative reconciliation procedure. This was often deemed a democratic deficit of the Kingdom, leading to the adoption of an amendment to the Charter, which entered into force on 10 October 2010. The new Article 12a specifies that in addition to the administrative reconciliation procedure, "by Kingdom Act measures shall be made allowing for the arbitration of certain conflicts, as specified by Kingdom Act, between the Kingdom and the countries." The imperative formulation was the result of an amendment in the Chamber of Representatives by special delegates Evelyna Wever-Croes and J.E. Thijsen of Aruba; the original formulation was "by Kingdom Act measures ''can'' be made". The new Article 38a allows for measures to be made for arbitration between countries as well. In contrast with Article 12a, this article is not imperatively formulated.

Article 3 of the Charter specifies the Affairs of the Kingdom: * Maintenance of the independence and the defence of the Kingdom; * Foreign relations; * Netherlands nationality; * Regulation of the orders of chivalry, the flag and the coat of arms of the Kingdom; * Regulation of the nationality of vessels and the standards required for the safety and navigation of seagoing vessels flying the flag of the Kingdom, with the exception of sailing ships; * Supervision of the general rules governing the admission and expulsion of Netherlands nationals; * General conditions for the admission and expulsion of aliens; * Extradition. One additional Kingdom affair is specified in article 43(2): * The safeguarding of fundamental human rights and freedoms, legal certainty and good governance shall be a Kingdom affair. Paragraph 2 of Article 3 specifies that "other matters may be declared to be Kingdom affairs in consultation". These Kingdom affairs are only taken care of by the Council of Ministers of the Kingdom of the Netherlands, if the affair affects Aruba, Curaçao or St. Maarten. Article 14, paragraph 3, of the Charter, foresees the handling of Kingdom affairs in all other cases by the Netherlands. On the basis of Article 38, the countries of the Kingdom can decide to adopt a Kingdom Act outside of the scope of the aforementioned Kingdom affairs. Such acts are referred to as Consensus Kingdom Acts, as they require the consent of the parliaments of Aruba, Curaçao and St. Maarten.

Despite being of a constitutional nature, some other states have similar properties. In particular, the Kingdom of Denmark consists of Denmark, Greenland, and the Faroe Islands; the Realm of New Zealand consists of New Zealand, the Cook Islands, Niue, Tokelau, and the Ross Dependency. These comparisons are not exact; for instance, aside from the Queen of New Zealand, there is no constitutional structure shared between New Zealand, the Cook Islands, and Niue. Other states also have multiple territories, but such territories are distinct. Some states, such as the United Kingdom and its overseas territories, as well as the United States and its insular areas, do not consider their external territories as integral parts of the state. Other states, such as the Commonwealth of Australia, do treat their external territories as integral components, but have only one country/nationality level equivalent to the state.


Relationship with the European Union


Constitutional reform of the Netherlands Antilles


Distinction between the Netherlands and the Kingdom 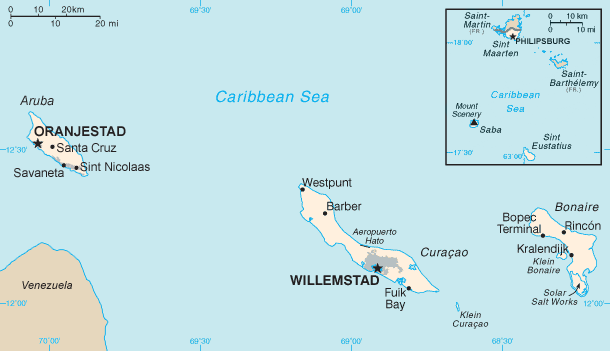 The Kingdom of the Netherlands covers a total area of ; and a land area of . The Kingdom of the Netherlands has land borders with Belgium, Germany (both in the European Netherlands), and France (on Saint Martin). About one quarter of the Netherlands lies below sea level, as much land has been reclaimed from the sea. Dikes were erected to protect the land from flooding. Previously, the highest point of the Netherlands was the Vaalserberg in Limburg at only , but with the constitutional reform of 10 October 2010 this changed as Saba became part of the Netherlands as a special municipality, and its Mount Scenery () took the place of the Vaalserberg. The Caribbean parts of the Kingdom consist of two zones with different geographic origins. The Leeward Islands (Saba, Sint Eustatius and Sint Maarten) are all of volcanic origin and hilly, leaving little ground suitable for agriculture. The Leeward Antilles (Aruba, Bonaire and Curaçao) are largely lacking in volcanic activity: the island arc occurs along the deformed southern edge of the Caribbean Plate and was formed by the plate's subduction under the South American Plate. The Caribbean islands have a tropical climate, with warm weather all year round. The Leeward Islands are subject to hurricanes in the summer months. The European part of the Netherlands has a moderate maritime climate, with cool summers and mild winters.


Official English website of the government of the Netherlands

Official Dutch website of the government of the Netherlands