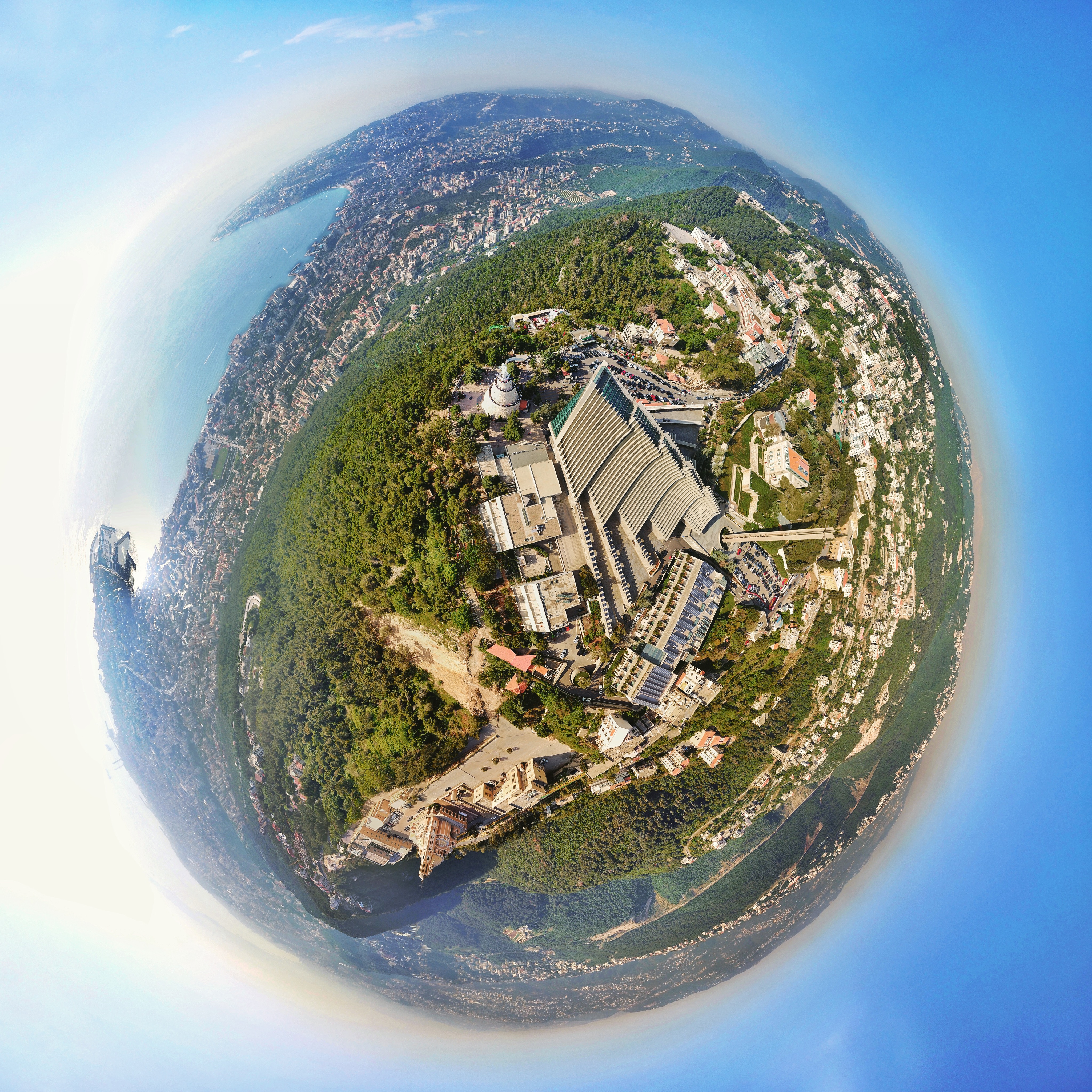 Jounieh ( ar|جونيه, or ''Juniya'', ) is a coastal city in Keserwan District, about north of Beirut, Lebanon and is part of Mount Lebanon. Jounieh is known for its seaside resorts and bustling nightlife, as well as its old stone souk, ferry port, paragliding site and gondola lift (''le téléphérique''), which takes passengers up the mountain to the shrine of Our Lady of Lebanon in Harissa. Above Jounieh, and on the way to Harissa, a small hill named Bkerké ( ar|بكركي|links=no, or ''Bkerki''), overlooking the Jounieh bay, is the seat of the Patriarch of the Maronite Catholic Church of Lebanon. Residents of Jounieh and the surrounding towns are overwhelmingly Maronite Catholics. Maameltein is a district of the city. 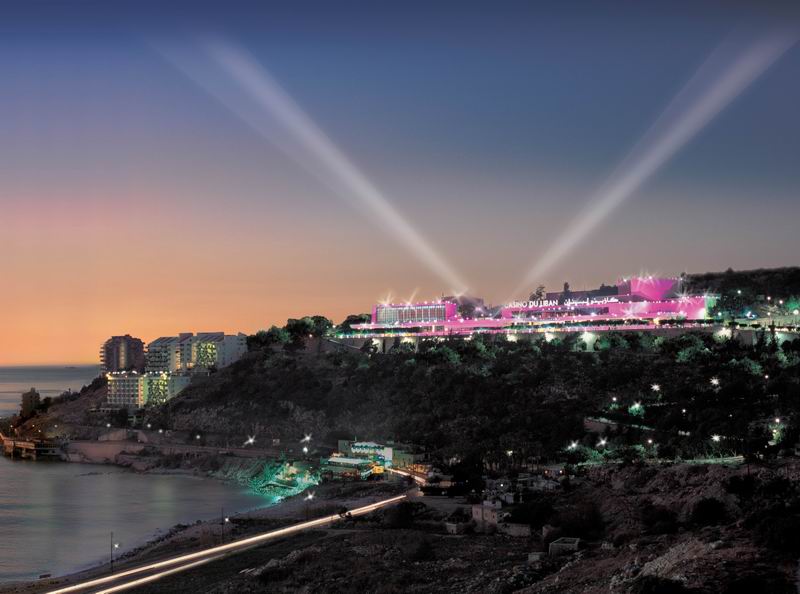 thumb|Paragliding over the Jounieh Bay In the sixth part of ''The Introduction to Jounieh in the Mid Nineteenth Century'', Professor Butrus Al-Boustani said: “Jounieh is a place on the Keserwan coast which has warehouses, stores, and a dye house. Ships and boats bring supplies and its grain trade is very popular. Thus a district of the following villages: Sarba, Ghadir, and Harat Sakhr was named for it. Its total population is 2,500. Jounieh itself is not a residential area but mainly a commercial district whose workers come from neighboring towns.” Jounieh was connected with neighboring areas by roads built for carriages. So it was connected with Bkerké and beyond it during the rule of Dawud Basha, the ruler of Mount Lebanon. It was connected to Ghazir between 1867 and 1868 despite the objection of Ghazir’s residents. Another road connected Jounieh to the Beirut Bridge during the rule of Rustum Basha. To the north it was connected by a carriage’s road until Batroun during the rule of Wasa Basha (1883–1892). In 1892, Jounieh was connected to Beirut via a railroad that had stations between the two locations, three of which in Jounieh and its environs: Sarba, Jounieh, and Mu’amilitain at the end of the line, which facilitated the transportation of goods and passengers from and to the Governorate of Beirut. In 1876, the number of shops exceeded 300, five silk factories, three rest houses, a mill, three juice factories, an artificial ice factory, a bank known by its owner's name "Bank Baghos", and a group of small sailboat construction sites. In 1906, according to the ''Guide to Lebanon'' by Ibrahim Beik Al-Soud, the population of Jounieh was 2,400, and it had a silk factory owned by the Nasras, a silkworms choker owned by Moussa de Franj, a silk factory owned by the heirs of Rizkallah and Abdul Ahad Khadra which had 190 wheels and produced 10,000 cocoons, 330 domestic animals, and owned 80 carriages. According to the records of the Keserwan Governorate, the town of Ghadir, in 1914, had 433 corporations and its population was 1,263. The town of Sarba had 213 commercial institutions and its population was 1,714. In Harat Sakhr, there were 165 corporations and its population was 808. In Sahil ‘Alma, there were 21 corporations its population reached 187. Jounieh had seen noticeable prosperity after France and the Maronite Patriarchy supported the opening a port for commercial ships which became (with the Al-Nabi Younes Port on the Chouf Coast) the official port of Mount Lebanon. In 1913 and during the Mandate era, Jounieh suffered economic decline and recession as the French administration moved part of Jounieh’s administrative role to the Capital, Beirut. Also Jounieh came out of the First World War weakened by famine and economic stagnation. So several of its inhabitants were forced to move to the capital or to immigrate, and Jounieh lost most of its expertise. Its social and population development stopped, and its economic development weakened. The 1932 statistics showed 1,286 housed in Jounieh: 371 in Sarba, 434 in Ghadir, 350 houses in Harat Sakhr, and 131 in Sahil ‘Alma. This affected the building industry and records in the town hall showed very limited number of permits given from 1922-1940. The only active sectors in that period were schools, small crafts, and planting of citrus trees, sugar cane, and vegetables. This situation stayed the same until the rule of President Fuad Chehab who outfitted the city with all that it needed to become modern. Jounieh then awakened from its slumber with projects for roads, lighting, modern planning, a stadium, a tourist port, a government house, and infrastructure. President Chehab used a number of experts and engineers headed by the French engineer Ecochard. The talk became of “Monte Carlo of the East” and Jounieh stood out as a bride of the Lebanese coast. In 1959, it started to attract banks, the first which were the Lebanese Commerce Bank and the Lebanese Federal Bank. By 1975 the number of banks reached six and today there are 38 banks in addition to the Lebanese Central Bank which was established in 1879. The area also witnessed an increase in the price of land from an average of seven to nine Lebanese pounds per square meter between 1950 and 1960 to an average of 25 to 35 Lebanese pounds in 1965. The construction sector developed slowly starting from Sarba to Harat Sakhr, and finally the coast of ‘Alma. The buildings also started expanding around the city as the agricultural sector contracted and became confined to the coasts of Kaslik and some orchards in Ghadir, Harat Sakhr and the coast of ‘Alma. In the beginning of the seventies, Jounieh was transformed to a major and complete tourist center with the tourist network around it and on its edges including: Casino du Liban, the cable cars, the Harisa Church, the caverns in Jeita, restaurants, hotels, nightclubs, and the port. With the war of 1975, and the division of Beirut into East and West parts and the escalation of the violence, many people fled to safe areas and were organizing their lives in accordance with the new realities. From 1980 to 1990, Jounieh witnessed a massive migration as a large number of the Beirut traders moved to its markets. Buildings took over its green spaces, and the tourist complexes took over its shores. So its features changed randomly though it benefited from the use of the tourist port for commerce. Today, close to 100,000 people reside in Jounieh. Those who live in its suburbs exceed that number. By the middle of the century, it is predicted that Jounieh will become a suburb of Beirut in a coastal line that forms one city that expands the length of the coastal road at a time when the inhabitants of Lebanon will reach six million plus around the year 2025. Jounieh's modern history includes the largest fireworks show in lebanon, attracting hundreds of thousands every year, Jounieh's firework are organized yearly by jounieh's youth
Fady Fayad

Jounieh has a hot-summer Mediterranean climate (Köppen climate classification ''Csa''). In winter there is much more rainfall than in summer. The average annual temperature in Jounieh is . About of precipitation falls annually.

* Casino du Liban Casino du Liban offers gaming and shows and is located in the northern part of Jounieh, it is also the biggest one in the Middle East. * Lebanese Heritage Museum Lebanese Heritage Museum displays items related to the culture and history of Lebanon. * Téléphérique The ''téléphérique'' is a gondola lift that operates between Jounieh and Harissa. It offers the passengers beautiful panoramic views of the bay of Jounieh and the coast all the way to Beirut. (See Téléphérique de Jounieh page)