John Balliol ( – late 1314), known derisively as ''Toom Tabard'' (meaning "empty coat"), was King of Scots from 1292 to 1296. Little is known of his early life. After the death of Margaret, Maid of Norway, Scotland entered an interregnum during which several competitors for the Crown of Scotland put forward claims. Balliol was chosen from among them as the new King of Scotland by a group of selected noblemen headed by King Edward I of England. Edward used his influence over the process to subjugate Scotland and undermined Balliol's personal reign by treating Scotland as a vassal of England. Edward's influence in Scottish affairs tainted Balliol's reign and the Scottish nobility deposed him and appointed a Council of Twelve to rule instead. This council signed a treaty with France known as the Auld Alliance. In retaliation, Edward invaded Scotland, starting the Wars of Scottish Independence. After a Scottish defeat in 1296, Balliol abdicated and was imprisoned in the Tower of London. Eventually, Balliol was sent to his estates in France and retired into obscurity, taking no more part in politics. Scotland was then left without a monarch until the accession of Robert the Bruce in 1306. John Balliol's son Edward Balliol would later exert a claim to the Scottish throne against the Bruce claim during the minority of Robert's son David.

In Norman French his name was ', in Middle Scots it was ', and in Scottish Gaelic, '. In Scots he was known by the nickname , usually understood to mean "empty coat“ in the sense that he was an ineffective king. Alternatively the word coat may refer to coat of arms; either to the Balliol arms which are a plain shield with an orle, also known as an ''inescutcheon voided'' or because his arms were stripped from his tabard in public.

Little of Balliol's early life is known. He was born between 1248 and 1250 at an unknown location; possibilities include Galloway, Picardy and Barnard Castle, County Durham. He was the son of John, 5th Baron Balliol, Lord of Barnard Castle (and founder of Balliol College, Oxford), and his wife Dervorguilla of Galloway, daughter of Alan, Lord of Galloway and granddaughter of David, Earl of Huntingdon - the brother of William the Lion. From his mother he inherited significant lands in Galloway and claim to Lordship over the Gallovidians, as well as various English and Scottish estates of the Huntingdon inheritance; from his father he inherited large estates in England and France, such as Hitchin, in Hertfordshire.

Accession as King of Scots 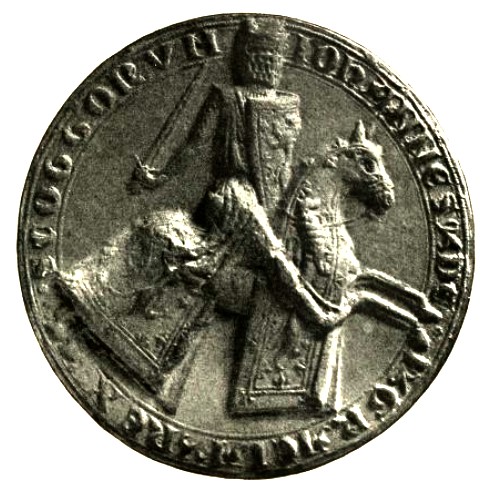 In 1284 Balliol had attended a parliament at Scone, which had recognised Margaret, Maid of Norway, as heir presumptive to her grandfather, King Alexander III. Following the deaths of Alexander III in 1286 and Margaret in 1290, John Balliol was a competitor for the Scottish crown in the Great Cause,