Ivory is a hard, white material from the tusks (traditionally elephants') and teeth of animals, that consists mainly of dentine, one of the physical structures of teeth and tusks. The chemical structure of the teeth and tusks of mammals is the same, regardless of the species of origin. The trade in certain teeth and tusks other than elephant is well established and widespread; therefore, "ivory" can correctly be used to describe any mammalian teeth or tusks of commercial interest which are large enough to be carved or scrimshawed. Besides natural ivory, ivory can also be produced synthetically, hence (unlike natural ivory) not requiring the retrieval of the material from animals. Also, Tagua nuts can also be carved like ivory. Ivory has been valued since ancient times in art or manufacturing for making a range of items from ivory carvings to false teeth, piano keys, fans, and dominoes. Elephant ivory is the most important source, but ivory from mammoth, walrus, hippopotamus, sperm whale, killer whale, narwhal and warthog are used as well. Elk also have two ivory teeth, which are believed to be the remnants of tusks from their ancestors. The national and international trade in natural ivory of threatened species such as African and Asian elephants is illegal. The word ''ivory'' ultimately derives from the ancient Egyptian ''âb, âbu'' ("elephant"), through the Latin ''ebor-'' or ''ebur''.

thumb|An ivory tabernacle featuring the Madonna of Caress, France Both the Greek and Roman civilizations practiced ivory carving to make large quantities of high value works of art, precious religious objects, and decorative boxes for costly objects. Ivory was often used to form the white of the eyes of statues. There is some evidence of either whale or walrus ivory used by the ancient Irish. Solinus, a Roman writer in the 3rd century claimed that the Celtic peoples in Ireland would decorate their sword-hilts with the 'teeth of beasts that swim in the sea'. Adomnan of Iona wrote a story about St Columba giving a sword decorated with carved ivory as a gift that a penitent would bring to his master so he could redeem himself from slavery. The Syrian and North African elephant populations were reduced to extinction, probably due to the demand for ivory in the Classical world. The Chinese have long valued ivory for both art and utilitarian objects. Early reference to the Chinese export of ivory is recorded after the Chinese explorer Zhang Qian ventured to the west to form alliances to enable the eventual free movement of Chinese goods to the west; as early as the first century BC, ivory was moved along the Northern Silk Road for consumption by western nations. Southeast Asian kingdoms included tusks of the Indian elephant in their annual tribute caravans to China. Chinese craftsmen carved ivory to make everything from images of deities to the pipe stems and end pieces of opium pipes. In Japan, ivory carvings became popular in the 17th century during the Edo period, and many ''netsuke'' and ''kiseru'', on which animals and legendary creatures were carved, and ''inro'', on which ivory was inlaid, were made. From the mid-1800s, the new Meiji government's policy of promoting and exporting arts and crafts led to the frequent display of elaborate ivory crafts at World's fair. Among them, the best works were admired because they were purchased by Western museums, wealthy people, and the Japanese Imperial family. The Buddhist cultures of Southeast Asia, including Myanmar, Thailand, Laos and Cambodia, traditionally harvested ivory from their domesticated elephants. Ivory was prized for containers due to its ability to keep an airtight seal. It was also commonly carved into elaborate seals utilized by officials to "sign" documents and decrees by stamping them with their unique official seal. In Southeast Asian countries, where Muslim Malay peoples live, such as Malaysia, Indonesia and the Philippines, ivory was the material of choice for making the handles of kris daggers. In the Philippines, ivory was also used to craft the faces and hands of Catholic icons and images of saints prevalent in the Santero culture. Tooth and tusk ivory can be carved into a vast variety of shapes and objects. Examples of modern carved ivory objects are okimono, netsukes, jewelry, flatware handles, furniture inlays, and piano keys. Additionally, warthog tusks, and teeth from sperm whales, orcas and hippos can also be scrimshawed or superficially carved, thus retaining their morphologically recognizable shapes. Ivory usage in the last thirty years has moved towards mass production of souvenirs and jewelry. In Japan, the increase in wealth sparked consumption of solid ivory ''hanko'' – name seals – which before this time had been made of wood. These ''hanko'' can be carved out in a matter of seconds using machinery and were partly responsible for massive African elephant decline in the 1980s, when the African elephant population went from 1.3 million to around 600,000 in ten years. 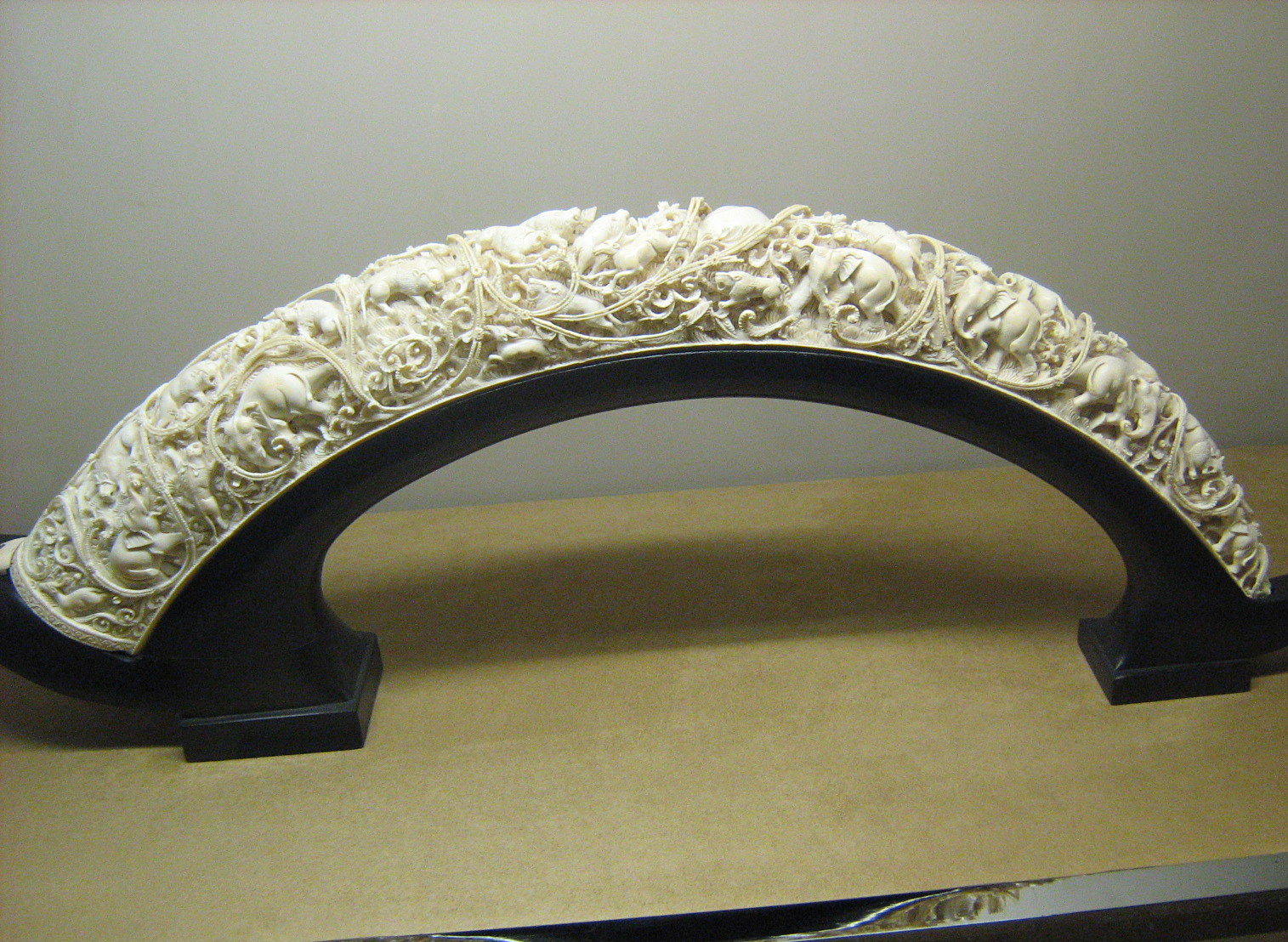 Prior to the introduction of plastics, ivory had many ornamental and practical uses, mainly because of the white color it presents when processed. It was formerly used to make cutlery handles, billiard balls, piano keys, Scottish bagpipes, buttons and a wide range of ornamental items. Synthetic substitutes for ivory in the use of most of these items have been developed since 1800: the billiard industry challenged inventors to come up with an alternative material that could be manufactured; the piano industry abandoned ivory as a key covering material in the 1970s. Ivory can be taken from dead animals – however, most ivory came from elephants that were killed for their tusks. For example, in 1930 to acquire 40 tons of ivory required the killing of approximately 700 elephants. Other animals which are now endangered were also preyed upon, for example, hippos, which have very hard white ivory prized for making artificial teeth. In the first half of the 20th century, Kenyan elephant herds were devastated because of demand for ivory, to be used for piano keys. During the Art Deco era from 1912 to 1940, dozens (if not hundreds) of European artists used ivory in the production of chryselephantine statues. Two of the most frequent users of ivory in their sculptured artworks were Ferdinand Preiss and Claire Colinet.

Owing to the rapid decline in the populations of the animals that produce it, the importation and sale of ivory in many countries is banned or severely restricted. In the ten years preceding a decision in 1989 by CITES to ban international trade in African elephant ivory, the population of African elephants declined from 1.3 million to around 600,000. It was found by investigators from the Environmental Investigation Agency (EIA) that CITES sales of stockpiles from Singapore and Burundi (270 tonnes and 89.5 tonnes respectively) had created a system that increased the value of ivory on the international market, thus rewarding international smugglers and giving them the ability to control the trade and continue smuggling new ivory. Since the ivory ban, some Southern African countries have claimed their elephant populations are stable or increasing, and argued that ivory sales would support their conservation efforts. Other African countries oppose this position, stating that renewed ivory trading puts their own elephant populations under greater threat from poachers reacting to demand. CITES allowed the sale of 49 tonnes of ivory from Zimbabwe, Namibia and Botswana in 1997 to Japan. In 2007, under pressure from the International Fund for Animal Welfare, eBay banned all international sales of elephant-ivory products. The decision came after several mass slaughters of African elephants, most notably the 2006 Zakouma elephant slaughter in Chad. The IFAW found that up to 90% of the elephant-ivory transactions on eBay violated their own wildlife policies and could potentially be illegal. In October 2008, eBay expanded the ban, disallowing any sales of ivory on eBay. A more recent sale in 2008 of 108 tonnes from the three countries and South Africa took place to Japan and China. The inclusion of China as an "approved" importing country created enormous controversy, despite being supported by CITES, the World Wide Fund for Nature and Traffic. They argued that China had controls in place and the sale might depress prices. However, the price of ivory in China has skyrocketed. Some believe this may be due to deliberate price fixing by those who bought the stockpile, echoing the warnings from the Japan Wildlife Conservation Society on price-fixing after sales to Japan in 1997, and monopoly given to traders who bought stockpiles from Burundi and Singapore in the 1980s. A 2019 peer-reviewed study reported that the rate of African elephant poaching was in decline, with the annual poaching mortality rate peaking at over 10% in 2011 and falling to below 4% by 2017. The study found that the "annual poaching rates in 53 sites strongly correlate with proxies of ivory demand in the main Chinese markets, whereas between-country and between-site variation is strongly associated with indicators of corruption and poverty."