Click Here for Items Related To - International Code of Signals

The International Code of Signals (ICS) is an international system of signals and codes for use by vessels to communicate important messages regarding safety of navigation and related matters. Signals can be sent by flaghoist, signal lamp ("blinker"), flag semaphore, radiotelegraphy, and radiotelephony. The International Code is the most recent evolution of a wide variety of maritime flag signalling systems. 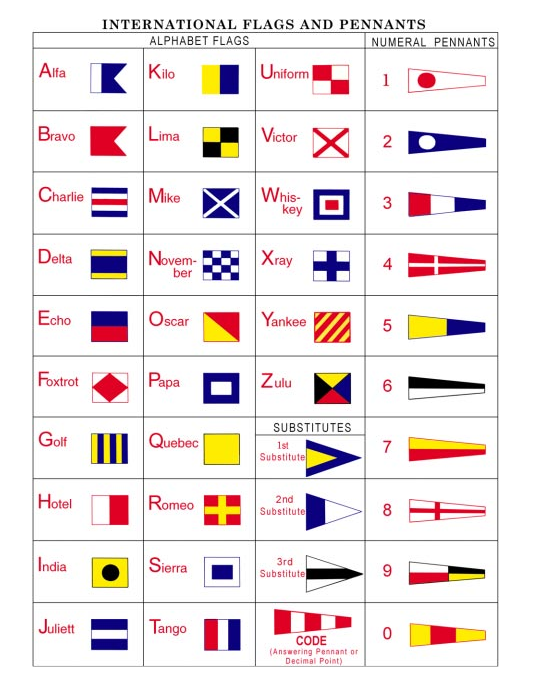 "The purpose of the International Code of Signals is to provide ways and means of communication in situations related essentially to safety of navigation and persons, especially when language difficulties arise." It has done this by first establishing a standardized alphabet (the letters A to Z and the ten digits), along with a spoken form of each letter (to avoid confusing similar-sounding letters, such as 'b', 'p', and 'v'), and associating this alphabet with standardized flags. (See chart to the right.) Combinations of these alphanumeric characters are assigned as codes for various standardized messages. For instance, the master of a ship may wish to communicate with another ship, where their own radio may not be working or the other ship's call sign is not known or the other ship may not be maintaining a radio watch. One simply raises the Kilo flag (see diagram at the top), or sends the Morse Code equivalent (dash-dot-dash) by flashing light; this has the assigned message of "I wish to communicate with you." One practical application of the ICS is that all of the standardized messages come in nine languages (English, French, Italian, German, Japanese, Spanish, Norwegian, and, since 1969, Russian and Greek). This fact is immaterial if the sender and receiver(s) are using different languages; each language has a book with equivalent messages keyed to the same code. This is also useful in radiotelephony, or even when ships are within hailing distance, if there is no common language: a crew member on a burning ship yells "yuliett alfa vour", and a vessel coming to their aid knows exactly what they need — "material for foam fire extinguishers" (that is, the foaming agent). (See :de:Flaggenalphabet for the German version of single-letter signals.) The code also covers procedural aspects (how to initiate a call, the format of a message, how to format date and time, etc.), how naval ships (which usually use their own codes) indicate that they are using the ICS (by flying the code pennant), use in radiotelephony (use of the spoken word "Interco"), and various other matters (such as how an aircraft directs a vessel to another vessel in distress and how to order unidentified submarines to surface).

Prior to 1969, the code was much more extensive, covering a wider range of messages and including a list of five-letter codes for every prominent maritime location in the world. Since 1969, it has been reduced to focus on navigation and safety, including a medical section. Signals can be sorted into three groups: * Single-letter signals which are very urgent, important, or common. * Two-letter signals for other messages, sometimes followed with a numerical "complement" which supplements or modifies the message. * Three-letter signals beginning with "M"; these are the Medical Signal Codes. In some cases, additional characters are added to indicate quantities, bearing, course, distance, date, time, latitude, or longitude. There is also provision for spelling words and for indicating use of other codes. Several of the more common single-letter signals are shown at the right. Two-letter signals cover a broad gamut of situations. Repeated characters can be a problem in flaghoist. To avoid having to carry multiple sets of signal flags, the Code uses three "substitute" (or "repeater") flags. These repeat the flag at the indicated position. For instance, to signal MAA ("I request urgent medical advice" the Mike, Alfa, and 2nd substitute flags would be flown, the substitute indicating a repeat of the second character.

The Medical Signal Code (incorporated in the International Code of Signals since 1930) is a means of providing assistance when medical personnel are not present. Plain language is generally preferred in such cases (presumably via radiotelephone), but the various codes provide a succinct method of communicating to a doctor the nature of the problem where there are language or communication difficulties, and in return the recommended treatment. Even where there are no language problems, the Medical Signal Code is useful in providing a standard method of case description and treatment. There is also a standard list of medicaments (medicines), keyed to a standard ships medicine chest carried by all merchant ships. The Medical signals all begin with the letter "M" (Mike) followed by two more letters, and sometimes with additional numerals or letters. 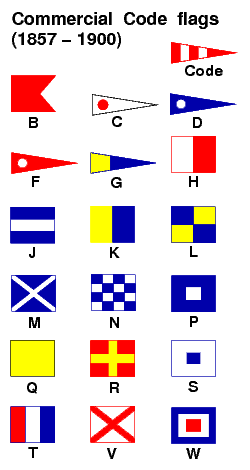 The International Code of Signals was preceded by a variety of naval signals and private signals, most notably Marryat's Code, the most widely used code flags prior to 1857. What is now the International Code of Signals was drafted in 1855 by the British Board of Trade and published in 1857 as the Commercial Code. It came in two parts: the first containing universal and international signals, and the second British signals only. Eighteen separate signal flags (see chart) were used to make over 70,000 possible messages. Vowels were omitted from the set to avoid spelling out any word that might be objectionable in any language, and some little-used letters were also omitted. It was revised by the Board of Trade in 1887, and was modified at the International Conference of 1889 in Washington, D.C. The new international code of signals officially came into worldwide operation on 1 January 1901. At first it was used concurrently with the old system until 1 January 1902, and then used exclusively after 1 January 1903. In this new edition, the number of flags was increased from 18 flags plus a code pennant to 26 flags and a code pennant. The eight new flags represented the vowels A E I O U and the letters X Y Z. A slightly different version was published in Brown's Signalling, 18th Edition, February, 1916, pages 9-28. Charlie, Delta, Echo, Foxtrot and Golf were pennants corresponding to more modern numeral pennants 1, 2, 3, 4 and 5. Otherwise the letters appear to correspond to the more modern formats. The code was severely tested during World War I, and it was found that, "when coding signals, word by word, the occasions upon which signaling failed were more numerous than those when the result was successful." A 1920 meeting of the five Principal Allied and Associated Powers met in Paris and proposed forming the Universal Electrical Communications Union on October 8, 1920 in Washington, D.C. The group suggested revisions to the International Code of Signals, and adopted a phonetic spelling alphabet, but the creation of the organization was not agreed upon. The International Radiotelegraph Conference at Washington in 1927 considered proposals for a new revision of the Code, including preparation in seven languages: English, French, Italian, German, Japanese, Spanish, and Norwegian. This new edition was completed in 1930 and was adopted by the International Radiotelegraph Conference held in Madrid in 1932. The Madrid Conference also set up a standing committee for continual revision of the code. The new version introduced vocabulary for aviation and a complete medical section with the assistance and by the advice of the Office International d'Hygiène Publique. A certain number of signals were also inserted for communications between vessels and shipowners, agents, repair yards, and other maritime stakeholders. The new international code of signals was officially brought into force worldwide on 1 January 1934. Thirteen new flags were introduced, whereby the triangular pennants used for letters, C, D, E, F, and G were replaced with new square flags, and became the numerals 1, 2, 3, 4, and 5. The numerals 6, 7, 8, 9, and 0 were introduced by five new flags, and there were three new substitute flags added. After World War II, the Administrative Radio Conference of the International Telecommunication Union suggested in 1947 that the International Code of Signals should fall within the competence of the Inter-Governmental Maritime Consultative Organization (IMCO), which became the IMO. In January 1959, the First Assembly of IMCO decided that the organization should assume all the functions then being performed by the Standing Committee of the International Code of Signals. The Second Assembly of IMCO 1961 endorsed plans for a comprehensive review of the International Code of Signals to meet the needs of mariners. The revisions were prepared in the previous seven languages plus Russian and Greek. The code was revised in 1964 taking into account recommendations from the 1960 Conference on Safety of Life at Sea (SOLAS) and the 1959 Administrative Radio Conference. Changes included a shift in focus from general communications to safety of navigation, abandonment of the "vocabulary" method of spelling out messages word by word, adaptation to all forms of communication, and elimination of the separate radiotelegraph and geographical sections. It was adopted in 1965. The 1969 English-language version of the code (United States edition, revised 2003) is available online through the National Geospatial-Intelligence Agency (NGA, formerly the National Imagery and Mapping Agency) a
Publication 102
The International Code of Signals is currently maintained by the International Maritime Organization, which published a new print edition in 2005.