The Indus ( ) is a transboundary river of Asia and a trans-Himalayan river of South and East Asia. The river rises in Western Tibet, flows northwest through the Ladakh and Gilgit-Baltistan regions of Kashmir, bends sharply to the left after the Nanga Parbat massif, and flows south-by-southwest through Pakistan, before it empties into the Arabian Sea near the port city of Karachi. The river has a total drainage area exceeding . Its estimated annual flow is around , twice that of the Nile and three times that of the Tigris and Euphrates rivers combined, making it one of the largest rivers in the world in terms of average annual flow. Its left-bank tributary in Ladakh is the Zanskar River, and its left-bank tributary in the plains is the Panjnad River which itself has five major tributaries, namely the Chenab, Jhelum, Ravi, Beas, and Sutlej rivers. Its principal right-bank tributaries are the Shyok, Gilgit, Kabul, Kurram and Gomal rivers. Beginning in a mountain spring and fed with glaciers and rivers in the Himalayan, Karakoram and Hindu Kush ranges, the river supports the ecosystems of temperate forests, plains and arid countryside. The northern part of the Indus Valley, with its tributaries, forms the Punjab region of South Asia, while the lower course of the river ends in a large delta in the southern Sindh province of Pakistan. The river has historically been important to many cultures of the region. The 3rd millennium BC saw the rise of a major urban civilization of the Bronze Age. During the 2nd millennium BC, the Punjab region was mentioned in the Rigveda hymns as ''Sapta Sindhu'' and in the Avesta religious texts as S''aptha Hindu'' (both terms meaning "seven rivers"). Early historical kingdoms that arose in the Indus Valley include Gandhāra, and the Ror dynasty of Sauvīra. The Indus River came into the knowledge of the West early in the classical period, when King Darius of Persia sent his Greek subject Scylax of Caryanda to explore the river, c. 515 BC.

This river was known to the ancient Indians in Sanskrit as ''Sindhu'' and the Persians as ''Hindu'' which was regarded by both of them as "the border river". The variation between the two names is explained by the Old Iranian sound change ''*s'' > ''h'', which occurred between 850 and 600 BCE according to Asko Parpola. From the Persian Achaemenid Empire, the name passed to the Greeks as ''Indós'' (Ἰνδός). It was adopted by the Romans as ''Indus''. Southworth suggests that the name ''Sindhu'' is derived from ''Cintu'', a Dravidian word for date palm, a tree commonly found in Sindh. The meaning of ''Sindhu'' as a "large body of water, sea, or ocean" is a later meaning in Classical Sanskrit. A later Persian name for the river was ''Darya'', which similarly has the connotations of large body of water and sea. Other variants of the name ''Sindhu'' include Assyrian ''Sinda'' (as early as the 7th century BC), Persian ''Ab-e-sind'', Pashto ''Abasind'', Arab ''Al-Sind'', Chinese ''Sintow'', and Javanese ''Santri''. In other languages of the region, the river is known as (Darya-ī Sindh) in Urdu सिन्धु (''Sindhu'') in Hindi, سنڌو (''Sindhu'') in Sindhi, (''Sindh'') in Shahmukhi Punjabi, ਸਿੰਧ ਨਦੀ (''Sindh Nadī'') in Gurmukhī Punjabi, اباسين (''Abāsin'' lit. "Father of Rivers") in Pashto, نهر السند (''Nahar al-Sind'') in Arabic, སེང་གེ་གཙང་པོ། (''singi khamban'' lit. "Lion River" or ''Lion Spring'') in Tibetan, (''Yìndù'') in Chinese, ''Nilab'' in Turki and සින්දු නදී (''Sindhu Nadi'') in Sinhala.

The Indus River provides key water resources for Pakistan's economy – especially the ''breadbasket'' of Punjab province, which accounts for most of the nation's agricultural production, and Sindh. The word Punjab means "land of five rivers" and the five rivers are Jhelum, Chenab, Ravi, Beas and Sutlej, all of which finally flow into the Indus. The Indus also supports many heavy industries and provides the main supply of potable water in Pakistan. The ultimate source of the Indus is in Tibet; the river begins at the confluence of the Sengge Zangbo and Gar Tsangpo rivers that drain the Nganglong Kangri and Gangdise Shan (Gang Rinpoche, Mt. Kailash) mountain ranges. The Indus then flows northwest through Ladakh, India, and Baltistan into Gilgit, just south of the Karakoram range. The Shyok, Shigar and Gilgit rivers carry glacial waters into the main river. It gradually bends to the south and descends into the Punjab plains at Kalabagh, Pakistan. The Indus passes gigantic gorges deep near the Nanga Parbat massif. It flows swiftly across Hazara and is dammed at the Tarbela Reservoir. The Kabul River joins it near Attock. The remainder of its route to the sea is in the plains of the Punjab and Sindh, where the flow of the river becomes slow and highly braided. It is joined by the Panjnad at Mithankot. Beyond this confluence, the river, at one time, was named the ''Satnad River'' (''sat'' = "seven", ''nadī'' = "river"), as the river now carried the waters of the Kabul River, the Indus River and the five Punjab rivers. Passing by Jamshoro, it ends in a large delta to the South of Thatta in the Sindh province of Pakistan The Indus is one of the few rivers in the world to exhibit a tidal bore. The Indus system is largely fed by the snows and glaciers of the Himalayas, Karakoram and the Hindu Kush ranges of Tibet, the Indian states and union territories of Ladakh and Himachal Pradesh and the Gilgit-Baltistan region of Pakistan. The flow of the river is also determined by the seasons – it diminishes greatly in the winter, while flooding its banks in the monsoon months from July to September. There is also evidence of a steady shift in the course of the river since prehistoric times – it deviated westwards from flowing into the Rann of Kutch and adjoining Banni grasslands after the 1816 earthquake. Presently, Indus water flows in to the Rann of Kutch during its floods breaching flood banks. The traditional source of the river is the ''Sênggê Kanbab'' (a.k.a. Sênggê Zangbo, Senge Khabab) or "Lion's Mouth", a perennial spring, not far from the sacred Mount Kailash marked by a long low line of Tibetan chortens. There are several other tributaries nearby, which may possibly form a longer stream than Sênggê Kanbab, but unlike the Sênggê Kanbab, are all dependent on snowmelt. The Zanskar River, which flows into the Indus in Ladakh, has a greater volume of water than the Indus itself before that point. 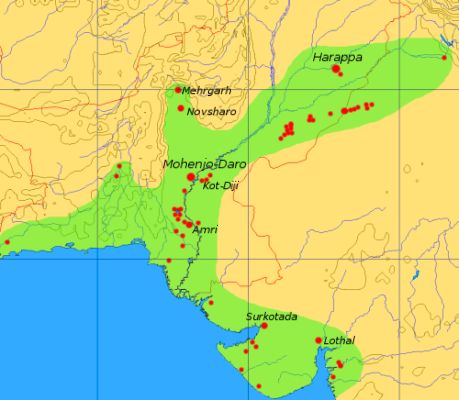 The major cities of the Indus Valley Civilisation, such as Harappa and Mohenjo-daro, date back to around 3300 BC, and represent some of the largest human habitations of the ancient world. The Indus Valley Civilisation extended from across northeast Afghanistan to Pakistan and northwest India, with an upward reach from east of Jhelum River to Ropar on the upper Sutlej. The coastal settlements extended from Sutkagan Dor at the Pakistan, Iran border to Kutch in modern Gujarat, India. There is an Indus site on the Amu Darya at Shortughai in northern Afghanistan, and the Indus site Alamgirpur at the Hindon River is located only from Delhi. To date, over 1,052 cities and settlements have been found, mainly in the general region of the Ghaggar-Hakra River and its tributaries. Among the settlements were the major urban centres of Harappa and Mohenjo-daro, as well as Lothal, Dholavira, Ganeriwala, and Rakhigarhi. Only 40 Indus Valley sites have been discovered on the Indus and its tributaries. The Sutlej, now a tributary of the Indus, in Harappan times flowed into the Ghaggar-Hakra River, in the watershed of which were more Harappan sites than along the Indus. Most scholars believe that settlements of Gandhara grave culture of the early Indo-Aryans flourished in Gandhara from 1700 BC to 600 BC, when Mohenjo-daro and Harappa had already been abandoned. The Rigveda describes several rivers, including one named "Sindhu". The Rigvedic "Sindhu" is thought to be the present-day Indus river. It is attested 176 times in its text, 94 times in the plural, and most often used in the generic sense of "river". In the Rigveda, notably in the later hymns, the meaning of the word is narrowed to refer to the Indus river in particular, e.g. in the list of rivers mentioned in the hymn of ''Nadistuti sukta''. The Rigvedic hymns apply a feminine gender to all the rivers mentioned therein, except for the Brahmaputra. The word "India" is derived from the Indus River. In ancient times, "India" initially referred to those regions immediately along the east bank of the Indus, but by 300 BC, Greek writers including Herodotus and Megasthenes were applying the term to the entire subcontinent that extends much farther eastward. The lower basin of the Indus forms a natural boundary between the Iranian Plateau and the Indian subcontinent; this region embraces all or parts of the Pakistani provinces Balochistan, Khyber Pakhtunkhwa, Punjab and Sindh and the countries Afghanistan and India. The first West Eurasian empire to annex the Indus Valley was the Persian Empire, during the reign of Darius the Great. During his reign, the Greek explorer Scylax of Caryanda was commissioned to explore the course of the Indus. It was crossed by the invading armies of Alexander, but after his Macedonians conquered the west bank—joining it to the Hellenic world, they elected to retreat along the southern course of the river, ending Alexander's Asian campaign. Alexander's admiral Nearchus set out from the Indus Delta to explore the Persian Gulf, until reaching the Tigris River. The Indus Valley were later dominated by the Mauryan and Kushan Empires, Indo-Greek Kingdoms, Indo-Scythians and Hepthalites. Over several centuries Muslim armies of Muhammad bin Qasim, Mahmud of Ghazni, Mohammed Ghori, Tamerlane and Babur crossed the river to invade Sindh and Punjab, providing a gateway to the Indian subcontinent.

The Indus river feeds the Indus submarine fan, which is the second largest sediment body on the Earth. It consists of around 5 million cubic kilometres of material eroded from the mountains. Studies of the sediment in the modern river indicate that the Karakoram Mountains in northern Pakistan and India are the single most important source of material, with the Himalayas providing the next largest contribution, mostly via the large rivers of the Punjab (Jhelum, Ravi, Chenab, Beas and Sutlej). Analysis of sediments from the Arabian Sea has demonstrated that prior to five million years ago the Indus was not connected to these Punjab rivers which instead flowed east into the Ganga and were captured after that time. Earlier work showed that sand and silt from western Tibet was reaching the Arabian Sea by 45 million years ago, implying the existence of an ancient Indus River by that time. The delta of this proto-Indus river has subsequently been found in the Katawaz Basin, on the Afghan-Pakistan border. In the Nanga Parbat region, the massive amounts of erosion due to the Indus river following the capture and rerouting through that area is thought to bring middle and lower crustal rocks to the surface. In November 2011, satellite images showed that the Indus river had re-entered India, feeding Great Rann of Kutch, Little Rann of Kutch and a lake near Ahmedabad known as Nal Sarovar.