File:3D structure of secretory IgA1.png, Two views, one rotated 90 degrees with respect to the other, of the amino acid chains comprising secretory IgA1. Colors are: H-chains (blue and light blue), L-chains (red and light red), J-chain (magenta) and the secretory component (yellow). Coordinates of each backbone carbon atom were derive
PDB entry 3CHN

Immunoglobulin A (IgA, also referred to as sIgA in its secretory form) is an
antibody An antibody (Ab), also known as an immunoglobulin (Ig), is a large, Y-shaped protein used by the immune system to identify and neutralize foreign objects such as pathogenic bacteria and viruses. The antibody recognizes a unique molecule of the p ... 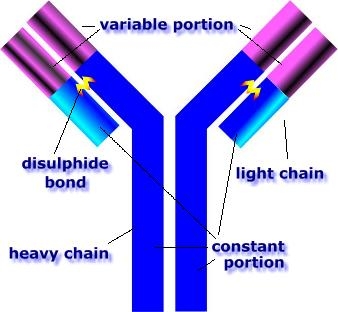 that plays a crucial role in the
immune function The immune system is a network of biological processes that protects an organism from diseases. It detects and responds to a wide variety of pathogens, from viruses to parasitic worms, as well as cancer cells and objects such as wood splinters, d ...
of
mucous membrane A mucous membrane or mucosa is a membrane that lines various cavities in the body and covers the surface of internal organs. It consists of one or more layers of epithelial cells overlying a layer of loose connective tissue. It is mostly of endode ...
s. The amount of IgA produced in association with mucosal membranes is greater than all other types of antibody combined. In absolute terms, between three and five grams are secreted into the intestinal lumen each day. This represents up to 15% of total immunoglobulins produced throughout the body. IgA has two subclasses (IgA1 and IgA2) and can be produced as a monomeric as well as a dimeric form. The IgA dimeric form is the most prevalent and is also called ''secretory IgA'' (sIgA). sIgA is the main
immunoglobulin An antibody (Ab), also known as an immunoglobulin (Ig), is a large, Y-shaped protein used by the immune system to identify and neutralize foreign objects such as pathogenic bacteria and viruses. The antibody recognizes a unique molecule of the p ... 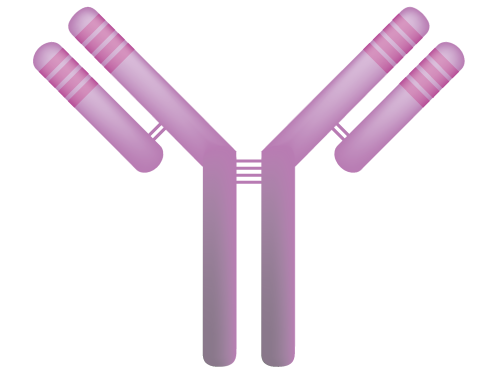 , and
opsonize Opsonins are proteins of the innate and adaptive immune system that facilitate phagocytosis and cell lysis by “marking” antigen. Opsonization, then, is the modification of antigens by opsonins to make them more accessible to phagocytic cells and ...

IgA exists in two isotypes, IgA1 and IgA2. They are both heavily
glycosylated Glycosylation (see also chemical glycosylation) is the reaction in which a carbohydrate, i.e. a glycosyl donor, is attached to a hydroxyl or other functional group of another molecule (a glycosyl acceptor). In biology, glycosylation mainly refers i ...
proteins. While IgA1 predominates in serum (~80%), IgA2 percentages are higher in secretions than in serum (~35% in secretions); the ratio of IgA1 and IgA2 secreting cells varies in the different lymphoid tissues of the human body: * IgA1 is the predominant IgA subclass found in serum. Most lymphoid tissues have a predominance of IgA1-producing cells. * In IgA2, the heavy and light chains are not linked with
disulfide In chemistry, a disulfide refers to a functional group with the structure R−S−S−R′. The linkage is also called an SS-bond or sometimes a disulfide bridge and is usually derived by the coupling of two thiol groups. In biology, disulfide bridg ...
, but with
non-covalentA non-covalent interaction differs from a covalent bond in that it does not involve the sharing of electrons, but rather involves more dispersed variations of electromagnetic interactions between molecules or within a molecule. The chemical energy re ...
bonds. In secretory lymphoid tissues (e.g.,
gut-associated lymphoid tissue Gut-associated lymphoid tissue (GALT) is a component of the mucosa-associated lymphoid tissue (MALT) which works in the immune system to protect the body from invasion in the gut. Owing to its physiological function in food absorption, the mucosal ...
, or GALT), the share of IgA2 production is larger than in the non-secretory lymphoid organs (e.g. spleen, peripheral lymph nodes). Both IgA1 and IgA2 have been found in external secretions like
colostrum Colostrum (known colloquially as beestings, bisnings or first milk) is the first form of milk produced by the mammary glands of mammals (including humans) immediately following delivery of the newborn. Most species will begin to generate colostru ...
, maternal milk,
tears Tears are a clear liquid secreted by the lacrimal glands (tear gland) found in the eyes of all land mammals (except for goats and rabbits). Their functions include lubricating the eyes (basal tears), removing irritants (reflex tears), and aiding ...
and
saliva Saliva (commonly referred to as spit) is an extracellular fluid produced and secreted by salivary glands in the mouth. In humans, saliva is 98% water plus electrolytes, mucus, white blood cells, epithelial cells (from which DNA can be extracted), ...
, where IgA2 is more prominent than in the blood. Polysaccharide antigens tend to induce more IgA2 than protein antigens. Both IgA1 and IgA2 can be in membrane-bound form. (''see
B-cell receptor The B cell receptor (BCR) is a transmembrane protein on the surface of a immunoglobulin._The_cell_membrane.html" style="text-decoration: none;"class="mw-redirect" title="CD79">B cell. A B cell receptor includes both immunoglobulin._The_cell_memb ...
'')

It is also possible to distinguish forms of IgA based upon their location – serum IgA vs. secretory IgA. In secretory IgA, the form found in secretions,
polymers A polymer (; Greek ''poly-'', "many" + ''-mer'', "part") is a substance or material consisting of very large molecules, or macromolecules, composed of many repeating subunits. Due to their broad spectrum of properties, both synthetic and natura ...
of 2–4 IgA
monomersA monomer ( ; ''mono-'', "one" + ''-mer'', "part") is a molecule that can react together with other monomer molecules to form a larger polymer chain or three-dimensional network in a process called polymerization. Classification Monomers can be clas ...
are linked by two additional chains; as such, the
molecular weight A scanning tunneling microscopy image of pentacene molecules, which consist of linear chains of five carbon rings. A molecule is an electrically neutral group of two or more atoms held together by chemical bonds. Molecules are distinguished ...
of slgA is 385,000D. One of these is the
J chain ic antibody molecule (consisting of five base units).1: Base unit. 2: Heavy chains.3: Light chains.4: J chain.5: Intermolecular disulfide bonds. Image:Dimeric IgA schematic 01.svg, 180 px, Schematic of immunoglobulin A d ...
(joining chain), which is a
polypeptide Peptides (from Greek language πεπτός, ''peptós'' "digested"; derived from πέσσειν, ''péssein'' "to digest") are short chains of between two and fifty amino acids, linked by peptide bonds. Chains of fewer than ten or fifteen amino ac ...
of molecular mass 15kD, rich with
cysteine Cysteine (symbol Cys or C; ) is a semiessential proteinogenic amino acid with the formula HOOC-CH-(NH2)-CH2-SH. The thiol side chain in cysteine often participates in enzymatic reactions, as a nucleophile. The thiol is susceptible to oxidation t ...
and structurally completely different from other immunoglobulin chains. This chain is formed in the IgA-secreting cells. The oligomeric forms of IgA in the external (mucosal) secretions also contain a polypeptide of a much larger molecular mass (70 kD) called the
secretory component180 px, Schematic of immunoglobulin A dimer showing L-chain (red), J-chain">Immunoglobulin light chain">L-chain (red), J-chain (magenta) and secretory component (yellow). The secretory component is a component of immunoglobulin A (IgA). Secretor ...
that is produced by
epithelial cells Epithelium () is one of the four basic types of animal tissue, along with connective tissue, muscle tissue and nervous tissue. It is a thin, continuous, protective layer of cells. Epithelial tissues line the outer surfaces of organs and blood v ...
. This molecule originates from the poly-Ig receptor (130 kD) that is responsible for the uptake and transcellular transport of oligomeric (but not monomeric) IgA across the epithelial cells and into secretions such as tears, saliva, sweat and gut fluid.

In the blood, IgA interacts with an
Fc receptor A Fc receptor is a protein found on the surface of certain cells – including, among others, B lymphocytes, follicular dendritic cells, natural killer cells, macrophages, neutrophils, eosinophils, basophils, human platelets, and mast cells&n ...
called FcαRI (or CD89), which is expressed on immune effector cells, to initiate inflammatory reactions. Ligation of FcαRI by IgA containing immune complexes causes antibody-dependent cell-mediated cytotoxicity (ADCC), degranulation of eosinophils and basophils, phagocytosis by monocytes, macrophages, and neutrophils, and triggering of respiratory burst activity by polymorphonuclear leukocytes.

The high prevalence of IgA in mucosal areas is a result of a cooperation between plasma cells that produce polymeric IgA (pIgA), and mucosal epithelial cells that express an immunoglobulin receptor called the polymeric Ig receptor (pIgR). Polymeric IgA (mainly the secretory dimer) is produced by plasma cells in the lamina propria adjacent to mucosal surfaces. It binds to the polymeric immunoglobulin receptor on the basolateral surface of epithelial cells, and is taken up into the cell via endocytosis. The receptor-IgA complex passes through the cellular compartments before being secreted on the Lumen (anatomy), luminal surface of the epithelial cells, still attached to the receptor. Proteolysis of the receptor occurs, and the dimeric IgA molecule, along with a portion of the receptor known as the
secretory component180 px, Schematic of immunoglobulin A dimer showing L-chain (red), J-chain">Immunoglobulin light chain">L-chain (red), J-chain (magenta) and secretory component (yellow). The secretory component is a component of immunoglobulin A (IgA). Secretor ...
– known as sIgA, are free to diffuse throughout the lumen. In the gut, IgA can bind to the mucus layer covering the epithelial cells. In this way, a barrier capable of neutralizing threats before they reach the epithelial cells is formed. Production of sIgA against specific antigens depends on sampling of microfold cell, M cells and underlying dendritic cells, T cell activation, and B cell class switching in GALT, mesenteric lymph nodes, and isolated lymphoid follicles in the small intestine. sIgA primarily acts by blockading epithelial receptors (e.g. by binding their ligands on pathogens), by sterically hindering attachment to epithelial cells, and by immune exclusion. Immune exclusion is a process of agglutinating polyvalent antibody, polyvalent antigens or pathogens by crosslinking them with antibody, trapping them in the mucus layer, and/or clearing them peristalsis, peristaltically. The oligosaccharide chains of the component of IgA can associate with the mucus layer that sits atop epithelial cells.