A hunting license is a regulatory or legal mechanism to control hunting. Hunting may be regulated informally by unwritten law, self-restraint, a moral code, or by governmental laws. The purposes for requiring hunting licenses include the protection of natural treasures, and raising tax revenue (often, but not always, to dedicated funds).

Hunting licenses are millennia old. Amongst the first hunting laws in the Common law tradition was from the time of William the Conqueror (reign in England starting 1066). In the ''Peterborough Chronicle'' entry of 1087, The Rime of King William reported in verse that: :Whoever killed a hart or a hind :Should be blinded. This was because "William the Conqueror's moral life lives in the landscape. His control of the forest mirrors his control of the people, and his establishment of hunting laws reveals the dissonance between his love for animals and his contempt for the populace: ... :He loved the wild animals :As if he were their father.

Hunting licenses have several purposes. These reasons include: public safety (especially of children, both as hunters and bystanders), regulation and conservation of wild animals, revenue for the sovereign state, and containing the transmission of animal-borne diseases (such as Lyme disease and rabies). The safety issues are especially highlighted in urban areas and shopping districts. For example, after in an incident in November 2012 whereby a man allegedly shot at a deer in a Walmart parking lot in Pennsylvania, he was charged with "reckless endangerment, ... hunting without a license, shooting on or across highways and unlawful killing or taking of big game."

All firearm owners and users in Australia require a firearm's licence, but normally do not require a licence to hunt. Most target species are feral or introduced species, and almost all native animals are protected. Landowners may obtain a "Destruction Permit" to kill or remove native species when their numbers impact agriculture. Hunting in New South Wales national parks requires a R-licence issued by the Game Council, but (as of mid-2013) this situation has been suspended pending review. Professional hunters are issued what is sometimes referred to as a D-licence, but rather than being a hunting licence this is a category of firearms that includes semi-automatics and large capacity magazines.

Hunting regulation and licensing falls under both provincial/territorial and federal jurisdiction. The federal government is responsible for protecting migratory birds and nationally significant wildlife habitat, the regulation for endangered species and the international wildlife issues and treaties (i.e. CITES) for Canada. For example, Migratory Game Bird Hunting licence is issued by the Canadian Wildlife Service, an agency of Environment Canada. All other matters fall under the provincial/territorial jurisdiction. The use of firearms in hunting is also separated into provincial/territorial and federal jurisdiction. Whereas the Canadian Firearms Program will determine who is eligible for a Possession and Acquisition Licence and issuance of firearm registration certificates, it is the provincial/territorial government's responsibility to regulate when and how the firearms can be used in hunting animals. In Quebec hunter education and licensing is managed by the Fédération Québécoise de la Faune. Sécurité Nature, a program managed by the FQF, offers a variety of hunting education courses that allow residents to hunt legally after obtaining their licence and a permit at designated outlets (most hunting & fishing stores, Canadian Tires, etc.) for a fee. 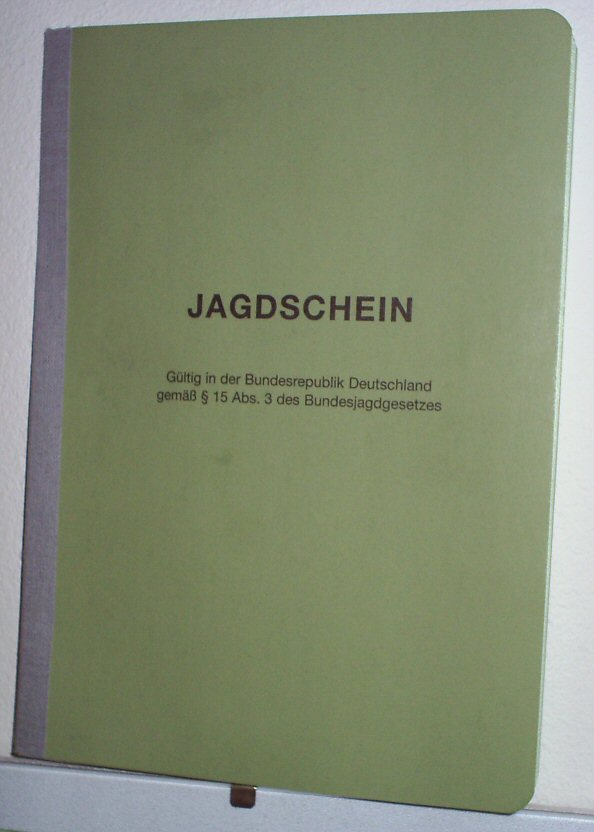 A German hunting license is a certificate that grants its holder the exercise of hunting within legal ordinances. It is also the precondition to own hunting arms and ammunition (unlimited number of rifles/shotguns and up to two handguns). The actual right to exercise hunting in a specific area is entitled to the respective landowners (if they own an area of more than , otherwise all landowners of a municipality are integrated into an association) who may use their right for themselves or lease it. Depending on size and value of a hunting area a typical leasing rate may vary from about US$10–100 per acre per year. Additionally the lesse has to pay the landowner any damage by deers, wild hogs etc. The right to hunt is connected to the duty to care for all kind of animals listed by the hunting laws. For several species such as deers plans have to be developed by hunters and authorities, how many animals of a specified class and age may (or have to) be killed within a certain period of time. The purpose of the hunting license is to ensure that only well trained persons may exercise hunting. Applicants must fulfill the following requirements: * Successful completion of a hunting exam, * Certificate of a liability insurance for hunters, * Personal trustworthiness (§ 5 German Weapons Act), * Applicants must be at least 16 years for a Youth Hunting License, otherwise 18 years, * Flawless Criminal record. The hunting exam is a test of expertise with a high failure rate. To pass it, each applicant has to participate in a comprehensive, difficult instruction course which consists largely of the areas shooting (shotgun and rifle), theory (esp. weaponry, local wildlife and habitat) and practice. In practice the German system of examination for deer hunters (stalkers) is very much in line with the English DMQ level DSC2. Over the last ten years or so European countries in general have made efforts to harmonise the previously fragmented rules and regulations with parallels being taken from the more difficult UK system.

In the United States, regulation of hunting is primarily performed by state law; additional regulations are imposed through Federal environmental law regarding migratory birds (such as ducks and geese) and endangered species.

Like many licenses, a hunting license is considered a privilege granted by the government, rather than a constitutional right under the Second Amendment. As a general rule, unprotected pest species are ''not'' subject to a hunting license. Vermin may be hunted without a license, or may even be the subject of a bounty paid to the hunter. A Federal law, the Airborne Hunting Act (AHA), was passed in 1971 with the goal of eliminating aerial hunting, that is, shooting wildlife from planes or helicopters.

Each state has different standards and paperwork requirements for getting a hunting license. These include the areas, time periods, harvesting techniques, distinctions between species, and a hunting safety course. Licenses to hunt typically go on sale once a year. Some states, such as New York, allow only during a defined single season, or for a lifetime during such seasons for residents of the state, upon payment of the appropriate fees. As a general rule, hunting licenses are non-transferable, are a privilege (not a right), and does not allow trespass on private land. Hunting big game typically requires a tag for each animal harvested. Tags must be purchased in addition to the hunting license, and the number of tags issued to an individual is typically limited. In cases where there are more prospective hunters than the quota for that species, tags are usually assigned by lottery. Tags may be further restricted to a specific area or wildlife management unit. States with these "tags" include Alaska, California, Florida, Georgia, Illinois, Louisiana, New York, Ohio, Tennessee, Texas, and Virginia. 49 of the 50 states require a prospective big game hunter take a several-hour course about safety, often termed sportsman education or "hunter's safety course" in the case of California. Such jurisdictions also may limit getting a hunting license to adults or may grant a "junior" license for persons as young as twelve years of age. Several United States and Canadian provinces have joined in an Interstate Wildlife Violator Compact (IWVC) to control interstate hunting and to punish violators of differing laws.

Federal law requires the purchase of a duck stamp in order to shoot migratory ducks. They are regulated by the U.S. Fish and Wildlife Service. United States law also mandates strict limits on the hunting ("taking") of endangered species. The U.S. is a signatory to the Convention on International Trade in Endangered Species of Wild Fauna and Flora (CITES). The Bush Administration proposed lifting some restrictions in 2005 (for antelopes), as did the Norwegian Government (for wolves) in the same year.

Both Federal and state laws exempt the following: # Pest species, as noted above, such as rodents. There is a false urban legend that a hunting license is required to trap mice. # Native Americans based on Native American treaties; some states require residency on a Native American reservation. The Supreme Court of the United States held in ''Menominee Tribe v. United States'' that Congress must affirmatively take away Native Americans' hunting rights; otherwise, Native Americans are presumed to have such rights and do not required hunting licenses. # Specific statutes, such as the Marine Mammal Protection Act and eagle feather laws (see below). # Alaskan Natives. # Active service members of the military, who often get free licenses. # The blind. # Sport hunting for targets. # Youth are usually exempt from paying for a hunting or fishing license, but this varies by state from those under 12 years old to those under 16 years of age.

Challenges regarding the Second Amendment

Some hunters have challenged hunting licenses, as being in violation of the right to keep and bear arms as guaranteed by Second Amendment to the United States Constitution; the Supreme Court of the US in February 2008, heard arguments on the proper standard of review for gun laws or regulations. However, in ''District of Columbia v. Heller'', the Court declined to examine the broader issues, leaving state hunting licenses valid and in force. The current law is unclear as to what standard of review would apply, but the rational basis or arbitrary and capricious tests are the most likely standards. Under either standard, most hunting license regimes in the United States would likely pass muster, due to the need to conserve natural resources, to enforce the police power, and to raise revenue, all valid purposes of such laws.

Most major conservation organizations in the US favor the continued legality and regulation of hunting, including Ducks Unlimited, the National Wildlife Federation, and The Wilderness Society. The Defenders of Wildlife, National Audubon Society, and the World Wildlife Fund also support licenses for regulated hunting of wildlife. The Sierra Club supports hunting licenses, but there has been tension in the group for two decades between those who want to ally with hunters and to regulate them, and those opposed to hunting altogether. The American Humane Association and the People for the Ethical Treatment of Animals are opposed to hunting, and would ban the practice rather than regulating it.