Click Here for Items Related To - Human rights in Argentina


The history of human rights in Argentina is affected by the Dirty War and its aftermath. The Dirty War, a civic-military dictatorship comprising state-sponsored violence against Argentine citizenry from roughly 1976 to 1983, carried out primarily by
Jorge Rafael Videla 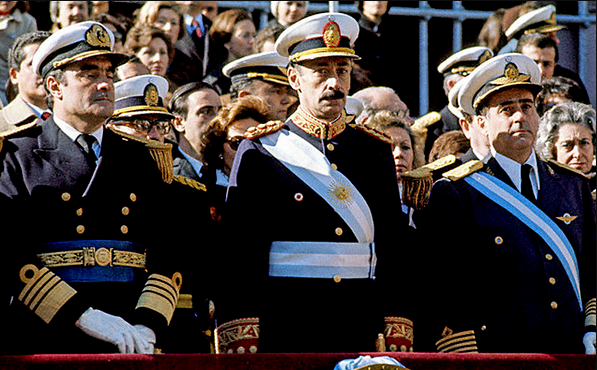 's military government. However, the human rights situation in Argentina has improved since.

According to the ''Nunca Más'' report issued by the National Commission on the Disappearance of Persons (CONADEP) in 1984, about 9,000 people had "disappeared" between 1976 and 1983. According to a secret cable from
DINA

(Chilean secret police) in Buenos Aires, an estimate by the Argentine 601st Intelligence Battalion in mid-July 1978, which started counting victims in 1975, gave the figure of 22,000 persons. This estimate was first published by John Dinges in 2004. Estimates by human rights organizations were up to 30,000. The Montoneros admitted losing 5,000 guerrillas killed, and the ERP admitted the loss of another 5,000 of their own guerrillas killed. By comparison, Argentine security forces cite 775 deaths of their own. In contrast, there were 13,500 victims of
left-wing terrorism Left-wing terrorism or far-left terrorism, sometimes called Marxist–Leninist terrorism or revolutionary left-wing terrorism, is terrorism Terrorism is, in the broadest sense, the use of intentional violence to achieve political aims. It i ...
in Argentina. There is no agreement on the actual number of ''detenidos-desaparecidos''. In an interview with Buenos Aires daily '' Clarin'' in 2009, Fernandez Meijide, who formed part of the 1984 truth commission, claimed that the ''documented'' number of Argentines killed or disappeared was closer to 9,000. The ''Asemblea por los Derechos Humanos'' ( APDH or Permanent Assembly for Human Rights) estimated the number of disappeared as 12,261, which included "definitive disappearances" and PEN detainee survivors of the clandestine detention centres spread throughout Argentina. The total figure of official prisoners was 8,625 and of these PEN detainees 157 were killed after being released from detention. Between 1969 and 1979 left-wing guerrillas accounted for 3,249 kidnappings and murders. CONADEP also recorded 458 assassinations (attributed to the Argentine Anticommunist Alliance) and about 600 forced disappearances during the period of democratic rule between 1973 and 1976. The laws of Ley de Obediencia Debida, ''Obediencia debida'' ("Due Obedience") and Ley de Punto Final, ''Punto Final'' ("Stop") known as the laws of impunity were annulled by the Supreme Court on June 14, 2005 using the concept of crimes against humanity, after on April 19, 2005 the Third Chamber of the Spanish National Court sentenced the naval officer, Adolfo Scilingo, for crimes against humanity, which was confirmed by the Spanish Supreme Court on October 1, 2007. The principle used by the sentence was ratified by the European Court of Human Rights in the case Petr Kislyiy against Estonia on January 17, 2006 and Inter-American Court of Human Rights ruling in the Case of Almonacid on September 26, 2006. The fact that these statements recognize the application of this concept of international law in ordinary courts is a milestone in the history of international human rights. This situation led to the opening of some trials in Córdoba, Argentina, Cordoba, Corrientes, San Miguel de Tucumán, Tucumán and Buenos Aires and there are several on the procedural schedule. Sentences confirmed the implementation of the concept of "crimes against humanity", but investigations were not adequate to international law, or have joined the investigation and prosecution procedures as consistent with the types of crimes arising from international criminal law. This affects, using ordinary criminal law standards, the type of testing needed and who may be charged. There procedural certainty is impossible to substantiate the thousands of lawsuits pending across the country and to keep the current procedure.

Respect for the integrity of the person

Arbitrary or unlawful deprivation of life

While the government or its agents did not commit any politically motivated killings, there are reports that police committed killings involving unwarranted or excessive force. Generally, officers accused of wrongdoing are administratively suspended until completion of an investigation. Authorities investigated and in some cases detained, prosecuted, and convicted the officers involved. The non-governmental organization (NGO) Coordinator Against Police Repression (CORREPI) reported that security forces using excessive force killed more than 200 persons each year. In January 2008 local victim advocacy organization Madres del Dolor lodged with court a case accusing two policemen of killing 21-year-old Sergio Enciso in Buenos Aires Province. The case remained pending till the end of 2008. According to Madres del Dolor, a judge detained five police officers and the police chief of Ramos Mejia in Buenos Aires Province for the February death of 35-year-old Gaston Duffau after an official autopsy confirmed that the victim died from multiple blows to the body and asphyxia. The police officials involved remained in pretrial detention at year's end. There are no known developments in the case of Carlos Madrid, an off duty Buenos Aires police sergeant, who was in pretrial detention for the November 2007 killing of Daniel Ezequiel Cespedes. In July 2008 a court sentenced police officer Dario Poblete to life imprisonment for the April 2007 killing of school teacher Carlos Fuentealba during a teachers' strike in Neuquen. In September a Jujuy provincial court sentenced one police officer to life imprisonment and another to four years in prison for the 2006 death of Saul Mendoza. The court acquitted a third officer and continued to investigate a fourth. There were no known developments in the trial of two former police officers and a civilian charged with homicide in the 2006 beating and shooting death of 15-year-old Miguel Eduardo Cardozo. Human rights groups stated to the press that ex-police officer Marta Jorgelina Oviedo was serving her life imprisonment sentence for the 2002 killing of Andrea Viera under house arrest. In August 2008 the government, as recommended by the Inter-American Court of Human Rights in 2003, reopened an investigation into the 1991 killing by police forces of Walter Bulacio. The trial remained pending at year's end.

In contrast with the systematic forced disappearance of persons under the military dictatorship, the situation has greatly improved and there were no reports of politically motivated disappearances in 2008. Judicial proceedings related to killings, disappearances, and torture committed by the 1976-83 military dictatorship continue to this day. According to a human rights organization, the (CELS), by the end of 2008, there were 255 ongoing judicial investigations and an estimated 508 persons indicted for crimes against humanity committed during the Dirty War era. Of those indicted, 358 remained in pretrial detention. At least 14 former state security agents and their civilian allies were convicted of human rights crimes, including forced disappearances and kidnappings. A November 2008 Noticias Argentinas press report, compiling information provided by the National Prosecutor General's Office, stated that 32 individuals had been convicted for crimes against humanity since 2003, 371 suspects remained in pretrial detention, and 61 persons remained fugitives from justice. In March 2008 a federal court decided that crimes committed by the Argentine Anti Communism Alliance before and during the military dictatorship were crimes against humanity and therefore not subject to the statute of limitations. The press, civil society, and legal scholars express concern that the government's efforts to pursue justice for human rights crimes committed during the military dictatorship does not include armed guerrilla groups that also were accused of committing abuses during the same time period. In January 2008 a court released the wife and two children of former naval official Hector Febres, who died of cyanide poisoning in prison while facing charges of torture. They still faced charges on suspicion that they helped Febres commit suicide. In March a federal court released two Coast Guard constables who were arrested in connection with the case. In March 2008 the National Human Rights Secretariat pressed homicide charges against former economy minister Jose Martinez de Hoz, who served under the military dictatorship, for the death of economist Juan Carlos Casariego Del Bel. In March 2008 former navy lieutenant commander Ricardo Cavallo was extradited from Spain to Argentina to face charges of crimes against humanity committed during the military dictatorship. Cavallo was indicted in July and remained in pretrial detention at year's end. In May 2008 federal authorities indicted Ernesto Barreiro for his role in committing human rights abuses during the military dictatorship, when he served as an army officer and chief interrogator at the La Perla clandestine torture center. He remained in pretrial detention at year's end. In April 2008 former police officers Fernando Esvedes and Carlos Vercellone were arrested for their alleged role in political kidnappings and torture in the clandestine detention center Pozo de Arana during the military dictatorship, and their trial remained pending at year's end. In July former army chief Luciano Benjamin Menendez and former army officials Oreste Valentin Padovan, Ricardo Alberto Ramon Lardone, Carlos Alberto Diaz, and Luis Alberto Manzanelli were sentenced to life imprisonment for human rights violations committed during the military dictatorship. Former army officials Hermes Oscar Rodriguez, Jorge Exequiel Acosta, and Carlos Alberto Vega received sentences ranging from 18 to 22 years' imprisonment. In August 2008 former army lieutenant colonel Julio Rafael Barreiro was sentenced to life imprisonment, while former captain Juan Carlos de Marchi and former colonel Horacio Losito were sentenced to 25 years' imprisonment for their role in human rights violations during the military dictatorship. Former gendarmerie commander Raul Alfredo Reynoso was sentenced to 18 years. In August 2008 a human rights trial against former brigadier general Enrique Braulio Olea, former colonels Oscar Lorenzo Reinhold and Mario Alberto Gomez Arenas, former major Luis Alberto Farias Barrera, former military officers Jorge Eduardo Molina Ezcurra and Sergio Adolfo San Martin, and doctor Hilarion de la Paz Sosa began in Neuquen Province. The former military officials were accused of 17 counts of crimes against humanity committed during the military dictatorship. In September 2008 a federal judge resumed an investigation into the 1973 killing of General Labor Confederation leader Jose Ignacio Rucci, in which the armed guerrilla group, the Montoneros, was believed to have been involved. In October 2008 federal authorities indicted former National University Concentration chief Eduardo Cincotta, former member Nicolas Cafarello, three former air force officials, and former army colonel Roberto Atilio Bocalandro for human rights crimes committed in the clandestine detention center La Cueva in Mar del Plata. They remained in pretrial detention at year's end. In October 2008 former army officials Alberto Barda, Hipolito Mariani, and Cesar Comes received sentences ranging from 25 years' to life imprisonment for human rights violations committed in the clandestine detention centers of Mansion Sere and La Cueva. In December the Court of Criminal Appeals ordered that 21 military officials accused of human rights violations during the military dictatorship be freed on bail, including two of the most notorious suspects, ex-naval captains Alfredo Astiz and Jorge Acosta. The three-judge panel noted that the men had spent more than five years in detention without a trial, far in excess of the two-year legal limit for pretrial detention. The prosecutors, CELS, and the Grandmothers of the Plaza de Mayo subsequently appealed the decision, and the officers remained in detention pending a Supreme Court decision. The government sought to impeach the judges who ordered the release. There were no developments in the 2006 missing persons case of Jorge Julio Lopez, a key witness in the case against Miguel Etchecolatz, former commissioner general of the Buenos Aires Province police. Judicial authorities continued to investigate cases of kidnapping and illegal adoption by members of the former military dictatorship of children born to detained dissidents. At year's end, 96 of an estimated 500 persons born to detained and disappeared dissidents and illegally adopted had been identified and made aware of their true backgrounds. In April 2008 a court sentenced a military official to 10 years in prison for his role in facilitating the illegal adoption of Maria Eugenia Sampallo Barragan, the daughter of political dissidents killed during the military dictatorship. This was the first case of its kind, and Sampallo's adoptive parents were sentenced to seven and eight years' imprisonment.