Honduran cuisine is a fusion of Mesoamerican (Lenca), Spanish, Caribbean and African cuisines. There are also dishes from the Garifuna people. Coconut and coconut milk are featured in both sweet and savory dishes. Regional specialties include fried fish, tamales, carne asada and baleadas. Other popular dishes include meat roasted with chismol and carne asada, chicken with rice and corn, and fried fish with pickled onions and jalapeños. In the coastal areas and the Bay Islands, seafood and some meats are prepared in many ways, including with coconut milk. Among the soups the Hondurans enjoy are bean soup, mondongo soup (tripe soup), seafood soups and beef soups. Generally all of these soups are mixed with plantains, yuca, and cabbage, and served with corn tortillas. Other typical dishes are the montucas or corn tamales, stuffed tortillas, and tamales wrapped in plantain leaves. Typical Honduran dishes also include an abundant selection of tropical fruits such as papaya, pineapple, plum, sapote, passion fruit, and bananas which are prepared in many ways while they are still green. Common beverages for dinner or lunch include soft drinks. One agua fresca that is very popular in Honduras is agua de ensalada. This freshly made drink consists of chopped fruit such as apples and various seasonal fruit. Another popular drink is agua de nance. Among the most tasteful of bottled drinks is called Tropical, which is a banana-flavored soft drink.

Hondurans usually have a large, hearty breakfast. It typically consists of fried eggs (whole or scrambled), refried beans, Honduran salty sour cream (''crema''), ''queso fresco'', avocado, sweet fried plantains, and tortillas. It is common for most households to first prepare tortillas, a staple for nearly every dish, which are used throughout the rest of the day. Other breakfast favorites include carne asada (roasted meat) and Honduran spicy sausages (''chorizo''). A good breakfast will be accompanied with hot, dark—in this case Honduran-grown—coffee. Honduran coffee is renowned for its delicate qualities, being grown on the slopes of the Honduran mountains in rich soils of volcanic origin. A specific brand famous for its flavor comes from the Honduran region of Marcala; others are the Copán coffee and the coffee grown in Ocotepeque. Street vendors often sell breakfast baleadas made of flour tortillas, refried beans, and ''crema'' or ''queso fresco''. Additional toppings include eggs, meat, and even pickled onions. Vendors sell small tamales made of sweet yellow corn dough, called ''tamalitos de elote'', eaten with sour cream; fresh horchata and pozole is also common. Another food that can be eaten for breakfast as a dessert is rosquillas. Rosquillas can be considered as a Honduran doughnut and are made from corn (masa, cheese and yeast).

''Sopa de caracol'' (conch soup) is one of the most representative dishes of the Honduran cuisine. This soup was made famous throughout Latin America because of a catchy song from Banda Blanca called "Sopa de Caracol." The conch is cooked in coconut milk and the conch's broth, with spices, yuca (cassava), cilantro, and green bananas known as ''guineo verde''. Other varieties including crab, fish or shrimp are known as ''sopa marinera''.

This traditional soup is made by boiling black or red beans with garlic in water until soft. Once they are soft, the beans are blended, and added to a pot filled with water and with pork bones to serve as the base of the soup. Once the soup base has taken a chocolate color and has boiled enough, the bones are removed, and water is added to the pot, along with the rest of the ingredients, which may include yuca, green plantains, eggs, and many other ingredients. The soup is served with rice and tortillas, and may be accompanied with sour cream, smoked dry cheese, avocados and lemons.

Carneada is considered one of Honduras' national dishes, known as ''plato típico'' when served in Honduran restaurants. While it is a type of dish, a ''carneada'' or ''carne asada'', like its Mexican counterpart, is usually more of a social event with drinks and music centered on a feast of barbecued meat. The cuts of beef are usually marinated in sour orange juice, salt, pepper and spices, and then grilled. The meat is usually accompanied by ''chimol'' salsa (made of chopped tomatoes, onion and cilantro with lemon and spices), roasted plátanos (sweet plantains), spicy chorizos, olanchano cheese, tortillas, and refried mashed beans. 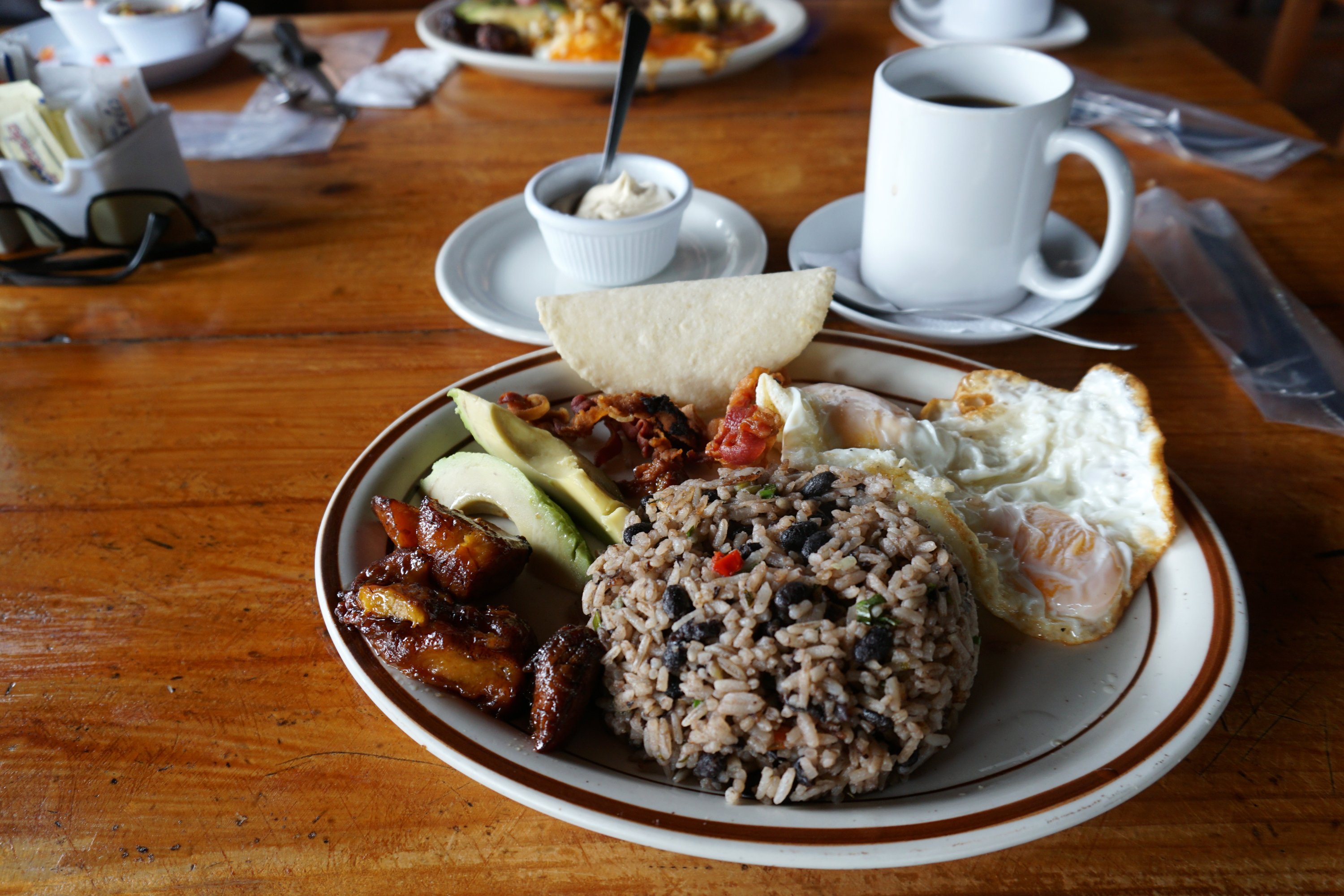 Rice and beans is a popular side dish in the Honduran Caribbean coast. It is often called Casamiento (Similar to El Salvador). Every country has their own signature bean and in Honduras they are red beans ( frijoles cheles). Typically in Honduras the beans are refried and served with green fried bananas (tajadas).

Fried Yojoa fish is a famous Honduran dish that is served all over the country. The fish often has a more savory flavor compared to other types of fish served in the region. Yojoa fish is salted, spiced, and later deep fried. It is then oftentimes served with pickled red cabbage, pickled onions and deep fried sliced plantains called tajaditas.

The baleada is one of the most common street foods in El Salvador & Honduras. The basic style is made of a flour tortilla which is folded and filled with refried beans, and your choice of ''queso fresco'' or sour cream (''crema''). Many people add roasted meat, avocado, plantains or scrambled eggs as well. There are Honduran fast-food chains that serve different kinds of Baleadas.

Corn, or ''maíz'', is a staple in Honduran cuisine. Eating corn comes to Hondurans as an inheritance of their Maya-Lenca ancestors; the Maya believed corn to be sacred, and that the father gods created men from it. Some tortilla based dishes include: ''Tacos Fritos'': Tortillas are filled in with ground meat or chicken and rolled into a flute. The rolled tacos are then deep fried and served with raw cabbage, hot tomato sauce, cheese and sour cream as toppings. ''Catrachitas'': A common simple snack, made of deep fried tortilla chips covered with mashed refried beans, cheese and hot sauce. A variant of this snack are de ''Chilindrinas'', deep fried tortilla strips with hot tomato sauce and cheese. It is common in Honduran restaurants to serve an ''Anafre'', a clay pot with melting cheese or sour cream, mashed beans and sometimes chopped chorizo (Honduran sausage) heated on top of a clay container with burning charcoal, and tortilla fried chips to dip in. Similar to Swiss fondue. ''Enchiladas'': The whole Tortilla is deep fried and served with a variety of toppings. First ground pork meat is placed, next raw chopped cabbage or lettuce, then hot tomato sauce, and a slice of boiled egg. ''Chilaquiles'': Tortillas are covered in egg and deep fried. Afterwards placed in a wide container to form a layer of tortilla as a base. Cheese, cooked chicken and hot tomato sauce with spices is then added. Again place another layer of tortillas and continue to do so to make something like a Tortilla Lasagna. Place in the oven and let cook until cheese melts and the tortillas are soft. Served with thick sour cream. ''Tortilla con Quesillo'': Two tortillas with quesillo, a melted cheese, in between and then pan fried; served with a tomato sauce. Mashed beans are sometimes also added as a filling with the cheese.