In vertebrate anatomy, hip (or "coxa" in medical terminology) refers to either an anatomical region or a joint. The hip region is located lateral and anterior to the gluteal region, inferior to the iliac crest, and overlying the greater trochanter of the femur, or "thigh bone". In adults, three of the bones of the pelvis have fused into the hip bone or acetabulum which forms part of the hip region. The hip joint, scientifically referred to as the acetabulofemoral joint (''art. coxae''), is the joint between the femur and acetabulum of the pelvis and its primary function is to support the weight of the body in both static (e.g., standing) and dynamic (e.g., walking or running) postures. The hip joints have very important roles in retaining balance, and for maintaining the pelvic inclination angle. Pain of the hip may be the result of numerous causes, including nervous, osteoarthritic, infectious, traumatic, and genetic.

The proximal femur is largely covered by muscles and, as a consequence, the greater trochanter is often the only palpable bony structure in the hip region. 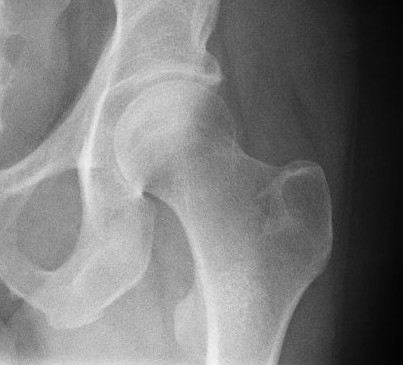 The hip joint is a synovial joint formed by the articulation of the rounded head of the femur and the cup-like acetabulum of the pelvis. It forms the primary connection between the bones of the lower limb and the axial skeleton of the trunk and pelvis. Both joint surfaces are covered with a strong but lubricated layer called articular hyaline cartilage. The cuplike acetabulum forms at the union of three pelvic bones — the ilium, pubis, and ischium. The Y-shaped growth plate that separates them, the triradiate cartilage, is fused definitively at ages 14–16. It is a special type of spheroidal or ball and socket joint where the roughly spherical femoral head is largely contained within the acetabulum and has an average radius of curvature of 2.5 cm. The acetabulum grasps almost half the femoral ball, a grip augmented by a ring-shaped fibrocartilaginous lip, the acetabular labrum, which extends the joint beyond the equator. The joint space between the femoral head and the superior acetabulum is normally between 2 and 7 mm. The head of the femur is attached to the shaft by a thin neck region that is often prone to fracture in the elderly, which is mainly due to the degenerative effects of osteoporosis. The acetabulum is oriented inferiorly, laterally and anteriorly, while the femoral neck is directed superiorly, medially, and slightly anteriorly.

* The ''transverse angle of the acetabular inlet'' (also called ''Sharp's angle'' and is generally the angle referred to by ''acetabular angle'' without further specification) can be determined by measuring the angle between a line passing from the superior to the inferior acetabular rim and the horizontal plane; an angle which normally measures 51° at birth and 40° in adults, and which affects the acetabular lateral coverage of the femoral head and several other parameters. * The ''sagittal angle of the acetabular inlet'' is an angle between a line passing from the anterior to the posterior acetabular rim and the sagittal plane. It measures 7° at birth and increases to 17° in adults.

A hip fracture is a break that occurs in the upper part of the femur. Symptoms may include pain around the hip particularly with movement and shortening of the leg.