Click Here for Items Related To - Hill of Tara


The Hill of Tara ( ga|Teamhair or ) is a hill and ancient ceremonial and burial site near Skryne in County Meath, Ireland. According to tradition, it was the inauguration place and seat of the High Kings of Ireland, and it also appears in Irish mythology. Tara consists of numerous monuments and earthworks—from the Neolithic to the Iron Age—including a passage tomb (the "Mound of the Hostages"), burial mounds, round enclosures, a standing stone (believed to be the ''Lia Fáil'' or "Stone of Destiny"), and a ceremonial avenue. There is also a church and graveyard on the hill. Tara is part of a larger ancient landscape and Tara itself is a protected national monument under the care of The Office of Public Works, an agency of the Irish Government.

The name ''Tara'' is an anglicization of the Irish name or ('hill of Tara'). It is also known as ('Tara of the kings'), and formerly also ('the grey ridge'). The Old Irish form is . It is believed this comes from Proto-Celtic and means a 'sanctuary' or 'sacred space' cut off for ceremony, cognate with the Greek () and Latin . Another suggestion is that it means "a height with a view". 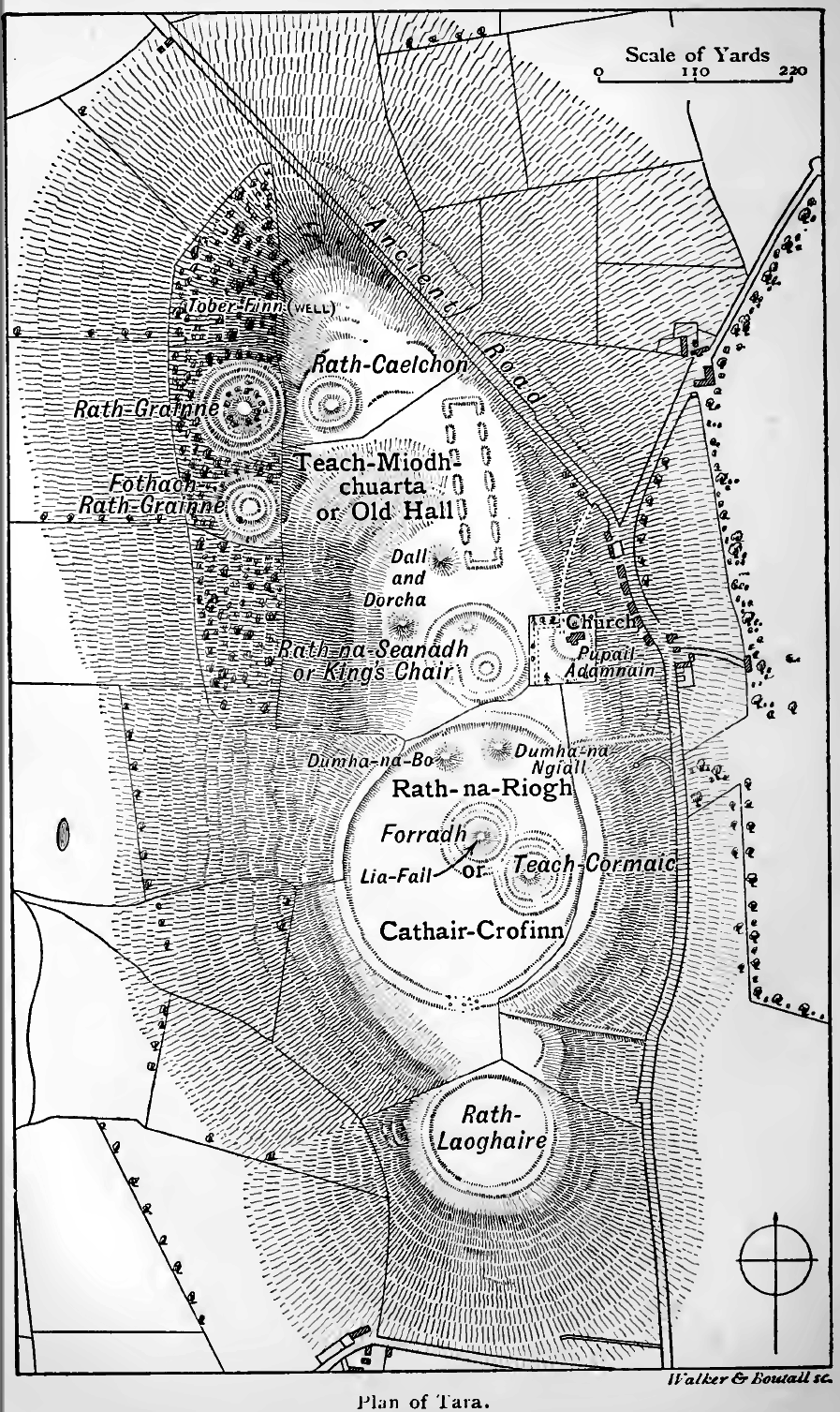 The remains of twenty ancient monuments are visible, and at least three times that many have been found through geophysical surveys and aerial photography. The oldest visible monument is (the 'Mound of the Hostages'), a Neolithic passage tomb built around 3,200 BC. It holds the remains of hundreds of people, most of which are cremated bones. In the Neolithic, it was the communal tomb of a single community for about a century, during which there were almost 300 burials. Almost a millennium later, in the Bronze Age, there were a further 33 burials – first in the passage and then in the mound around it. During this time, only certain high-status individuals were buried there. At first, it was the tomb of one community, but later multiple communities came together to bury their elite there. The last burial was a full body burial of a young man of high status, with an ornate necklace and dagger. During the late Neolithic or early Bronze Age, a huge double timber circle or "wood henge" was built on the hilltop. It was 250m in diameter and surrounded the Mound of the Hostages. At least six smaller burial mounds were built in an arc around this timber circle, including those known as , , ('Mound of the Mercenary Women') and ('Mound of the Cow'). The timber circle was eventually either removed or decayed, and the burial mounds are barely visible today. There are several large round enclosures on the hill, which were built in the Iron Age. The biggest and most central of these is ''Ráth na Ríogh'' (the Enclosure of the Kings), which measures in circumference, north-south by east-west, with an inner ditch and outer bank. It is dated to the 1st century BC and was originally marked out by a stakewall. Human burials, and a high concentration of horse and dog bones, were found in the ditch. Within the is the Mound of the Hostages and two round, double-ditched enclosures which together make a figure-of-eight shape. One is ('Cormac's House') and the other is the or Royal Seat, which incorporates earlier burial mounds. On top of the is a standing stone, which is believed to be the ('Stone of Destiny') at which the High Kings were crowned. According to legend, the stone would let out a roar when the rightful king touched it. It is believed that the stone originally lay beside or on top of the Mound of the Hostages. Just to the north of , is (the 'Rath of the Synods'), which was built in the middle of the former "wood henge". It is a round enclosure with four rings of ditches and banks, and incorporates earlier burial mounds. It was re-modelled several times and once had a large timber building inside it, resembling the one at Navan. It was occupied between the 1st and 4th centuries AD, and Roman artefacts were also found there. It was badly mutilated in the early 20th century by British Israelites searching for the Ark of the Covenant. The other round enclosures are ('Laoghaire's Fort', where the eponymous king is said to have been buried) at the southern edge of the hill, and the ('Sloping Trenches' or 'Sloping Graves') at the northwestern edge, which includes and . The are burial mounds with ring ditches around them which sit on a slope. At the northern end of the hill is or 'Banqueting Hall'. This was likely the ceremonial avenue leading to the hilltop and seems to have been one of the last monuments built. Half a mile south of the Hill of Tara is another large round enclosure known as Rath Meave, which refers to the legendary figure Medb or Medb Lethderg.

A church, called Saint Patrick's, is on the eastern side of the hilltop. The "Rath of the Synods" has been partly destroyed by its churchyard. The modern church was built in 1822–23 on the site of an earlier one. The earliest evidence of a church at Tara is a charter dating from the 1190s. In 1212, this church was "among the possessions confirmed to the Knights Hospitallers of Saint John of Kilmainham by Pope Innocent III".