ironclad river gunboats assault the Confederates at Fort Donelson on February 1862, during the American Civil War.]] A gunboat is a naval watercraft designed for the express purpose of carrying one or more guns to bombard coastal targets, as opposed to those military craft designed for naval warfare, or for ferrying troops or supplies.

In the age of sail, a gunboat was usually a small undecked vessel carrying a single smoothbore cannon in the bow, or just two or three such cannons. A gunboat could carry one or two masts or be oar-powered only, but the single-masted version of about length was most typical. Some types of gunboat carried two cannons, or else mounted a number of swivel guns on the railings. The small gunboat had advantages: if it only carried a single cannon, the boat could manoeuvre in shallow or restricted areas – such as rivers or lakes – where larger ships could sail only with difficulty. The gun that such boats carried could be quite heavy; a 32-pounder for instance. As such boats were cheap and quick to build, naval forces favoured swarm tactics: while a single hit from a frigate's broadside would destroy a gunboat, a frigate facing a large squadron of gunboats could suffer serious damage before it could manage to sink them all. For example: in the Battle of Alvøen (1808) during the Gunboat War of 1807–1814, five Dano-Norwegian gunboats defeated the lone frigate . Gunboats used in the Battle of Valcour Island (1776) on Lake Champlain during the American Revolutionary War were mostly built on the spot, attesting to the speed of their construction.

All navies of the sailing era kept a number of gunboats on hand. Gunboats saw extensive use in the Baltic Sea during the late 18th century as they were well-suited for the extensive coastal skerries and archipelagoes of Sweden, Finland and Russia. The rivalry between Sweden and Russia in particular led to an intense expansion of gunboat fleets and the development of new gunboat types. The two countries clashed during the Russo-Swedish war of 1788–90, a conflict that culminated in the massive Battle of Svensksund in 1790, in which over 30,000 men and hundreds of gunboats, galleys and other oared craft took part. The majority of these were vessels developed from the 1770s and onwards by the naval architect Fredrik Henrik af Chapman for the Swedish archipelago fleet. The designs, copied and refined by the rival Danish and Russian navies, spread to the Mediterranean and to the Black Sea. Two variants occurred most commonly: * a larger "gun sloop" (from the Swedish ''kanonslup'') with two 24-pounders, one in the stern and one in the bow * a smaller "gun yawl" (''kanonjolle'') with a single 24-pounder Many of the Baltic navies kept gunboats in service well into the second half of the 19th century. British ships engaged larger Russian gunboats off Turku in southeast Finland in 1854 during the Crimean War. The Russian vessels had the distinction of being the last oared vessels of war in history to fire their guns in anger. Gunboats played a key role in Napoleon Bonaparte's plan for the invasion of England in 1804. Denmark-Norway used them heavily in the Gunboat War. Between 1803 and 1812 the United States Navy had a policy of basing its navy on coastal gunboats, experimenting with a variety of designs. President Thomas Jefferson (in office: 1801–1809) and his Democratic-Republican Party opposed a strong navy, regarding gunboats as adequate to defend the United States' major harbors. They proved useless against the British blockade during the War of 1812. 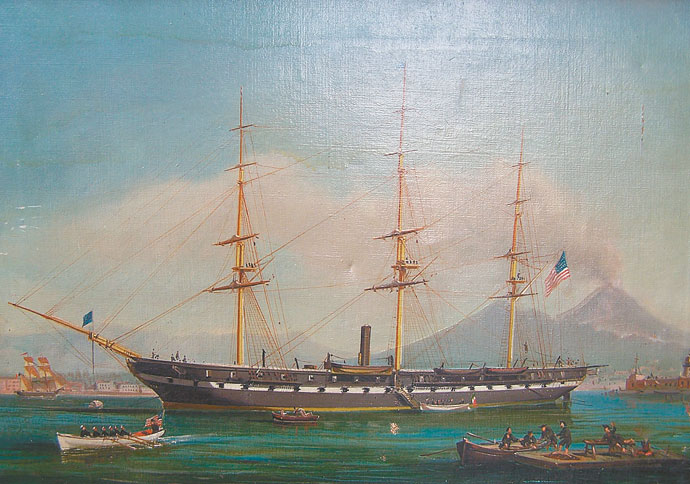 With the introduction of steam power in the early 19th century, the Royal Navy and other navies built considerable numbers of small vessels propelled by side paddles and later by screws. Initially, these vessels retained full sailing rigs and used steam engines for auxiliary propulsion. The British Royal Navy deployed two wooden paddle-gunboats in the Lower Great Lakes and St. Lawrence River during the Rebellions of 1837 in Upper and Lower Canada. The United States Navy deployed an iron-hulled paddle gunboat, , to the Great Lakes in 1844. became the first propeller-driven gunboat in the world. Conradi shipyards in Kiel built the steam-powered gunboat in 1849 for the small navy of Schleswig-Holstein. Initially called ''"Gunboat No. 1"'', ''Von der Tann'' was the most modern ship in the navy. She participated successfully in the First Schleswig War of 1848–1851. Britain built a large number of wooden screw-gunboats during the 1850s, some of which participated in the Crimean War (1853–1856), Second Opium War (1856–1860) and Indian Mutiny (1857–1859). The requirement for gunboats in the Crimean War was formulated in 1854 to allow the Royal Navy to bombard shore facilities in the Baltic.