Griffith Park is a large municipal park at the eastern end of the Santa Monica Mountains, in the Los Feliz neighborhood of Los Angeles, California. The park covers of land, making it one of the largest urban parks in North America. It is the second-largest city park in California, after Mission Trails Preserve in San Diego, and the 11th-largest municipally-owned park in the United States. The park features a number of popular attractions such as the Los Angeles Zoo, the Autry Museum of the American West, the Griffith Observatory, and the Hollywood Sign. Due to its presence in many films, the park is among the most famous municipal parks in North America. It has been compared to Central Park in New York City and Golden Gate Park in San Francisco, two other notable American municipal parks, but it is much larger, more untamed, and rugged than either park.

After successfully investing in mining, Griffith J. Griffith purchased Rancho Los Feliz (near the Los Angeles River) in 1882 and started an ostrich farm there. Although ostrich feathers were commonly used in making women's hats in the late 19th century, Griffith's purpose was primarily to lure residents of Los Angeles to his nearby property developments, which supposedly were haunted by the ghost of Antonio Feliz (a previous owner of the property). After the property rush peaked, Griffith donated to the city of Los Angeles on December 16, 1896. Griffith was tried and convicted of shooting and severely wounding his wife in a 1903 incident. When released from prison, he attempted to fund the construction of an amphitheater, observatory, planetarium, and a girls' camp and boys' camp in the park. As his reputation in the city was tainted by his crime, the city refused his money.

In 1912, Griffith designated of the park, at its northeast corner along the Los Angeles River, be used to "do something to further aviation". The Griffith Park Aerodrome was the result. Aviation pioneers such as Glenn L. Martin and Silas Christoffersen used it, and the aerodrome passed to the National Guard Air Service. Air operations continued on a -long runway until 1939, when it was closed, partly due to danger from interference with the approaches to Grand Central Airport across the river in Glendale, and because the City Planning commission complained that a military airport violated the terms of Griffith's deed. The National Guard squadron moved to Van Nuys, and the Aerodrome was demolished, though the rotating beacon and its tower remained for many years. From 1946 until the mid-1950s, Rodger Young Village occupied the area which had formerly been the Aerodrome. Today that site is occupied by the Los Angeles Zoo parking lot, the Gene Autry Western Heritage Museum, soccer fields, and the interchange between the Golden State Freeway and the Ventura Freeway. 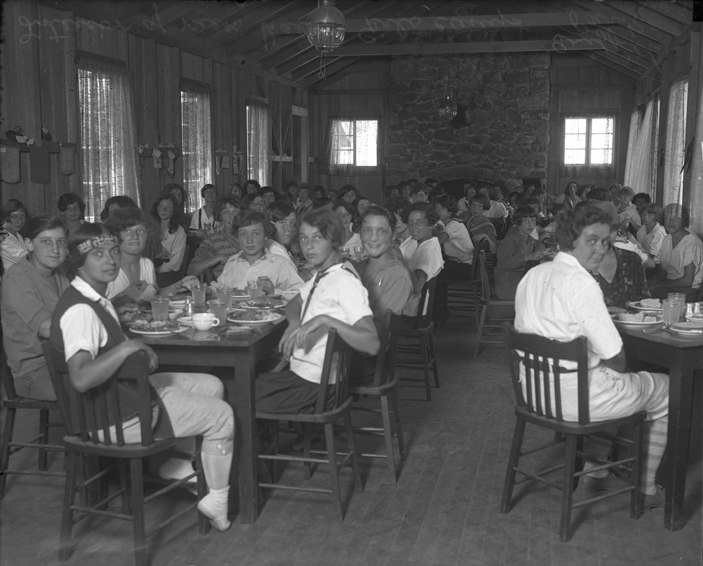 Griffith set up a trust fund for the improvements he envisioned, and after his death in 1919 the city began to build what Griffith had wanted. The amphitheater, called the Greek Theatre, was completed in 1930, and Griffith Observatory was finished in 1935. Subsequent to Griffith's original gift further donations of land, city purchases, and the reversion of land from private to public have expanded the Park to its present size. In December, 1944 the Sherman Company donated 444 acres of Hollywoodland open space to Griffith Park. This large, passive, eco-sensitive property borders the Lake Hollywood reservoir (west), the former Hollywoodland sign (north), and Bronson Canyon (east) where it connects into the original Griffith donation. The Hollywoodland residential community is surrounded by this land.

After the bombing of Pearl Harbor, the Civilian Conservation Corps camp contained within Griffith Park was converted to a holding center for Japanese Americans arrested as "enemy aliens" before they were transferred to more permanent internment camps. The Griffith Park Detention Camp opened almost immediately after the Pearl Harbor attack, taking in 35 Japanese immigrants suspected of fifth column activity because they lived and worked near military installations. These men, mostly fishermen from nearby Terminal Island, were transferred to an Immigration and Naturalization Service detention station after a brief stay, but Issei internees arrested in the days and weeks following the outbreak of the war arrived soon after to take their place. Up to 550 Japanese Americans were confined in Griffith Park from 1941 to 1942, all subsequently transferred to Fort Lincoln, Fort Missoula and other DOJ camps. On July 14, 1942, the detention camp became a POW Processing Center for German, Italian and Japanese prisoners-of-war, operating until August 3, 1943, when the prisoners were transferred elsewhere. The camp was changed to the Army Western Corps Photographic Center and Camouflage Experimental Laboratory until the end of the war.