A greenhouse gas (sometimes abbreviated GHG) is a gas that absorbs and emits radiant energy within the thermal infrared range, causing the greenhouse effect. The primary greenhouse gases in Earth's atmosphere are water vapor (), carbon dioxide (), methane (), nitrous oxide (), and ozone (). Without greenhouse gases, the average temperature of Earth's surface would be about , rather than the present average of . The atmospheres of Venus, Mars and Titan also contain greenhouse gases. Human activities since the beginning of the Industrial Revolution (around 1750) have produced a 45% increase in the atmospheric concentration of carbon dioxide, from 280 ppm in 1750 to 415 ppm in 2019. The last time the atmospheric concentration of carbon dioxide was this high was over 3 million years ago. This increase has occurred despite the uptake of more than half of the emissions by various natural "sinks" involved in the carbon cycle. At current greenhouse gas emission rates, temperatures could increase by 2 °C (3.6 °F), which the United Nations' Intergovernmental Panel on Climate Change (IPCC) designated as the upper limit to avoid "dangerous" levels, by 2036. The vast majority of anthropogenic carbon dioxide emissions come from combustion of fossil fuels, principally coal, petroleum (including oil) and natural gas, with additional contributions coming from deforestation and other changes in land use.

The major constituents of Earth's atmosphere, nitrogen ()(78%), oxygen ()(21%), and argon (Ar)(0.9%), are not greenhouse gases because molecules containing two atoms of the same element such as and have no net change in the distribution of their electrical charges when they vibrate, and monatomic gases such as Ar do not have vibrational modes. Hence they are almost totally unaffected by infrared radiation. Some molecules containing just two atoms of different elements, such as carbon monoxide (CO) and hydrogen chloride (HCl), do absorb infrared radiation, but these molecules are short-lived in the atmosphere owing to their reactivity or solubility. Therefore, they do not contribute significantly to the greenhouse effect and often are omitted when discussing greenhouse gases. 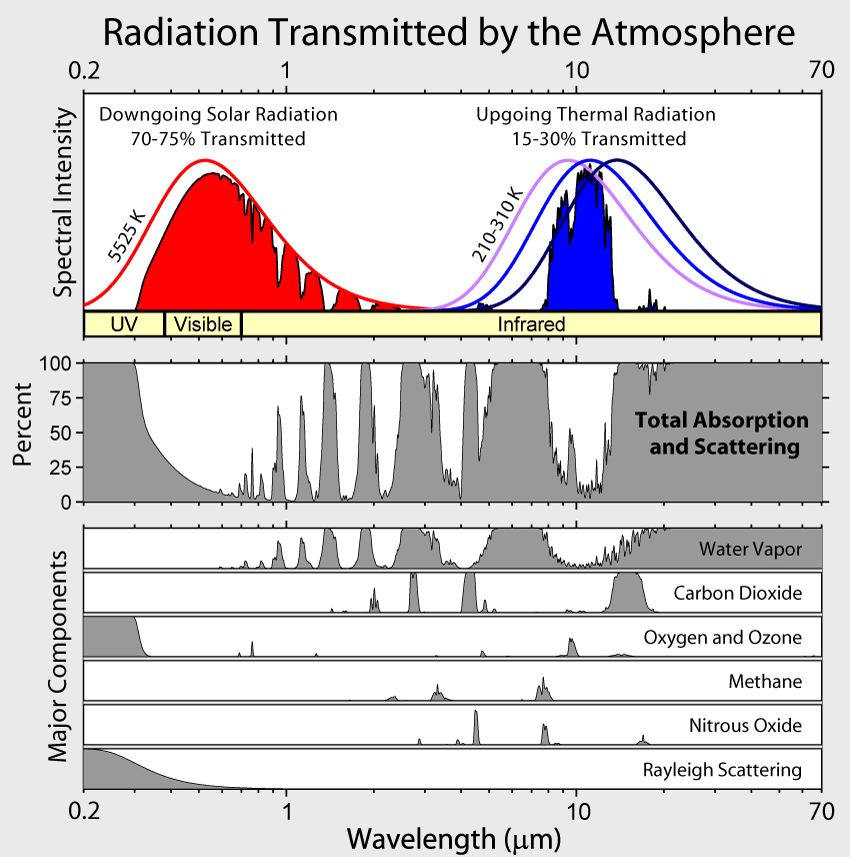 Greenhouse gases are those that absorb and emit infrared radiation in the wavelength range emitted by Earth. Carbon dioxide (0.04%), nitrous oxide, methane, and ozone are trace gases that account for almost 0.1% of Earth's atmosphere and have an appreciable greenhouse effect. In order, the most abundant greenhouse gases in Earth's atmosphere are: * Water vapor () * Carbon dioxide () * Methane () * Nitrous oxide () * Ozone () * Chlorofluorocarbons (CFCs) * Hydrofluorocarbons (includes HCFCs and HFCs) Atmospheric concentrations are determined by the balance between sources (emissions of the gas from human activities and natural systems) and sinks (the removal of the gas from the atmosphere by conversion to a different chemical compound or absorption by bodies of water). The proportion of an emission remaining in the atmosphere after a specified time is the "airborne fraction" (AF). The ''annual airborne fraction'' is the ratio of the atmospheric increase in a given year to that year's total emissions. As of 2006 the annual airborne fraction for was about 0.45. The annual airborne fraction increased at a rate of 0.25 ± 0.21% per year over the period 1959–2006. 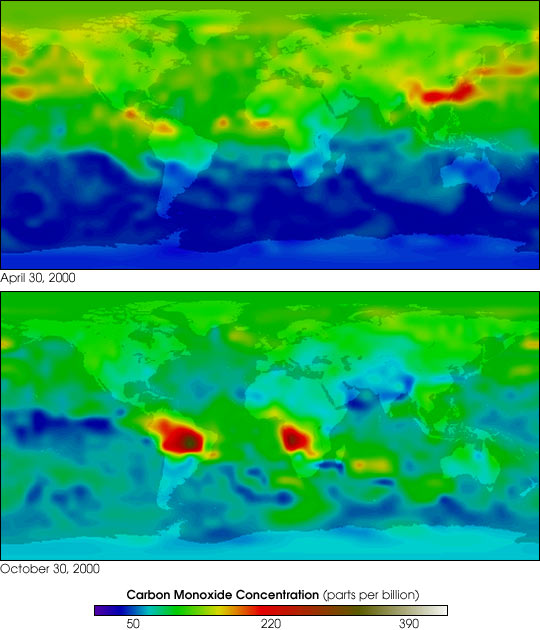 Some gases have indirect radiative effects (whether or not they are greenhouse gases themselves). This happens in two main ways. One way is that when they break down in the atmosphere they produce another greenhouse gas. For example, methane and carbon monoxide (CO) are oxidized to give carbon dioxide (and methane oxidation also produces water vapor). Oxidation of CO to directly produces an unambiguous increase in radiative forcing although the reason is subtle. The peak of the thermal IR emission from Earth's surface is very close to a strong vibrational absorption band of (wavelength 15 microns, or wavenumber 667 cm−1). On the other hand, the single CO vibrational band only absorbs IR at much shorter wavelengths (4.7 microns, or 2145 cm−1), where the emission of radiant energy from Earth's surface is at least a factor of ten lower. Oxidation of methane to , which requires reactions with the OH radical, produces an instantaneous reduction in radiative absorption and emission since is a weaker greenhouse gas than methane. However, the oxidations of CO and are entwined since both consume OH radicals. In any case, the calculation of the total radiative effect includes both direct and indirect forcing. A second type of indirect effect happens when chemical reactions in the atmosphere involving these gases change the concentrations of greenhouse gases. For example, the destruction of non-methane volatile organic compounds (NMVOCs) in the atmosphere can produce ozone. The size of the indirect effect can depend strongly on where and when the gas is emitted. Methane has indirect effects in addition to forming . The main chemical that reacts with methane in the atmosphere is the hydroxyl radical (OH), thus more methane means that the concentration of OH goes down. Effectively, methane increases its own atmospheric lifetime and therefore its overall radiative effect. The oxidation of methane can produce both ozone and water; and is a major source of water vapor in the normally dry stratosphere. CO and NMVOCs produce when they are oxidized. They remove OH from the atmosphere, and this leads to higher concentrations of methane. The surprising effect of this is that the global warming potential of CO is three times that of . The same process that converts NMVOCs to carbon dioxide can also lead to the formation of tropospheric ozone. Halocarbons have an indirect effect because they destroy stratospheric ozone. Finally, hydrogen can lead to ozone production and increases as well as producing stratospheric water vapor.

The major non-gas contributor to Earth's greenhouse effect, clouds, also absorb and emit infrared radiation and thus have an effect on greenhouse gas radiative properties. Clouds are water droplets or ice crystals suspended in the atmosphere.

Impacts on the overall greenhouse effect

The contribution of each gas to the greenhouse effect is determined by the characteristics of that gas, its abundance, and any indirect effects it may cause. For example, the direct radiative effect of a mass of methane is about 84 times stronger than the same mass of carbon dioxide over a 20-year time frame