Click Here for Items Related To - French conquest of Algeria


The French conquest of Algeria took place between 1830 and 1903. In 1827, an argument between Hussein Dey, the ruler of the Deylik of Algiers, and the French consul escalated into a naval blockade, following which France invaded and quickly seized Algiers in 1830, and seized other coastal communities. Amid internal political strife in France, decisions were repeatedly taken to retain control of the territory, and additional military forces were brought in over the following years to quell resistance in the interior of the country. Algerian resistance forces were divided between forces under Ahmed Bey ben Mohamed Chérif at Constantine, primarily in the east, and nationalist forces in Kabylie and the west. Treaties with the nationalists under `Abd al-Qādir enabled the French to first focus on the elimination of the remnants of the Deylik, achieved with the 1837 capture of Constantine. Abd Al-Qādir continued to give stiff resistance in the west. Finally driven into Morocco in 1842, by large-scale and heavy-handed French military action, he continued to wage a guerrilla war until the Moroccan government, under French diplomatic pressure following its defeat in the First Franco-Moroccan War, drove him out of Morocco. He surrendered to French forces in 1847.

The coastal and mountainous parts of Algeria were controlled by the Deylik of Algiers. The Deylik, while nominally part of the Ottoman Empire, acted independently from the Ottoman Sultan. The dey ruled the entire Deylik of Algiers, but only exercised direct control in and around Algiers, with Beyliks (Governorates) established in the Western, Central, and Eastern parts of the country. The remainder of the territory (including much of the interior), while nominally controlled by Algiers, was effectively under the control of local Berber and Arab leaders, who usually acted as vassals to Dey, albeit not always. In the Northern Saharan parts some oasis kingdoms such as the Sultanate of Tuggurt were controlled by the Deylik. The inner Saharan parts were only claimed by the Dey, while in reality they were completely controlled by tribal confederacies, and smaller kingdoms such as that of Kel Ahaggar. The Dey was supported, or in some cases controlled by the Janissaries of the Odjak of Algiers, although their power was heavily limited after 1817. The territory was bordered to the west by the Sultanate of Morocco and to the east by the Beylik of Tunis. The western border, the River, was particularly porous since there were shared tribal connections that crossed it. The Regency of Algiers was one of the main bases of the Barbary pirates and Barbary Slave Traders who attacked Christian ships and coastal settlements in the Mediterranean and North Atlantic. Like the rest of the Barbary Coast, the Regency of Algiers lived from the trade of slaves or goods captured from Europe, America and sub-Saharan Africa. The European powers bombarded Algiers on different occasions in retaliation and the United States provoked the Barbary Wars in order to put an end to Algerian privateering against Christian shipping. The conquest of Algeria began in the last days of the Bourbon Restoration by Charles X of France. It aimed to put a definite end to Barbary privateering and increase the king's popularity among the French people, particularly in Paris, where many veterans of the Napoleonic Wars lived. Algerian slave trade and piracy immediately ceased after the French conquered Algiers.

In 1795–96, the French Republic contracted to purchase wheat for the French army from two Jewish merchants in Algiers. The merchants, who had debts to Hussein Dey, the Dey of Algiers, claimed inability to pay those debts until France paid its debts to them. The dey unsuccessfully negotiated with Pierre Deval, the French consul, to rectify this situation, and suspected Deval of collaborating with the merchants against him, especially since the French government made no provision to pay the merchants in 1820. Deval's nephew Alexandre, the consul in Bône, further angered the dey by fortifying French storehouses in Bône and La Calle despite prior agreements. 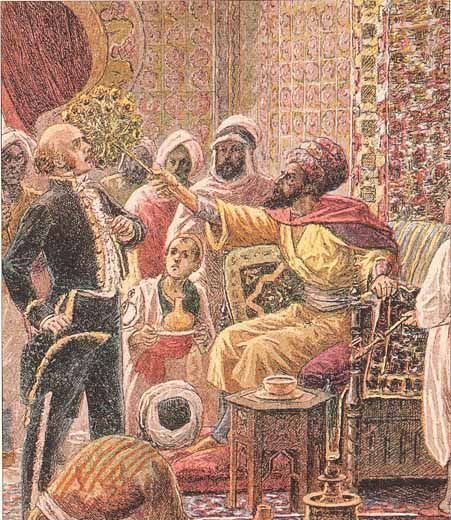 After a contentious meeting on 29 April 1827 in which Deval refused to provide satisfactory answers, the dey struck Deval with his fly-whisk (then called a fan). Charles X used this slight against his diplomatic representative to first demand an apology from the dey, and then to initiate a blockade against the port of Algiers. The blockade lasted for three years, and was primarily to the detriment of French merchants who were unable to do business with Algiers, while Barbary pirates were still able to evade the blockade. When France in 1829 sent an ambassador to the dey with a proposal for negotiations, he responded with cannon fire directed toward one of the blockading ships. The French then decided that more forceful action was required. Following the failure of the ambassador's visit, Charles appointed as President Jules, Prince de Polignac, a hardline conservative. This outraged the liberal French opposition, which then had a majority in the Chamber of Deputies. Polignac opened negotiations with Muhammad Ali of Egypt to essentially divide up North Africa. Ali, although nominally a vassal of the Ottomans, eventually rejected this idea. As popular opinion continued to rise against Polignac and the King, they decided that a foreign policy victory such as the capture of Algiers would turn opinion in their favour again.

Invasion of Algiers, war with the regency 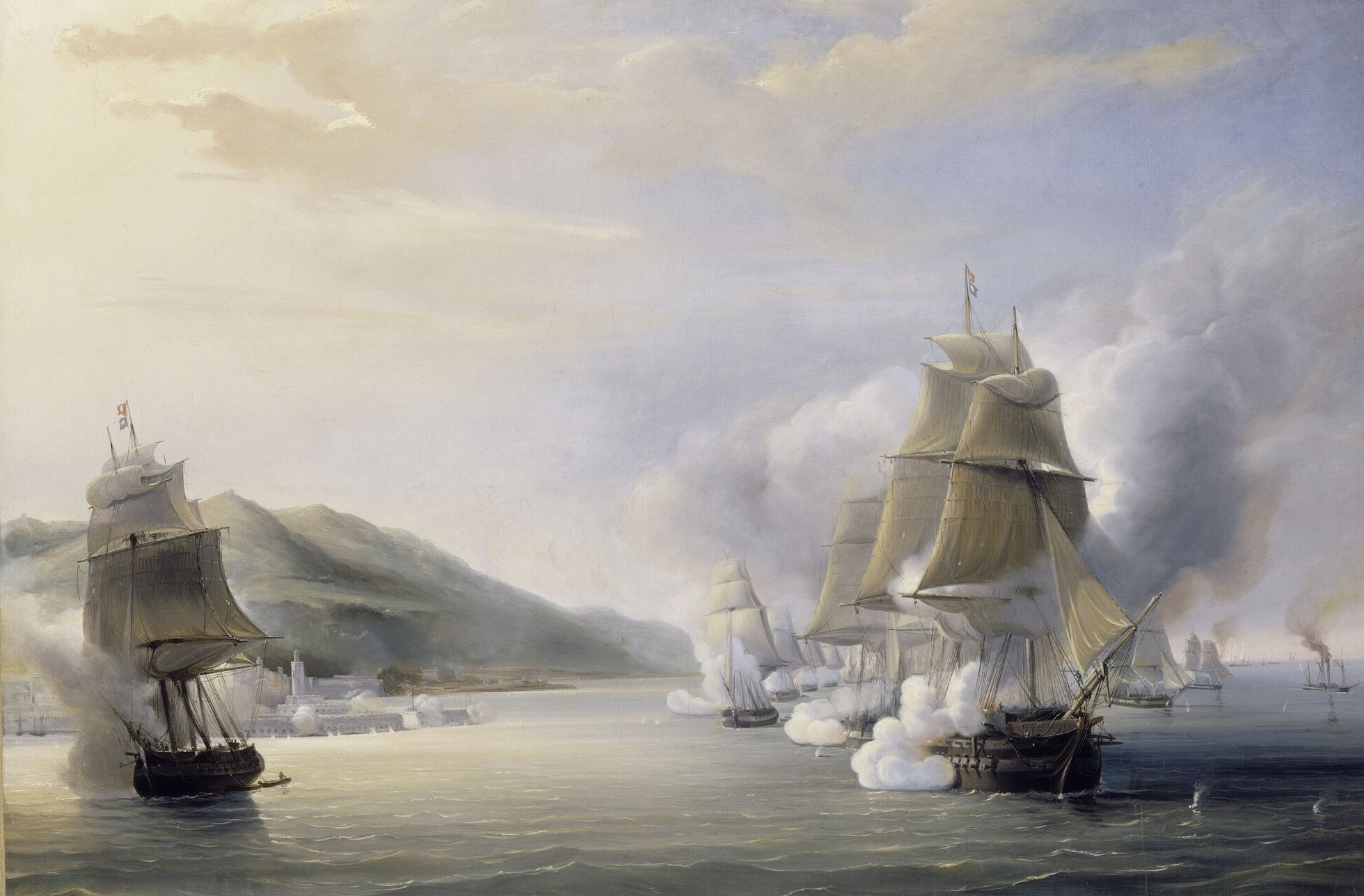 Admiral Duperré took command in Toulon of an armada of 600 ships and then headed for Algiers. Following a plan for the invasion of Algeria originally developed under Napoleon in 1808, General de Bourmont then landed 34,000 soldiers west of Algiers, at Sidi Ferruch, on 14 June 1830. To face the French, the dey sent 7,000 janissaries, 19,000 troops from the beys of Constantine and Oran, and about 17,000 Kabyles. The French established a strong beachhead and pushed toward Algiers, thanks in part to superior artillery and better organization. On 19 June the French defeated the dey's army at the battle of Staouéli, and entered Algiers on 5 July after a three-week campaign. The dey accepted capitulation in exchange for his freedom and the offer to retain possession of his personal wealth. Five days later, he went into exile in Naples with his family. The Turkish Janissaries also quit the territory, leaving for Turkey. The dey's departure ended 313 years of Ottoman rule of the territory. While the French command had nominally agreed to preserve the liberties, properties, and religious freedoms of the inhabitants, French troops immediately began plundering the city, arresting and killing people for arbitrary reasons, seizing property, and desecrating religious sites. By mid-August, the last remnants of Turkish authority were summarily deported without opportunity to liquidate significant assets.