for assisting the alignment of the two heads.]] Free-space optical communication (FSO) is an optical communication technology that uses light propagating in free space to wirelessly transmit data for telecommunications or computer networking. "Free space" means air, outer space, vacuum, or something similar. This contrasts with using solids such as optical fiber cable. The technology is useful where the physical connections are impractical due to high costs or other considerations. 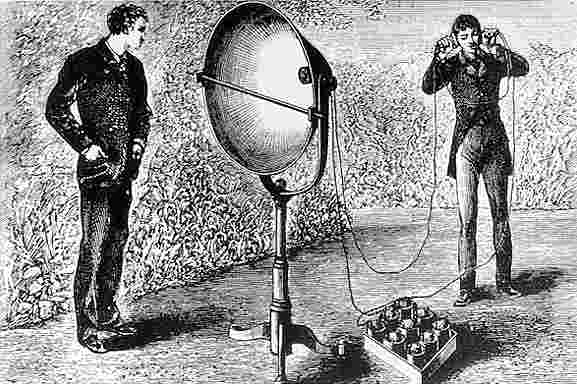 Optical communications, in various forms, have been used for thousands of years. The Ancient Greeks used a coded alphabetic system of signalling with torches developed by Cleoxenus, Democleitus and Polybius. In the modern era, semaphores and wireless solar telegraphs called heliographs were developed, using coded signals to communicate with their recipients. In 1880, Alexander Graham Bell and his assistant Charles Sumner Tainter created the photophone, at Bell's newly established Volta Laboratory in Washington, DC. Bell considered it his most important invention. The device allowed for the transmission of sound on a beam of light. On June 3, 1880, Bell conducted the world's first wireless telephone transmission between two buildings, some 213 meters (700 feet) apart. Its first practical use came in military communication systems many decades later, first for optical telegraphy. German colonial troops used heliograph telegraphy transmitters during the Herero and Namaqua genocide starting in 1904, in German South-West Africa (today's Namibia) as did British, French, US or Ottoman signals. During the trench warfare of World War I when wire communications were often cut, German signals used three types of optical Morse transmitters called ', the intermediate type for distances of up to 4 km (2.5 miles) at daylight and of up to 8 km (5 miles) at night, using red filters for undetected communications. Optical telephone communications were tested at the end of the war, but not introduced at troop level. In addition, special blinkgeräts were used for communication with airplanes, balloons, and tanks, with varying success. A major technological step was to replace the Morse code by modulating optical waves in speech transmission. Carl Zeiss, Jena developed the '' 80/80'' (literal translation: optical speaking device) that the German army used in their World War II anti-aircraft defense units, or in bunkers at the Atlantic Wall. The invention of lasers in the 1960s revolutionized free space optics. Military organizations were particularly interested and boosted their development. However, the technology lost market momentum when the installation of optical fiber networks for civilian uses was at its peak. Many simple and inexpensive consumer remote controls use low-speed communication using infrared (IR) light. This is known as consumer IR technologies.

* In 2008, MRV Communications introduced a free-space optics (FSO)-based system with a data rate of 10 Gbit/s initially claiming a distance of at high availability. This equipment is no longer available; before end-of-life, the product's useful distance was changed down to . * In 2013, the company MOSTCOM started to serially produce a new wireless communication system that also had a data rate of 10 Gbit/s as well as an improved range of up to , but to get to 99.99% uptime the designers used an RF hybrid solution, meaning the data rate drops to extremely low levels during atmospheric disturbances (typically down to 10 Mbit/s). In April 2014, the company with Scientific and Technological Centre "Fiord" demonstrated the transmission speed 30 Gbit/s under "laboratory conditions". In 2018 Mostcom started to export 30 Gbps system on the world telecommunications market. * LightPointe offers many similar hybrid solutions to MOSTCOM's offering.

The reliability of FSO units has always been a problem for commercial telecommunications. Consistently, studies find too many dropped packets and signal errors over small ranges (). This is from both independent studies, such as in the Czech republic, as well as formal internal nationwide studies, such as one conducted by MRV FSO staff. Military based studies consistently produce longer estimates for reliability, projecting the maximum range for terrestrial links is of the order of . All studies agree the stability and quality of the link is highly dependent on atmospheric factors such as rain, fog, dust and heat. Relays may be employed to extend the range for FSO communications. 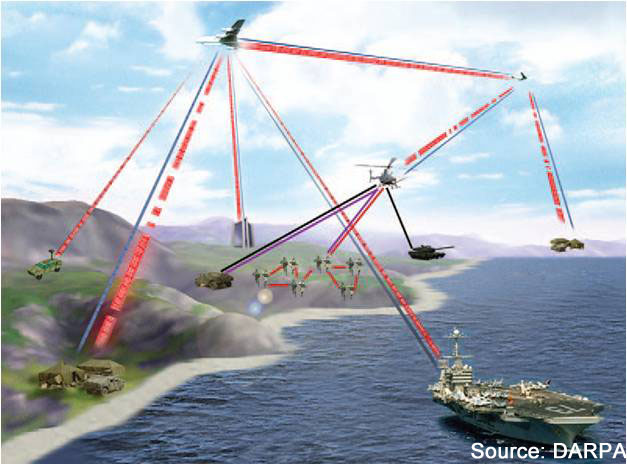 The main reason terrestrial communications have been limited to non-commercial telecommunications functions is fog. Fog consistently keeps FSO laser links over from achieving a year-round bit error rate of 1 per 100,000. Several entities are continually attempting to overcome these key disadvantages to FSO communications and field a system with a better quality of service. DARPA has sponsored over US$130 million in research towards this effort, with the ORCA and ORCLE programs. Other non-government groups are fielding tests to evaluate different technologies that some claim have the ability to address key FSO adoption challenges. , none have fielded a working system that addresses the most common atmospheric events. FSO research from 1998–2006 in the private sector totaled $407.1 million, divided primarily among four start-up companies. All four failed to deliver products that would meet telecommunications quality and distance standards: * Terabeam received approximately $575 million in funding from investors such as Softbank, Mobius Venture Capital and Oakhill Venture Partners. AT&T and Lucent backed this attempt. The work ultimately failed, and the company was purchased in 2004 for $52 million (excluding warrants and options) by Falls Church, Va.-based YDI, effective June 22, 2004, and used the name Terabeam for the new entity. On September 4, 2007, Terabeam (then headquartered in San Jose, California) announced it would change its name to Proxim Wireless Corporation, and change its NASDAQ stock symbol from TRBM to PRXM. * AirFiber received $96.1 million in funding, and never solved the weather issue. They sold out to MRV communications in 2003, and MRV sold their FSO units until 2012 when the end-of-life was abruptly announced for the Terescope series.

The first gigabit laser-based communication was achieved by the European Space Agency and called the European Data Relay System (EDRS) on November 28, 2014. The system is operational and is being used on a daily basis.

NASA's OPALS announced a breakthrough in space-to-ground communication December 9, 2014, uploading 175 megabytes in 3.5 seconds. Their system is also able to re-acquire tracking after the signal was lost due to cloud cover. In the early morning hours of Oct. 18, 2013, NASA's Lunar Laser Communication Demonstration (LLCD) made history, transmitting data from lunar orbit to Earth at a rate of 622 megabits per second (Mbit/s). LLCD was flown aboard the Lunar Atmosphere and Dust Environment Explorer satellite (LADEE), whose primary science mission was to investigate the tenuous and exotic atmosphere that exists around the moon. In January 2013, NASA used lasers to beam an image of the Mona Lisa to the Lunar Reconnaissance Orbiter roughly 390,000 km (240,000 mi) away. To compensate for atmospheric interference, an error correction code algorithm similar to that used in CDs was implemented. A two-way distance record for communication was set by the Mercury laser altimeter instrument aboard the ''MESSENGER'' spacecraft, and was able to communicate across a distance of 24 million km (15 million miles), as the craft neared Earth on a fly-by in May, 2005. The previous record had been set with a one-way detection of laser light from Earth, by the Galileo probe, of in 1992. Quote from Laser Communication in Space Demonstrations (EDRS)

thumb|right|250px|free_implementation_of_FSO_using_high-intensity_[[Light-emitting_diode.html" style="text-decoration: none;"class="mw-redirect" title="GNU Free Documentation License">free implementation of FSO using high-intensity LEDs..html" style="text-decoration: none;"class="mw-redirect" title="Light-emitting diode">LEDs.">Light-emitting diode">LEDs. In 2001, Twibright Labs released Ronja Metropolis, an open source DIY 10 Mbit/s full duplex LED FSO over . In 2004, a Visible Light Communication Consortium was formed in Japan. This was based on work from researchers that used a white LED-based space lighting system for indoor local area network (LAN) communications. These systems present advantages over traditional UHF RF-based systems from improved isolation between systems, the size and cost of receivers/transmitters, RF licensing laws and by combining space lighting and communication into the same system. In January 2009, a task force for visible light communication was formed by the Institute of Electrical and Electronics Engineers working group for wireless personal area network standards known as IEEE 802.15.7. A trial was announced in 2010, in St. Cloud, Minnesota. Amateur radio operators have achieved significantly farther distances using incoherent sources of light from high-intensity LEDs. One reported in 2007. However, physical limitations of the equipment used limited bandwidths to about 4 kHz. The high sensitivities required of the detector to cover such distances made the internal capacitance of the photodiode used a dominant factor in the high-impedance amplifier which followed it, thus naturally forming a low-pass filter with a cut-off frequency in the 4 kHz range. Use of lasers can reach very high data rates which are comparable to fiber communications. Projected data rates and future data rate claims vary. A low-cost white LED (GaN-phosphor) which could be used for space lighting can typically be modulated up to 20 MHz. Data rates of over 100 Mbit/s can be easily achieved using efficient modulation schemes and Siemens claimed to have achieved over 500 Mbit/s in 2010. Research published in 2009, used a similar system for traffic control of automated vehicles with LED traffic lights. In September 2013, pureLiFi, the Edinburgh start-up working on Li-Fi, also demonstrated high speed point-to-point connectivity using any off-the-shelf LED light bulb. In previous work, high bandwidth specialist LEDs have been used to achieve the high data rates. The new system, the Li-1st, maximizes the available optical bandwidth for any LED device, thereby reducing the cost and improving the performance of deploying indoor FSO systems.

Typically, best use scenarios for this technology are: * LAN-to-LAN connections on campuses at Fast Ethernet or Gigabit Ethernet speeds * LAN-to-LAN connections in a city, a metropolitan area network * To cross a public road or other barriers which the sender and receiver do not own * Speedy service delivery of high-bandwidth access to optical fiber networks * Converged voice-data connection * Temporary network installation (for events or other purposes) * Reestablish high-speed connection quickly (disaster recovery) * As an alternative or upgrade add-on to existing wireless technologies ** Especially powerful in combination with auto aiming systems, to power moving cars or a laptop while moving. or to use auto-aiming nodes to create a network with other nodes. * As a safety add-on for important fiber connections (redundancy) * For communications between spacecraft, including elements of a satellite constellation * For inter- and intra-chip communication The light beam can be very narrow, which makes FSO hard to intercept, improving security. It is comparatively easy to encrypt any data traveling across the FSO connection for additional security. FSO provides vastly improved electromagnetic interference (EMI) behavior compared to using microwaves.