Click Here for Items Related To - First Republic of Armenia


The First Republic of Armenia, officially known at the time of its existence as the Republic of Armenia (classical hy|Հայաստանի հանրապետութիւն), was the first modern Armenian state since the loss of Armenian statehood in the Middle Ages. The republic was established in the Armenian-populated territories of the disintegrated Russian Empire, known as Eastern Armenia or Russian Armenia. The leaders of the government came mostly from the Armenian Revolutionary Federation (ARF or Dashnaktsutyun). The First Republic of Armenia bordered the Democratic Republic of Georgia to the north, the Ottoman Empire to the west, Persia to the south, and the Azerbaijan Democratic Republic to the east. It had a total land area of roughly 70,000 km², and a population of 1.3 million. The Armenian National Council declared the independence of Armenia on 28 May 1918. From the very onset, Armenia was plagued with a variety of domestic and foreign problems. A humanitarian crisis emerged from the aftermath of the Armenian Genocide as tens of thousands of Armenian refugees from the Ottoman Empire settled there. The republic lasted for over two years, during which time it was involved in several armed conflicts caused by territorial disputes. By late 1920, the nation was conquered by the Russian Red Army. The First Republic, along with the Republic of Mountainous Armenia which repelled the Soviet invasion until July 1921, ceased to exist as an independent state, superseded by the Armenian Soviet Socialist Republic that became part of the Soviet Union in 1922. After the fall of the Soviet Union, the republic regained its independence as the current Republic of Armenia in 1991.

The Russian offensive during the Caucasus Campaign of World War I, the subsequent occupation, and the creation of a provisional administrative government gave hope for ending Ottoman Turkish rule in Western Armenia. With the help of several battalions of Armenians recruited from the Russian Empire, the Russian army had made progress on the Caucasus Front, advancing as far as the city of Erzerum in 1916. The Russians continued to make considerable advances even after the toppling of Tsar Nicholas II in February 1917. In March 1917, the spontaneous revolution that toppled Tsar Nicholas and the Romanov dynasty established a caretaker administration, known as the Provisional Government. Shortly after, the Provisional Government replaced Grand Duke Nicholas' administration in the Caucasus with the five-member Special Transcaucasian Committee, known by the acronym Ozakom. The Ozakom included Armenian Democrat Mikayel Papadjanian, and was set to heal wounds inflicted by the old regime. In doing so, Western Armenia was to have a general commissar and was to be subdivided into the districts of Trebizond, Erzerum, Bitlis, and Van. The decree was a major concession to the Armenians: Western Armenia was placed under the central government and through it under immediate Armenian jurisdiction. Dr. Hakob Zavriev would serve as the assistant for civil affairs and he in turn would see to it that most civil officials were Armenian. In October 1917, the Bolsheviks seized power from the Provisional Government and announced that they would be withdrawing troops from both the Western and Caucasus fronts. The Armenians, Georgians, and Muslims of the Caucasus all rejected the Bolsheviks' legitimacy.

On December 5, 1917, the Ottoman Empire and the Transcaucasian Commissariat signed the armistice of Erzincan, ending armed conflict. After the Bolshevik seizure of power, a multinational congress of Transcaucasian representatives met to create a provisional regional executive body known as the Transcaucasian Seim. The Commissariat and the Seim were heavily encumbered by the pretense that the South Caucasus formed an integral unit of a non-existent Russian democracy. The Armenian deputies in the Seim were hopeful that the anti-Bolshevik forces in Russia would prevail in the Russian Civil War and rejected any idea of separating from Russia. In February 1918, the Armenians, Georgians and Muslims had reluctantly joined to form the Transcaucasian Federation, but disputes among the three groups continued as unity began to falter. On March 3, 1918, Russia followed the armistice of Erzincan with the Treaty of Brest-Litovsk and left the war. It ceded territory from March 14 to April 1918, when a conference was held between the Ottoman Empire and the delegation of the Seim. Under the Treaty of Brest-Litovsk, the Russians allowed the Turks to retake the Western Armenian provinces, as well as to take over the provinces of Kars, Batum, and Ardahan. In addition to these provisions, a secret clause obligated the Armenians and Russians to demobilize their forces in both western and eastern Armenia. Having killed and deported most of Armenians of Western Armenia during the Armenian Genocide, the Ottoman Empire intended to eliminate the Armenian population of Eastern Armenia. Shortly after the signing of Brest-Litovsk the Turkish army began its advance, taking Erzurum in March and Kars in April, which the Transcaucasian government of Nikolay Chkheidze had ordered soldiers to abandon. Beginning on May 21, the Ottoman army moved ahead again.

On May 11, 1918, a new peace conference opened at Batum. At this conference, the Ottomans extended their demands to include Tiflis, as well as Alexandropol and Echmiadzin, which they wanted for a railroad to be built to connect Kars and Julfa with Baku. The Armenian and Georgian members of the Republic's delegation began to stall. On May 26, 1918, Georgia declared independence; on May 28, it signed the Treaty of Poti, and received protection from Germany. The following day, the Muslim National Council in Tiflis announced the establishment of the Democratic Republic of Azerbaijan. Having been abandoned by its regional allies, the Armenian National Council, based in Tiflis and led by Russian Armenian intellectuals who represented Armenian interests in the Caucasus, declared its independence on May 28. It dispatched Hovhannes Kajaznuni and Alexander Khatisyan, both members of the ARF, to Yerevan to take over power and issued the following statement on May 30 (retroactive to May 28):

Meanwhile, the Turks had taken Alexandropol and were intent on eliminating the center of Armenian resistance based in Yerevan. The Armenians were able to stave off total defeat and delivered crushing blows to the Turkish army in the battles of Sardarapat, Karakilisa and Abaran. The Republic of Armenia had to sue for negotiations at the Treaty of Batum, which was signed in Batum on June 4, 1918. It was Armenia's first treaty. After the Ottoman Empire took vast swathes of territory and imposed harsh conditions, the new republic was left with 10,000 square kilometers. 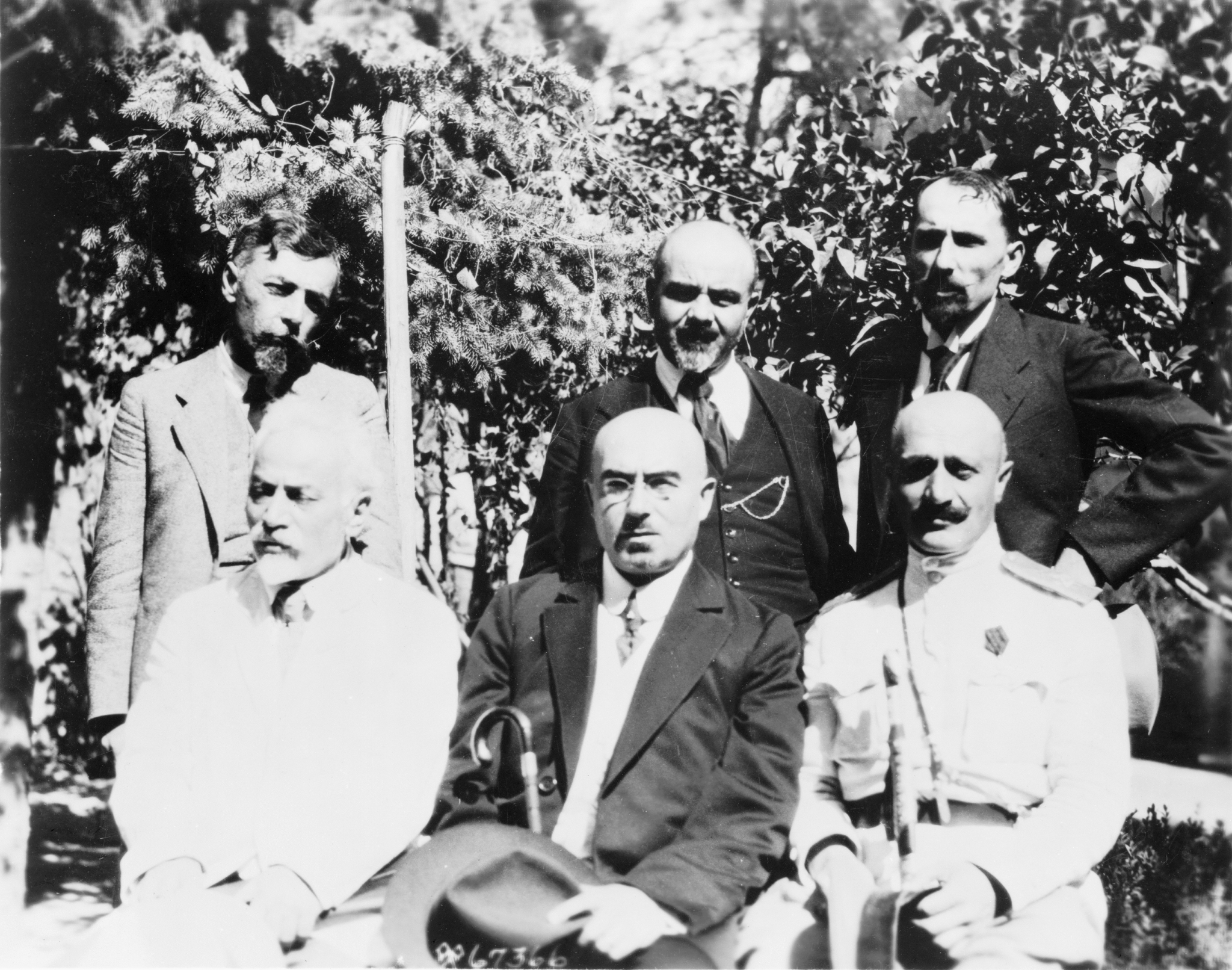 thumb|The Government building in Yerevan On May 30, 1918 the Armenian Revolutionary Federation had decided that Armenia should be a republic under a provisional coalition government. The declaration stated that the Republic of Armenia was to be a self-governing state, endowed with a constitution, the supremacy of state authority, independence, sovereignty, and plenipotentiary power. Kajaznuni became the country's first Prime Minister and Aram Manukian was the first minister of Interior. The constitution granted universal suffrage to all citizens, regardless of qualifiers, who were at least twenty years old. The first elections under the new constitution occurred between 21 and 23 June 1919 and of the 80 members elected to Parliament, three were women: Perchuhi Partizpanyan-Barseghyan, Varvara Sahakyan and Katarine Zalyan-Manukyan Armenia established a Ministry of Interior and created a police force. The Armenian parliament passed a law on the police on April 21, 1920, specifying its structure, jurisdiction, and responsibilities. The Interior Ministry was also responsible for communications and telegraph, railroad, and the public school system, in addition to enforcing law and order. The reforms came soon and each of these departments became ministries. In 1919, the leaders of the Republic had to deal with issues on three fronts: domestic, regional, and international. The Armenian Congress of Eastern Armenians that took control in 1918 fell apart and in June 1919, the first national elections would be held. During the 1920s, which began under the premiership of Hovhannes Kajaznuni, Armenians from within the former Russian Empire and the United States would assist in developing the fledgling Republic's judicial system. In January 1919 another important milestone was completed by the Armenian Parliament, which was the opening of the country's first state university, Yerevan State University.


Speakers of the Parliament of Republic of Armenia


Prime Ministers in the Republic of Armenia

Thanks to the efforts of Armenian National Council of Tiflis, the Armenian National Corps was established to fight against the Ottoman offensive of late 1917 and early 1918. On December 13, 1917, the Armenian National Corps was established, with General Tovmas Nazarbekian was appointed commander and Drastamat Kanayan became the defence minister. Nazarbekian used his experience in the Russian Caucasus Army to aid in the creation of the regular army. Units of this corps formed the basis of the Armenian army. Armenian conscripts and volunteers from the Russian Army later established the core of the armed forces of the First Republic. In accordance with the harsh terms of the Treaty of Batum signed on June 4, 1918 the Ottoman Empire demobilized most of the Armenian army. They were allowed only a limited force and were severely restricted in where their troops could operate.

The republic included the following areas of the former Russian Empire divisions.

Before World War I, in 1914, the territory was part of Russian Armenia; among the total Armenian population of 2,800,000, about 1,500,000 lived in the Ottoman Empire, and the remainder were in Russian Armenia.