Click Here for Items Related To - Federation of Bosnia and Herzegovina 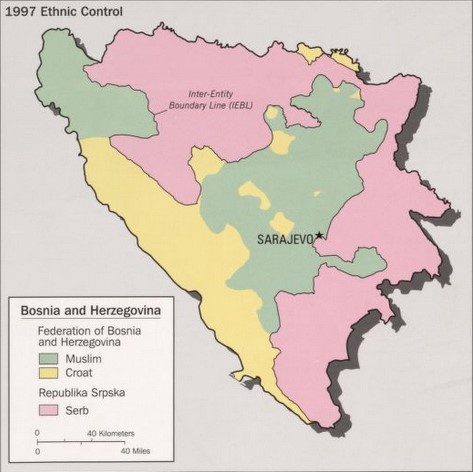 By the Dayton Agreement of 1995 that ended the four-year war, the Federation of Bosnia and Herzegovina was defined as one of the two entities of Bosnia and Herzegovina, comprising 51% of country's area, alongside Republika Srpska. Cantons and federal structure were built rather slowly after the war. Separatist Croat Herzeg-Bosnia institutions existed and functioned parallel to Federation ones up until 1996–97, when they were phased out. On 8 March 2000, the Brčko District was formed as an autonomous district within Bosnia and Herzegovina and it was created from part of the territory of both Bosnian entities. Brčko District is now a condominium that belongs to both entities. In 2001–2002, the Office of the High Representative (OHR) imposed amendments to the Federation's Constitution and its electoral law, in compliance with the decisions of the Constitutional Court of Bosnia and Herzegovina on the political equality of the three constituent peoples (U-5/98). This triggered the grievances of Bosnian Croats, who claimed they were deprived of their rights to representation as Bosniaks had come to control the majority in the upper house as well. Dissatisfied Croat politicians set up a separate Croatian National Assembly, held a referendum parallel to the elections and proclaimed their self-rule in Croat-majority areas in the Federation. Their attempts ended shortly after a crackdown by SFOR and legal proceedings. Dissatisfied with the representation of Croats in the Federation, Croat political parties insist on creating a Croat-majority federal unit instead of several cantons. SDA and other Bosniak parties strongly oppose this. In September 2010, the International Crisis Group warned that "disputes among and between Bosniak and Croat leaders and a dysfunctional administrative system have paralyzed decision-making, put the entity on the verge of bankruptcy and triggered social unrest".