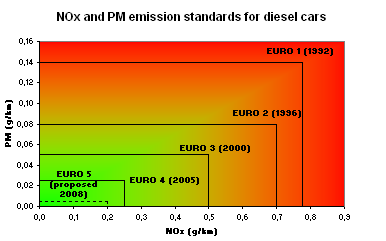 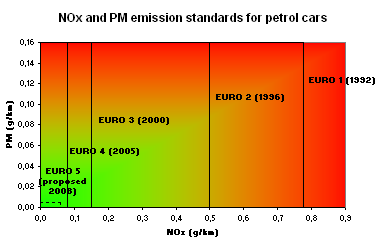 European emission standards are vehicle emission standards for exhaust emissions of new vehicles sold in the European Union and EEA member states. The standards are defined in a series of European Union directives staging the progressive introduction of increasingly stringent standards. Details of Euro 7, the final standard, will be announced in 2021 and probably come into force in 2025, before the phase-out of fossil fuel vehicles takes place to further limit climate change and air pollution in Europe. It is likely that manufacturers in the United Kingdom will also follow Euro 7, as they did the earlier standards. The details of Euro 7 are likely to be influenced by European Green Deal targets to reduce carbon dioxide emissions.

In the European Union, emissions of nitrogen oxides (), total hydrocarbon (THC), non-methane hydrocarbons (NMHC), carbon monoxide (CO) and particulate matter (PM) are regulated for most vehicle types, including cars, trucks (lorries), locomotives, tractors and similar machinery, barges, but excluding seagoing ships and aeroplanes. For each vehicle type, different standards apply. Compliance is determined by running the engine at a standardised test cycle. Non-compliant vehicles cannot be sold in the EU, but new standards do not apply to vehicles already on the roads. No use of specific technologies is mandated to meet the standards, though available technology is considered when setting the standards. New models introduced must meet current or planned standards, but minor lifecycle model revisions may continue to be offered with pre-compliant engines. Along with Emissions standards the European Union has also mandated a number of computer on-board diagnostics for the purposes of increasing safety for drivers. These standards are used in relation to the emissions standards. In the early 2000s, Australia began harmonising Australian Design Rule certification for new motor vehicle emissions with Euro categories. Euro III was introduced on 1 January 2006 and is progressively being introduced to align with European introduction dates.

Emission standards for passenger cars and light commercial vehicles are summarised in the following tables. Since the Euro 2 stage, EU regulations introduce different emission limits for diesel and petrol vehicles. Diesels have more stringent CO standards but are allowed higher emissions. Petrol-powered vehicles are exempted from particulate matter (PM) standards through to the Euro 4 stage, but vehicles with direct injection engines are subject to a limit of 0.0045 g/km for Euro 5 and Euro 6. A particulate number standard (P) or (PN) has been introduced in 2011 with Euro 5b for diesel engines and in 2014 with Euro 6 for petrol engines. From a technical perspective, European emissions standards do not reflect everyday usage of the vehicle as manufacturers are allowed to lighten the vehicle by removing the back seats, improve aerodynamics by taping over grilles and door handles or reduce the load on the generator by switching off the headlights, the passenger compartment fan or simply disconnecting the alternator which charges the battery. European emission standards for passenger cars (Category M)*, g/km


Emission standards for trucks and buses

Enhanced environmentally friendly vehicle or EEV is a term used in the European emission standards for the definition of a "clean vehicle" > 3.5 tonne in the category M2 and M3. The standard lies between the levels of Euro V and Euro VI.

The term ''non-road mobile machinery'' (NRMM) is a term used in the European emission standards to control emissions of engines that are not used primarily on public roadways. This definition includes off-road vehicles as well as railway vehicles. European standards for non-road diesel engines harmonize with the US EPA standards, and comprise gradually stringent tiers known as Stage I–V standards. The Stage I/II was part of the 1997 directive (Directive 97/68/EC). It was implemented in two stages with Stage I implemented in 1999 and Stage II implemented between 2001 and 2004. In 2004, the European Parliament adopted Stage III/IV standards. The Stage III standards were further divided into Stage III A and III B were phased in between 2006 and 2013. Stage IV standards are enforced from 2014. Stage V standards are phased-in from 2018 with full enforcement from 2021. As of 1 January 2015, EU Member States have to ensure that ships in the Baltic, the North Sea and the English Channel are using fuels with a sulphur content of no more than 0.10%. Higher sulphur contents are still possible, but only if the appropriate exhaust cleaning systems are in place.

Just as important as the regulations are the tests needed to ensure adherence to regulations. These are laid out in standardised emission test cycles used to measure emissions performance against the regulatory thresholds applicable to the tested vehicle.

Since the Euro 3 regulations in 2000, performance has been measured using the New European Driving Cycle test (NEDC; also known as MVEG-B), with a "cold start" procedure that eliminates the use of a 40-second engine warm-up period found in the ECE+EUDC test cycle (also known as MVEG-A).

The two groups of emissions standards for heavy duty vehicles each have different appropriate test requirements. Steady-state testing is used for diesel engines only, while transient testing applies to both diesel and petrol engines.

For the emission standards to deliver actual emission reductions it is crucial to use a test cycle that reflects real-world driving conditions. It was discovered that vehicle manufacturers would optimise emissions performance only for the test cycle, whilst emissions from typical driving conditions proved to be much higher than when tested. Some manufacturers were also found to use so-called ''defeat devices'' where the engine control system would recognise that the vehicle was being tested, and would automatically switch to a mode optimised for emissions performance. The use of a defeat device is expressly forbidden in EU law.