Euboea or Evia ( el|Εύβοια, , ; grc|Εὔβοια, , ) is the second-largest Greek island in area and population, after Crete. It is separated from Boeotia in mainland Greece by the narrow Euripus Strait (only at its narrowest point). In general outline it is a long and narrow island; it is about long, and varies in breadth from to . Its geographic orientation is from northwest to southeast, and it is traversed throughout its length by a mountain range, which forms part of the chain that bounds Thessaly on the east, and is continued south of Euboea in the lofty islands of Andros, Tinos and Mykonos. It forms most of the regional unit of Euboea, which also includes Skyros and a small area of the Greek mainland.

Like most of the Greek islands, Euboea was known by other names in antiquity, such as ''Macris'' (Μάκρις) and ''Doliche'' (Δολίχη) from its elongated shape, or ''Ellopia'', ''Aonia'' and ''Abantis'' from the tribes inhabiting it. Its ancient and current name, Εὔβοια, derives from the words εὖ "good", and βοῦς "ox", meaning "(the land of) the well(-fed) oxen". In the Middle Ages, the island was often referred to by Byzantine authors by the name of its capital, ''Chalcis'' (Χαλκίς) or ''Euripos'' (Εὔριπος, the name of the strait that separates the island from the Greek mainland), although the ancient name Euboea remained in use by classicizing authors until the 16th century. The phrase στὸν Εὔριπον 'to Evripos', rebracketed as στὸ Νεὔριπον 'to Nevripos', became ''Negroponte'' ("Black Bridge") in Italian by folk etymology, the ''ponte'' 'bridge' being interpreted as the bridge of Chalcis. This name was most relevant when the island was under Venetian rule. That name entered common use in the West in the 13th century, with other variants being Egripons, Negripo, and Negropont. Under Ottoman rule, the island and its capital were known as ''Eğriboz'' or ''Ağriboz'', again after the Euripos strait. 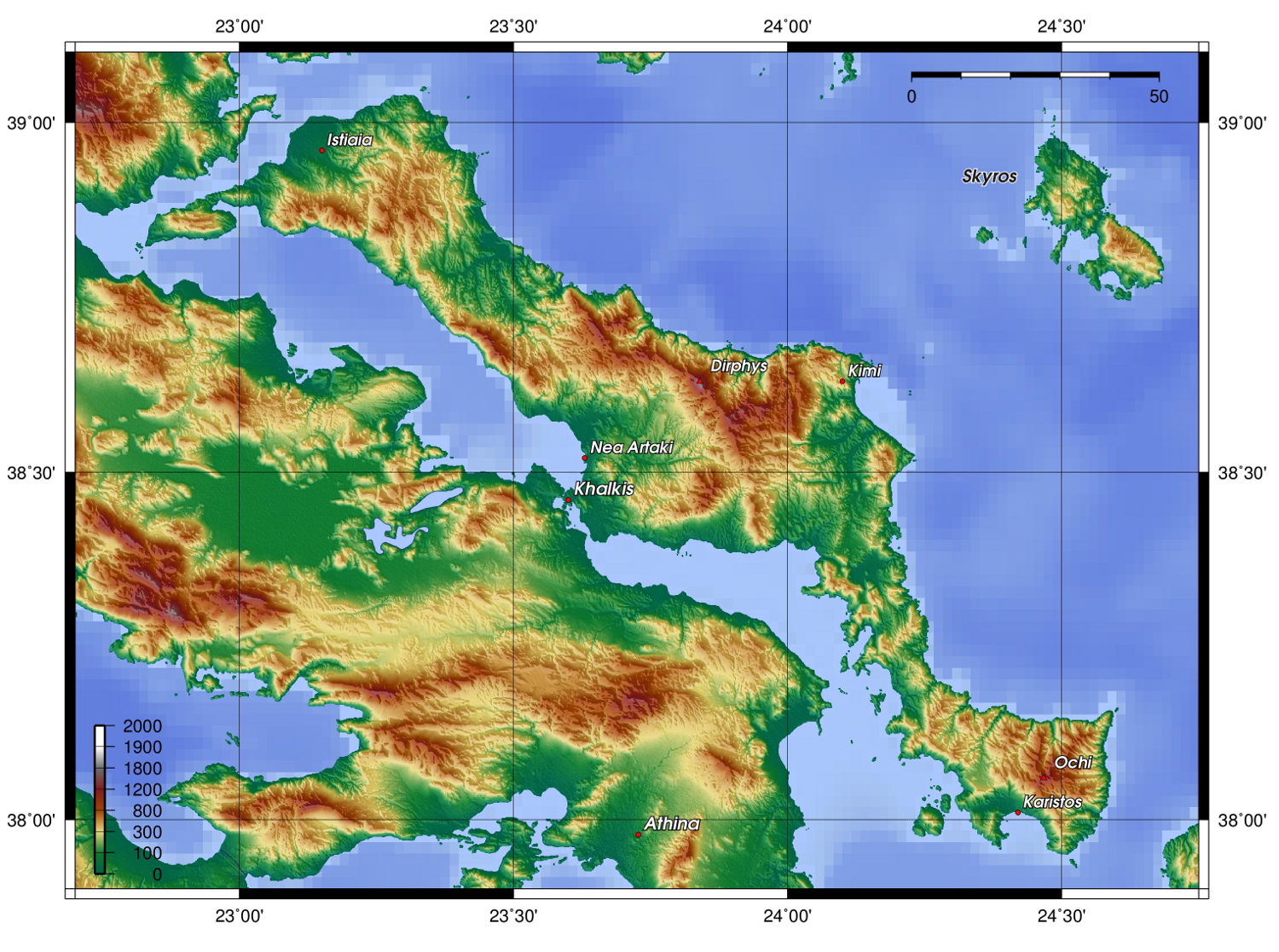 Euboea was believed to have originally formed part of the mainland, and to have been separated from it by an earthquake. This is fairly probable, because it lies in the neighbourhood of a fault line, and both Thucydides and Strabo write that the northern part of the island had been shaken at different periods. In the neighbourhood of Chalcis, both to the north and the south, the bays are so confined as to make plausible the story of Agamemnon's fleet having been detained there by contrary winds. At Chalcis itself, where the strait is narrowest at only 40 m, it is called the Euripus Strait. The extraordinary changes of tide that take place in this passage have been a subject of note since classical times, and it was so feared by sailors that the principal line of traffic from the north of the Aegean to Athens used to bypass Chalcis and the Euboic Sea. At one moment the current runs like a river in one direction, and shortly afterwards with equal velocity in the other. A bridge was first constructed here in the twenty-first year of the Peloponnesian War (410 BC). Geography and nature divide the island itself into three distinct parts: the fertile and forested north; the mountainous centre, with agriculture limited to the coastal valleys; and the barren south. The main mountains include Dirfi (), Pyxaria () in the northeast and Ochi (). The neighboring gulfs are the Pagasetic Gulf in the north, Malian Gulf, North Euboean Gulf in the west, the Euboic Sea and the Petalion Gulf. At the 2001 census the island had a population of 198,130 and a total land area of .

The history of the island of Euboea is largely that of its two principal cities, Chalcis and Eretria, both mentioned in the Catalogue of Ships. Both cities were settled by Ionian Greeks from Attica, and would eventually settle numerous colonies in Magna Graecia and Sicily, such as Cumae and Rhegium, and on the coast of Macedonia. This opened new trade routes to the Greeks, and extended the reach of Western Civilization. The commercial influence of these city-states is evident in the fact that the Euboic scale of weights and measures was used among the Ionic cities generally, and in Athens until the end of the 7th century BC, during the time of Solon. The classicist Barry B. Powell has proposed that Euboea may have been where the Greek alphabet was first employed, c. 775-750 BC, and that Homer may have spent part of his life on the island.

Chalcis and Eretria were rival cities, and appear to have been equally powerful for a while. One of the earliest major military conflicts in Greek history took place between them, known as the Lelantine War, in which many other Greek city-states also took part. In 490 BC, Eretria was utterly ruined by the Persian armies. Eritrea, Athens, and other Ionian Greek states had previously burned the Persian city of Sardis and participated in the Ionian revolution. After Eritrea was destroyed, its inhabitants were transported as captives to Persia. Though it was restored nearby its original site after the Battle of Marathon, the city never regained its former eminence. Following the infamous battles of Thermopylae and Artemisium, Persian forces captured and sacked Athens, and also took Euboea, Boeotia, and Attica, allowing them to overrun almost all of Greece. Both cities gradually lost influence to Athens, which saw Euboea as a strategic territory. Euboea was an important source of grain and cattle, and controlling the island meant Athens could prevent invasion and better protect its trade routes from piracy. Athens invaded Chalcis in 506 BC and settled 4,000 Attic Greeks on their lands. After this conflict, the whole of the island was gradually reduced to an Athenian dependency. Another struggle between Euboea and Athens broke out in 446. Led by Pericles, the Athenians subdued the revolt, and captured Histiaea in the north of the island for their own settlement. By 410 BC, during the Peloponnesian War, the island succeeded in regaining its independence. Euboea participated in Greek affairs until it fell under the control of Philip II of Macedon after the Battle of Chaeronea in 338 BC. It was incorporated into the Roman Republic in the second century BC. Aristotle died on the island in 322 BC soon after fleeing Athens for his mother's family estate in Chalcis. From the early Hellenistic period to well into the Roman Imperial period, the island was organized into the Euboean League.

]] thumb|Bourtzi castle, File:Bourtzi_castle_Karystos_Euboea_Greece.jpg.html" style="text-decoration: none;"class="mw-redirect" title="Karystos">File:Bourtzi castle Karystos Euboea Greece.jpg">thumb|Bourtzi castle, Karystos Unlike much of [[Byzantine Greece, Euboea was spared the bulk of the barbarian raids during [[late antiquity and the early medieval period, due to its relatively isolated location. The [[Vandals]] raided its shores in 466 and in 475, but the island seems to have been left alone by the [[Pannonian Avars|Avars]] and [[Slavs]], and it was not until a failed Arab attack on Chalcis in the 870s that the island again came under threat. As a result, the island preserved a relative prosperity throughout the early medieval period, as attested by finds of mosaics, churches and sculpture throughout the 7th century, "even from remote areas of the island". In the 6th century, the ''Synecdemus'' listed four cities on the island, Aidipsos, Chalcis, Porthmos (modern Aliveri) and Karystos, and a number of other sites are known as bishoprics in the subsequent centuries (Oreoi and Avlon), although their urban character is unclear. In the 8th century, Euboea formed a distinct fiscal district (''dioikesis''), and then formed part of the theme of Hellas. In 1157 all the coastal towns of Euboea were destroyed by a Sicilian force, while Chalcis was burned down by the Venetians in 1171. Euboea came into prominence following the Fourth Crusade. In the partition of the Byzantine Empire by the crusaders after 1204, the island was occupied by a number of Lombard families, who divided it into three baronies, the Triarchy of Negroponte; each barony was split in 1216, giving six sestiere. The island's rulers came early on under the influence of the Venetian Republic, which secured control of the island's commerce in the War of the Euboeote Succession (1256–1258) and gradually expanded its control, until they acquired full sovereignty by 1390. On 12 July 1470, during the Ottoman–Venetian War of 1463–1479 and after a protracted and bloody siege, the well-fortified city of Negroponte (Chalcis) was wrested from Venice by Mehmed II and the whole island fell into the hands of the Ottoman Empire. The Doge Francesco Morosini besieged the city in 1688, but was forced to withdraw after three months. Although the name Negroponte remained current in European languages until the 19th century, the Turks themselves called the city and the island Eğriboz or Ağriboz after the Euripos Strait. Under Ottoman rule, Ağriboz was the seat of a sanjak that also encompassed much of Continental Greece. At the conclusion of the Greek War of Independence in 1830, the island returned to Greece and constituted a part of the newly established independent Greek kingdom.

Beginning in late 1943, 1,000 Greek Jews were smuggled from Salonika and Athens via the island by the Greek Resistance and British MI11 to Çesme in neutral Turkey, thereby escaping the Holocaust in Greece. Euboea is linked to the mainland by two bridges, one that runs through Chalcis and is also accessible from Thebes, and another which bypasses Chalcis and is accessed from Athens. All of Euboea's modern bridges are suspended. In the 1980s, the Dystos lake was filled with grass which was set on fire by farmers to make more farmland. This act caused devastation of much of the plants and the environment in that area. A part of the lake later regenerated. Also the municipalities of Anthidona and Avlida in the mid to late 20th century, which once were part of Boeotia, reverted to Chalcis. Since then, the postal codes corresponded with the rest of Euboea, including Skyros.

The promontory of Canaeum, which lies opposite the Malian Gulf, together with the neighbouring coast of Trachis, was the scene of the events connected with the death of Heracles, as described by Sophocles in the ''Trachiniae''. Based on the records of the 2nd century AD geographer Pausanias, it is suspected that the Titan god Crius is an indigenous deity.

The population of the island according to the census of 2001 was 198,130, making it the second most populous island of Greece. As a whole the Euboeans share a cultural identity similar to that of the people in the rest of Central Greece and they speak a southern variety of Greek. In the southern part of the island there are Arvanite communities, with the area south of Aliveri being the northernmost limit of their presence in Euboea. Sarakatsani and Vlachs could be found mainly in the mountainous areas in central and northern Euboea respectively, but nowadays they have abandoned the nomadic way of life and live permanently in the towns and villages across the island.

The mining areas include magnesite in Mantoudi and Limni, lignite in Aliveri and iron and nickel from Dirfys. Marble is mined north of Eretria which include ''Marmor Chalcidicum'' and asbestos in the northeastern part of Carystus in the Okhi mountain. The trees include chestnuts.

The island belongs to Euboea Prefecture which also includes two municipalities on the mainland, Anthidona and Avlida, as well as the island municipality of Skyros. At the 2001 census the prefecture had a population of 215,136 inhabitants, whereas the island itself had a population of 198,130. The prefecture's land area is 4,, whereas the total land area of the municipalities actually on the island is 3,, which includes that of numerous small offshore islets (Petalioi) near Euboea's southeastern tip.