Estes Park is a statutory town in Larimer County, Colorado, United States. A popular summer resort and the location of the headquarters for Rocky Mountain National Park, Estes Park lies along the Big Thompson River. Estes Park had a population of 5,858 at the 2010 census. Landmarks include The Stanley Hotel and The Baldpate Inn. The town overlooks Lake Estes and Olympus Dam.

Before Europeans came to the Estes Park valley, the Arapaho Indians lived there in the summertime and called the valley "the Circle." When three elderly Arapahoes visited Estes Park in 1914, they pointed out sites they remembered from their younger days. A photograph at the Estes Park Museum identified the touring party as Shep Husted, guide; Gun Griswold, a 73-year-old judge; Sherman Sage, a 63-year-old chief of police; Tom Crispin, 38-year-old reservation resident and interpreter; Oliver W. Toll, recorder; and David Robert Hawkins, a Princeton student. In the 1850s, the Arapaho had spent summers camped around Mary's Lake, where their rock fireplaces, tipi sites, and dance rings were still visible. They also recalled building eagle traps atop Longs Peak to get the war feathers coveted by all tribes. They remembered their routes to and from the valley in detail, naming trails and landmarks. They pointed out the site of their buffalo trap, and described the use of dogs to pack meat out of the valley. Their recollections included a battle with Apaches in the 1850s, and fights with Utes who came to the area to hunt bighorn sheep, so all three of those tribes used the valley's resources. Whites probably came into the Estes Park valley before the 1850s as trappers, but did not stay long. The town is named after Missouri native Joel Estes, who founded the community in 1859. Estes moved his family there in 1863. One of Estes' early visitors was William Byers, a newspaper editor who wrote of his attempted ascent of Longs Peak in 1864, publicizing the area as a pristine wilderness. Griff Evans and his family came to Estes Park in 1867 to act as caretakers for the former Estes ranch. Recognizing the potential for tourism, he began building cabins to accommodate travelers. Soon it was known as the first dude ranch in Estes Park, with guides for hunting, fishing, and mountaineering. 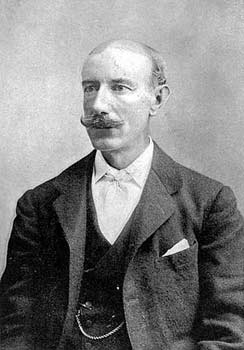 was commissioned by The 4th Earl of Dunraven and Mount-Earl to make a painting of the Estes Park and Longs Peak area in 1876 for $15,000. The painting, originally displayed in Dunraven Castle in Glamorgan, is now in the collection of the Denver Art Museum.]] Windham Wyndham-Quin, 4th Earl of Dunraven and Mount-Earl|The 4th Earl of Dunraven and Mount-Earl, a young Anglo-Irish peer, arrived in late December 1872 under the guidance of Texas Jack Omohundro, subsequently made numerous visits, and decided to take over the valley for his own private hunting preserve. Lord Dunraven's 'land grab' didn't work, but he controlled 6,000 acres before he changed tactics and opened the area's first resort, the Estes Park Hotel, which was destroyed by fire in 1911. In 1873, Englishwoman Isabella Bird, the daughter of an Anglican minister, came to the United States. Landing at San Francisco, she came overland to Colorado, where she borrowed a horse and set out to explore the Rocky Mountains with a guide, the notorious James Nugent, aka 'Rocky Mountain Jim'. She wrote ''A Lady's Life in the Rocky Mountains'', a memoir of their travels, including the breathtaking ascent of Longs Peak, where she was literally hauled up the steep pitches "like a bale of goods." On June 19, 1874, Rocky Mountain Jim and neighbor Griff Evans (see above) had an argument. Having had bitter history with each other, Nugent and Evans hated each other and were deep personal rivals when it came to tour guiding tourists. The argument escalated until Evans blasted Jim in the head with his rifle shotgun. Evans then traveled to Fort Collins to file an assault charge against Nugent, but he was arrested and tried for first degree murder when Jim Nugent died on September 9, 1874, of the bullet wound. Evans was put on trial, but the case was soon dismissed due to the lack of witnesses to the shooting. On August 9, 1875, the Loveland court-house acquitted Evans of any charges in the case. William Henry Jackson photographed Estes Park in 1873. Alex and Clara (Heeney) MacGregor arrived soon after and homesteaded at the foot of Lumpy Ridge. The MacGregor Ranch has been preserved as a historic site. In 1874, MacGregor incorporated a company to build a new toll road from Lyons, Colorado, to Estes Park. The road became what is today U.S. Highway 36. Before that time, however, the "road" was only a trail fit for pack horses. The improved road brought more visitors into Estes Park; some of them became full-time residents and built new hotels to accommodate the growing number of travelers. In 1884, Enos Mills (1870-1922) left Kansas and came to Estes Park, where his relative Elkanah Lamb lived. That move proved significant for Estes Park because Mills became a naturalist and conservationist who devoted his life after 1909 to preserving nearly a thousand square miles of Colorado as Rocky Mountain National Park. He succeeded and the park was dedicated in 1915. Enos Mills' younger brother Joe Mills (1880-1935) came to Estes Park in 1889. He wrote a series of articles about his youthful experiences for ''Boys Life'' which were later published as a book. After some years as a college athletics coach, he and his wife returned to Estes Park and built a hotel called The Crags on the north side of Prospect Mountain, overlooking the village. They ran that business in the summer while he continued his coaching career in winters at University of Colorado in Boulder. Many early visitors came to Estes Park in search of better health. The Rocky Mountain West especially attracted those with pulmonary diseases, and in Estes Park some resorts catered to them, providing staff physicians for their care.

In 1903, a new road was opened from Loveland through the Big Thompson River canyon to Estes Park, increasing access to the valley. In 1907, three Loveland men established the first auto stage line from Loveland to Estes Park with three five-passenger touring Stanley Steamers. The following year, Mr. Stanley built nine-passenger steam busses and opened a bus line between Lyons and Estes Park. By 1912, Estes Park had its own seasonal newspaper, the ''Estes Park Trail'', which provided advertising for the local hotels and other businesses. It was a year-round weekly by 1921. In 1949, Olympus Dam was finished, creating Lake Estes, giving the town its main source of drinking water. Today, Estes Park's outskirts include The Stanley Hotel, built in 1909. An example of Edwardian opulence, the building had Stephen King as a guest, inspiring him to change the locale for his novel ''The Shining'' from an amusement park to the Stanley's fictional stand-in, the Overlook Hotel. Olympus Dam, on the outskirts of the town, is the dam that creates Lake Estes, a lake which is the site for boating and swimming in Estes Park. There are some hotels on the shore, including the Estes Park Resort. Land was still being homesteaded in the area in 1914, when Katherine Garetson (1877-1963) filed on land near the base of Longs Peak. She built a cabin and started a business known as the Big Owl Tea Place. She proved up on her homestead claim in 1915, and left a memoir of her years there. In 1916 the Estes Valley Library was founded by the Estes Park Women's Club. It originally formed part of the old schoolhouse and contained only 262 printed works.