The Dubai Mall ( ar|دبي مول "Dubai Mall") is a shopping mall in Dubai. It is the largest mall in the world by total land area, and the 26th-largest shopping mall in the world by gross leasable area, tying with West Edmonton Mall and Fashion Island (Thailand)—both of which are older than it. It has a total retail floor area of 502,000 square metres (5,400,000 sq ft). Located in Dubai, United Arab Emirates, it is part of the 20-billion-dollar Downtown complex (called Downtown Dubai) adjacent to the iconic Burj Khalifa, and includes over 1,200 shops. In 2011, it was the most visited building on the planet, attracting over 54 million visitors each year. Access to the mall is provided via Doha Street, rebuilt as a double-decker road in April 2009. Twice delayed, Dubai Mall opened on 4 November 2008, with about 1000 retailers, marking the world's second largest-ever mall opening in retail history behind West Edmonton Mall. However, it does not have the most gross leasable space, and is surpassed in that category by nineteen malls including the New South China Mall, which is the world's second-largest, Golden Resources Mall, SM City North Edsa, and SM Mall of Asia.

The Dubai Mall recorded 61,000 tickets sold for the Dubai Aquarium and Discovery Centre in the first five days, following its opening. The Dubai Mall hosted over 37 million visitors in 2009, and attracts more than 750,000 visitors every week. In 2010, it hosted 47 million visitors, and saw an increase in foot traffic by about 27 percent over 2009, despite the economic crisis (a consequence of real estate bubble burst). In 2012, Dubai Mall continued to hold the title of the world's most-visited shopping and leisure destination, and attracted more than 65 million visitors, an increase of more than 20 percent compared to the 54 million recorded in 2011. It attracted more visitors than New York City which welcomed over 52 million visitors in 2012, and Los Angeles which had 41 million visitors. The number also surpasses visitor arrivals to all landmark leisure destinations and theme parks in the world including Times Square (39.2 million), Central Park (38 million), and Niagara Falls (22.5 million).

At over 13 million square feet (equivalent in size to more than 50 football fields), The Dubai Mall has a total internal floor area of 5.9 million square feet (55 ha) and leasable space of 3.77 million square feet (35 ha), about the same as the West Edmonton Mall. It also has a 250-room luxury hotel, 22 cinema screens plus 120 restaurants and cafes. The Mall has over 14,000 parking spaces across 3 car parks, with valet services and a car locator ticketing system. The mall has won five awards – two awards at the Retail Future Project Awards at Mapic, Cannes, in 2004, for ''Best Retail Development Scheme (Large)'' and ''Best Use of Lighting in a Retail Environment'' and the Dubai Mall brochure collected three awards at the Summit Creative Awards 2005 in Portland, Oregon – the Gold award for: ''Best Art Direction / Graphic Design'', Silver award for ''Best 4-colour B2B Brochure'', and a ''Judges Special Recognition award''. The Mall also features the Olympic-sized Dubai Ice Rink for recreational skating and to watch the Emirates Ice Hockey League games and the Emirates A380 Experience, an A380 aircraft simulator and Experience will let you control the world's largest passenger aircraft around city scenes and famous landmarks. You can take off, land, ascend and do whatever you like with the help of a trainer. 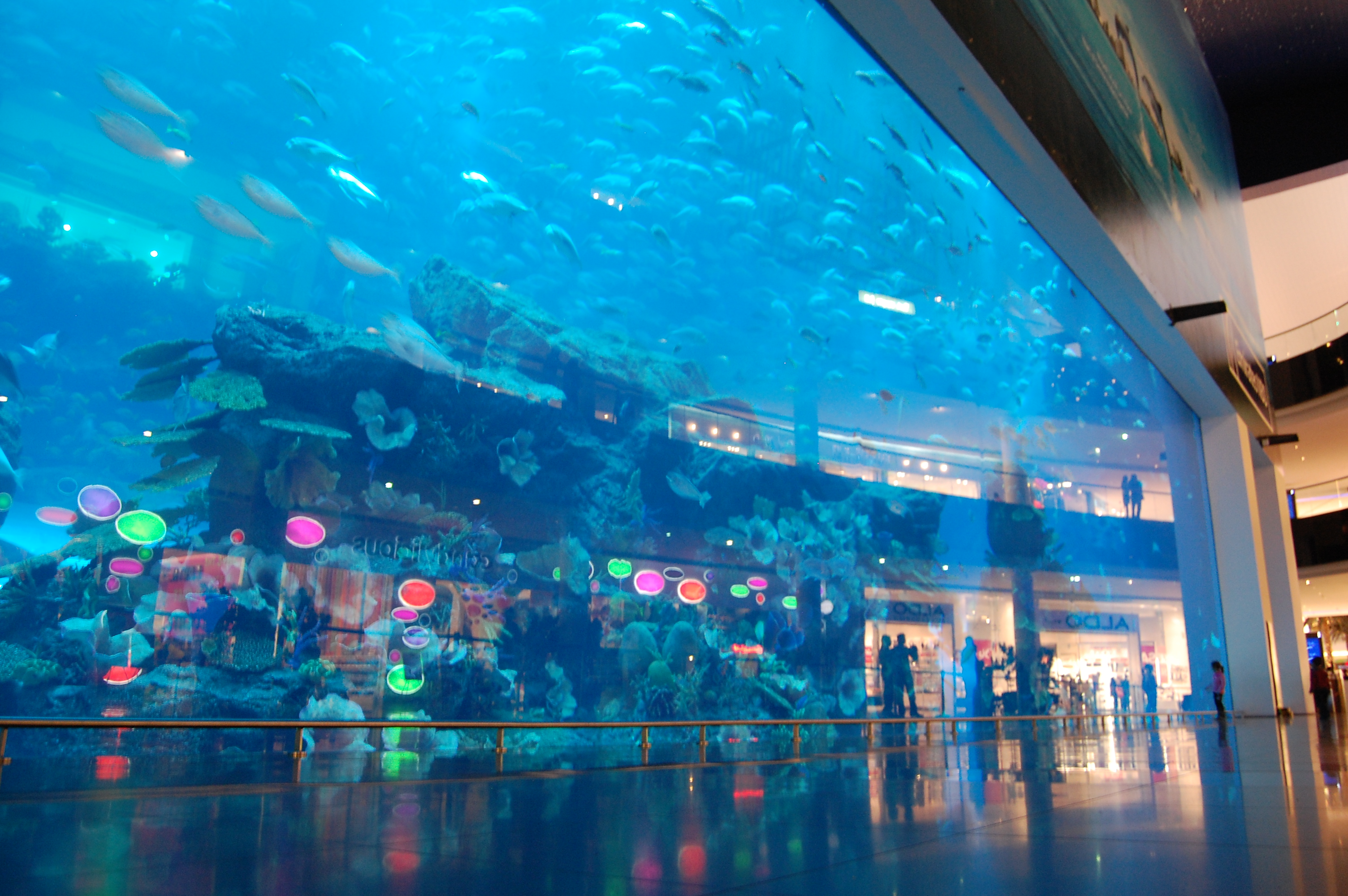 VR Park Dubai is an amusement park that formerly operated as Sega Republic. The 76,000 sq ft indoor park features 15 rides and an array of amusement games, including motion simulators, classic carnival games, skill games, and a wide array of redemption games. Recent additions to Sega Republic rides include Xyclone, Robotnik and Rope Rush, a form of an obstacle course. The park includes ‘Lazeraze’, a laser maze, as well as ‘Racer’ Bumper Cars. It also features a "soft play area" for smaller children. The theme park closed on June 1, 2017, after the license to the Sega theme expired. It later reopened in February 2018 as a theme park dedicated to virtual reality under the name of VR Park Dubai.

Reel Cinemas is a 22-screen cinema, also managed by Emaar Entertainment, in The Dubai Mall. One of the largest theaters in the region, the megaplex features four cinema suites and 17 commercial halls, including the first THX-certified cinema in Dubai.

The Dubai Mall is home to one of the newest Rainforest Cafe locations. Having opened in 2009, it faces the aquarium and is made to emulate tropical ruins with moving ruins and light shows, which are only found at this location. 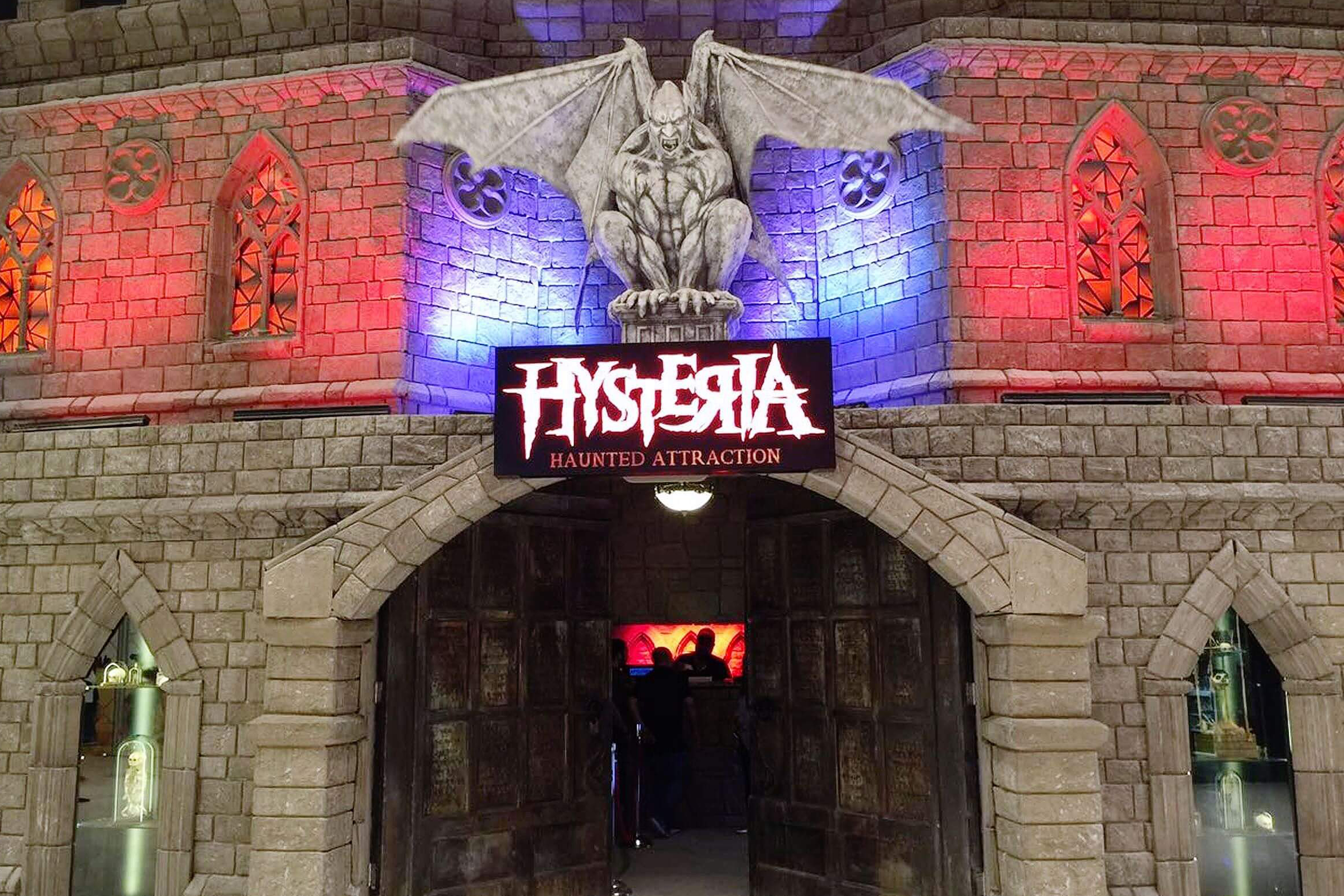 Hysteria is a haunted house. It is decorated with special effects, fog lights and strobe lights. The story of Hysteria revolves around a family whose child mysteriously disappeared. They believe that the guest knows where their child is, so they attempt to kidnap the guest or guests and subject them to a terrifying experience.

Dubai Dino is genuine fossil of Diplodocus, a large, long-necked dinosaur. The total measurement of the Dino is over 7 meters in height, and 24 meters in length.

The Dubai Mall's Grand Atrium is home to a replica of the Dubai Creek Tower, which is currently under construction. The model gives a 3D rendition of the completed tower's architecture and grandeur.

The Mall was built by a joint venture of Dutco Balfour Beatty, Al Ghandi/CCC and Turner Construction for Emaar Properties and was scheduled to be completed in 2006, claiming to be the size of 50 "international-sized football (soccer) pitches". The mall opened in 2008. Most of the workers who constructed the mall were Indian, Pakistani, Bangladeshi and Sri Lankan guest workers.

In December 2012, Emaar Properties announced the completion of the Metro Link, an 820 m long elevated, air-conditioned footbridge that connects the Burj Khalifa/Dubai Mall Metro station to the mall.

In June 2013, The Dubai Mall commenced phase one of its expansion plan by increasing the total retail floor area by 1 million sq. ft. so as to accommodate more visitors. The project was completed in 2018.

* On 25 February 2010 the aquarium (which holds sharks) sprung a leak which led many shops to temporarily close down and forced shoppers to evacuate the mall immediately. It reopened the following day. * In March 2015, more than a hundred foreign labourers protested in front of Dubai Mall due to overtime wages not being paid, causing disruption to traffic in the area. The situation came under control within an hour by the police. * On 31 December 2015 the mall was evacuated because of a major fire at The Address Hotel, which is adjacent to the mall's compound. * In December 2016, British TV presenter Richard Hammond drove a tank into the Dubai Mall as part of a stunt for The Grand Tour. * On 24 April 2017 a power outage occurred, causing the mall to go into a blackout for 90 minutes. No other nearby areas were affected. * In November 2019, large areas of the mall were flooded.

The Dubai Mall was featured in the documentary show called Megastructures that aired on the National Geographic Channel The mall was also featured in the BBC One programme, ''The Apprentice'' (UK series nine) and ''Week 5: Dubai Discount buying'', where the candidates had to purchase items for the least amount of prices by utilising their negotiation skills.