A double-decker bus is a bus that has two storeys or decks. Double-decker buses are used for mass transport in the United Kingdom, Europe, Asia and many former European possessions, the best-known example being the red London bus, namely the AEC Routemaster. Early double-deckers put the driver in a separate cab. Passenger access was via an open platform at the rear, and a bus conductor would collect fares. Modern double-deckers have a main entrance door at the front, and the driver takes fares, thus halving the number of bus workers aboard, but slowing the boarding process. The rear open platform, popular with passengers, was abandoned for safety reasons, as there was a risk of passengers falling when running and jumping onto the bus. Double-deckers are primarily for commuter transport but open-top models are used as sight-seeing buses for tourists. William Gladstone, speaking of London's double-deck horse-drawn omnibuses, once observed that "...the best way to see London is from the top of a bus".

Enviro400 in England]] The first commercial horse-drawn double-decker omnibuses were introduced in England in 1847 by William Bridges Adams|Adams & Co. of Fairfield, Bow, then improved upon by John Greenwood, who introduced a new double-decker in 1852. Double-decker buses are in common use throughout the United Kingdom, and have been favoured over articulated buses by many operators because of the shorter length of double-deckers and larger amount of seating capacity; they also may be safer to operate through the narrow streets and tight corners common in the UK. The majority of double-decker buses in the UK are between and long, the latter being more common since the mid-1990s, though there are three-axle models in service with some operators. Double-decker coaches in the UK have traditionally been in length, though many newer models are about . The maximum permissible length of a rigid double-decker bus and coach in the UK is with 3 axles, and metres with two. However, the total maximum dimensions, including trailer or articulated section, in normal circumstances are; Coaches are normally built to high, while 'highbridge' buses are normally about taller. Articulated double-deckers are also allowed at a maximum length of . In 1941, Miss Phyllis Thompson became the first woman licensed to drive a double-decker vehicle in the United Kingdom. She drove for the bus company Felix Bus Services, then at Hatfield near Doncaster. The red double-decker buses in London have become a national symbol of England. The majority of buses in London are double-deckers. A particular example was the AEC Routemaster bus, which had been a staple of the public transport network in London for nearly half a century following its introduction in 1956. Because of cited difficulties accommodating disabled passengers, the last remaining Routemasters in use finally retired from general service in 2005. Transport for London has continued to keep these vintage buses in operation on heritage route 15H, there was formerly a second heritage route (9H) but this ceased operation in 2014 due to low patronage and increased operation costs. In 2007, a hybrid-powered double-decker entered service on London Buses route 141. By late 2008, more hybrid double-deckers from three manufacturers entered service in London. A New Routemaster was developed that year, and entered service on 20 February 2012. In October 2015, London added five all-electric double-decker buses - the world's first - made by Chinese firm BYD.

Bus Vannin operates several double-deckers on routes all across the island.

In the Republic of Ireland, nearly all of the buses operated in and around Greater Dublin by Dublin Bus are double-deckers. There are 1,000 double-decker buses (second after London) in the company's fleet of 1,008 (October 2019). Bus Éireann also utilises double-decker buses on some of its commuter routes, such as the Dublin to Dundalk service. Double-deckers are also common on some of the company's suburban routes in Cork city. More luxurious Double-Deckers are used on Intercity Routes like the XI Dublin-Belfast Route or X3/X4 Dublin-Derry route.

Double decker buses were in use on city services in Vienna between 1960 and 1991. They are used on services between Vienna and its airport, and also operated by Ötztaler Verkehrsgesellschaft (ÖVG) under contract to ÖBB-Postbus on service 4420 between Innsbruck and Lienz.

Since 2020, two Scania UNVI Urbis DD CNG cars have been running on public transport lines in Ostrava. During working days on lines 20 and 78. Over the weekend and holidays during the summer season on line 88.

Since 1970, various operators of Copenhagen city transport were using double-deckers—originally Leyland, in the 1980s–1990s MAN and in the 2000s Volvo, derivates of model B7.

Double-decker buses are relatively rare in Finland, but there are known to be at least four Routemasters in Finland: one in Helsinki, one in Heinola, one in summer tourist charter in Espoo and one in summer tourist traffic in Kuopio. In the autumn of 2019, Public Transport of Turku, also known as ''Föli'', was the first city to officially incorporate double-decker buses into local traffic.

The first French double-decker bus was brought into service in Paris in 1853; it was a horse-drawn omnibus. The upper floor was cheaper and often uncovered. The first double-decker motor bus in Paris, the Schneider Brillié P2, appeared in 1906. It was designed to carry more passengers and to replace the horse-drawn double-decker omnibus. Like trams and omnibuses, double-decker motor buses included two classes of travel: first class inside the car and second class outdoors on top. But this type of vehicle was withdrawn in 1911 because one of them overturned at place de l'Étoile; following this incident the P2s lost their upper deck and were renamed as P3s. It was not until 1966 that the RATP retried double-deckers on two lines in Paris. A prototype built by Berliet (type E-PCMR), was put into service in 1966, with an order being placed for 25 vehicles. The first production car was commissioned on 19 June 1968 on line 94, Gare Montparnasse - Levallois. On 17 February 1969, line 53, Opera - Porte d'Asnieres was in turn equipped with this model. But traffic problems caused RATP to definitively abandon this vehicle in 1977, because this type of bus is poorly suited to the structure of the Paris network, the stops being too close to each other which prevented people from going upstairs. Hence, there are no Parisian mass transit lines using double-decker buses. SITAC operates a service 5 between Calais and Sangatte using a double decker bus.

In Germany, double-decker buses in Berlin are operated by Berliner Verkehrsbetriebe (BVG). The fleet of double-decker buses in Berlin fell from 1,000 in 1992 to 450 in 2002. The models in operation in 2004 were long and held around 95 passengers. The replacements, which are supplied by Neoman Bus, are longer. The new buses are able to hold 128 passengers.

During the 1960s and 1970s major cities like Turin, Milan, Rome, Florence, Verona, Bologna, Rimini, Naples, Bari and Palermo adopted Fiat double decker buses. The most common model was the Fiat 412 Aerfer, and in 1961 it was replaced by Fiat 413 Viberti Monotral CV61.

Liemobil operates four double decker MAN A39 buses on service 11 between Sargans, Switzerland and Feldkirch, Vorarlberg, Austria and on other services 12, 13 and 14 in the country.

It is only very recently that double-decker buses have started to be used in the Netherlands. On 10 December 2017 Connexxion put 18 three-axle double deckers into service o
route 346
between Haarlem and Amsterdam Zuid, a heavily used commuter route not served by rail. They are Futura FDD2s built by VDL Bus & Coach in Valkenswaard, are 14.1 metres long, and carry 86 seated passengers. Their introduction was not without problems since their route initially had to be diverted to avoid passing under a dangerously low tram overhead wire near the VU Medical Centre stop. Also in December 2017, Qbuzz introduced five double-deckers on its route 300 between Groningen and Emmen. These are Van Hool TDX27 Astromegas, also 14.1 metres long and carrying 85 passengers.

The Macedonian government bought 217 Yutong City Master double-decker city buses for local transport in Skopje, the capital. The first shipment of 68 custom-made buses arrived in Skopje in 2011 from China's Zhengzhou Yutong factory. The buses were put into operation on 8 September 2011, coinciding with the day of Macedonian independence. This model of bus has capacity for 80 passengers.

Double-decker buses in Portugal were introduced during the 1950s when buses in general started to be driven in the main cities of the country, such as Lisbon, Porto, Coimbra and Setúbal. The type of buses were built by AEC (Regent) and later, vehicles produced by Daimler (Fleetline) and Leyland (Atlantean) with Portuguese bodywork or original. there was also one Leyland Olympian as a demonstrational bus for Lisbon. In Porto, there were double-decker trolleybuses, produced by Lancia and with Dalfa bodywork, putted in circulation in the middle 1960s until the middle 1990s. Double-decker buses were not a common vehicle for normal service, but for sightseeing purposes, most commonly Portuguese produced vehicles, including rebodies from regular service buses (for example, the Volvo B10R from Carristur), as well as ones from former companies, such as the MAN SD202 from BVG Berlin, many of them still in circulation. This situation with no double-decker buses on regular service lasted until 2011, when STCP acquired fifteen double-decker buses, with the model MAN A39 (same ones as in Berlin). They were presented as an event made by the company, named "Duplex Tour" at 26 February 2011 and put them into normal service on the 28th of the same month and year. These buses can be found normally on bus line 500. 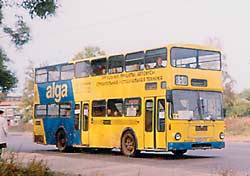 Double-decker buses were introduced in 2014 in Bilbao by the city bus operator Bilbobus. They are not the first double deck vehicles in the city as ex-London Transport Q1 trolleybuses were sold to Bilbao after the end of London trolleybus operations in 1962 and were operated until the system's closure in 1978. Initially, six vehicles are operating on Bilbobus route 56. They have a capacity of 132 passengers - 80 seated and fifty standing.