Moscow Domodedovo Airport ( rus|links=no|Домодедово|p=dəmɐˈdʲɛdəvə), formally "Domodedovo Mikhail Lomonosov International Airport" is an international airport located in Domodedovo, Moscow Oblast, Russia, south-southeast from the centre of Moscow. Domodedovo is one of the four major Moscow airports, one of the largest airports in Russia, and the eighth-busiest airport in Europe. In 2017, it served 30,700,000 passengers, an increase of 7.6% compared to 2016, making it the second busiest airport in Russia after Sheremetyevo International Airport. Following a 2019 naming contest and presidential decree, it became named after Russian scientist Mikhail Lomonosov.

The airport is named after the town of Domodedovo, on the territory of which it is located. Survey work on the construction of the new Capital Airport began in 1948, after a decision by the Politburo. It was then described as special "facility №306". In 1951, preparatory work on construction began: cutting firebreaks, and construction of access roads, including roads from Paveletskaya. A 1954 Resolution of the Council of Ministers of 13 November approved the proposal of the Main Directorate of the Civil Air Fleet under the Council of Ministers of the USSR on the construction of the second airport of the Moscow civil air fleet near the village Elgazin Podolsky (now Domodedovo) Moscow Oblast. In 1958, a decree of the USSR Council of Ministers enabled completion of construction of the first stage of the airport in 1962. In 1962, an Order of the Head of Main Directorate of Civil Aviation, issued on 7 April No. 200 ("On the organization of the Moscow Domodedovo airport") ordered "organize as part of the Moscow Transport Aviation Management Directorate the new airport, and continue to call it the Moscow Domodedovo Airport". Therefore, 7 April 1962 is considered the official birthday of the airport. By the end of 1962, after the official approbation, the airport began flights by postal and cargo planes. 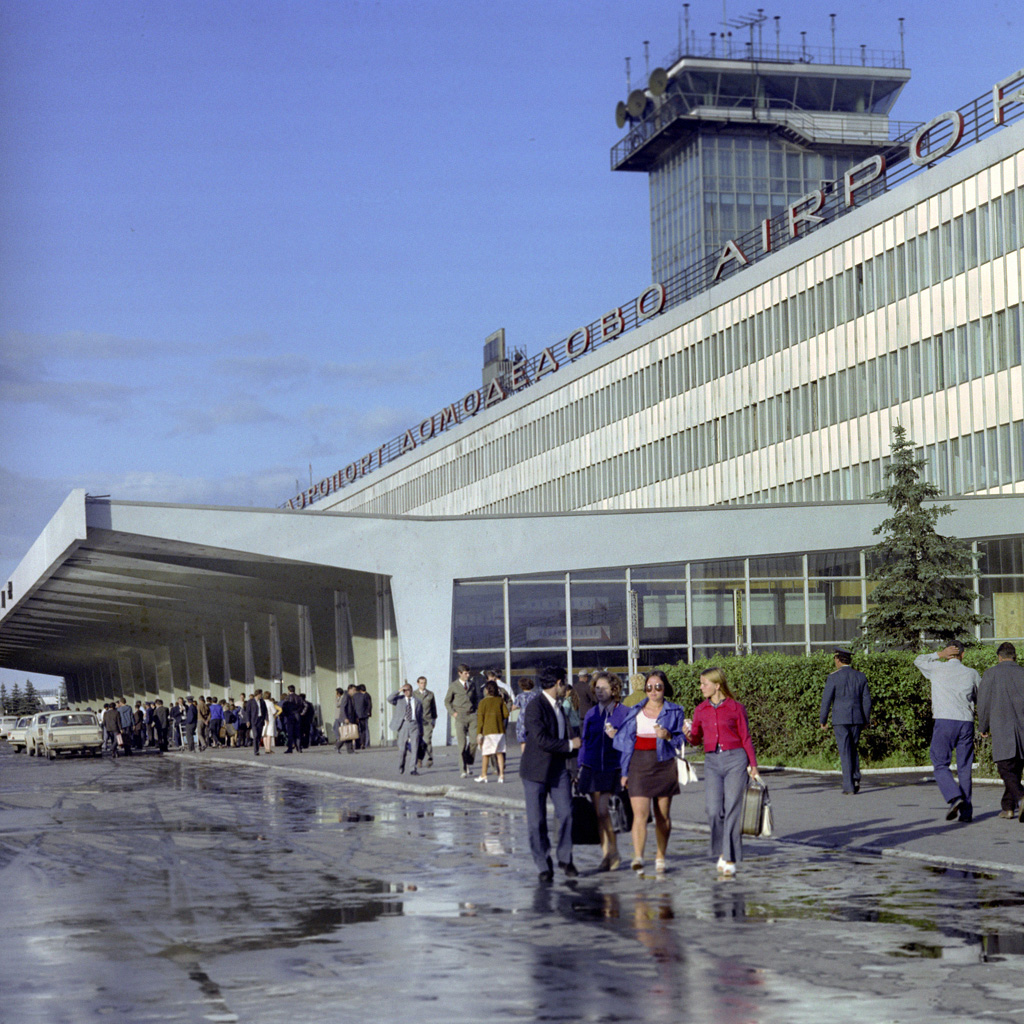 Services from Domodedovo began in March 1964 with a flight to Sverdlovsk using a Tupolev 104. The airport, intended to handle the growth of long-distance domestic traffic in the Soviet Union, was officially opened in May 1965. A second runway, parallel to the existing one, was put into service 18 months after the opening of the airport. On 26 December 1975, Domodedovo Airport was selected for the inaugural flight of the Tupolev Tu-144 to Alma Ata. In 1993–1994, East Line Group, founded by Urals entrepreneurs Anton Bakov and Dmitry Kamenschik, who built capital in the early 1990s on hauling cargo from Asian countries to Russia, invested in several facilities at Domodedovo, including a new customs terminal and catering services. In late 1996, Kamenschik-led East Line Group privatized the terminal facilities of Domodedovo Airport and formed JSC 'International Airport Domodedovo' and several other commercial entities controlling the airfield operations at the airport. Since 1998, the runways, air traffic control, and communication facilities are formally on a lease to the subsidiary of East Line Group. Later, in 2005 and 2008, the legality of these deals with East Line Group was contested by the Russian Rosimushchestvo government agency supervising the state property. East Line's strategic goal to stabilize the airport's future and to establish Domodedovo as an important international and multi-modal transportation hub was gradually achieved throughout the 2000s (decade). In the 2000s (decade), East Line Group began to heavily invest in reconstruction and modernization of the outdated airport facilities. In 2000, as a result of reconstruction, the capacity of the airport complex has reached 6,000 passengers per hour: MVL – 2800 passengers per hour, DAL – 3,200 passengers per hour. As a result of this work Domodedovo airport terminal was the first in Russia to successfully pass the certification to ISO 9001:2000. In 2003, the authoritative British magazine Airline Business has recognized the dynamics of growth in passenger traffic of Domodedovo highest among the 150 largest airports in the world. In 2004, the air harbor is among the hundred of the leading airports in the world, and by 2005 became the leader in terms of passenger traffic in the Moscow aviation hub and holds the palm for over 10 years. By 2009, the terminal floor space was expanded to 135,000 sq. meters (1,453,000 ft2) from 70,000 sq. meters (753,000 ft2) in 2004. The renovated terminal and airport facilities allowed the owners of the airport to attract British Airways, China Eastern Airlines, Lufthansa, Royal Air Maroc, Japan Airlines, Austrian Airlines, and Vietnam Airlines who moved their flights from another major international Moscow airport, Sheremetyevo Airport, to Domodedovo. Domodedovo topped Sheremetyevo Airport in terms of passenger traffic becoming the busiest airport in Russia. By 2010, the traffic at Domodedovo spiked to over 22 million passengers per year from 2.8 million in 2000. Domodedovo is Russia's first airport to have parallel runways operating simultaneously. Since the air traffic control tower was redeveloped in 2003, Domodedovo can control over 70 takeoffs and landings per hour. By late in the 1st decade of the 21st century, the airport had five business lounges set up by individual airlines. 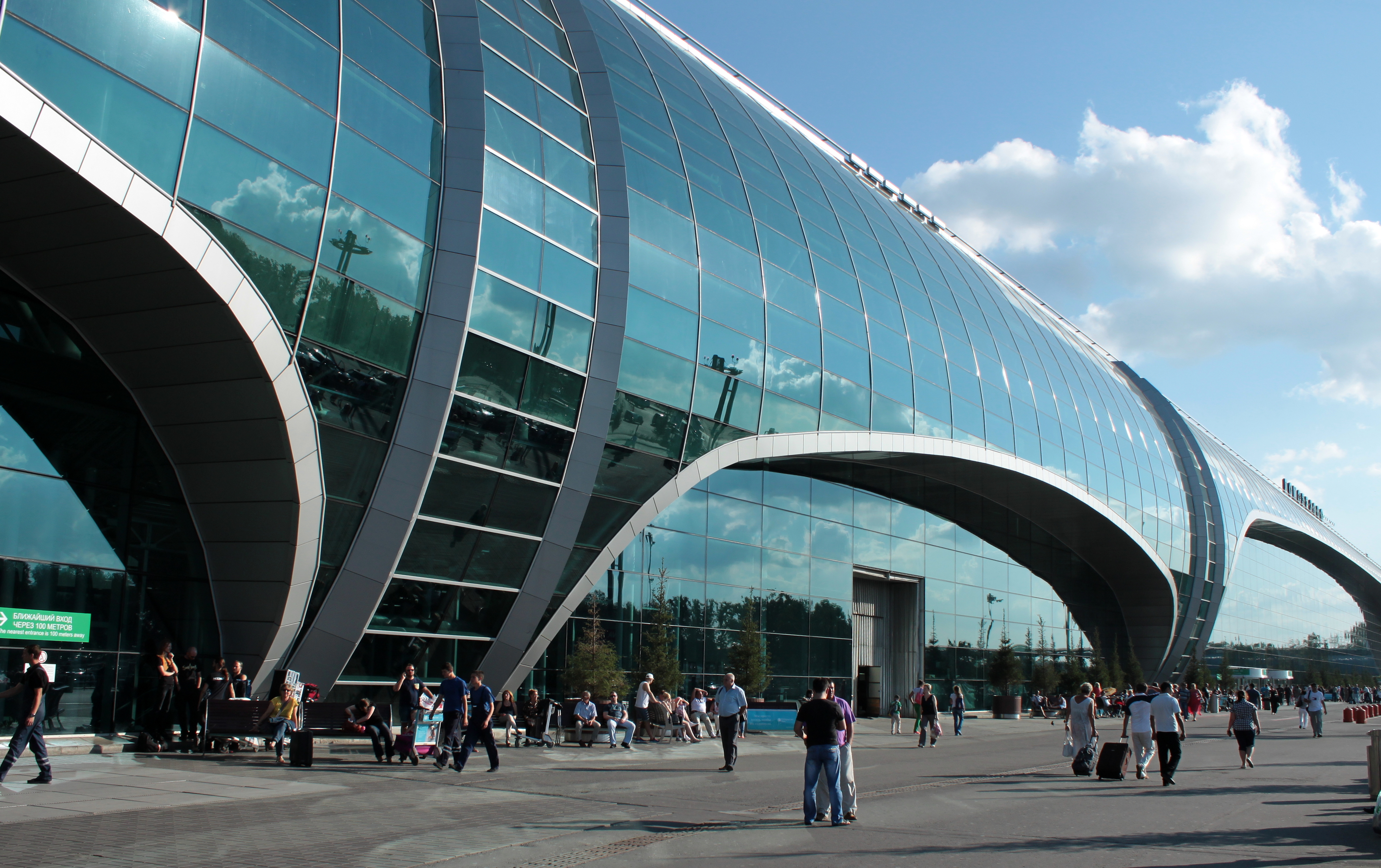 In 2003, the airport began an expansion program designed to obtain approval for wide-body aircraft operations. The runway, taxiways, and parking areas were enlarged and strengthened. In March 2009, it was announced that the approval had been granted, making Domodedovo Airport the first in Russia approved for new large aircraft (NLA) operations such as the Airbus A380. The approval signifies that its operations areas comply with size and strength requirements of ICAO Category F standards. The airport has ILS category III A status. Domodedovo Airport has been the focus of two terrorist-related incidents. In 2004, Muslim suicide bombers managed to pass airport security, board two passenger planes, and carry out the bombings after departure from Domodedovo. Despite the heightened security measures taken after this incident, another suicide bomber attack occurred on 24 January 2011, when an Islamist militant entered the terminal building and detonated a bomb in the arrival hall. As a result, mandatory screening and pat-down practices have been introduced at the airport terminal entrances. 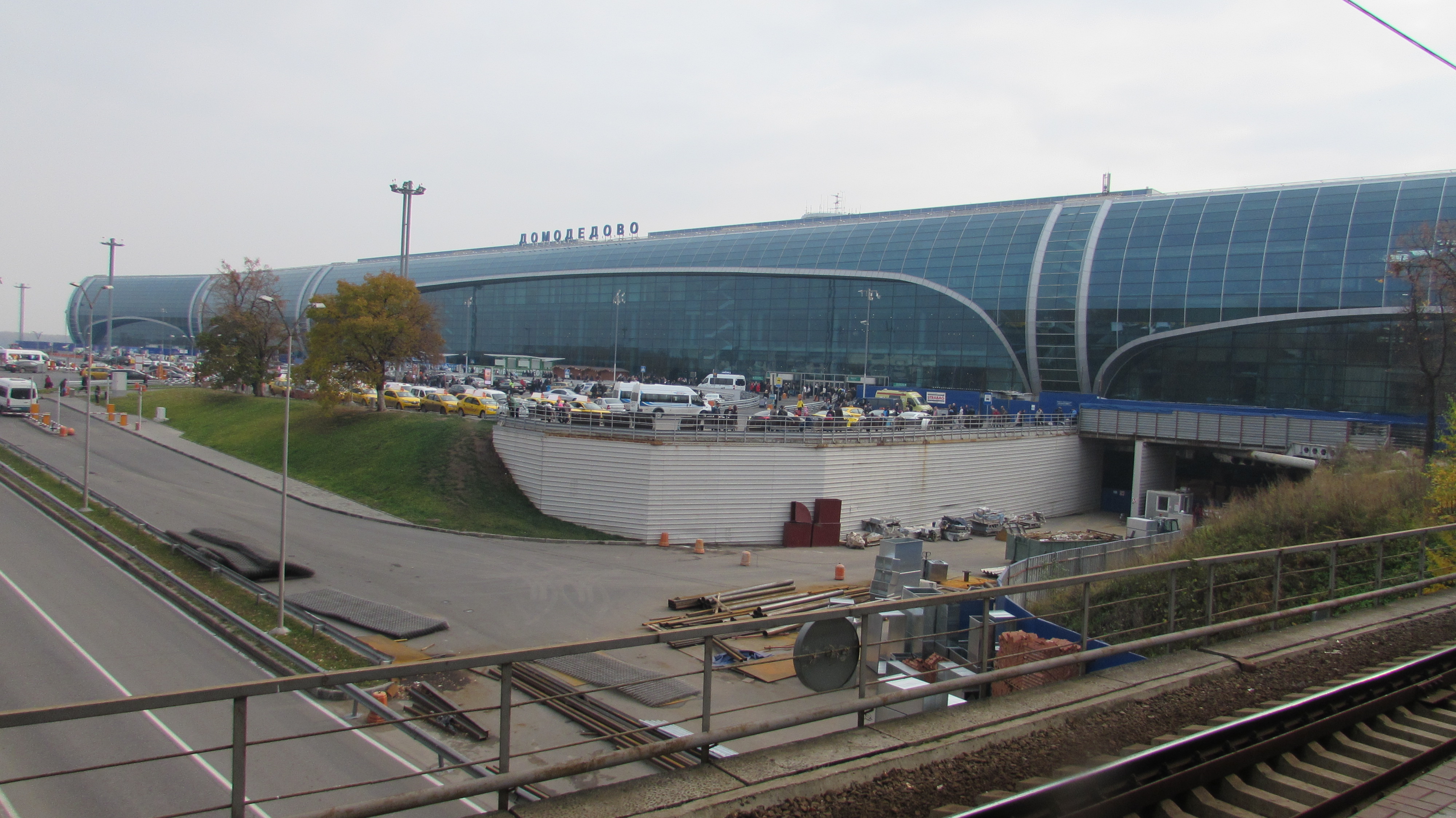 As of January 2016, new concourse extensions adjacent to the current terminal building are under construction. The construction is projected to increase the overall size of the passenger terminal to 225,000 m2. The extensions are opened in stages in 2012–2014. In May 2015, the new extension of terminal A (the main building) was finished, which contains new offices, an airport lounge and new passport control desks, and it differs by design compared to other terminal parts. All concourses will remain connected and plan to increase the efficiency of the airport operations and passenger connections by using ICAO and IATA transfer technologies. A new parking space was also finished, which can accommodate over 1500 cars

The first stage of Terminal 2 is being built as the part of the 2018 FIFA World Cup program, for international flights. When completed, the international flights operated at concourse B will all be shifted to the new segment, which will become the second segment of a new passenger terminal and will be twice the size of Terminal 5 at London Heathrow – the equivalent of 61 football fields. New premises area of 235,000 sq. meters (2,529,000 ft1) (segment T2) will be mounted to the left wing of the existing terminal. There will be about 100 check-in counters, 40 self check-in kiosk, as well as special jetways for the world's largest passenger aircraft Airbus A380. As a result, the total area of the passenger terminal (including the expansion of the current main segment T1) will increase by more than double to nearly 500,000 square meters. It was designed by British company RMJM and uses the under-the-roof concept, which means that passengers from all flights will be serviced within a single terminal. One of Europe's largest air hubs – Amsterdam's Schiphol Airport – operates under this concept. The construction was initially planned to be finished by March 2018, however, due to immediate change of the contractor, the construction delayed, significantly. During FIFA-2018, in new terminal worked only specific arrival and departure zones and they worked only for the football fans, travelling with the fan-passports. The terminal will fully finish its construction with all remaining parts by first quarter of 2020.

Domodedovo Airport has one terminal building comprising two separate concourses for domestic (and some former Soviet republic countries) and international flights. It has 22 jetways altogether. When Terminal 2 is completed, the number of jet bridges will rise to 33.

The following airlines operate regular scheduled and charter services to and from Domodedovo:

The airport has a railway station with service to the Paveletsky Rail Terminal in central Moscow. The rail connection, which was completed in 2002, provides Aeroexpress trains (takes 45 min; coach class costs 470 rubles, business class costs 1,000 rubles), with two stops at Paveletsky Rail Terminal and Verkhnie Kotly railway station.
Regular suburban commuter trains in the Paveletsky suburban railway line take 65 to 70 min and cost 99 rubles, but are infrequent during the day.

Connection to Moscow is served by bus 308 (ample luggage room) and commercial marshrutka minivans (more frequent departures): to Domodedovskaya of Moscow Metro Zamoskvoretskaya Line (#2). The fare is 150 rubles (eq. to 2 US$), travel time around 45 minutes. Local buses 11, 26, 30 link to nearby towns and connect to the railway station in the Paveletsky suburban railway line at Domodedovo municipality. Bus 999 is South-East bound and connects the airport to Bronnitsy, Kolomna and Ryazan.

The airport has several long and short term parking lots. The terminal itself is accessed from the junction of Moscow Ring Road and Kashirskoye Highway via a designated 22 kilometer (14 mi) four-lane freeway. Licensed taxi, limo services, and car rental (Hertz, Avis, and Sixt) providers are available at the counters of the arrival hall. Uber, Gett, Yandex.Taxi offer flat-rate trips to anywhere in Moscow, booked via mobile app.

*On 5 December 1999, a cargo variant of the Ilyushin Il-114 crashed during a test flight at Domodedovo, killing five and injuring two. *On 24 August 2004, Volga-AviaExpress Flight 1353, and Siberia Airlines Flight 1047 were simultaneously bombed, killing 44 on the first, and 46 on the latter, for a total of 90 people killed in total. *On 22 March 2010, a Tu-204 operating Aviastar-TU Flight 1906, a ferry flight without passengers and with 8 crew from Hurghada, Egypt, crashed in a forest 2 kilometers (1.2 mi) away from the airport while trying to land in fog. There were no fatalities and the crew escaped the crashed aircraft on their own, but four of them were seriously injured. *On 4 December 2010, South East Airlines Flight 372 made an emergency landing at Domodedovo, killing two people and injuring 56. *On 24 January 2011, the Domodedovo International Airport was subject to a suicide bombing which killed 37 people and injured 173. A Chechen jihadist group, the Caucasus Emirate was found to be responsible. *On 11 February 2018, Saratov Airlines Flight 703, an Antonov 148 crashed shortly after takeoff killing all 71 people on board.