Click Here for Items Related To - Demographics of Belize 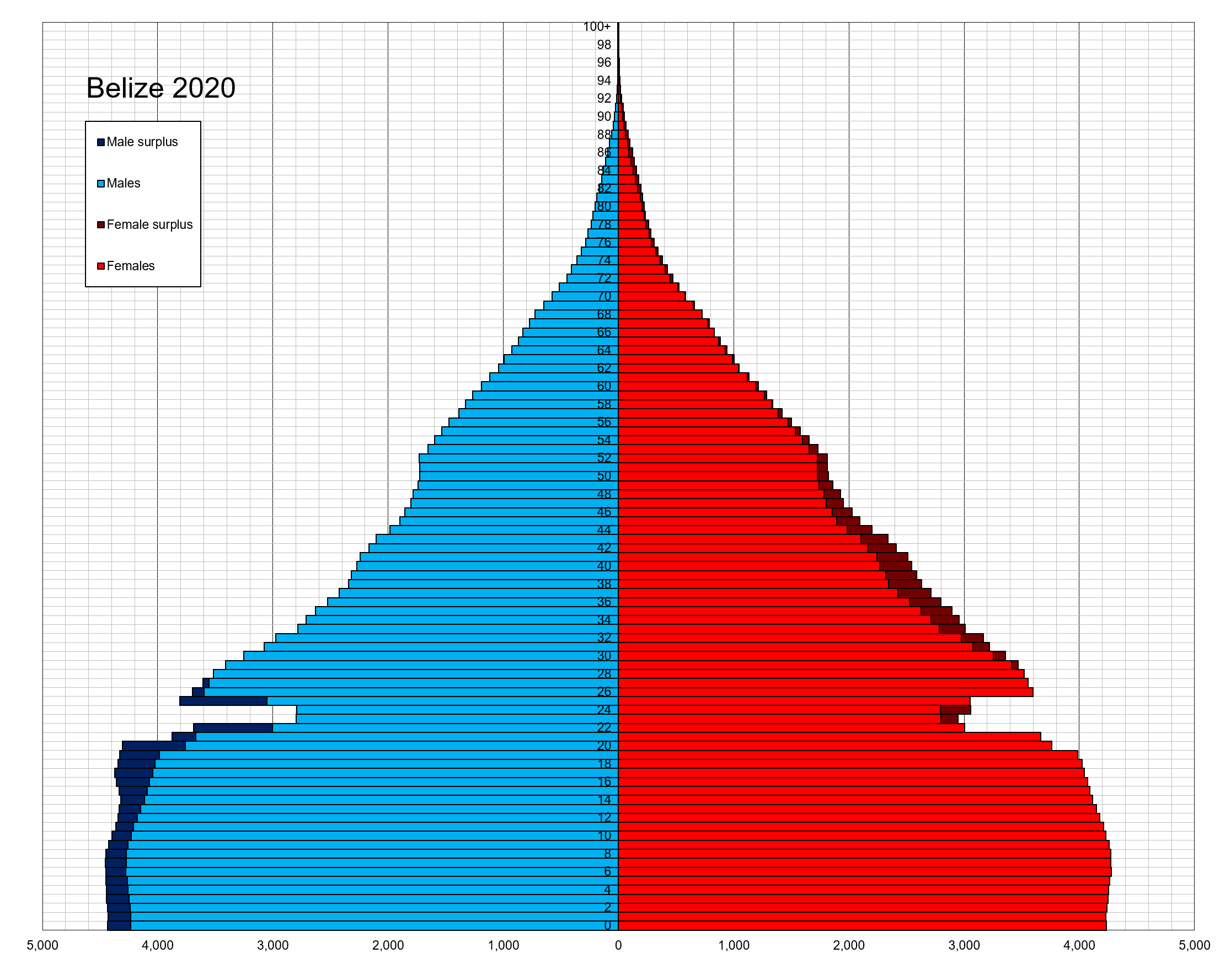 This article is about the demographic features of the population of Belize, including population density, ethnicity, education level, health of the populace, economic status, religious affiliations and other aspects of the population. thumb|400px|Belize's population, 1961-2003. Belize is the most sparsely populated nation in Central America. It is larger than El Salvador. Slightly more than half of the people live in rural areas. About one-fourth live in Belize City, the principal port, commercial centre, and former capital. About 80% of the population are Christian. Most Belizeans are of multiracial descent. About 52.9% of the population is of mixed Indigenous (mostly Maya) and European descent (Mestizo), 24.9% are Kriols, about 10.6% are Maya, and about 6.1% are Afro-Amerindian (Garifuna). The remaining population includes European, East Indian, Chinese, Middle Eastern, and North American groups. In the case of Europeans, most are descendants of Spanish and British colonial settlers, whether pure-blooded or mixed with each other. Most Spanish left the nation just after it was taken by the British colonists who, in the same way, left after independence. Dutch and German Mennonites settled in Belize, mostly in isolated areas.

Most Belizeans are of multiracial descent. About 52.9% are Mestizo, 25.9% Creole, 11.3% Maya, 6.1.% Garifuna, 3.9% East Indian, 3.6% Mennonites, 1.2% other White, 1% Asian, 1.2% Other and 0.3% Unknown. Most Europeans are descendants of Spanish and British colonial settlers, whether pure-blooded or mixed with each other. Most Spanish left the nation just after it was taken by the British colonists who, in the same way, left after independence. Beginning in 1958, German Mennonites of "Russian" Mennonite and Pennsylvania Dutch heritage settled in Belize, mostly in isolated areas.

Because Belize's original Maya peoples were decimated by disease and wars or fled to Mexico and Guatemala, most of the country's Maya today are descended from other groups. The current Maya population consists mainly of three language groups. The Yucatec fled to Belize in the late 1840s to escape the Caste War in Yucatán, Mexico. Their descendants live in the Orange Walk and Corozal districts, which border on Mexico. Before the massive migration of Yucatec Maya from Mexico to Belize, a local Yucatec Maya group named the Iciache Maya already inhabited the land. Today most Yucatec Maya work in the sugar cane industry. In the 1870s-1880s, many Q'eqchi' fled from Alta Verapaz, Guatemala, where their communal land were seizured for coffee plantations, where they were forced into service. They settled villages in the Toledo district. Living near rivers and streams, they are primarily farmers, though many younger people now work in tourism, and on shrimp, banana and citrus plantations. The Mopans originated in Belize, but most were driven out to Guatemala after the British displaced Spanish in a struggle that took most of the 18th century. They returned to Belize in 1886, running from enslavement and taxation in Petén. The Cayo district and San Antonio in the Toledo district are their homes now. Q'eqchi' and Mopan have intermarried, though the two languages remain distinct and mutually unintelligible. Mopan and Yucatec are mutually intelligible. Birth Rate by Ethnic Groups (2000 Census)

English is the only official language of Belize, a relic of past British colonization. It is the main language used in government and education. Although only 5.6% of the population speaks it as the main language at home, 54% can speak it very well, and another 26% can speak some English. 37% of Belizeans consider their primary language to be Kriol, an English-based creole of words and syntax from various African languages (namely Akan, Igbo, and Twi), and other languages (Miskito, Caliche). It is also a second or third language for another 40% of the multilingual country. Kriol shares similarities with many Caribbean English Creoles as far as phonology and pronunciations are concerned. Also, many of its words and structures are both lexically and phonologically similar to English, its superstrate language. Because it is English-based, all Kriol speakers can understand English. A number of linguists classify Belizean Kriol as a separate language, while others consider it to be a dialect of English. Spanish is the mother tongue of Mestizo and Central American refugees and is commonly spoken at home by 43% of the population. Maya dialects such as Q'eqchi', Mopan and Yucatec are spoken. Garifuna (which is Arawakan/Maipurean based, with elements of the Carib language, French, and Spanish) and the Plautdietsch and Pennsylvania German dialects of the Mennonites are spoken as well. Literacy currently stands at nearly 80%. In 2001, UNESCO declared the Garifuna language, dance, and music a "Masterpiece of the Oral and Intangible Heritage of Humanity". English is the primary language of public education, with Spanish taught in primary and secondary school as well. Bilingualism is highly encouraged, and therefore, very common.

According to the 2010 census Catholics constitute 40.0% of the population of Belize, down from 49.6% in 2000 and 57.7% in 1991; Protestants constitute 31.7% of the population, with a slight growth in percentage for some groups since 2000 (8.5% Pentecostal; 5.5% Adventist; 4.6% Anglican; 3.8% Mennonite; 3.6% Baptist; 2.9% Methodist; 2.8% Nazarene); Jehovah's Witnesses are 1.7% of the population. 10.2% of Belizeans follow other religions (with a growth in percentage since 2000); amongst these there are followers of the indigenous Maya religion, Garifuna religion, Obeah and Myalism, and minorities of Mormons, Hindus, Buddhists, Muslims, Baháʼís, Rastafarians and other. The Mennonites, of German descent, live mostly in the rural districts of Cayo and Orange Walk. 15.6% of the Belizean population do not adhere to any religion, up from 9.4% in 2000. Belizean Roman Catholic churches belong to the Diocese of Belize City-Belmopan; Anglican churches belong to the Diocese of Belize, part of the Church in the Province of the West Indies. Hinduism is followed by most Indian immigrants, while Islam is common among Middle Eastern immigrants and has gained a following among some Kriols. Catholics frequently visit the country for special gospel revivals. The Greek Orthodox Church has a presence in Santa Elena. The Constitution of Belize provides for freedom of religion, and other laws and policies contribute to the generally free practice of religion. The Government at all levels protects this right in full against abuse, either by governmental or private actors. The Government generally respects religious freedom in practice. In 2008, the U.S. government received no reports of societal abuses or discrimination based on religious affiliation, belief, or practice.


Structure of the population