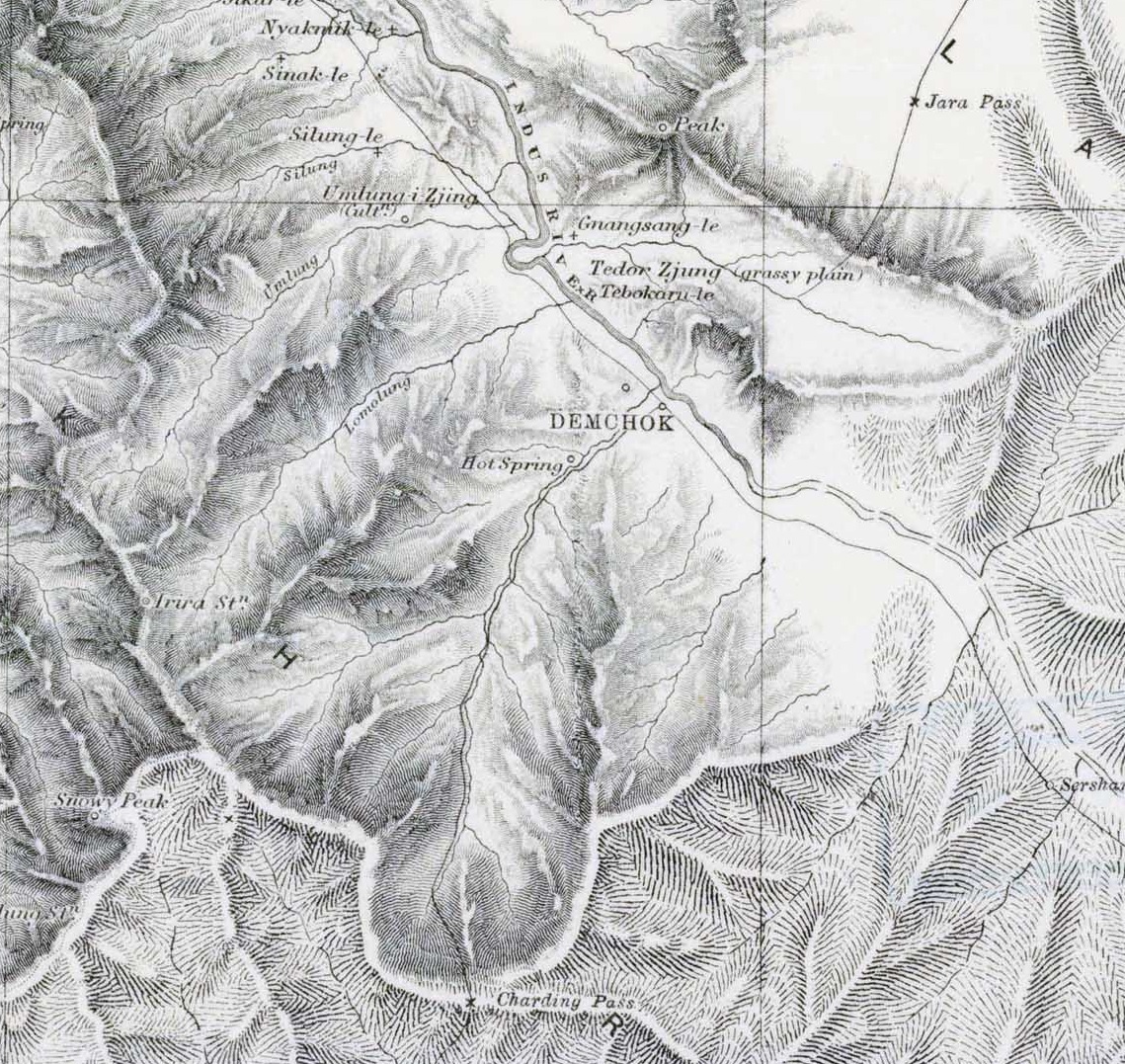 Demchok (, historical: ''bDe-mChog'') was described by a British boundary commission in 1847 as a village lying on the border between the Kingdom of Ladakh and the Tibet. It was a "hamlet of half a dozen huts and tents", divided into two parts by a rivulet which formed the boundary between two states. The rivulet, a tributary of the Indus River variously called the Demchok River, Charding Nullah or the Lhari stream, was set as the boundary between Ladakh and Tibet in the 1684 Treaty of Tingmosgang. By 1904–05, the Tibetan side of the hamlet was said to have had 8 to 9 huts of zamindars (landholders), while the Ladakhi side had two. The area of the former Demchok now straddles the Line of Actual Control, the effective border of the People's Republic of China's Tibet Autonomous Region and the Republic of India's Ladakh Union Territory.

The village lay 36.5 km east of Ukdungle (). Demchok was on an old route linking Ladakh and Tibet along the bank of the Indus River, which ran mostly through plains to Lake Manasarovar approximately 300 km away.

The ''Chronicles of Ladakh'' mention that, at the conclusion of the Tibet–Ladakh–Mughal War in 1684, the Prime Minister Desi Sangye Gyatso of Ganden Phodrang Tibet and the King of Ladakh Delek Namgyal agreed on the Treaty of Tingmosgang. The chronicles describe the treaty as fixing the boundary at "the Lhari stream at Demchok". According to Alexander Cunningham, "A large stone was then set up as a permanent boundary between the two countries, the line of demarcation drawn from the village of ''Dechhog'' emchokto the hill of ''Karbonas''."

British boundary commissioner Henry Strachey visited Demchok in 1847 on the borders of the former princely state of Jammu and Kashmir. He described the village as: The boundary commission determined that the border between the Kashmir and Tibet was at Demchok. The ''Survey of Kashmir, Ladak, and Baltistan or Little Tibet'' of 1847 to 1868 under the Great Trigonometrical Survey of India then made several adjustments to the boundary, described by Alastair Lamb as moving "sixteen miles downstream on the Indus from Demchok". However, Indian commentators state that the revenue records from the period of the survey show that the Demchok area was administered by Ladakh. In 1904–05, a tour report by the Wazir Wazarat (Governor) of Ladakh described the Tibetan side of the hamlet to have 8 to 9 huts of zamindars (landholders) and described the Ladakhi side as having two. When Sven Hedin visited the area in the November 1907, he described Demchok as four or five huts lying on the southeastern bank of the Lhari stream in Tibet, with the Ladakhi side of the Lhari stream only containing the pyramidal Lhari peak and the ruins of two or three houses.

The Chinese-administered village of Dêmqog lies on the southeast bank of the Charding Nullah and LAC. Before 1984, only 3 households were living in Dêmqog. Since 1984, the local governments have encouraged people to move to Dêmqog from surrounding areas. Dêmqog was officially established as an administrative village in 1990 and had a population of 171 people from 51 households in 2019.