Click Here for Items Related To - David II of Scotland


David II (5 March 132422 February 1371) was King of Scots for nearly 42 years, from 1329 until his death in 1371. He was the last male of the House of Bruce. Although David spent long periods in exile or captivity, he managed to ensure the survival of his kingdom and left the Scottish monarchy in a strong position.

David II was the eldest and only surviving son of Robert I of Scotland and his second wife, Elizabeth de Burgh. He was born on 5 March 1324 at Dunfermline Abbey, Fife. His mother died in 1327, when he was 3 years old. In accordance with the Treaty of Northampton's terms, on 17 July 1328, when he was 4, David was married to 7 year old Joan of the Tower, at Berwick-upon-Tweed. She was the daughter of Edward II of England and Isabella of France. They had no issue.

David became King of Scots upon the death of his father on 7 June 1329. David and his wife were crowned at Scone on 24 November 1331. During David's minority, Sir Thomas Randolph, 1st Earl of Moray, was appointed Guardian of Scotland by the Act of Settlement of 1318. After Moray's death, on 20 July 1332, he was replaced by Donald, Earl of Mar, elected by an assembly of the magnates of Scotland at Perth, 2 August 1332. Only ten days later Mar fell at the Battle of Dupplin Moor. Sir Andrew Murray of Bothwell, who was married to Christian (or Christina), the sister of King Robert I, was chosen as the new Guardian. He was taken prisoner by the English at Roxburgh in April 1333 and was thence replaced as Guardian by Archibald Douglas (the Tyneman), who fell at the Battle of Halidon Hill that July. Meanwhile, on 24 September 1332, following the Scots' defeat at Dupplin, Edward Balliol, a protégé of Edward III of England, and a pretender to the throne of Scotland, was crowned by the English and his Scots adherents. By December, however, Balliol was forced to flee to England after the Battle of Annan, although he returned the following year as part of an invasion force led by the English king. 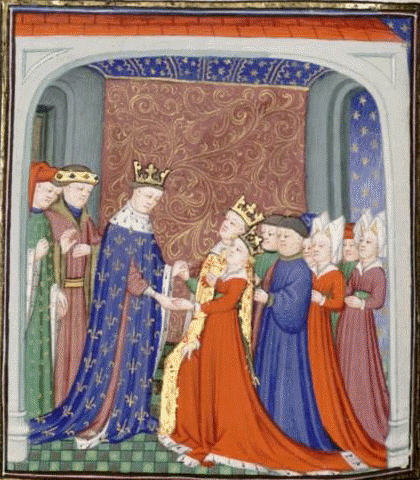 Following the English victory at the Battle of Halidon Hill in July 1333, David and his wife were sent for safety into France, reaching Boulogne on 14 May 1334. They were received very graciously by King Philip VI. Little is known about the life of the Scottish king in France, except that Château Gaillard was given to him for a residence, and that he was present at the bloodless meeting of the English and French armies in October 1339 at Vironfosse, now known as Buironfosse, in the Arrondissement of Vervins. By 1341, David's representatives had once again obtained the upper hand in Scotland. David was able to return to his kingdom, landing at Inverbervie in Kincardineshire on 2 June 1341. He took the reins of government into his own hands, at the age of 17.

In 1346, under the terms of the Auld Alliance, David invaded England in the interests of the French, who were at war with the English in Normandy. After initial success at Hexham, David was wounded, and his army soundly defeated at the Battle of Neville's Cross on 17 October 1346. David was captured and taken prisoner by Sir John de Coupland, who imprisoned him in the Tower of London. David was transferred to Windsor Castle in Berkshire upon the return of Edward III from France. The depiction of David being presented to King Edward III in the play ''The Reign of King Edward the Third'' is fictitious. David and his household were later moved to Odiham Castle in Hampshire. His imprisonment was not reputed to be a rigorous one, although he remained captive in England for eleven years. On 3 October 1357, after several protracted negotiations with the Scots' regency council, a treaty was signed at Berwick-upon-Tweed under which Scotland's nobility agreed to pay 100,000 marks, at the rate of 10,000 marks per year, as a ransom for their king. This was ratified by the Scottish Parliament at Scone on 6 November 1357.

David returned at once to Scotland, bringing with him a mistress, Katherine (or Catherine) Mortimer, of whom little is known. This was an unpopular move, and Katherine was murdered in 1360 by men hired by the Earl of Angus and other nobles, according to some sources; the Earl was then starved to death. She was replaced as mistress by Margaret Drummond. After six years, owing to the poverty of the kingdom, it was found impossible to raise the ransom instalment of 1363. David then made for London and sought to get rid of the liability by offering to bequeath Scotland to Edward III, or one of his sons, in return for a cancellation of the ransom. David did this with the full awareness that the Scots would never accept such an arrangement. In 1364, the Scottish parliament indignantly rejected a proposal to make Lionel, Duke of Clarence, the next king. Over the next few years, David strung out secret negotiations with Edward III, which apparently appeased the matter. His wife, Queen Joan, died on 7 September 1362 (aged 41) at Hertford Castle, Hertfordshire, possibly a victim of the Black Death. He remarried, on about 20 February 1364, Margaret Drummond, widow of Sir John Logie, and daughter of Sir Malcolm Drummond. He divorced her on about 20 March 1370. They had no children. Margaret, however, travelled to Avignon, and made a successful appeal to the Pope Urban V to reverse the sentence of divorce which had been pronounced against her in Scotland. She was still alive in January 1375, four years after David died. From 1364, David governed actively, dealing firmly with recalcitrant nobles, and a wider baronial revolt, led by his prospective successor, the future Robert II. David continued to pursue the goal of a final peace with England. At the time of his death, the Scottish monarchy was stronger and the country was "a free and independent kingdom" according to a reliable source. The royal finances were more prosperous than might have seemed possible.

King David II of Scotland married several times and had several mistresses, but none of his relationships produced children. 1) Joan of England was David's 1st wife. They married on 17 July 1328, when he was 4 years old and Joan was 7. Joan was the daughter of King Edward II of England and Isabella of France. The marriage was in accordance with the terms of the Treaty of Northampton. David and Joan were married for 34 years but produced no children. Queen Joan died on 7 September 1362 (aged 41) at Hertford Castle, Hertfordshire, possibly a victim of the Black Death. 2) Margaret Drummond was the widow of Sir John Logie, and daughter of Sir Malcolm Drummond. Margaret was David's mistress before the death of Queen Joan, from about 1361. David and Margaret married on 20 February 1364. Still producing no heirs, David attempted to divorce Margaret on 20 March 1370, on the grounds that she was infertile. Pope Urban V, however, reversed the divorce. When David died on 22 February 1371, Margaret and David were still actually married, according to Rome. Margaret died sometime after 31 January 1375, and her funeral was paid for by Pope Gregory XI. 3) Agnes Dunbar was David's mistress at the time of his death. He was planning to marry her, however, the marriage was delayed by the reversal of his divorce to Margaret.

David II died unexpectedly, and at the height of his power, in Edinburgh Castle on 22 February 1371. He was buried in Holyrood Abbey. The funeral was overseen by Abbot Thomas. He left no children and was succeeded by his nephew, Robert II, the son of David's half-sister Marjorie Bruce. David II was the last male of the House of Bruce.

David II has been depicted in historical novels. They include *''Cressy and Poictiers; or, the Story of the Black Prince's Page'' (1865) by John George Edgar (1834–1864). The novel depicts events of the years 1344 to 1370, with an epilogue in 1376. The events depicted cover part of the Hundred Years' War and the "Scotch Border Wars" (Second War of Scottish Independence), with the Battle of Neville's Cross (1346) being a key part of the plot. David II is one of the "principal characters", alongside Edward III of England, Philippa of Hainault, and Edward, the Black Prince. *''Flowers of Chivalry'' (1988), by Nigel Tranter, covers events of the Second War of Scottish Independence from 1332 to 1339. David II is a secondary character, the protagonists being Alexander Ramsay of Dalhousie and William Douglas, Lord of Liddesdale.