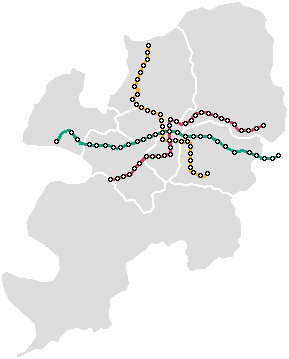 Daegu Metro () is a metro system that serves primarily the South Korean city of Daegu. On 28 April 1995, a gas explosion occurred at Line 1, a construction site located in Sangin-dong, Taegu. At least 101 people, including 42 students, were killed with as many as 202 people injured. Daegu subway fire broke out on 18 February 2003, when an arsonist set fire to a train in rush hour and killed nearly 200 people. Public safety in mass transit became a concern of Korean society. In December 2008, the Daegu Safety Theme Park opened. The goal is to educate the inhabitants of Daegu about safety in metro.

The transport department has approved plans to build an Automated Guideway Transit line. The Color Of AGT line is Purple

The fare is 1,400 won for a token to any stop on the subway and only 1,250 won with the use of a transportation card.

Daegu Metro lines are segregated each with its own distinct vehicles. Lines 1 and Line 2 uses the same railway technology (rapid transit) while Line 3 use an entirely different system (monorail).