The McDonnell Douglas DC-10 is an American tri-jet wide-body airliner manufactured by McDonnell Douglas. The DC-10 was intended to succeed the DC-8 for long-range flights. It first flew on August 29, 1970; it was introduced on August 5, 1971, by American Airlines. The trijet has two turbofans on underwing pylons and a third one at the base of the vertical stabilizer. The twin-aisle layout has a typical seating for 270 in two classes. The initial DC-10-10 had a range for transcontinental flights. The DC-10-15 had more powerful engines for hot and high airports. The DC-10-30 and -40 models (with a third main landing gear leg to support higher weights) each had intercontinental ranges of up to . The KC-10 Extender (based on the DC-10-30) is a U.S. Air Force tanker. A design flaw in the cargo doors caused a poor safety record in early operations. Following the American Airlines Flight 191 crash (the deadliest US aviation accident), the US Federal Aviation Administration (FAA) grounded all U.S. DC-10s in June 1979. In August 1983, McDonnell Douglas announced that production would end due to a lack of orders, as it had a widespread public apprehension after the 1979 crash and a poor fuel economy reputation. Design flaws were rectified and fleet hours increased, for a safety record later comparable to similar era passenger jets. Production ended in 1989, with 386 delivered to airlines along with 60 KC-10 tanker aircraft. The DC-10 outsold the similar Lockheed L-1011 TriStar. It was succeeded by the lengthened, heavier McDonnell Douglas MD-11. After merging with McDonnell Douglas in 1997, Boeing upgraded many in-service DC-10s as the MD-10 with a glass cockpit to eliminate the flight engineer position. In February 2014, the DC-10 made its last commercial passenger flight. Cargo airlines continue to operate it as a freighter, its largest operator is FedEx Express. The Orbis Flying Eye Hospital is a DC-10 adapted for eye surgery. A few DC-10s have been converted for aerial firefighting use. Some DC-10s are on display, while other retired aircraft are in storage.

Following an unsuccessful proposal for the U.S. Air Force's CX-HLS (Heavy Logistics System) in 1965, Douglas Aircraft began design studies based on its CX-HLS design. In 1966, American Airlines offered a specification to manufacturers for a widebody aircraft smaller than the Boeing 747 but capable of flying similar long-range routes from airports with shorter runways. The DC-10 became McDonnell Douglas's first commercial airliner after the merger between McDonnell Aircraft Corporation and Douglas Aircraft Company in 1967. An early DC-10 design proposal was for a four-engine double-deck wide-body jet airliner with a maximum seating capacity of 550 passengers and similar in length to a DC-8. The proposal was shelved in favor of a trijet single-deck wide-body airliner with a maximum seating capacity of 399 passengers, and similar in length to the DC-8 Super 60. On February 19, 1968, in what was supposed to be a knockout blow to the competing Lockheed L-1011, George A. Spater, President of American Airlines, and James S. McDonnell of McDonnell Douglas announced American Airlines' intention to acquire the DC-10. This was a shock to Lockheed and there was general agreement within the U.S. aviation industry that American Airlines had left its competitors at the starting gate. Together with American Airlines' decision to announce the DC-10 order, it was also reported that American Airlines had declared its intention to have the British Rolls-Royce RB211 turbofan engine on its DC-10 aircraft. 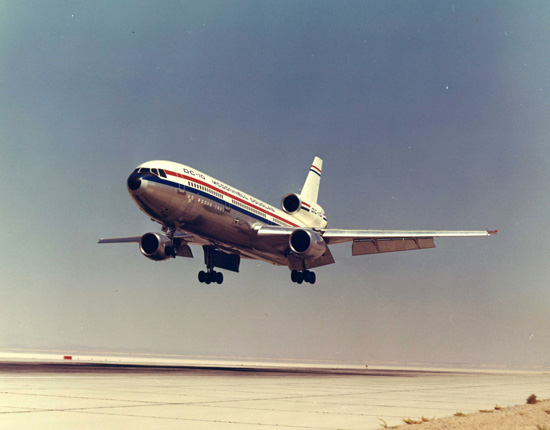 The DC-10 was first ordered by launch customers American Airlines with 25 orders, and United Airlines with 30 orders and 30 options in 1968. The first DC-10, a series 10, made its maiden flight on August 29, 1970. Following a test program with 929 flights covering 1,551 hours, the DC-10 received its type certificate from the FAA on July 29, 1971. It entered commercial service with American Airlines on August 5, 1971 on a round trip flight between Los Angeles and Chicago, with United Airlines beginning DC-10 flights later that month. American's DC-10s had seating for 206 and United's seated 222; both had six-across seating in first-class and eight-across (four pairs) in coach. The DC-10's similarity to the Lockheed L-1011 in design, passenger capacity, and launch date resulted in a sales competition that affected profitability of the aircraft. The first DC-10 version was the "domestic" series 10 with a range of 3,800 miles (3,300 nmi, 6,110 km) with a typical passenger load and a range of 2,710 miles (2,350 nmi, 4,360 km) with maximum payload. The series 15 had a typical load range of 4,350 miles (3,780 nmi, 7,000 km). The series 20 was powered by Pratt & Whitney JT9D turbofan engines, whereas the series 10 and 30 engines were General Electric CF6. Before delivery of its aircraft, Northwest's president asked that the "series 20" aircraft be redesignated "series 40" because the aircraft was much improved over the original design. The FAA issued the series 40 certificate on October 27, 1972. In 1972, unit cost was US$20M ($M today). The series 30 and 40 were the longer-range "international" versions. The main visible difference between the models is that the series 10 has three sets of landing gear (one front and two main) while the series 30 and 40 have an additional centerline main gear. The center main two-wheel landing gear (which extends from the center of the fuselage) was added to distribute the extra weight and for additional braking. The series 30 had a typical load range of 6,220 mi (10,010 km) and a maximum payload range of 4,604 mi (7,410 km). The series 40 had a typical load range of 5,750 miles (9,265 km) and a maximum payload range of 4,030 miles (3,500 nmi, 6,490 km).