Creative Commons (CC) is an American non-profit organization and international network devoted to educational access and expanding the range of creative works available for others to build upon legally and to share. The organization has released several copyright licenses, known as Creative Commons licenses, free of charge to the public. These licenses allow authors of creative works to communicate which rights they reserve and which rights they waive for the benefit of recipients or other creators. An easy-to-understand one-page explanation of rights, with associated visual symbols, explains the specifics of each Creative Commons license. Creative Commons licenses do not replace copyright, but are based upon it. They replace individual negotiations for specific rights between copyright owner (licensor) and licensee, which are necessary under an "all rights reserved" copyright management, with a "some rights reserved" management employing standardized licenses for re-use cases where no commercial compensation is sought by the copyright owner. The organization was founded in 2001 by Lawrence Lessig, Hal Abelson, and Eric Eldred with the support of Center for the Public Domain. The first article in a general interest publication about Creative Commons, written by Hal Plotkin, was published in February 2002. The first set of copyright licenses was released in December 2002. The founding management team that developed the licenses and built the Creative Commons infrastructure as we know it today included Molly Shaffer Van Houweling, Glenn Otis Brown, Neeru Paharia, and Ben Adida. In 2002, the Open Content Project, a 1998 precursor project by David A. Wiley, announced the Creative Commons as successor project and Wiley joined as CC director. Aaron Swartz played a role in the early stages of Creative Commons, as did Matthew Haughey. As of May 2018, there were 1.4 billion works licensed under the various Creative Commons licenses. Wikipedia uses one of these licenses. As of May 2018, Flickr alone hosted over 415 million Creative Commons-licensed photos. 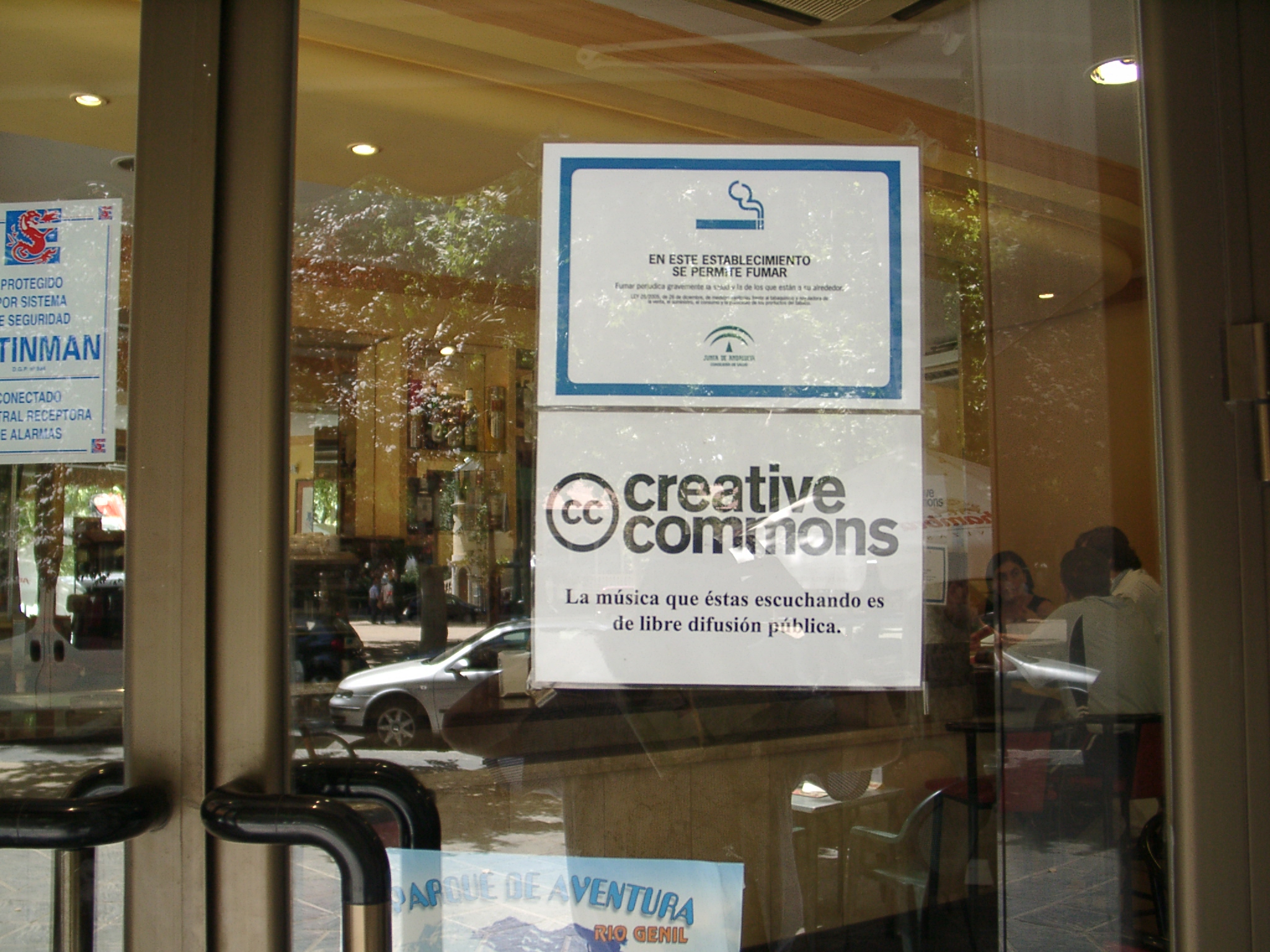 Creative Commons has been described as being at the forefront of the copyleft movement, which seeks to support the building of a richer public domain by providing an alternative to the automatic "all rights reserved" copyright, and has been dubbed "some rights reserved". David Berry and Giles Moss have credited Creative Commons with generating interest in the issue of intellectual property and contributing to the re-thinking of the role of the "commons" in the "information age". Beyond that, Creative Commons has provided "institutional, practical and legal support for individuals and groups wishing to experiment and communicate with culture more freely." Creative Commons attempts to counter what Lawrence Lessig, founder of Creative Commons, considers to be a dominant and increasingly restrictive permission culture. Lessig describes this as "a culture in which creators get to create only with the permission of the powerful, or of creators from the past." Lessig maintains that modern culture is dominated by traditional content distributors in order to maintain and strengthen their monopolies on cultural products such as popular music and popular cinema, and that Creative Commons can provide alternatives to these restrictions. In mid‑December 2020, Creative Commons released its strategy for the upcoming five years.

Until April 2018 Creative Commons had over 100 affiliates working in over 75 jurisdictions to support and promote CC activities around the world. In 2018 this affiliate network has been restructured into a network organisation. The network no longer relies on affiliate organisation but on individual membership organised in Chapter.

Creative Commons Japan (CC Japan/CCJP) is the affiliated network of Creative Commons in Japan. In 2003, the International University GLOCOM held a meeting for the CC Japan preparation. In March 2004, CC Japan was launched by GLOCOM University. CC Japan is the world’s second CC affiliated network (the first is in America). In March 2006, CC Japan become the NPO and be in motion. In the same month, the CC founder Lawrence Lessig came to Japan to be one of the main holders of the open ceremony. Within the same year, between May and June, different international events were held in Japan, including iSummit 06 and the first through third rounds of CCJP. In February 2007, the ICC x ClipLife 15 second CM competition was held. In June, iSummit 07 was held. In July, the fourth CCJP was held. On July 25, Tokyo approved to become the NGO chairman of CCJP. In 2008, Taipie ACIA joined CCJP. The main theme music which was chosen by CCJP was announced. In 2009, INTO INFINITY shown in Tokyo and Sapporo. iPhone held the shows with Audio Visual Mixer for INTO INFINITY. (Apple joint research and development with CCJP) In 2012, the 10th anniversary ceremony was held in Japan. In 2015, Creative Commons 4.0 and Creative Commons 0 were released in Japanese language.

Bassel Khartabil was a Palestinian Syrian open source software developer who served as a project lead and public affiliate for Creative Commons Syria. On March 15, 2012, he was detained by the Syrian government in Damascus at Adra Prison for no crime. On October 17, 2015, Creative Commons Board of Directors passed a resolution calling for Bassel Khartabil's release. In 2017, Bassel's wife received confirmation that Bassel had been killed shortly after she lost contact with him in 2015.

All current CC licenses (except the CC0 Public Domain Dedication tool) require attribution (attributing the authors of the original creative works), which can be inconvenient for works based on multiple other works. Critics feared that Creative Commons could erode the copyright system over time, or allow "some of our most precious resources – the creativity of individuals – to be simply tossed into the commons to be exploited by whomever has spare time and a magic marker." Critics also worried that the lack of rewards for content producers would dissuade artists from publishing their work, and questioned whether Creative Commons would enable the commons that it aimed to create. Creative Commons founder Lawrence Lessig countered that copyright laws have not always offered the strong and seemingly indefinite protection that today's law provides. Rather, the duration of copyright used to be limited to much shorter terms of years, and some works never gained protection because they did not follow the now-abandoned compulsory format. The maintainers of Debian, a Linux distribution known for its strict adherence to a particular definition of software freedom, rejected the Creative Commons Attribution License prior to version 3 as incompatible with the Debian Free Software Guidelines (DFSG) due to the license's anti-DRM provisions (which might, due to ambiguity, be covering more than DRM) and its requirement that downstream users remove an author's credit upon request from the author. Version 3.0 of the Creative Commons licenses addressed these concerns and, except for the non commercial and no-derivative variants, are considered to be compatible with the DFSG. Kent Anderson, writing for ''The Scholarly Kitchen'', a blog of the Society for Scholarly Publishing, criticized CC as being grounded on copyright principles and not really departing from it, and as being more complex and complicating than the latter – thus the public does not scrutinize CC, reflexively accepting it as one would a software license – while at the same time weakening the rights provided by copyright. Anderson ends up concluding that this is the point, and that "Creative Commons receives significant funding from large information companies like Google, Nature Publishing Group, and RedHat", and that Google money is especially linked to CC's history; for him, CC is "an organization designed to promulgate the interests of technology companies and Silicon Valley generally".

According to Mako Hill, Creative Commons has established a range of licenses tailored to meet the different protection interests of authors of creative works, rather than forcing a single forced standard as a "base level of freedom" that all Creative Commons licenses must meet, and with which all licensors and users must comply. "By failing to take any firm ethical position and draw any line in the sand, CC is a missed opportunity. ...CC has replaced what could have been a call for a world where 'essential rights are unreservable' with the relatively hollow call for 'some rights reserved. He also argued that Creative Commons enables license proliferation, by providing multiple licenses that are incompatible. The Creative Commons website states, "Since each of the six CC licenses functions differently, resources placed under different licenses may not necessarily be combined with one another without violating the license terms." Works licensed under incompatible licenses may not be recombined in a derivative work without obtaining permission from the copyright owner. Richard Stallman of the FSF stated in 2005 that he couldn't support Creative Commons as an activity because "it adopted some additional licenses which do not give everyone that minimum freedom", that freedom being "the freedom to share, noncommercially, any published work". Those licenses have since been retired by Creative Commons. 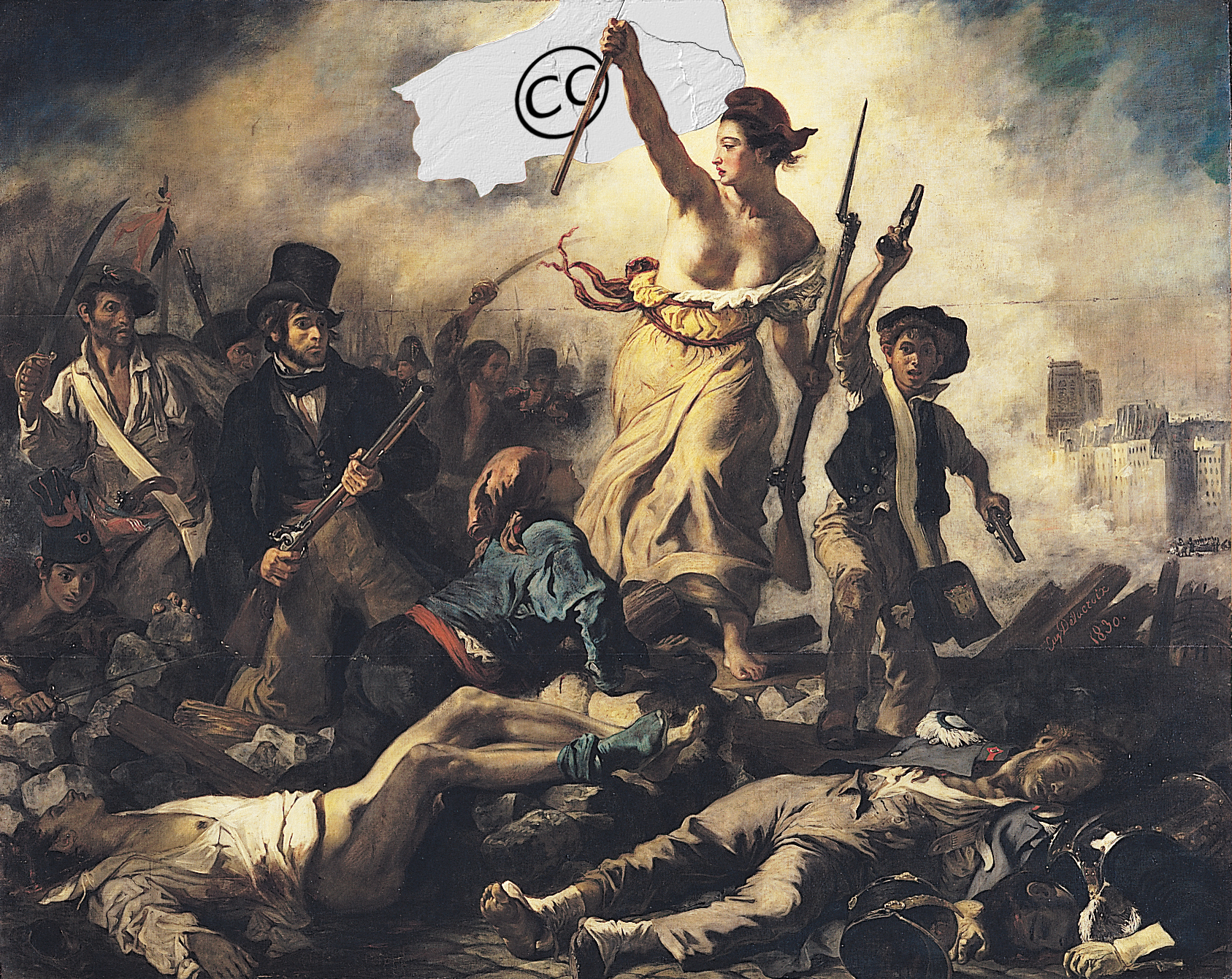 Creative Commons is only a service provider for standardized license text, not a party in any agreement. No central database of Creative Commons works is controlling all licensed works and the responsibility of the Creative Commons system rests entirely with those using the licences. This situation is, however, not specific to Creative Commons. All copyright owners must individually defend their rights and no central database of copyrighted works or existing license agreements exists. The United States Copyright Office does keep a database of all works registered with it, but absence of registration does not imply absence of copyright, and CC licensed works can be registered on the same terms as unlicensed works or works licensed under any other licences. Although Creative Commons offers multiple licenses for different uses, some critics suggested that the licenses still do not address the differences among the media or among the various concerns that different authors have. Lessig wrote that the point of Creative Commons is to provide a middle ground between two extreme views of copyright protection – one demanding that all rights be controlled, and the other arguing that none should be controlled. Creative Commons provides a third option that allows authors to pick and choose which rights they want to control and which they want to grant to others. The multitude of licenses reflects the multitude of rights that can be passed on to subsequent creators.

Various commentators have reported confusion in understanding what "noncommercial" use means. Creative Commons issued a report in 2009, "Defining noncommercial", which presented research and various perspectives. The report claimed that noncommercial to many people means "no exchange of money or any commerce". Beyond that simple statement, many people disagree on whether noncommercial use permits publishing on websites supported with advertising, sharing noncommercial media through nonprofit publishing for a fee, and many other practices in contemporary media distribution. Creative Commons has not sought to resolve the confusion, in part because of high consumer demand for the noncommercial license as is with its ambiguity.

In 2007, Virgin Mobile Australia launched a bus stop advertising campaign which promoted its mobile phone text messaging service using the work of amateur photographers who uploaded their work to the photo-sharing site Flickr using a Creative Commons by Attribution license. Users licensing their images this way freed their work for use by any other entity, as long as the original creator was attributed credit, without any other compensation being required. Virgin upheld this single restriction by printing a URL, leading to the photographer's Flickr page, on each of their ads. However, one picture depicted 15-year-old Alison Chang posing for a photo at her church's fund-raising carwash, with the superimposed, mocking slogan "Dump Your Pen Friend". Chang sued Virgin Mobile and Creative Commons. The photo was taken by Chang's church youth counsellor, Justin Ho-Wee Wong, who uploaded the image to Flickr under the Creative Commons license. On November 27, 2007, Chang voluntary dismissed the lawsuit against Creative Commons, focusing the lawsuit only against Virgin Mobile. The case was thrown out of court due to lack of jurisdiction and subsequently Virgin Mobile did not incur any damages towards the plaintiff.