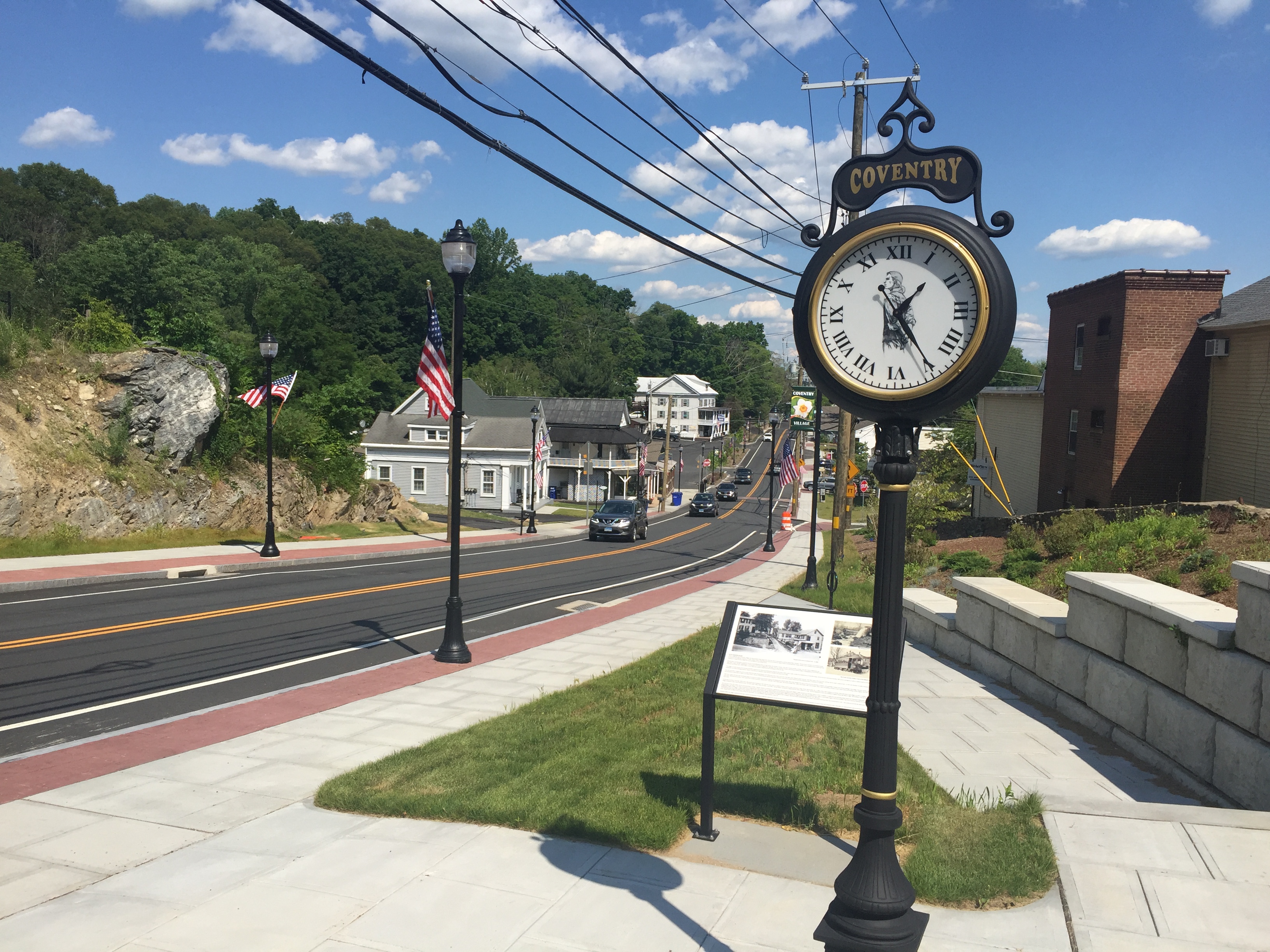 Coventry ( ) is a
town A town is a human settlement. Towns are generally larger than villages and smaller than cities, though the criteria to distinguish between them vary considerably in different parts of the world. Origin and use The word "town" shares ...
in Tolland County,
Connecticut Connecticut () is the southernmost state in the New England region of the United States. As of the 2010 Census, it has the highest per-capita income, second-highest level of human development behind Massachusetts, and highest median household ...
. The population was 12,435 at the 2010 census. The birthplace of Captain
Nathan Hale Nathan Hale (June 6, 1755 – September 22, 1776) was an American soldier and spy for the Continental Army during the American Revolutionary War. He volunteered for an intelligence-gathering mission in New York City but was captured by the Briti ...

, Coventry is home to the
Nathan Hale Homestead The Nathan Hale Homestead is a historic home located at 2299 South Street in Coventry, Connecticut. It was added to the National Register of Historic Places in 1970, and was also known as Deacon Richard Hale House. Connecticut Landmarks operates th ...
, which is now a museum open to the public. Coventry was incorporated in May 1712.

Coventry was named in October 1711, the first town in the colonies to be named "Coventry" for Coventry in the West Midlands (county), West Midlands, United Kingdom.

The first house in Coventry was said to have been built near the shore of Wangumbaug Lake by Nathaniel Rust, a Hartford, Connecticut man, originally from Northampton, Massachusetts. The entire Rust family is said to have made their final move to Coventry from Massachusetts in a group of a dozen families in 1709. Along with Nathaniel Rust, the names of some of the earliest settlers were David Lee, Thomas Root, Samuel Gurley, Ebenezer Searl, Joseph Petty, Benjamin James and Benjamin Carpenter. Four other settlers were also from Northampton and two from Reading, MA, Reading. The land was said to have originally been given to men from Hartford by Joshua, Indian sachem. The Connecticut General Assembly, held in Hartford in 1706, appointed William Pitkin, Joseph Tallcot, William Whiting and Richard Lord, as a committee with full power to lay out the bounds of the town and divisions of the land, to admit inhabitants. A 1711 revision added Nathaniel Rust to the committee and the task of procuring a minister of the gospel. Coventry was formally formed as a town in Hartford County in 1712. The first church was established in October 1714. Coventry became a town in Windham County on 12 May 1726, then became a town in Tolland County when it was originally formed on 13 October 1785. St. Mary's Church is a Roman Catholic church in Coventry. The church is part of the Roman Catholic Diocese of Norwich, Diocese of Norwich, located at 1600 Main Street in town.

The old center of the town is in South Coventry (CDP), Connecticut, South Coventry, near the intersection of Main Street (Route 31 (Connecticut), Route 31) and Stonehouse Road (Route 275 (Connecticut), Route 275). In the 19th century, there was a small industrial center including mills powered by the water from Coventry Lake Brook as it flowed towards the Willimantic River. South Coventry Village, listed on the National Register of Historic Places, also includes several Victorian architecture, Victorian houses, a museum, the main branch of the public library and the Bidwell Tavern, a bar/restaurant established in 1822. The Bidwell used to keep Coventry's town records in the "vault" area behind the bar, as well as hosting town meetings. A few doors away is the W.L. Wellwood General Store, which under new ownership has been renamed "Coventry Country Store". The general store was originally built in 1787 making it the oldest General Store in America (a past owner claimed to have not found an older store). In all, the area has over 100 historical buildings on the national register. North Coventry's settlement is less dense, and its housing and businesses are of more recent construction. In the 18th century, this section of the town was largely used for dairy and vegetable farming. As the United States expanded westward, many farming families left the rocky fields of Connecticut for the more fertile land of the Ohio River valley. Most of the farms in North Coventry were abandoned, and the land reclaimed by second-growth forest. In the 1960s and 1970s, tract housing developments were built on some of this land, mainly raised ranch or split-level houses on one acre (4,000 m2) lots. Development slowed from the mid-1970s through the 1990s, but several new developments were constructed in North Coventry after 1990. These tend to feature larger houses on two acre (8,000 m2) lots.

*Wangumbaug Lake, also known as Coventry Lake, covers . The lake is fed by springs, and has one natural outlet, known as Coventry Lake Brook. The brook flows towards South Coventry center and ultimately into the Willimantic River. Patriots Park, located on Wangumbaug Lake, contains a guarded beach, playground, picnic area, lodge facilities, Community Center, and band shell for summer concerts. It is also home of the Coventry Lake Water Ski Team and UConn Men and Women's Crew Teams. The boat launch is run by the State of Connecticut. Occasionally, during the winter months, the lake will freeze over and residents have the opportunity to ice skating, skate or ice fishing, fish on the ice. A lake island, Underwood Island, is located 100 yards from the coast of the lake. *
Nathan Hale Homestead The Nathan Hale Homestead is a historic home located at 2299 South Street in Coventry, Connecticut. It was added to the National Register of Historic Places in 1970, and was also known as Deacon Richard Hale House. Connecticut Landmarks operates th ...
, first established around 1740 by Deacon Richard Hale (1717–1802), the present structure has been standing since 1776 and was built to house the combined family of Deacon Hale and his second wife Abigail (Cobb) Adams. The original house, birthplace of Nathan Hale in 1755, is said to have been on the property, just southeast of the 1776 house. The original of the Hale farm now make up a large portion of the Nathan Hale State Forest. Today the Hale family home, located on South Street, is a museum open seasonally for tours and education programs

*The Strong House (Coventry, Connecticut), Strong-Porter House Museum, circa 1730, is listed on the National Register of Historic Places and serves as the Coventry Historical Society's museum. Five rooms of the house, as well as several outbuildings, including a carpenter shop, carriage sheds, and barn are open to the public. *The Brick School House (Coventry, Connecticut), Brick School House, second construction completed in 1825 after original burned, it is one of the four remaining district schoolhouses in Coventry and was used through 1953. *Caprilands Herb Farm, c.1740 colonial farmstead, home for over 65 years to the late herbalist and author, Adelma Simmons, Adelma Grenier Simmons. *Hytone Farm, owned and operated by the Peracchio family since the early 1940s and a fully operational dairy farm since 1960, they raise all their own Holstein cattle, Holstein cows, currently have 165 young stock and use over of corn and grass for silage. Hytone Farm has received many Distinguished Farming awards through their years. * Museum of Connecticut Glass is a new museum focusing on glassmaking in the state.

*Austin Cornelius Dunham, businessman *Elisha W. Edgerton (1815–1904), businessman and member of the Wisconsin State Assembly *Jesse Root (1736–1822), resident who served in the Continental Congress representing Connecticut from 1778 until 1782 and sat as chief justice of the Connecticut Supreme Court from 1796 to 1807. *
Nathan Hale Nathan Hale (June 6, 1755 – September 22, 1776) was an American soldier and spy for the Continental Army during the American Revolutionary War. He volunteered for an intelligence-gathering mission in New York City but was captured by the Briti ...

Coventry is Twin towns and sister cities, twinned with Coventry in the United Kingdom.

This climate, climatic region is typified by large seasonal temperature differences, with warm to hot (and often humid) summers and cold (sometimes severely cold) winters. According to the Köppen Climate Classification system, Coventry has a humid continental climate, abbreviated "Dfb" on climate maps.