Cockroaches (or roaches) are insects of the order Blattodea, which also includes termites. About 30 cockroach species out of 4,600 are associated with human habitats. Some species are well-known as pests. The cockroaches are an ancient group, with ancestors originating during the Carboniferous period, some 300-350 million years ago. Those early ancestors, however, lacked the internal ovipositors of modern roaches. Cockroaches are somewhat generalized insects lacking special adaptations (such as the sucking mouthparts of aphids and other true bugs); they have chewing mouthparts and are likely among the most primitive of living Neopteran insects. They are common and hardy insects capable of tolerating a wide range of climates, from Arctic cold to tropical heat. Tropical cockroaches are often much larger than temperate species. Contrary to popular belief, extinct cockroach relatives (Blattoptera) and 'roachoids' such as the Carboniferous ''Archimylacris'' and the Permian ''Apthoroblattina'' were not as large as the biggest modern species. Some species, such as the gregarious German cockroach, have an elaborate social structure involving common shelter, social dependence, information transfer and kin recognition. Cockroaches have appeared in human culture since classical antiquity. They are popularly depicted as dirty pests, although the majority of species are inoffensive and live in a wide range of habitats around the world.

Cockroaches are members of the order Blattodea, which includes the termites, a group of insects once thought to be separate from cockroaches. Currently, 4,600 species and over 460 genera are described worldwide. The name "cockroach" comes from the Spanish word for cockroach, ''cucaracha'', transformed by 1620s English folk etymology into "cock" and "roach". The scientific name derives from the Latin ''blatta'', "an insect that shuns the light", which in classical Latin was applied not only to cockroaches, but also to mantids. Historically, the name Blattaria was used largely interchangeably with the name Blattodea, but whilst Blattaria was used to refer to 'true' cockroaches exclusively, the Blattodea also includes the termites. The current catalogue of world cockroach species uses the name Blattodea for the group. Another name, Blattoptera, is also sometimes used to refer to extinct cockroach relatives. The earliest cockroach-like fossils ("blattopterans" or "roachids") are from the Carboniferous period 320 million years ago, as are fossil roachoid nymphs. According to one hypothesis, cockroaches were an ancient group of insects that arose during the Devonian epoch. Fossil roachoids that lived during that time differ from modern cockroaches in that they had long external ovipositors and are the ancestors of mantises, as well as modern cockroaches. As the body, hind wings and mouthparts are not preserved in fossils frequently, the relationship of these roachoids and modern cockroaches remains disputed. The first fossils of modern cockroaches with internal ovipositors appeared in the early Cretaceous. A recent phylogenetic analysis suggests that cockroaches originated at least in the Jurassic. Common Mesozoic stem-group cockroaches include the Blattulidae and Mesoblattinidae. The evolutionary relationships of the Blattodea (cockroaches and termites) shown in the cladogram are based on Eggleton, Beccaloni and Inward (2007). The cockroach families Anaplectidae, Lamproblattidae, and Tryonicidae are not shown but are placed within the superfamily Blattoidea. The cockroach families Corydiidae and Ectobiidae were previously known as the Polyphagidae and Blattellidae. Termites were previously regarded as a separate order Isoptera to cockroaches. However, recent genetic evidence strongly suggests that they evolved directly from 'true' cockroaches, and many authors now place them as an "epifamily" of Blattodea. This evidence supported a hypothesis suggested in 1934 that termites are closely related to the wood-eating cockroaches (genus ''Cryptocercus''). This hypothesis was originally based on similarity of the symbiotic gut flagellates in termites regarded as living fossils and wood-eating cockroaches. Additional evidence emerged when F. A. McKittrick (1965) noted similar morphological characteristics between some termites and cockroach nymphs. The similarities among these cockroaches and termites have led some scientists to reclassify termites as a single family, the Termitidae, within the order Blattodea. Other scientists have taken a more conservative approach, proposing to retain the termites as the Termitoidae, an epifamily within the order. Such a measure preserves the classification of termites at family level and below.

Most species of cockroach are about the size of a thumbnail, but several species are larger. The world's heaviest cockroach is the Australian giant burrowing cockroach ''Macropanesthia rhinoceros'', which can reach in length and weigh more than . Comparable in size is the Central American giant cockroach ''Blaberus giganteus''. The longest cockroach species is ''Megaloblatta longipennis'', which can reach in length and across. A Central and South American species, ''Megaloblatta blaberoides'', has the largest wingspan of up to . 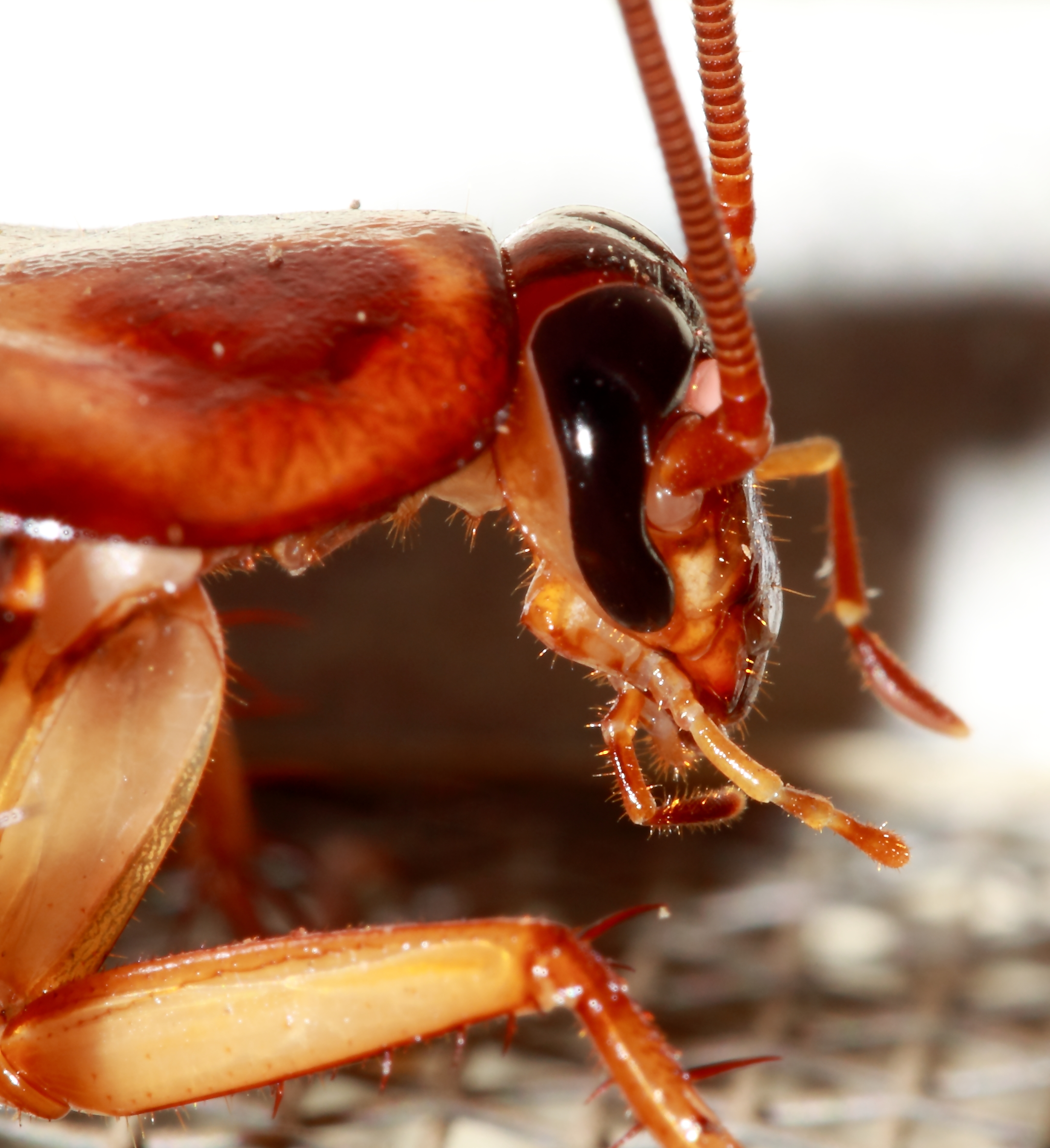 Cockroaches are generalized insects with few special adaptations, and may be among the most primitive living Neopteran insects. They have a relatively small head and a broad, flattened body, and most species are reddish-brown to dark brown. They have large compound eyes, two ocelli, and long, flexible antennae. The mouthparts are on the underside of the head and include generalized chewing mandibles, salivary glands and various touch and taste receptors. The body is divided into a thorax of three segments and a ten-segmented abdomen. The external surface has a tough exoskeleton which contains calcium carbonate; this protects the inner organs and provides attachment to muscles. This external exoskeleton is coated with wax to repel water. The wings are attached to the second and third thoracic segments. The tegmina, or first pair of wings, are tough and protective; these lay as a shield on top of the membranous hind wings, which are used in flight. All four wings have branching longitudinal veins, as well as multiple cross-veins. The three pairs of legs are sturdy, with large coxae and five claws each.