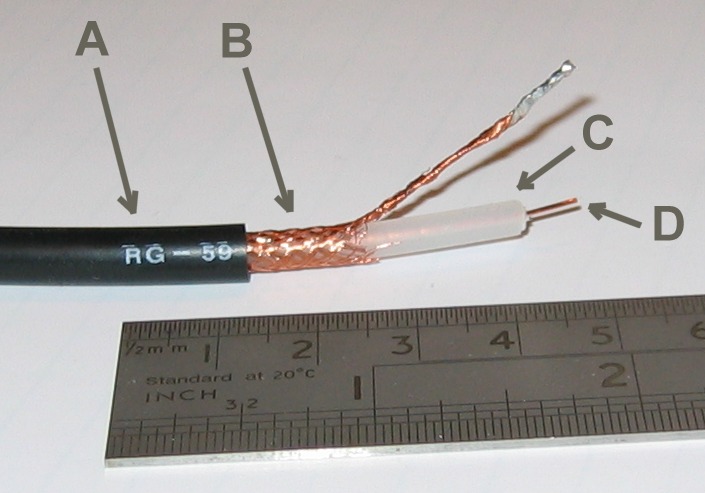 Coaxial cable, or coax (pronounced ) is a type of electrical cable consisting of an inner conductor surrounded by a concentric conducting shield, with the two separated by a dielectric (insulating material); many coaxial cables also have a protective outer sheath or jacket. The term "coaxial" refers to the inner conductor and the outer shield sharing a geometric axis. Coaxial cable is a type of transmission line, used to carry high-frequency electrical signals with low losses. It is used in such applications as telephone trunklines, broadband internet networking cables, high-speed computer data busses, cable television signals, and connecting radio transmitters and receivers to their antennas. It differs from other shielded cables because the dimensions of the cable and connectors are controlled to give a precise, constant conductor spacing, which is needed for it to function efficiently as a transmission line. Coaxial cable was used in the first (1858) and following transatlantic cable installations, but its theory wasn't described until 1880 by English physicist, engineer, and mathematician Oliver Heaviside, who patented the design in that year (British patent No. 1,407). showed how coaxial cable could eliminate signal interference between parallel cables.]]

Coaxial cable is used as a transmission line for radio frequency signals. Its applications include feedlines connecting radio transmitters and receivers to their antennas, computer network (e.g., Ethernet) connections, digital audio (S/PDIF), and distribution of cable television signals. One advantage of coaxial over other types of radio transmission line is that in an ideal coaxial cable the electromagnetic field carrying the signal exists only in the space between the inner and outer conductors. This allows coaxial cable runs to be installed next to metal objects such as gutters without the power losses that occur in other types of transmission lines. Coaxial cable also provides protection of the signal from external electromagnetic interference.

Coaxial cable conducts electrical signal using an inner conductor (usually a solid copper, stranded copper or copper plated steel wire) surrounded by an insulating layer and all enclosed by a shield, typically one to four layers of woven metallic braid and metallic tape. The cable is protected by an outer insulating jacket. Normally, the outside of the shield is kept at ground potential and a signal carrying voltage is applied to the center conductor. The advantage of coaxial design is that with differential mode, equal push-pull currents on the inner conductor, and inside of the outer conductor, the signal's electric and magnetic fields are restricted to the dielectric, with little leakage outside the shield. Further, electric and magnetic fields outside the cable are largely kept from interfering with signals inside the cable, if unequal currents are filtered out at the receiving end of the line. This property makes coaxial cable a good choice both for carrying weak signals, that cannot tolerate interference from the environment, and for stronger electrical signals, that must not be allowed to radiate or couple into adjacent structures or circuits. Larger diameter cables and cables with multiple shields have less leakage. Common applications of coaxial cable include video and CATV distribution, RF and microwave transmission, and computer and instrumentation data connections. The characteristic impedance of the cable () is determined by the dielectric constant of the inner insulator and the radii of the inner and outer conductors. In radio frequency systems, where the cable length is comparable to the wavelength of the signals transmitted, a uniform cable characteristic impedance is important to minimize loss. The source and load impedances are chosen to match the impedance of the cable to ensure maximum power transfer and minimum standing wave ratio. Other important properties of coaxial cable include attenuation as a function of frequency, voltage handling capability, and shield quality.

Coaxial cable design choices affect physical size, frequency performance, attenuation, power handling capabilities, flexibility, strength, and cost. The inner conductor might be solid or stranded; stranded is more flexible. To get better high-frequency performance, the inner conductor may be silver-plated. Copper-plated steel wire is often used as an inner conductor for cable used in the cable TV industry. The insulator surrounding the inner conductor may be solid plastic, a foam plastic, or air with spacers supporting the inner wire. The properties of the dielectric insulator determine some of the electrical properties of the cable. A common choice is a solid polyethylene (PE) insulator, used in lower-loss cables. Solid Teflon (PTFE) is also used as an insulator, and exclusively in plenum-rated cables. Some coaxial lines use air (or some other gas) and have spacers to keep the inner conductor from touching the shield. Many conventional coaxial cables use braided copper wire forming the shield. This allows the cable to be flexible, but it also means there are gaps in the shield layer, and the inner dimension of the shield varies slightly because the braid cannot be flat. Sometimes the braid is silver-plated. For better shield performance, some cables have a double-layer shield.