Cincinnati ( ) is a major city in the U.S. state of Ohio and the government seat of Hamilton County. Settled in 1788, the city is located at the northern side of the confluence of the Licking and Ohio rivers, the latter of which marks the state line with Kentucky. The city is the economic and cultural hub of the Cincinnati metropolitan area. With an estimated population of 2,190,209, it is Ohio's largest metropolitan area and the nation's 29th-largest, and with a city population estimated at 303,940, Cincinnati is the third-largest city in Ohio and 64th in the United States. Cincinnati is within a day's drive of 49.7% of the United States populace, ranking it as fourth in the list of metro areas with the largest population base within one day's drive time. In the 19th century, Cincinnati was an American boomtown in the middle of the country. Throughout much of the 19th century, it was listed among the top 10 U.S. cities by population, surpassed only by New Orleans and the older, established settlements of the United States eastern seaboard, as well as being the sixth-biggest city for a period spanning 1840 until 1860. Cincinnati developed with fewer immigrants and less influence from Europe than East Coast cities in the same period. However, it received a significant number of German-speaking immigrants, who founded many of the city's cultural institutions. By the end of the 19th century, with the shift from steamboats to railroads drawing off freight shipping, trade patterns had altered and Cincinnati's growth slowed considerably. The city was surpassed in population by other inland cities, particularly Chicago, which developed based on strong commodity exploitation, economics, and the railroads, and St. Louis, which for decades after the Civil War served as the gateway to westward migration. Cincinnati is home to three major sports teams: the Cincinnati Reds of Major League Baseball; the Cincinnati Bengals of the National Football League; and FC Cincinnati of Major League Soccer, and the Cincinnati Cyclones, a minor league ice hockey team. The city's largest institution of higher education, the University of Cincinnati, was founded in 1819 as a municipal college and is now ranked as one of the 50 largest in the United States. Cincinnati is home to historic architecture with many structures in the urban core having remained intact for 200 years. In the late 1800s, Cincinnati was commonly referred to as the "Paris of America", due mainly to such ambitious architectural projects as the Music Hall, Cincinnatian Hotel, and Shillito Department Store. Cincinnati is the birthplace of William Howard Taft, the 27th President of the United States.

Two years after the founding of the settlement, Arthur St. Clair, the governor of the Northwest Territory, changed its name to "Cincinnati", possibly at the suggestion of the surveyor Israel Ludlow, in honor of the Society of the Cincinnati. St. Clair was at the time president of the Society, made up of Continental Army officers of the Revolutionary War who named their club for Lucius Quinctius Cincinnatus, a dictator in the early Roman Republic who saved Rome from a crisis, and then retired to farming because he did not want to remain in power.

Cincinnati began in 1788 when Mathias Denman, Colonel Robert Patterson, and Israel Ludlow landed at a spot at the northern bank of the Ohio opposite the mouth of the Licking and decided to settle there. The original surveyor, John Filson, named it "Losantiville". On January 4, 1790, St. Clair changed the name of the settlement to honor the Society of the Cincinnati. In 1811, the introduction of steamboats on the Ohio River opened up the city's trade to more rapid shipping, and the city established commercial ties with St. Louis, Missouri, and New Orleans downriver. Cincinnati was incorporated as a city on March 1, 1819. Exporting pork products and hay, it became a center of pork processing in the region. From 1810 to 1830, the city's population nearly tripled, from 9,642 to 24,831. Construction on the Miami and Erie Canal began on July 21, 1825, when it was called the Miami Canal, related to its origin at the Great Miami River. The first section of the canal was opened for business in 1827. In 1827, the canal connected Cincinnati to nearby Middletown; by 1840, it had reached Toledo. Railroads were the next major form of commercial transportation to come to Cincinnati. In 1836, the Little Miami Railroad was chartered. Construction began soon after, to connect Cincinnati with the Mad River and Lake Erie Railroad, and provide access to the ports of the Sandusky Bay on Lake Erie. During the time, employers struggled to hire enough people to fill positions. The city had a labor shortage until large waves of immigration by Irish and Germans in the late 1840s. The city grew rapidly over the next two decades, reaching 115,000 people by 1850. During this period of rapid expansion and prominence, residents of Cincinnati began referring to the city as the Queen City. 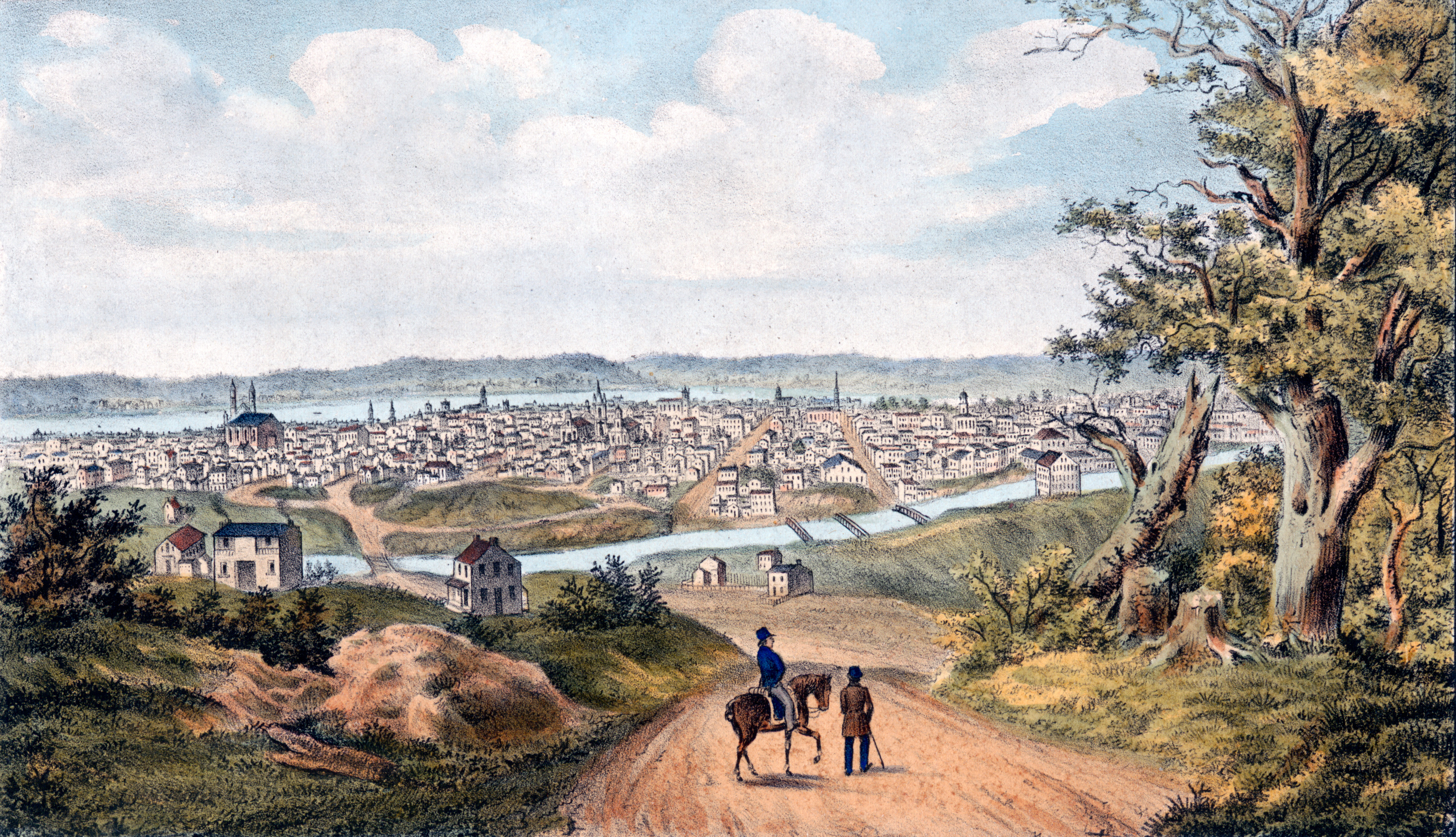 In 1859, Cincinnati laid out six streetcar lines; the cars were pulled by horses and the lines made it easier for people to get around the city. By 1872, Cincinnatians could travel on the streetcars within the city and transfer to rail cars for travel to the hill communities. The Cincinnati Inclined Plane Company began transporting people to the top of Mount Auburn that year. In 1889, the Cincinnati streetcar system began converting its horse-drawn cars to electric streetcars. In 1880 the city government completed the Cincinnati Southern Railway to Chattanooga, Tennessee. It is the only municipally owned interstate railway in the United States. In 1884 outrage over a manslaughter verdict in what many observers thought was a clear case of murder triggered the Courthouse riots, one of the most destructive riots in American history. Over the course of three days, 56 people were killed and over 300 were injured. The riots ended the regime of political bosses John Roll McLean and Thomas C. Campbell in Cincinnati.

During the Great Depression

An early rejuvenation of downtown began in the 1920s and continued into the next decade with the construction of Union Terminal, the post office, and the large Cincinnati and Suburban Telephone Company Building. Cincinnati weathered the Great Depression better than most American cities of its size, largely due to a resurgence in river trade, which was less expensive than transporting goods by rail. The flood in 1937 was one of the worst in the nation's history and destroyed many areas along the Ohio valley. Afterward the city built protective flood walls.

Like all major cities in the United States, Cincinnati was proliferated by Americans, but also Ulster Scots known as the Scots Irish, frontiersmen, and keelboaters. Most of Cincinnati's longtime residents have kinships rooted throughout the Ohio-Kentucky-Indiana tristate and deeper. The first Methodist class came about in 1798, city residents for years already inspired by the Methodist circuit preachers; among Methodist institutes were The Christ Hospital as well as projects of the German Methodist Church. Cincinnati, being on the heartland plain, depended on trade with the slave states south of the Ohio River at a time when thousands of black people were settling in the free state of Ohio. Most of them came after the Civil War, and were from Kentucky and Virginia with many of them fugitives who had sought freedom and work in the North. In the antebellum years, the majority of native-born whites in the city came from northern states, primarily Pennsylvania. Though 57 percent of whites migrated from free states, 26 percent were from southern states and they retained their cultural support for slavery. This quickly led to tensions between pro-slavery residents and those in favor of abolitionism and lifting restrictions on free people of color, as codified in the "Black Code" of 1804.