A chalk line or chalk box is a tool for marking long, straight lines on relatively flat surfaces, much farther than is practical by hand or with a straightedge. They may be used to lay out straight lines between two points, or vertical lines by using the weight of the line reel as a plumb line. It is an important tool in carpentry, the working of timber in a rough and unplaned state, as it does not require the timber to have a straight or squared edge formed onto it beforehand.

A chalk line draws straight lines by the action of a taut nylon or similar string that has been previously coated with a loose dye, usually chalk. The string is then laid across the surface to be marked and pulled tight. Next, the string is then plucked or snapped sharply, causing the string to strike the surface, which then transfers its chalk to the surface along that straight line where it struck. Chalk lines are typically used to mark relatively flat surfaces. However, as long as the line is taut and the two ends of the chalk line are in nearly the same plane, the chalk line will mark all points that the string touches on or near that plane once snapped. The objects to be marked do not need to be continuous along the line. Chalk lines can also be used across irregular surfaces and surfaces with holes in them, for example on an unfinished stud wall. The primary problems associated with improper maintenance of a chalk line are string breakage due to excessive tension on the line, and degradation of the line associated with moisture contamination. Chalk lines and plumb-bobs are often sold as a single tool.

Chalk lines have been in use since ancient Egypt, and used continuously by builders in various cultures since. Continuing development of this simple but effective tool focuses on the coloration for the chalk or marking compound, as well as the outer case and method of handling. 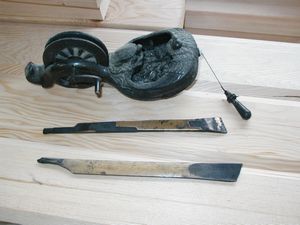 In East Asia, an ink line is used in preference to a chalk line. This is a silken cord, stored on a combined reel and inkpot called a ''sumitsubo'' in Japanese. Alongside the line reel is a cavity filled with ink-soaked cotton fibres, which the line is drawn through as it is unreeled. These ''sumitsubo'' are highly decorated and much-prized by their owners. As with many such tools, they're often made by their users while apprentices. On the completion of a major building, such as a temple, a large celebration or topping-out ceremony is held. As part of this event, a set of symbolic carpenter's tools are freshly made and presented to the new building. A ''sumitsubo'' is a traditional tool included with them.